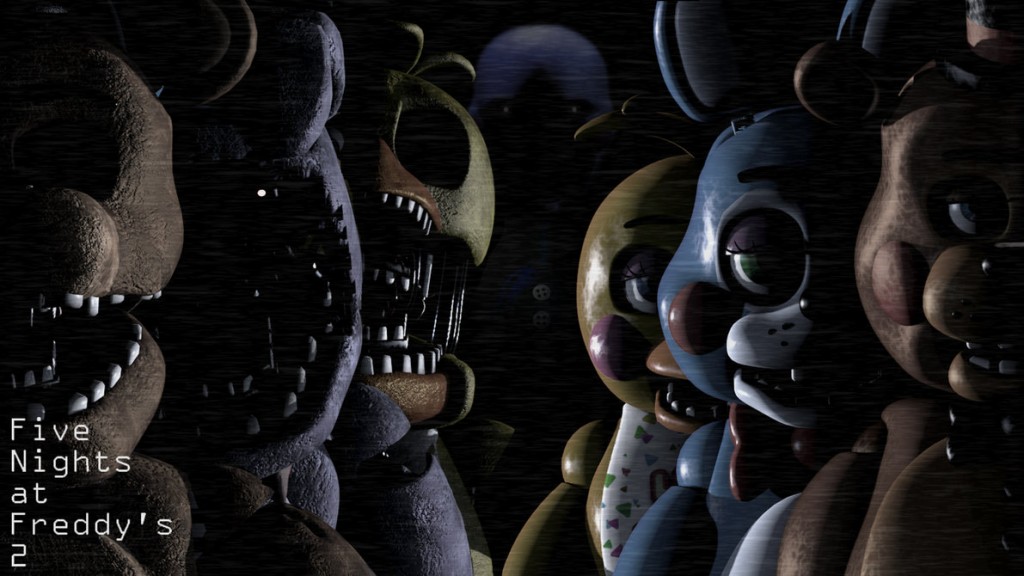 Credit to Carnage  and kanetain2 for the featured and above images, respectively.

What was said in CCG’s review of Five NIghts at Freddy’s still applies, except this time, I am convinced that the animations are possessed. This game may also cause insomnia in automatonophobics and/or children.

There are unavoidable spoilers to the first game, Five Nights at Freddy’s, so if you have yet to play and beat it, TURN BACK NOW! 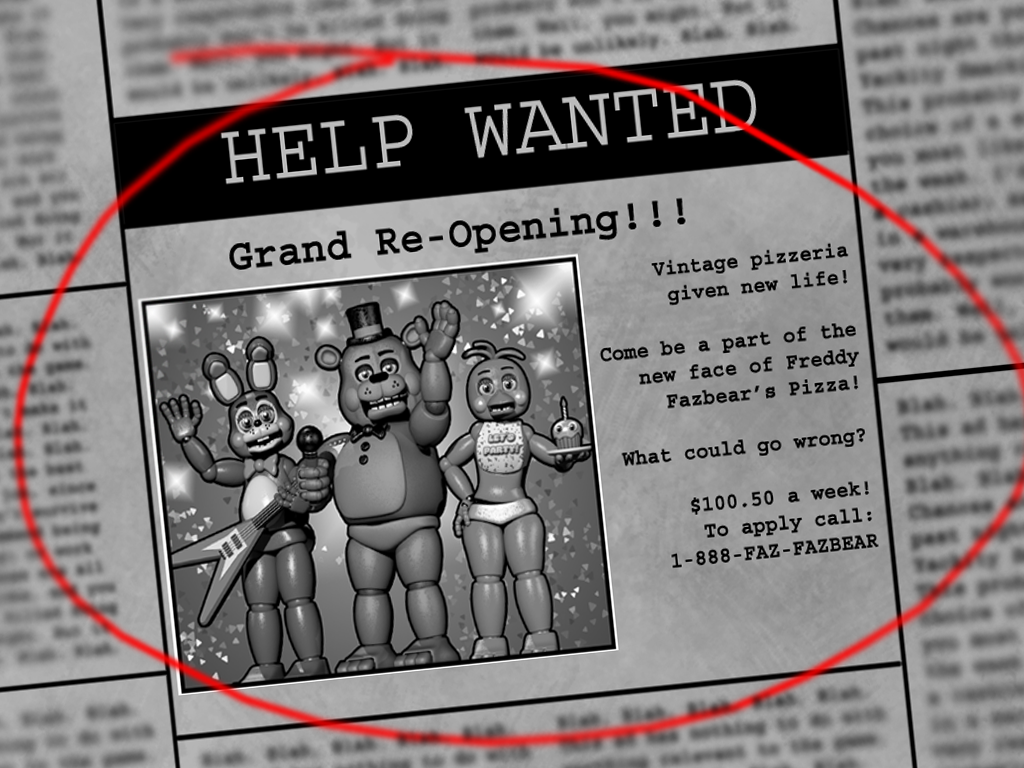 Awww yeah! Risk becoming fused with a metallic endoskeleton for just over $3/hr!!!

I do recommend that you read our previous CCG review of Five Nights at Freddy’s, because the premise of Five Nights at Freddy’s 2 (FNaF[2]) is nearly identical. Players take on the role of Jeremy Fitzgerald, the new nightwatchman of this new restaurant which actually turns out to be the old restaurant. FNaF2 is a prequel yet it is still also new because elements of the game reveal that there was another restaurant that even preceded this one, follow me?

Let me say that again: this second entry of the FNaF series is a prequel where players take on the role of security guard at night (because the previous guy complained about the animatronics moving at night—whatta wuss!) at the second of the three Freddy Fazbear’s Pizza restaurants. Without giving too much away, I will offer that FNaF2 provides more answers to questions posed in the previous game. Those answers are not necessarily more helpful or precise, but they are absolutely plentiful, and I would encourage those invested in this franchise to not spoil the game by looking up explanations before completing the game themselves. Unlike FNaF, the plot elements are not embedded in easter eggs such as the crying faces or the amorphous newspaper clippings, but actual minigames.

Once again, I point toward our previous CCG review of FNaF because the gameplay is similar: keep an eye on the animatroincs so that you don’t get jumpscared out of your seat and have to punch your monitor in self-defense.

Scott Cawthon is apparently a YouTube junkie, because he must have been paying attention to how many players (including myself) were cheesing FNaF by only using the cameras to see if Foxy was where it needed to be (or running down the hall) or the rooms right outside of the office for Freddy. As long as players checked the blind spots to the left and the right of the office with the light before flipping up the camera, Bonnie and Chica could never get into the room. It became clear to FNaF veterans (and perhaps Cawthon) that the limited power mechanic discouraged gamers from actually using any power at all. Of course failure to do so would risk a game over, but once gamers learned the patterns of the animatronics, it was no longer difficult to survive the night. 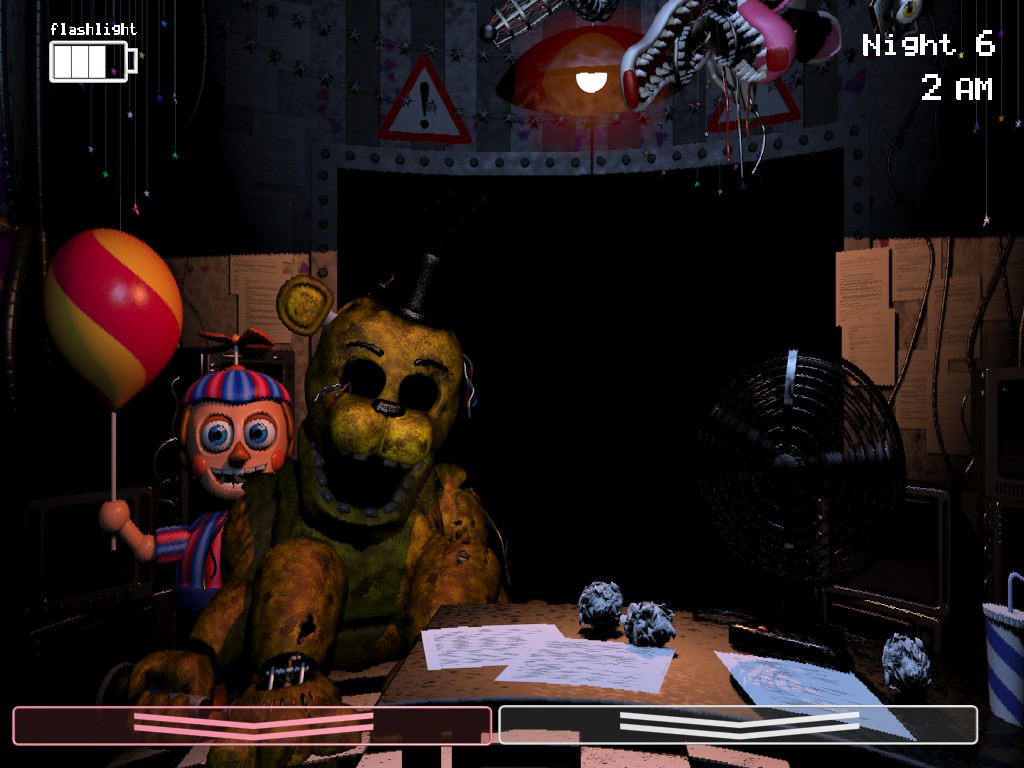 This is called the pre-GAME OVER screen.

So Cawthon changed quite a few things. Using the cameras no longer requires power, which should encourage players to actually use them. If that were not enough encouragement, FNaF2 introduces a new timed animatronic called “The Puppet,” which, if you ignore winding up its jack-in-the-box, will come and hunt your behind down. The Puppet behaves similarly to Freddy in the first game. It can teleport while avoiding cameras and getting the player whenever it feels like it. Also new is the flashlight, which many players wish they had in FNaF. Well, it’s still friggin dark, and its limited energy serves as a deterrent for frequent use. It, too, is necessary for survival because its primary use is to check the hall right in front of the player to see who is there, especially Foxy and its alter-ego, “The Mangle.” The last new defense mechanism is the Freddy Mask, which players can use to fool most of the animatronics into thinking that they are like one of them. Strangely, this works on Freddy.

I have to say that at first, FNaF2 elicits the same kinds of pangs of terror as the FNaF, but as I kept failing to live in during Night 3, limitations became more pronounced. For example, the necessity of winding up the Puppet gives players a false sense of security in that at least one of the eleven sources of terror can be “directly” controlled. Risk not winding up the Puppet at 5AM at your own peril; he may or may not come to kill you like Freddy after running out of power in the first game. Well, needing to wind-up the Puppet means that the camera must be used, and to my dismay, old Chica and old Bonnie do not peek into the room like Balloon Boy or Mangle before coming in. They teleport into the room, greeting players like, “Sup?” Put another way, winding the Puppet is a gimmick to set up jumpscares that is sold as a game mechanic. Clever, though shallow. 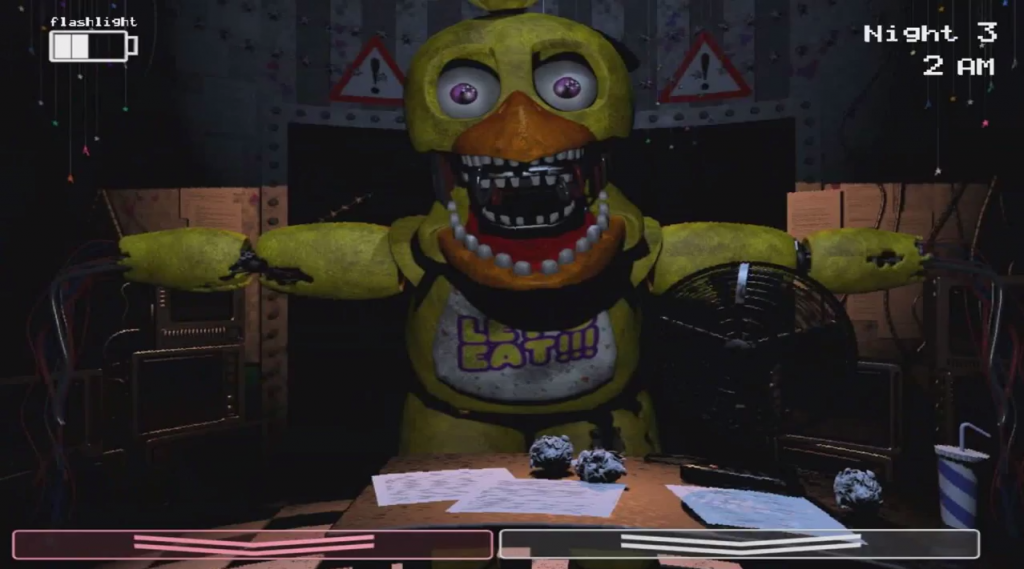 After getting a screen similar to the one above way too many times, I no longer felt scared because I knew the jumpscare was coming. Maybe it was Cawthon’s intent to tone down the horror of the game by providing more explicit clues as to when the player was about to get a robot in the face so that more people would be willing to play (dude’s gotta make that dolla!), but we don’t watch horror movies to laugh or remain unimpressed, but to be entertained at the prospect of saying an extra prayer before we go to bed and assuring ourselves that what we experienced is indeed fiction. Telegraphing the scares in this fashion (or in the above shot including BB, Golden Freddy, and Mangle, which is completely possible) dilutes the overall experience.

The only defense to finding one of the animatronics in the office like Chica here is to quickly switch to the Freddy mask and pray that it was fast enough to survive. I died so many times in Night 3 that I became bored until a few random benevolent gamers streamed me playing the game (thanks Steam Broadcasting Beta) and gave me advice that ameliorated the game in ways similar to tactics developed to beat FNaF. Once they told me this, it only took me one more failed attempt to conquer Night 3, and I did not lose again until Night 6.

Thus, FNaF2 deteriorated into a repetitive pattern for survival. Once again, I found myself questioning why I would ever check all the rooms the camera has to offer rather than simply the few key rooms because all eleven animatronics follow somewhat predictable patterns. I attribute this tragically limited but necessary way of playing the game to there being too many animatronics. FNaF is effective because there are only four (five if one counts some special conditions), and gamers spend most of the time wondering whether or not they should check the cameras, because the RNG of the animatronics means that on any given night, they could be aggressive or laid back. The tension or anticipatory fear of their approach makes FNaF scary. FNaF2 suffers from its own ADD—there is too much going on simultaneously. The objective shifted from creating fear of the unknown to attempting to overwhelm players with attacks from all sides.

Yo, I play DotA 2. My map awareness is formidable! Come at me, bro…er…robots!!! 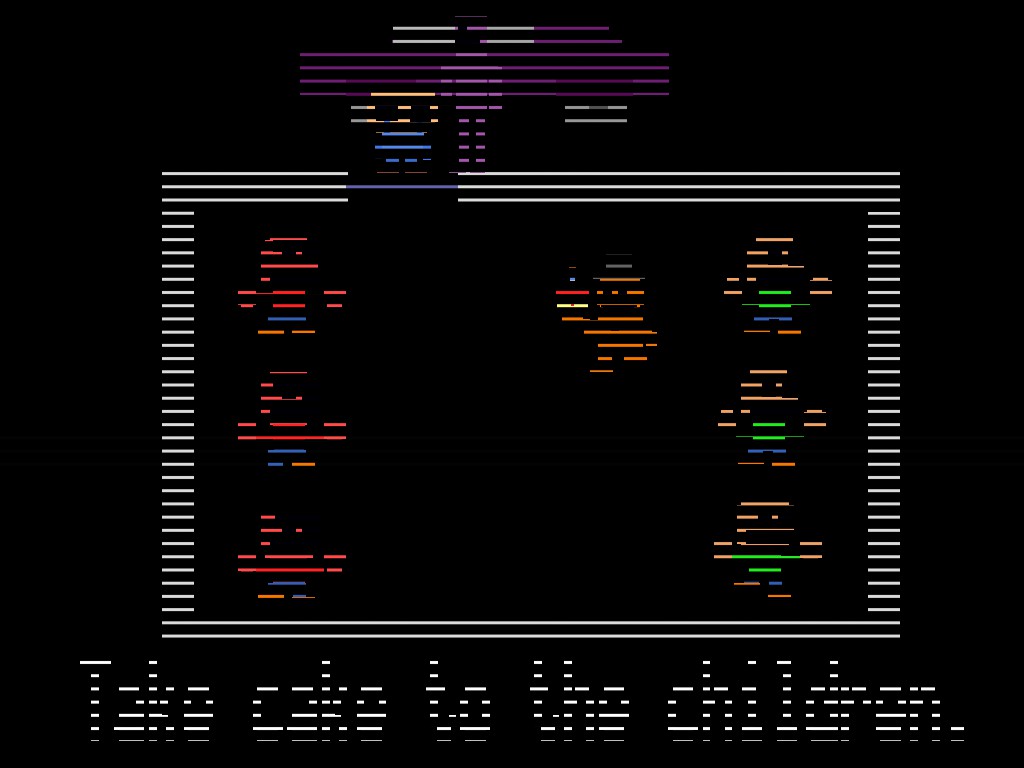 The base game is not as thrilling as it once was after pouring some hours into it. However, I found myself very much looking forward to the mini-games. They do not seem to have an obvious trigger, though I do recall them appearing most after losing (because Night 3 really kicked my butt). At first they seemed like arbitrary distractions, but pieced together, they reveal much, and make FNaF2 and its predecessor fun mysteries to decode. Fun, and really, really sad.

Like its predecessor, FNaF2 does not offer a high level of depth in terms of gameplay, which is fine for its genre (and price) because most who will want to play the game are only looking forward to the scares and the satisfaction of surviving one more night. Those who play games less frequently will most certainly find what they are looking for, while more experienced gamers will most likely develop tactics that will likely trivialize what FNaF2 has to offer. For the former and latter audiences alike, the revelations of the story are as cryptic as they are revealing, and they themselves are as good a reason to play as any.

The story revelations in FNAF2 are as cryptic as they are revealing, and they themselves are as good a reason to play as any.