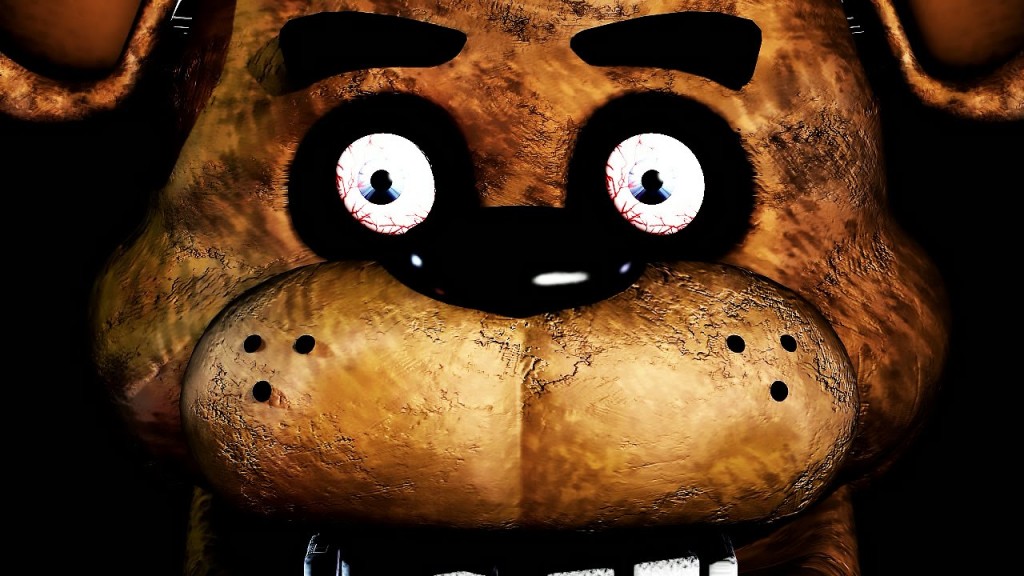 May cause insomnia in automatonophobics and/or children. Possible theory that the animitronics are possessed. 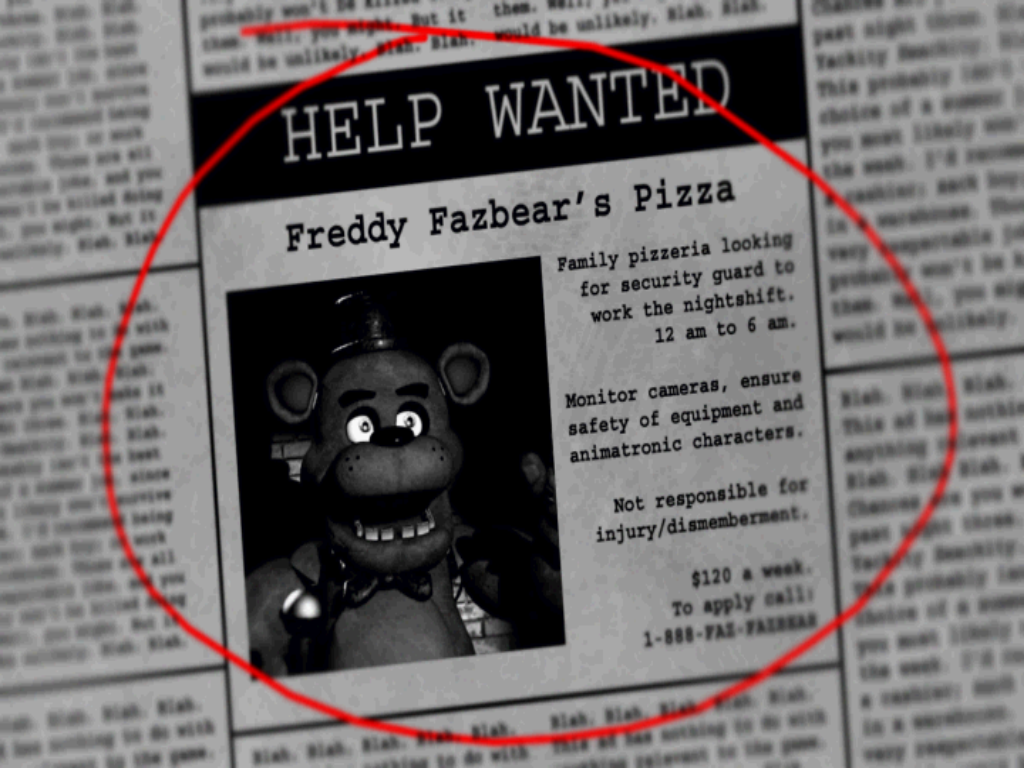 Players begin their employment as a security guard at Freddy Fazbear’s Pizza during the night shift from 12AM to 6 AM. However, the purpose seems to be to keep watch of the restaurant’s animatronics rather than the premises. The player’s predecessor has left voice messages providing valuable information concerning the machines, such as why they are allowed to move at night rather than during the day, and that the rules of attire at Freddy Fazbear’s demand that the player should wear an animal costume… and that the animatronic characters will stuff him or her into one should they prove successful in breaching the office where the player sits.

There are various other Easter eggs in the game that aid in the shaping of the (back)story such as newspaper clippings which suggest that Freddy Fazbear’s is where children go to disappear. There is also some information concerning “The Bite of ’87,” when one of the animatronics allegedly attacked a patron. Many fans have put together interesting theories, such as Foxy the Pirate Fox being responsible for “The Bite”; hence, its room displaying an “Out of Order” sign after being shut down, or that the previous security guard–based upon the voicemail left during Night Four–became the rare version of Freddy who crashes the game when he appears. I recommend reading about these only after progressing though the game for awhile.

As previously stated, Freddy and the gang want to make the player into one of them, and it can get messy in one of those costumes, given all the mechanics and circuitry inside. The player sits immobile in one pre-rendered room, and must check the security cameras to make sure that Freddy and the gang stay in place. Of course, they do not, so they have to be tracked lest they reach the player and deliver a jump-scare for a game over. Several mechanics are at play here besides being immobile, such as the limited power available for the player to use. The explanation for this is that the owner of the restaurant is too cheap to provide better lighting and energy over the course of the six gaming hours (or about nine minutes in real time) that the player is on watch; hence, the $120/wk pay rate. It is an effective gimmick because it forces players to be judicious with their power usage, lest the meter run down to 0%, triggering an automatic Freddy visit sequence. This management of power can also cause players to make mistakes by not looking at the cameras when they should, or looking when they should not, allowing Bonnie the Bunny, Chica the Chicken, or Freddy itself to sneak in for a jump-scare.

Spoiler Alert! Not really. Players will see this screen often enough that they will become either amused or frustrated by it depending on the proximity of 6AM.

The cameras do not provide lighting, and they are limited throughout the building, creating figurative “blind spots,” and a rush of panic when one of the animatronics can’t be found. There are also literal blind spots adjacent to the office, which can be lit using the light switches to the east and west of the player’s field of view. These are used to check if Bonnie or Chica are lying in wait. If so, the doors can be shut, but they are a considerable drain on power and must be used sparingly. I often found myself defensively shutting doors while Cicka and Bonnie could still be seen on the cameras, but running out of power by 4AM. Foxy especially drains the power when it sprints down the hall and bangs on the door. For added terror, Bonnie and Chica can jam the doors and break the lights during the latter nights of the week!

These mechanics, combined with the game’s ambiance–the deep metallic resonance of empty halls, the noises the animatronics make as they wander around the restaurant, and the hallucinations (which messed with my mind the most)–are what make Five Nights at Freddy‘s a scary game to play. Even after training myself to become callous toward the jump scares, the game possesses an unsettling spookiness, much like how one knows when a character is dreaming during a Nightmare on Elm Street movie; Freddie–or what happens to the dreamer–may not be scary in and of themselves, but the culminating anticipation that someone is about to get got is still effective in its purpose, which is to render people terrified of fictional events and characters. In the case of Five Nights at Freddy‘s, the idea is to wreak havoc on the player’s fading childhood and nascent adulthood.

Yes, they ARE looking at YOU, kid.

While Five Nights at Freddy‘s is not so scary that I am turning off the sound or playing during the daytime with my wife present like I did with Dead Space, it does provide a good few hours of quality distraction. Those of us old enough to remember the “sabotage” style e-mails that would send friends, family, and co-workers to a flash site requiring them to look closely at the monitor, and/or turn up the volume before a sudden scare, will be familiar with this game’s methods. Others may be turned off by the lack of options, the freeze-frame style animation, and pre-rendered effects. I do have to admit that I did not care for the RNG that the game utilizes to randomize the placement of the bots, because sometimes I found myself needing to keep the doors shut because some combination of Bonnie/Freddy/Chica would camp the doors and I would lose power waiting.

Some of our readers may be aware that, at the time of this writing, there is already a sequel, given the success of this game. We will be checking that out soon here at GUG/CCG. In the meantime, if you have not already, check out our exclusive interview with the developer of Five Nights at Freddy‘s, Scott Cawthon.

Fans taking a break from the Resident Evils, Silent Hills, and Dead Spaces of the world will find Five Nights at Freddy's refreshing in its simplicity, yet also challenging to survive unarmed through some eerie evenings.