Not much.  As far as language goes, this reviewer heard one use of “h***” and an uncompleted “son of a…”  Enemies bleed neon-green in copious amounts when punched/kicked.

“STARSHIP INFINITY SPECIFICATIONOver 150 miles long and nearly 30 miles in diameter at its widest point, the progress of The Infinity’s construction at the Tranquillity Ship Yards on the Moon could clearly be seen from Earth. The revolutionary ship requires a crew of 5,000,000 people to keep it running and is designed to house another 10 million people as general population ready for the colonisation of new worlds.”

A ship 150 miles long?  A crew of 5,000,000 people and another 10 million passengers? (Previously the description on Steam said 1 billion, but someone was nice enough to do the math of the dimensions of the spaceship and inform the developers that number was physically impossible, so it was changed).

This sounds like a joke, but it is most definitely not. Developed by small indie studio Wales Interactive, Infinity Runner is a game that looks great in the trailers that have been released. However, the game is very different than what it appears to be.

If I was to describe this game using others, I would call it a System Shock 2-esque, first-person Temple Run, re-skin with an attempt at a story involving werewolves.

Why do I say Temple Run, do you ask?  The game is ON RAILS.  Which is not at all made clear in any description offered by Wales Interactive that this reviewer has come across.  In fact, a question regarding this very matter was asked by a member of the Steam community.

Normally, the developers of the game are very quick to answer questions about their game. This question was posted on June 26th, 2014, and was unanswered by the developers as of yesterday.

The similarities to Temple Run do not stop with the rails.  Players must also collect “data packets” that are in lines while they are running. There are even power-ups such as a “data magnet” are available in the multiplayer and arcade modes (both of which we will get to later). 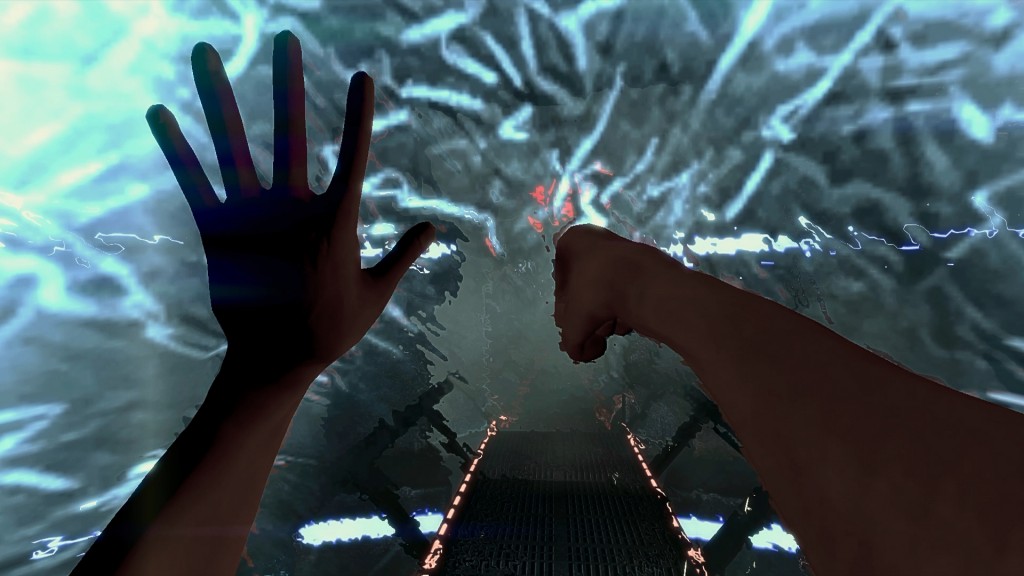 You would think cryostasis tubes would have an “open” button

The story mode of Infinity Runner begins with the player character breaking out of cryo-stasis.  A voice in his head tells him to run, and, due to the many explosions around him, he proceeds to do so.

The player character is then running continuously throughout the game, but no explanation is made for why exactly he is running all the time, even when there is not something deadly (such as an explosion or a werewolf) behind him.

Sometimes, players are running on all fours.  Without giving away too much of the “story”, there are certain instances when the player becomes a werewolf.

However, this game takes all the fun out of being a werewolf in space.  Everything is done for you when you are a werewolf.  Players do not even get the minuscule satisfaction of pressing the keys WASD and right/left mouse to trigger a QT event (which is what the normal combat consists of).

Honestly, the best part of the story mode is the soundtrack, which conveys the correct mood for the setting of the running escapade. 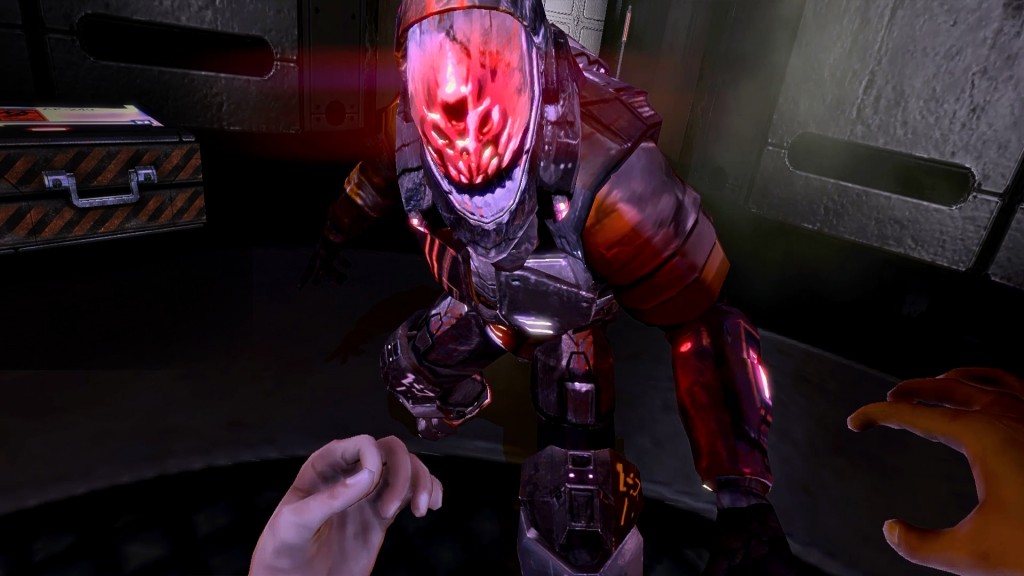 Dude, your brain is hanging out.

The two other modes, arcade and “multiplayer”, are a tad bit more appealing as they do not attempt a story.  In arcade mode, one can truly run infinitely.  In my opinion, this game should have been the arcade mode and nothing else.  It is a fun little exercise and players must be quick-minded to avoid the randomized obstacles.  The multiplayer is not something I would call “multiplayer”, which is the reason for my repeated use of quotes around that word.  Players do not actually see the people they are playing against.  Instead, every player in the group (up to 32), is running in their own world.  Indicators on players’ screens allow them to see if what place they are currently in based on their location in their world relative to the other players’ location in their worlds.

Finally, the game looks… fine.  There is nothing special about these graphics; they look about what you would expect from an indie studio.  The game is definitely not all bad, as it is a fun endless running game like Temple Run.  If you enjoy those types of games, and are willing to pay 9.99 USD for one, Infinity Runner will be released on July 14th, 2014 on Steam and the WiiU at a later date.  The game can be found on Steam here—-> BUY HERE