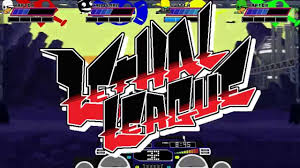 Lethal League is a hard game to describe. It’s a fighting game, but not in the same vein as a Street Fighter or Mortal Kombat. Instead of hitting each other until the health bar is gone by using combos and other tactics, Lethal League has a baseball that each player hits to try and knock out the other players. Lethal League, in many ways, is closer to Super Smash Bros in that it is a party-style fighter best played with multiple people in the same room. The game only has five characters, with each character having a special move that can be activated after you have hit the ball four times. This is the only real variety (besides looks) that you see in each character. That doesn’t mean the characters don’t have personalities. You have characters like Switch, who is a skateboarding robot, and Candyman, who is a little crazy. Their special moves reflect their characters; Switch has a kickflick move with his skateboard, and Latch, who is a mutated alligator, will put the ball in his mouth and the spit it back at a faster speed. With each hit, the ball moves faster and faster until the ball is just a blur on screen. That is when it gets real crazy. I played a game where the ball got up to 2000 mph; with each hit the screen changed colors. It was an awesome moment in the game.

The game has a challenge mode where you fight your way down a list of enemies until you eventually get to a boss character. Aside from that, there is no real story mode or traditional arcade mode for each character. It does have a training mode, which really only explains that you hit ball and you have a special move, but I do recommend going through the training. It will help you get a good feel for the handling of the game. You get experience points with each challenge mode or multiplayer game. All that it does is unlock new costumes for each character. 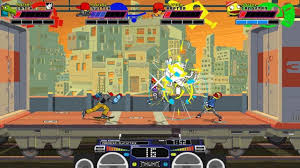 The game is pretty bare on extra features and modes. Normally, I would say that is a bad thing, but sometimes simple is best, and that is where this game shines. It knows what it is and it doesn’t try to add anything that is not needed. My biggest complaint has been that the online play is almost non-existent; it usually takes several tries to find a match, and when I finally do, there has been really bad lag several times. Even with the lag problem, this game has been so much fun to play against other people. Once again, this game really shines when you’re in a room of people.

The game has a pretty decent soundtrack, especially if you’re into the house music/techno sound. The art style has an almost cell shaded look to it, with very bright and vibrant colors that just fit into the fun feel of the game (even if some of the levels make me think the world of Lethal League might be pretty messed up and not a place I would want to live in). I feel this is an example of a game that is doing itself a disservice by being on PC.  Hopefully, it will be released on consoles soon; it will be a perfect fit for the current gen systems.

Overall, Lethal League reminds me of games like Dive Kick. It’s a quirky game that doesn’t seem to have a lot of depth on the surface. In both games, you basically only have two moves, but as you play, you see that there is actually a lot to the game. You learn to enjoy it more and more. If you have the ability to connect your PC to the television with a few wired console controllers, then this is a great game to break out when guests come over and you’re looking for a game anybody can get into and enjoy. If you don’t have that setup, hopefully this game will come to consoles soon. It is a fun game to play with friends.

Lethal league is a great game for the person who is always entertaining friends. It is a low cost game that is perfect for multiplayer.