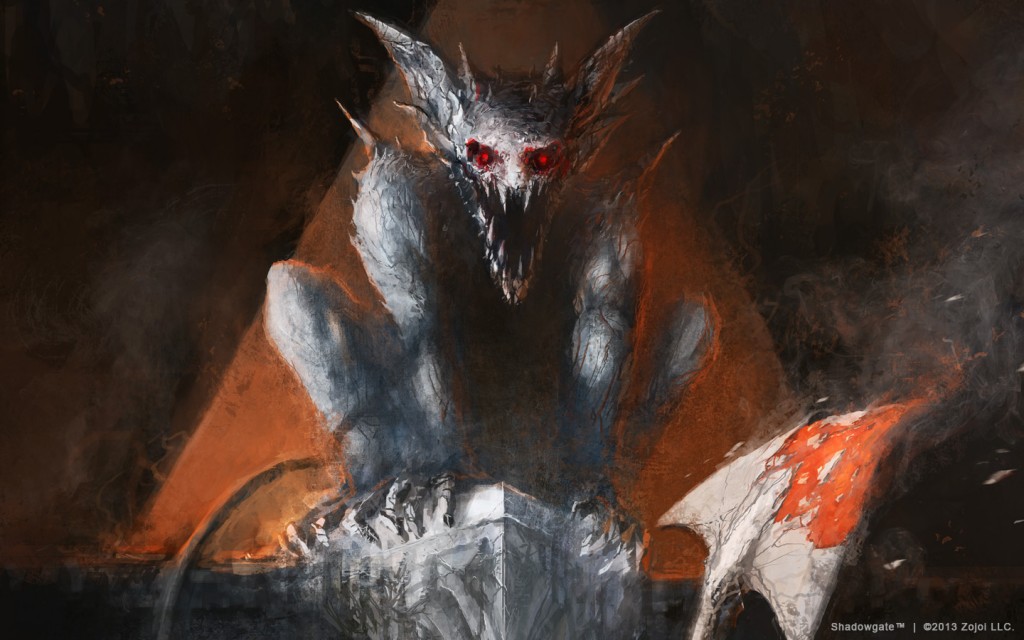 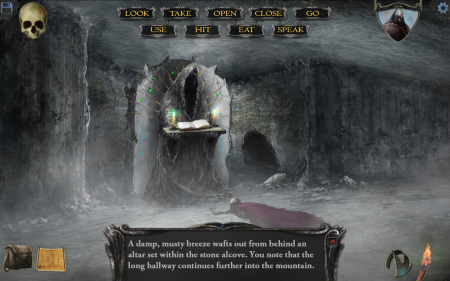 The story of Shadowgate is the same as it always has been. You are summoned by the wizard, Lakmir, to The Living Castle, Shadowgate, to put a stop to the demented designs of the evil Warlock Lord. However, in this 2014 remix, our hero actually has a name: Jair Cuthegar. Like in the original game, he is the only descendant of the line of Cuthegar, who holds the potential to wield the ancient power necessary to defeat Talimar the Black–the also newly named Warlock Lord–and restore peace to the land. As you play through the game, you receive pieces of lore regarding our hero, Lakmir, Talimar, and even castle itself. Paying attention to the scraps of information you obtain throughout your travails will prove vital to your success. 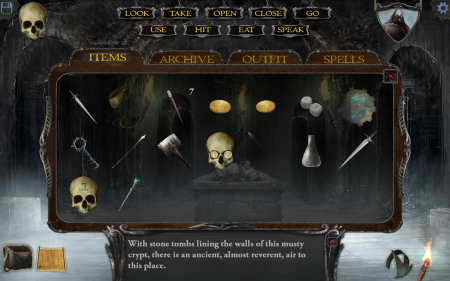 Inventory management has been streamlined. You can see and examine all of your possessions much more easily. No more frantically scrolling through lists to find your torches!

Unsurprisingly, your experience playing this new adventure is nearly identical to what you went through in the original game. You move about the environment, collecting objects, solving puzzles, and trying not to die while keeping your torch lit. However, in this new journey, there are some key differences. For starters, you are only given one torch, which you must keep alight or risk a lethal injury whist prattling around in the dark (okay, that part is identical to the original game). Additionally, like the first game, there are a finite number of torches to be had. Furthermore, the higher difficulty settings make your torches burn faster. Moreover, every single action you take, aside from using the ‘LOOK’ command will tick time off of your torch. As your torch light dims, the screen will dim along with it, realistically lowering the illumination in the room. 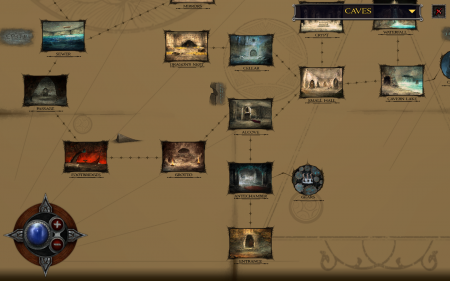 You now have a map that keeps track of the rooms you’ve located, and which rooms connect to which, to keep you from becoming lost. It even records noteworthy features of rooms you’ve visited.

The silver lining to all of this is that if you happen to be in a area with its own light source, your torch can burn down without you being plunged into darkness. The “torch emergency” music will still blare in your ears, but you can move about, perform tasks, and otherwise operate unhindered… so long as you stay in that room. Enterprising players may find a way to take advantage of this.

One potentially mind-numbing facet of this game is when you start to become painfully aware of how limited your torches and time are. Once you internalize this, you will find yourself saving the game and then embarking on a series of steps to solve a given puzzle, then reloading if it doesn’t work, ad infinitum until you find the solution, just to save on torch light and time. While this can be an effective strategy, it has the side effect of making the game feel a little too repetitive at times.

Oh, one final thing: You are being timed. And no, I’m not talking about the torches again. There is a global, invisible time limit, and it is within this time that you must find what is necessary for your confrontation with the Warlock Lord, and take him out. His plans are constantly in motion while you are exploring the castle, and if you lollygag too much, his evil plans will succeed without you ever even having seen him. Prince of Persia anyone? 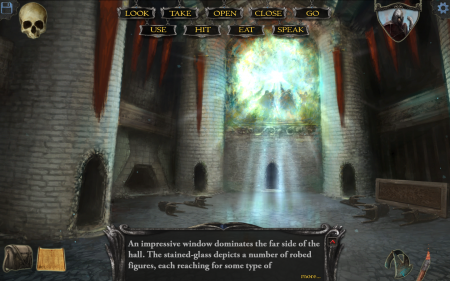 One room; four doors. Which way do you go?

Shadowgate has been revamped from the ground up, with virtually no image from the original game having been spared. While in terms of overall layout, it may seem similar to you, artistically, it is anything but. In addition to some brand-new rooms for this release, such as the circle chamber, every classic room has been given a complete graphical overhaul, with expertly blended colors, for an overwhelmingly fresh feel. In fact, one of the features of this game is the ability to adventure in immersive mode, which completely hides the HUD, and allows you to peruse the environment using keybinds.

In addition to the veritable visual novel that this game has become, there are may animated elements to appreciate. Torches burn and flicker, waterfalls rush, and monsters within the environment are similarly life-like. Your spells are also animated, each having their own colorful effects. 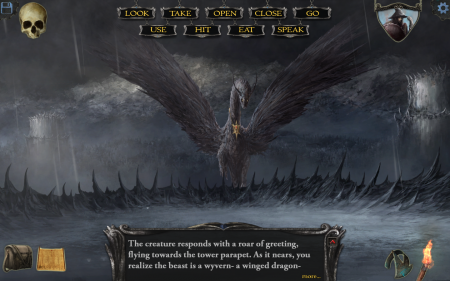 My, my, my, he looks rather hungry, wouldn’t you say?

The original score of Shadowgate has received the epic remix treatment. In fact, I sprung for the highest pre-order just so that I could have all of the new songs on my PC for recreational listening. Each song from the original game is recomposed beautifully, and you still experience the music in situationally appropriate circumstances. As I alluded to before, the default music for the room will abruptly shift to “torch emergency” when the light from your torch begins to dwindle. Our old buddy the Grim Reaper also had his unforgettable theme orchestrally remastered, which is a touch as it happens, because you’ll be listening to it quite a lot. As an added bonus, all of the original 8-bit tracks are included, if you care to adventure in Retro Mode. You can activate retro music from the settings menu.

Other audial features of this instant classic include ambient sounds, action sounds, and voice-acting. You hear water flowing or dripping in areas where it is present. Thunderclaps can be heard as you complete your quest. Tremors are heard and felt when you are in the catacombs. Your spellcasting is accompanied by magical sounds. Using objects on the environment produces fitting sounds as well, such as a hacking sound when you slice through overgrowth.

In my review of the original game, I stated that the writing in Shadowgate is an example of some of the best writing the world of gaming has to offer. While I certainly still believe that is true, I must say honestly that Zojoi did a tremendous job in expanding their already remarkable game to more fully flesh out the characters of the original. You uncover lore that sheds new light on topics that could only have been guessed at after playing the original. There are also several cut-scenes, most of which involving communicating with Lakmir as you make your way through the castle. These are voiced rather well, by voice actors that may sound familiar to some people.

The game contains references to higher beings, most notably being the namesakes of several stars, but there is also an achievement for praying in front of every shrine. It is not clear to whom or what these various statues are dedicated to, but you can be reasonably sure that this game does not take place within a monotheistic setting. The practice of astral projection is used as well, albeit through magical means.

As a hardcore fan of the original Shadowgate, I can say with confidence that this game lives up to its predecessor in even conceivable way. With variable difficulty, nearly anyone can sit down and have a satisfying, if somewhat aggravating, gameplay experience. 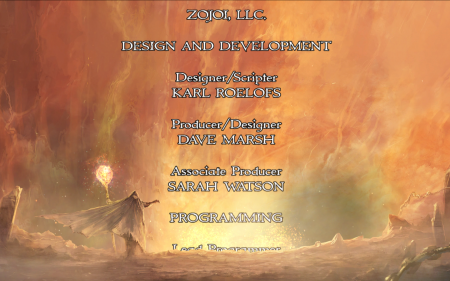 Shadowgate practically oozes replay value with its three levels of difficulty. The music is hauntingly beautiful, the environments are detailed & enthralling, and the story truly speaks for itself.