There isn’t really a storyline or anything in this game that could cause anyone any offense. It should be safe for all Christians.

There isn’t really much need for a story in this type of game. Like other games in the series, you battle Dr. Eggman’s robotic baddies as well as an occasional boss. There are a number of unlockables, including classic series characters Tails, Knuckles, Shadow, Amy, Blaze, Silver, Rouge and Cream, as well as upgrades that allow you to do things like run faster and bust through obstacles for a period of time.

You don’t have to make any purchases to collect the characters, but it does take a lot of game time to get enough items to purchase them. There are promotions to help you unlock characters from time to time as well. For example, during Halloween there was an event where you could collect enough pumpkins to unlock Shadow, and Amy Rose was given away for a period of time as well. There are also advertisements that come up between rounds.

You run on an endless path as you dodge obstacles, collect rings, and use power-ups 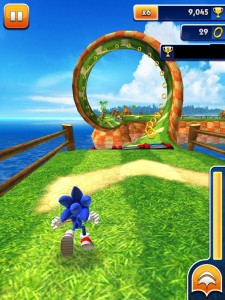 while beating bosses and robotic animals. The controls are simple; you swipe your finger the direction you want to go. Up is jump, left and right cause you to move that direction, and swiping down causes you to turn into a ball and roll through enemies.

You can complete goals to get more red rings that you can use to unlock characters and power-ups. These goals can range from “collect X amount of rings” to “play X amount of consecutive days.” You also get a free daily spin that will give you upgrades, power-ups, and even (occasionally) a free character. The rings you collect can be used to purchase upgrades and power-ups as well (though they won’t land you any characters).

The graphics for this game are great. The characters are a good representation of modern designs, and nothing comes across as too cheesy or muddy. The animation of the game is smooth and typically represents the character well. Sonic runs in one of his classic stances and Shadow glides on rocket skates, for example.

The music in this game isn’t anything spectacular. In fact, I typically just turn it off and leave the sounds on to keep the game quiet. It isn’t particularly bad though.

While the game isn’t incredibly engaging, it is ideal for when you only have a few minutes to burn. It doesn’t do anything to hurt fans of the Sonic franchise, and it doesn’t have any technical issues to cause the game to be any less player-friendly. Great for a free, casual game.