The first of the 3-Game partnership Nintendo and SEGA formed brought forth a Sonic Game like no other. But is that a good thing? The Day-Time Stages of Sonic Unleashed were praised highly, by Sonic Generations that formula wasn’t enough for the Sonic Fan-Base (Mainstream Fan-Base, I might add. I am a member of the fan base and I love Generations), in fact, they were bored of it. While some may see this NintendoxSEGA relationship as Sonic Spindashing down pipes and Mario running in big loops, we actually got a title with some already tested-and-proven gimmicks (Like Wisps from Colors and the Spindash from the earlier Genesis titles) along with the all-new tricks( Such as the Parkour tricks and the summersault attack), meaning you won’t find dull, bleak, overused Level designs. You’ll even find yourself snowboarding at times. Also most Levels are JAM-PACKED with content. Most levels take around 5-10 minutes (and sometimes more) to complete, and this is usually no easy task either. Road-blocks like Badniks guarding the Springboards and areas where destroying things gives Sonic the ability (with the Wisps’ power) to go to the next area prevent you from just boosting through the entire level in 30 seconds. And did I mention that the boost has been removed all-together and replaced with Sonic’s famous Spindash? So instead of the level relying on collecting Rings/destroying enemies to get boost energy, you are focusing more on making precise jumps and running against walls to get over gaps. And you’re not just blowing through all this either. You hold the Right Button to make Sonic run faster, and his top speed is enough to enjoy the level without it being slow in most cases. Also instead of the view being side-scrolling 2D, most levels are viewed full-on in 3D with the Genesis-era-style 2D Platforming skillfully placed throughout.

The level design is something totally new to Sonic the Hedgehog; instead of running normally through realistic areas with normal gravity, we have levels located in “Lost Hex” , a giant floating planet with gravity that will keep you from constantly falling into a pit. The gravity pulls in such a way that combines nicely with the level . These levels aren’t fully flat, they are curved and the gravity pulls Sonic towards the platform itsself. It pulls in such a way that if Sonic jumps to the side of a curved area, he will land flat-footed with the camera following Sonic.

We get all our favorite Classic Badniks along with some new ones (including big ones that take many hits to defeat) so you’re not fighting weird, fuzzy monsters like in Sonic Unleashed . And while I’m mentioning monsters, how bout them Deadly Six? Well, they’re here. While that originally made me not want the Game, I eventually became interested. While the big-yellow guy (Zomom) is childish, dim-witted and obese , the Boss Battle is still pretty cool. But why is it cool if you’re fighting a fool? Well, these guys are controlling Robots that Dr. Eggman created for them, so it’s much more fun than fighting a monster alone. I can’t remember these guys names’, so I took a list from Sonic Wikia ( see http://sonic.wikia.com/wiki/Deadly_Six ) . Here’s a list of the Deadly Six and a bio/review of them (the pictures came from the recently mentioned web page) :

A purple freaky guy whose voice alone will tell you he’s a psycho. He fights Sonic on a Moon Mech which tries to crush Sonic, but the shock from the slam into the ground shakes up Zazz, allowing Sonic to attack him.

As I stated before, he is ignorant and childish. But he’s also a brute to make up for it. His Boss battle involved him on a fire-breathing head-shaped Mech . Sonic must attack the Mech from behind to defeat Zomom.

Sort of a Mister Miyagi type guy, Zik does not use a Mech, which is interesting, seeing as his Boss Battle takes place after the Six are freed from Dr. Eggman’s control. He makes a shield of giant fruit and spins it to attack Sonic. He also rolls Giant fruit at Sonic, some of which contain Wisps. Sonic can use the fruit and the Drill Wisp to destroy Zik’s shield and attack him directly.

Zeena : A very ugly female Zeti (all of the Deadly Six are Zeti) that fights Sonic on a giant snowman Mech. Hitting the Mech enough times will grant Sonic with a Lightening Wisp which he can use to attack Zeena.

A gothic-looking guy who’s really negative and slightly sadistic. He fights Sonic with a giant Owl Mech that fires Lasers . In his Boss Battle Sonic must launch himself at him using a canon, but there are fake Owl Mechs everywhere, so you must use the DS Gyros to navigate the canon blast to the correct Mech. Once it’s knocked down, Zor will fall off and Sonic can attack him directly.

The leader of the Deadly Six, and the only one I really like. He pilots a Giant Snake-like Mech that is loaded with weapons. The entire battle takes place with Sonic falling in the sky. Zavok will fly around with the Mech to attack Sonic. Sonic can only hurt him if he can get 3 targets on him or attacks with a Laser Wisp.

The last three Levels involve defeating these Bosses once more. After that Dr. Eggman turns against Sonic (They had formally formed an alliance, but that will be explained in the plot).

Tails and Sonic, while chasing Dr. Eggman who is carrying a capsule of animals, discover the Lost Hex. It is revealed that Dr. Eggman is using the Deadly Six to fight off Sonic while he drains the Earth’s Energy. He uses a special conch to restrict the Deadly Six’s mind power, as they can control Eggman’s Robots with their powerful minds. Eventually Sonic unknowingly knocks the conch out of Eggman’s hands, freeing the minds of the Deadly Six. They then take control of Eggman’s Robots and conquer the Energy-sucking machine he was using. Eggman tells Sonic that the machine will destroy the world below and that there is no way to shut it off unless he can reprogram it. Sonic wants to smash it, but Eggman tells that it will create a huge explosion (dangerously huge). All the while the Deadly Six use the Energy machine to make themselves stronger. They send out a fake Egg Prison (thing the Animals are trapped in) that is a trap. Not knowing it is, Sonic tries to open it. Tails runs to warn him, but is caught in the trap that was set for Sonic. The Deadly Six planned to Roboticize (turn into a robot) Sonic, but do it to Tails anyway. Fortunately, when the Six left the area where Tails was being Roboticized, he messes with the computer next to him, altering the Roboticization process.  Later the Deadly Six destroy the bridge Dr. Eggman and Sonic are walking on, with Eggman seemingly falling to his death in the lava below. Sonic fights the Six again, and they try to turn Tails on him, but he instead turns on them, firing at them with his new laser-arm. After Sonic defeats the Deadly Six, Eggman emerges in a giant Mech shaped like him. He reveals that he did not die, but instead shut down the Energy machine and used the Energy to power his Mech. As always, he plans to conquer the world, sarcastically pitying the damage already done there by the Energy machine. Sonic defeats Eggman, world back at peace.

Main Review (the part you skip to because of colorful pictures)

The Game Play in SLW is MUCH different than that of all the other Sonic Games. You will find Sonic slowing down some for things like pushing an apple here or there to proceed .Many claim it is similar to Mario Galaxy, but the only Mario I own is for the NES. 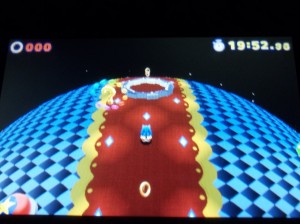 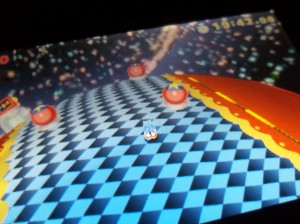 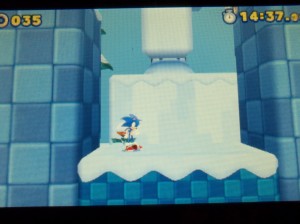 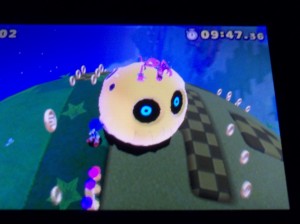 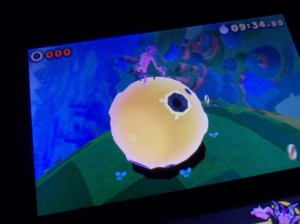 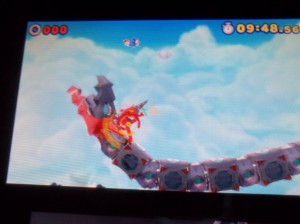 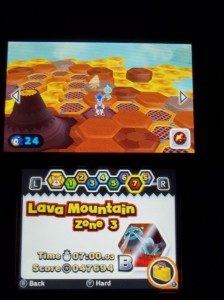 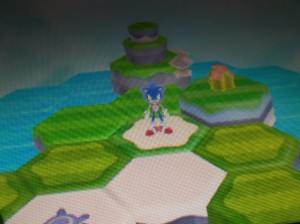 Snowboarding, Homing Attacks, Summersault Attacks, Wisp Powers, and some of the old elements I’ve hoped SEGA would go back to (like the Classic Badniks and Spindash), this Game really combines the old with the new. Also you will find Sonic slowing down some for things like pushing an apple here or there to proceed. But almost no Game is without its imperfections. Sometimes there will be levels where all you do is search for something like a button to push to move on to the next area and do it again. Frozen Factory Level 3 is nothing but that. It is also made harder by slippery ground, constant persistent enemy attack, having to roll a snowball so it will fill a hole, stuff like that.

Being a Sonic Fan of around 11 years, I can say that this Game is like a Sonic oddity almost. Taking the fun and memorable elements and putting them in a whole new environment. It’s not like they threw out every Sonic element like they did in Chronicles , but even that was enjoyable to some extent.

The cutscenes are cool. Quality animation, nice plot, good way to introduce the next enemy or whatever. From the looks of it, the cutscenes are the same ones as the Wii U version, but viewed in lower resolution, like what Sonic Colors did with the DS version. While there is some annoying stuff, most is great.

The only Sonic Game so far that has had foul language was Shadow the Hedgehog, and SEGA was burned so bad by it’s reviews that they have ran from it. So ever since the Games I’ve played have been clean, and this is no exception.

The only things here are your average “I’m gunna kick your butt ‘n’ stuff!!” threats, peril to the world, cartoon violence like explosions, knocking people down, you know. None of this at all is in any way bad.

Zomom is stupid.  Once he spit when he spoke, is obsessed with eating, and a dimwhit. Zeena is worried more about her nails than a battle with Sonic. Zazz can go a little too crazy. And of course Cubot and his silliness.

So is Sonic Lost World for everyone? That’s not up to me, but you could at least give the free demo (in the eShop) a try .

With a Game almost entirely new while holding on to the old elements, Sonic Lost World could end up in your supermarket buggy -but that part is up to YOU.