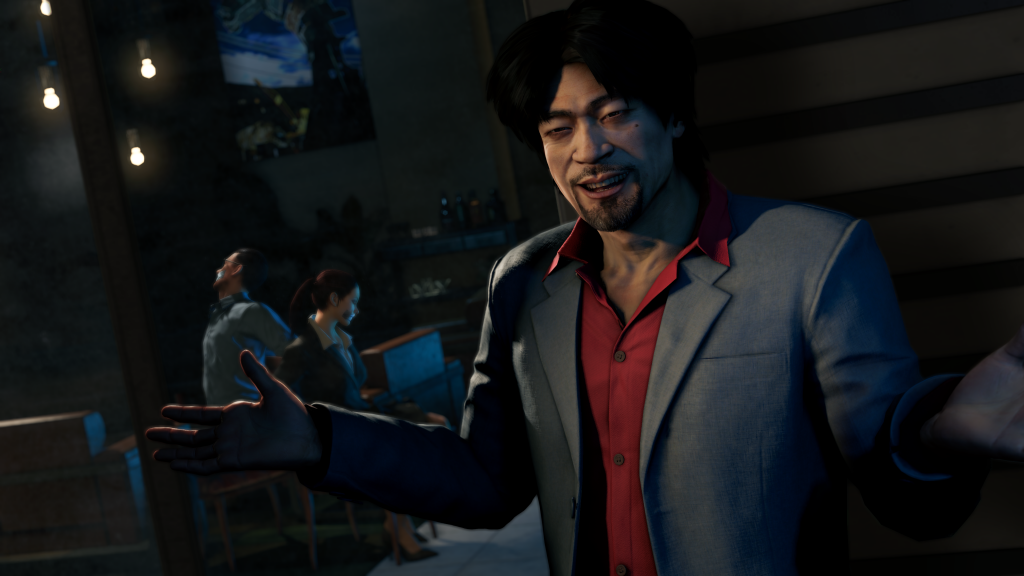 Aiden Pearce is a hacker. He took a job to rob people at the Merlaut Hotel. Your hacker teammate Damien Brenks gets a little greedy and tries to steal information. This act gets both of them on a hit list. Damien gets his leg broken and permanently damaged. Aiden does not fair as well. The person hired to scare Aiden runs Aiden’s car off the road. But Aiden’s niece was in the car with him and dies in the car crash. This sets Aiden off on a revenge trip to find out who killed his niece and make them pay. The story of Watch Dogs is the run of the mill revenge story. There is a lot of betrayal by those Aiden surrounds himself with. Aiden is played a little flat but the supporting cast is great. Especially Jordi Chin. Too bad he is not in the game more. 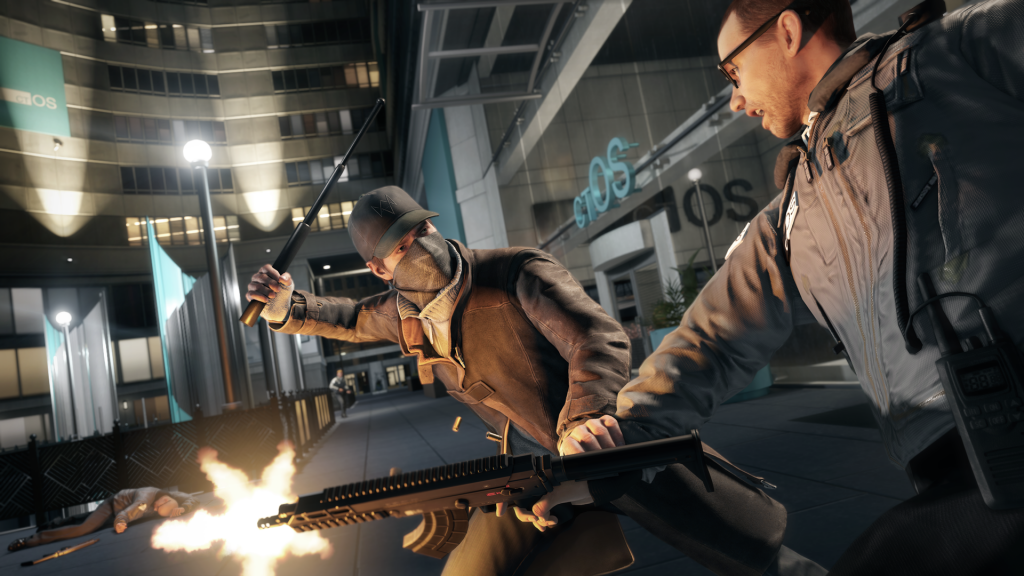 There is so much to this game. I am sure I will miss telling you about something about this game as it is so big. You play as a hacker and you can literally hack the world. As soon as you hack each ctOS terminal for a region you can hack everything. You can hack phones to get money and information and find crime. You can hack cameras (you will do this a lot). You can piggy back from camera to camera to surveil an area. You can hack things from the view of a camera. This can be to open gates that you can’t see from Aiden’s point of view, distract guards, disable guards communications, activate explosives on guards, explode pipes and explosives and hack computers. In a lot of situations you can hack into a secure facility without having to step foot into it. Of course you can also go in guns blazing and kill all the guards to clear a path for Aiden to personally hack the facility. 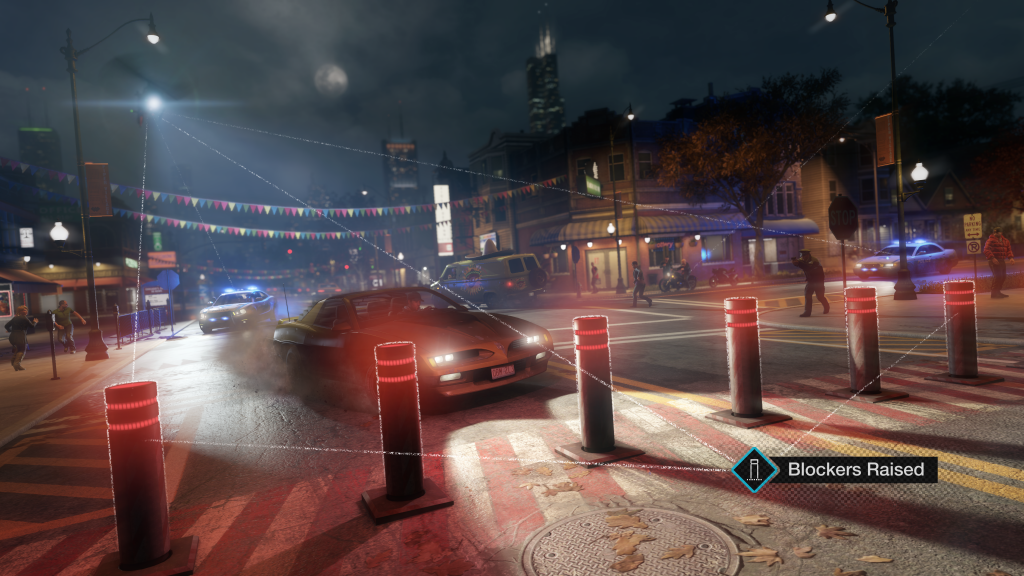 Car driving is another thing you will be doing a lot in Watch Dogs. Whether it be diving to get to a contract or to the next story mission. You can fast travel to places you have been before. The cars handle differently from car to car. Overall the cars handle ok. They don’t handle bad but don’t expect Gran Torismo or Forza. The car chases are the worst part of the game. They require you to run another car off the road. The trouble is once you run the car off the road the game wants you to kill the person that gets out of that car. Best part of the chases are that you can hack lights, man holes, gates, spike strips and blockers. These all help to disable cars you are chasing and cars that are chasing you. There are a lot of cars in this game. You can steal all of them (either GTA style by pulling out the driver or by hacking a car on the side of the road by hacking them). You can also order cars from Jordi so you don’t have to steal them.

This game is also a third person, cover-based shooter. Here is where the game is great. Aiming works great. If you pop out of cover the game will auto aim on the enemy closest to your reticule. There is a wide variety of guns a devices to use in this game. You can build the devices with parts you find around. These devices range from explosives to a blackout trigger. All this devices will either help you evade enemies or engage them. Using the cameras you can tag enemies and see them on the mini map and through the walls.

The game does fall into some boss battle tropes. Enemies that pop out of nowhere. Over powered enemies that take a tonne of firepower to overcome (unless you get a special ability in the upgrade wheel).

There is a lot of other activities in Watch Dogs. You can take part in digital trips. This is a kind of drug that sees Aiden collapse on the ground and experience weird trips that let you play as things like a mechanical spider. Or bounce on a flower obstacle course. You can also can also play augmented reality games like a coin run. This game displays digital coins over the real world for you to run and collect on a timed course. There are also gang hideouts to clear, crimes to stop, car races, ctOS towers to hack and games (like poker) to play.

There is also the highly touted online portion to Watch Dogs. You can invade others games and online players can invade your game. What happens is you get a notification that someone is hacking you and then you have to use your phone to find the person hacking you and eliminate them before they get away with the information. This has nothing to do with the single player game and there is a different xp system in place for this. The problem this is these multiplayer hacking things invade your single player game. You might think this as a problem but in my whole time playing this 30-40 hour game, I only got hacked 5 times. 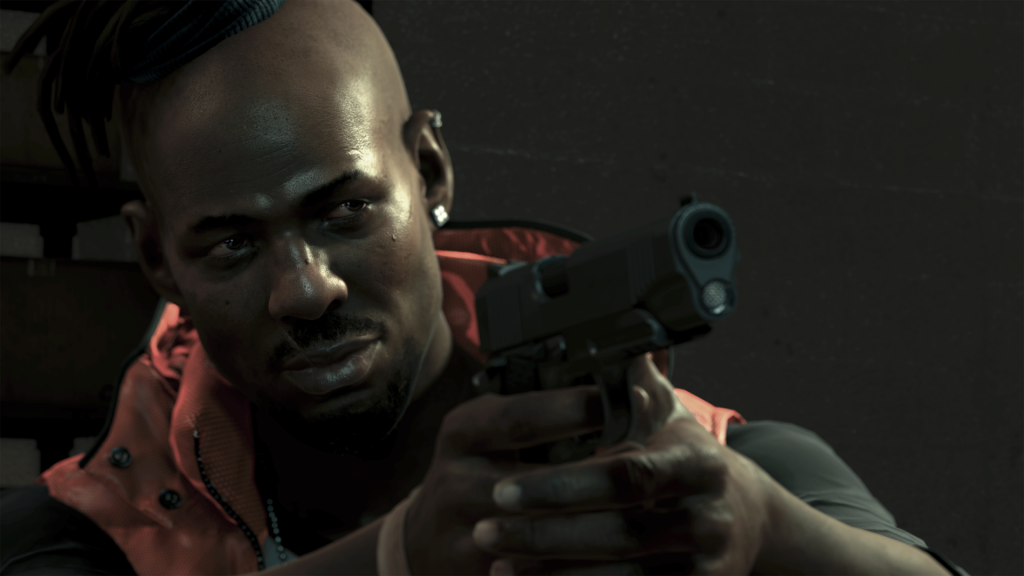 Watch Dogs is a fully fleshed out world. It is a smaller version of the city of Chicago. I have never been to Chicago but the world looks really cool. Now I know the graphics is the biggest point of contention for this game. I know this game does not look as good as it did a E3 a year ago. I guarantee that it was running on a high end PC at that conference. That being said, Watch Dogs looks really good. I wouldn’t say that it is the best looking game on PS4 but it still looks great. NPCs are talking all around you at all times. The only thing is that the language is almost always offensive. When you hack people in the world, you will see things about that person. They are never central to the story but help flesh out the world.

I got lost in the world of Watch Dogs. I would be on the way to the next story mission when I would get told that someone is hacking me. I would then dispatch the hacker. Only to be alerted of a crime that will be happening. After stopping the crime, I would decide to hack people to steal their money. Someone would catch me and call the police and I would have an epic police chase. Once the I evade the police, I would then head off to the main mission. This is the first game of the new generation that I got lost in. I will continue playing this game until the next big title comes out.

– reviewed on PS4 copy of game

I got lost in the world of Watch Dogs. I would be on the way to the next story mission when I would get told that someone is hacking me. I would then dispatch the hacker. Only to be alerted of a crime that will be happening. After stopping the crime, I would decide to hack people to steal their money. Someone would catch me and call the police and I would have an epic police chase. Once the I evade the police, I would then head off to the main mission. This is the first game of the new generation that I got lost in. I will continue playing this game until the next big title comes out.