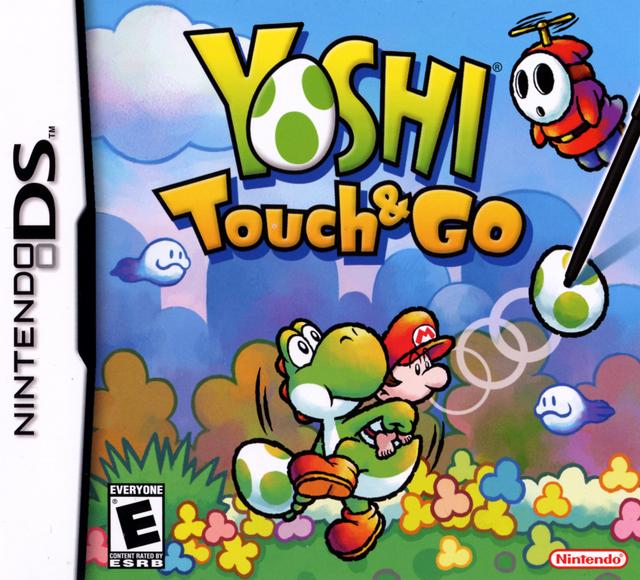 Ever since the little green guy’s appearance several years ago, Yoshi has captured the hearts of the world and appeared on all sorts of clothing and gaming gear. With his immense popularity it only makes sense that he should star in his very own DS adventure–an adventure named Yoshi Touch and Go.

How does this adventure add up on the fun scale? Read on to find out!

High in the heavens, a stork carries two precious burdens–twin brothers–that it is delivering to a very happy couple. The two brothers–Mario and Luigi–are content to be flying through the air together on a peaceful early morning… until the unexpected happens.

A sinister, dark shape smashes into the stork with a cackle and Mario and Luigi fall to the ground!

Fortunately, Mario falls over a forest inhabited by Yoshis. A kind Yoshi, seeing the plight of the infant, rushes to the rescue of baby Mario (and later baby Luigi) in an attempt to reunite him with the horrified stork.

Positive Elements
Yoshi has nothing to gain or lose by helping baby Mario and baby Luigi. He selflessly makes it his mission to reunite the two brothers with the stork.

Spiritual Content
Nothing worthy of concern. One mode has an enemy that looks like a flying, skeleton bird. 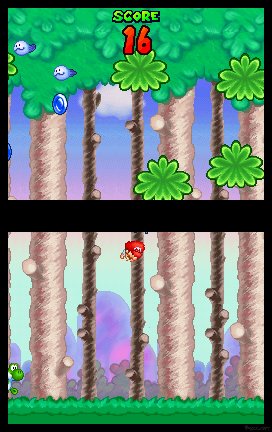 Violence
Cutscene Violence. There really aren’t any cutscenes in Yoshi Touch and Go. Kamek crashes into the stork, causing it to drop Mario and Luigi, each time you start a game mode.

Gameplay Violence. Yoshi can attack enemies by jumping on their heads or throwing his famous eggs at them. Defeated enemies make a “blip” noise, turn upside down, and fall off of the screen. When Yoshi is hit, he gives a despairing “Waow!” and spins dizzily before collapsing.

Yoshi Touch and Go is not your typical Mario game. Rather than following a simple plot, it focuses entirely on arcade-styled gameplay. Aside from a few fragments of a plot at the game’s beginning, Yoshi Touch and Go has basically no storyline, which may disappoint some. Instead, gameplay dominates all, and players will be very focused on “getting the high score” rather than “getting to the next part of the story.” 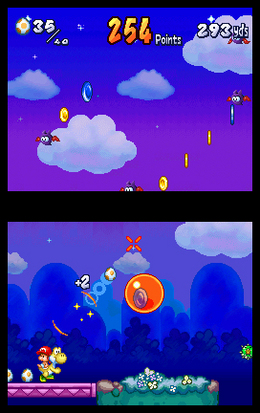 Two of the modes in Yoshi Touch and Go have no ending, meaning that the whole point of them is to see how far you can get and how high of a score you can achieve. The first of these modes–Marathon Mode–is arguably the most fun of all the game modes. Yoshi will be challenged to get as far along the never-ending course as possible while exchanging baby Mario with a new Yoshi every 1,000 yards. The Challenge Mode is the most brutal of the game modes. Yoshi will be pitted in difficult levels in a “survive-as-long-as-possible” situation where he must defeat enemies to gain more time for himself.

A VS mode enables players to get into the action by challenging each other in a “race-for-the-goal” game.

No matter what mode the player chooses, the gameplay follows the same basic pattern. The beginning of each mode involves the player guiding baby Mario to the safety of the forest floor as he drifts slowly to earth by three balloons. And you don’t want those balloons to pop! Using the stylus, players can draw clouds to guide both Mario and Yoshi on their journey. Clouds can be used to form paths when crossing dangerous gorges. By drawing a circle around enemies or fruit, players can trap them in bubbles and drag them to Yoshi for more points or additional throwing eggs. If you make a mistake and don’t like where you’ve drawn clouds, you can blow into the DS and whisk them away. Once the player is in control of Yoshi, the little green guy will begin his never-ending walk to the goal. Yoshi moves automatically, so the player must be quick to draw cloud pathways and defeat all enemies in immediate reach. Yoshi can only be hit one time, so take good care of him.

As with all arcade-like games, combos and bonuses are made possible by hitting multiple enemies at once with an egg or trapping so many coins in cloud-bubbles. The various methods of achieving high scores are practically endless, so a good sense of creativity is pretty helpful. 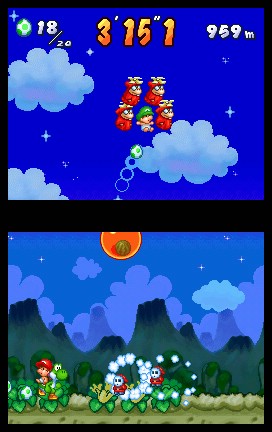 Yoshi Touch and Go takes a highly-appropriate graphic scheme. Its bright, cheery, cartoony world practically screams “Yoshi!” All backgrounds and characters are well-crafted sprites that move accurately and effortlessly. As far as its artistic side is concerned, Yoshi Touch and Go is well-developed.

Yoshi Touch and Go takes on a MIDI-like soundtrack. It is not at all inappropriate, but certainly doesn’t sound realistic. For the cartoony, light-hearted feel of the game, however, it is very suiting. All of the themes, with the exception of the Challenge Mode (which will likely throw you into a panic with its heart-pounding “time-is-running-out” thematic), are very relaxing and fun to listen to. The main menu theme is arguably the best of the bunch.

Sounds are also suitable for the game and tie in nicely with the music. Yoshi’s classic noises are all present, as are a few English words like “Goal!” Noises typical of the Mario world are scattered all through Yoshi Touch and Go. 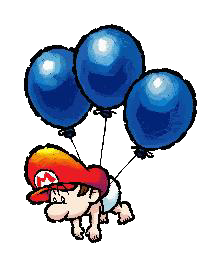 If it doesn’t have a good story, I don’t like it, so goes my gaming motto. With Yoshi Touch and Go, however, I’ll make an exception.

I’m not usually into the arcade-based games, but this one was a ton of fun. It was challenging, but not to the point of frustration, and almost bordered on addicting. Once you’ve entered Yoshi’s little world of “get-the-high-score,” you’ll find it very difficult to put the game down without doing just that–getting the high score.

The final say? Yoshi Touch and Go is tons of fun, especially if you’re into the whole arcade-based gameplay thing. If you like Yoshi and you’re looking for a clean, arcade-styled game, you’re definitely going to want to pick this one up for some light-hearted fun.

Once you’ve entered Yoshi’s little world of “get-the-high-score,” you’ll find it very difficult to put the game down without doing just that--getting the high score. If you like Yoshi and you’re looking for a clean, arcade-styled game, you’re definitely going to want to pick this one up for some light-hearted fun.