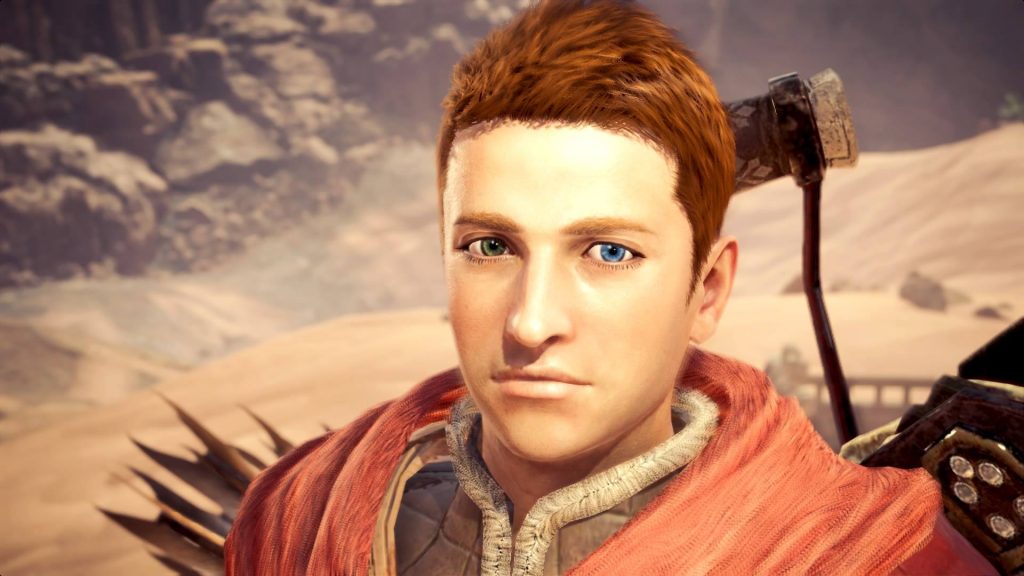 A few things about my experience with Monster Hunter: World‘s character creator struck me. The first was that most of the hairstyles are awful. I ended up going with the hairstyle that I began with (seen above) as it was the only one that really looked right to me. The second thing I noticed was the staggering amount of color options. This is what ate up most of my time. Purple hair? Nah. Yellow eyes? Nah. Slightly different purple hair? Still no. As you can see, I eventually settled on a natural color, but that didn’t stop me from using the color gradient options to their full capacity. I was really pleasantly surprised by the ability to create a character with heterochromia. Monster Hunter: World is definitely the only game I can think of that allows for this option. Basically, its character creator excels despite the lack of decent hair styles because it provides so many different options in terms of color. 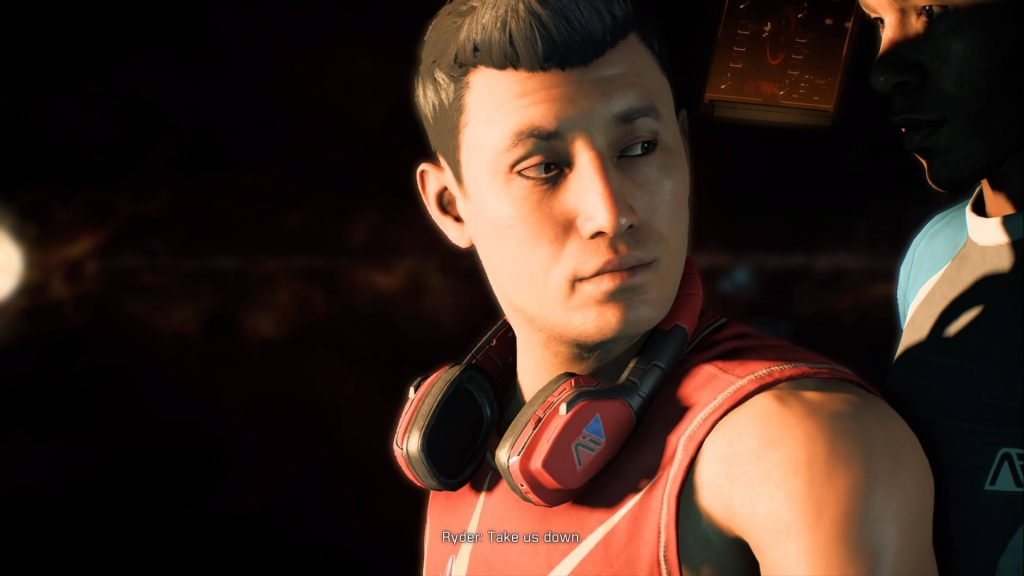 If it wasn’t already obvious, I adore Mass Effect. I still maintain that Andromeda is a good game despite its issues. I, however, will not deny that its character creator is definitely one its drawbacks. I’m not quite sure how it all went so wrong with the character creator, but it was so bad that I actually went with the default appearance for Ryder on my first playthrough.

One of the biggest problems with the Andromeda character creator is that your character’s nose and eye shape cannot be changed depending upon the preset that you select. You wouldn’t think that it would make that much of a difference not being able to edit these features, but trust me, it does. Eyebrows also suffer from this issue with the added problem of not being able to change their color. Not being able to change eyebrow color essentially makes one of the few good things about the creator useless. Andromeda includs a staggering number of different hair colors for players to choose from, but they all look odd because your character would always have black eyebrows. Also, like Monster Hunter, the hairstyle options are lacking. The game’s animation issues do little to help the situation and even the best looking characters can look way older than they were in certain cutscenes. To the game’s credit, however, there is a lot of freedom regarding eye color and neck tattoos were offered—a significant improvement upon the face tattoos that games usually make available. 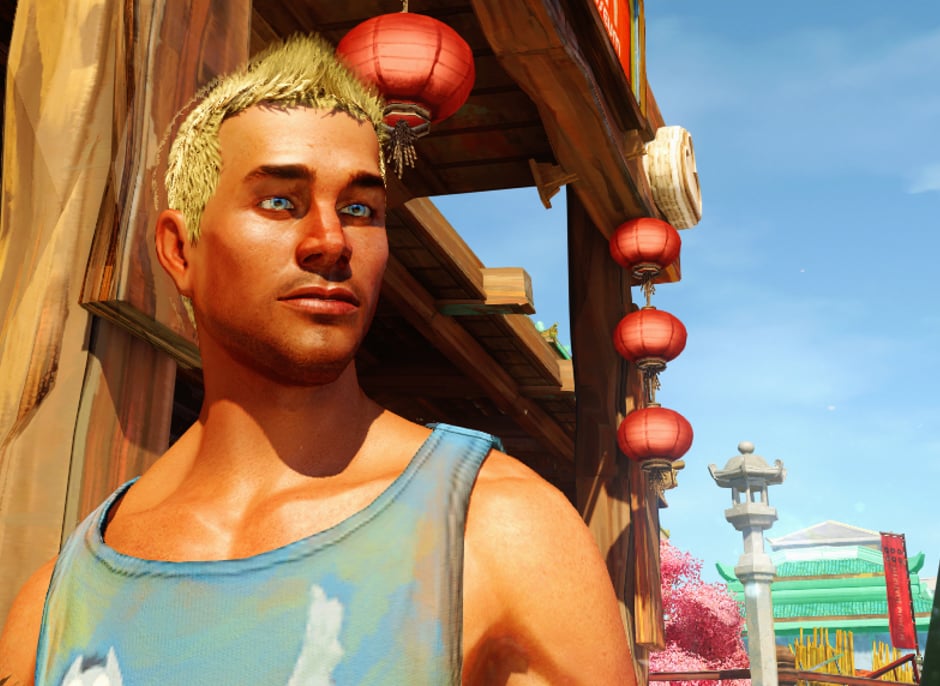 While Sunset Overdrive let players change the appearance of their characters with a myriad of different clothing options, its character creator is interesting for a few reasons. The game allows the player to choose between two different body types (slim and bulky) which is not unheard of, but is still fairly rare. Additionally, despite all its color wheels and options, Monster Hunter: World  lacks one option that Sunset Overdrive sports: two-toned hair. Each hairstyle can be made two different colors and while the game lacks the color options of recent character creators, there are still many colors to choose from and the ability to select two helps make each character unique. Though again, hairstyles are lacking. The game also allows for characters to have a traditional eye color or use some zany contacts to create different effects like pure black eyes or cat eyes. I don’t recall any other game I’ve played offering this kind of option. Besides the lack of hairstyles, the game’s creator suffers in other other significant way. Face shape and skin tone can not be selected independently. So if you want your character to have a certain facial structure, then you had better hope you also like the skin tone that accompanied it. Otherwise you were out of luck. The presets are an unfortunate miss for a game with two of the most unique options I’ve seen in a character creator. 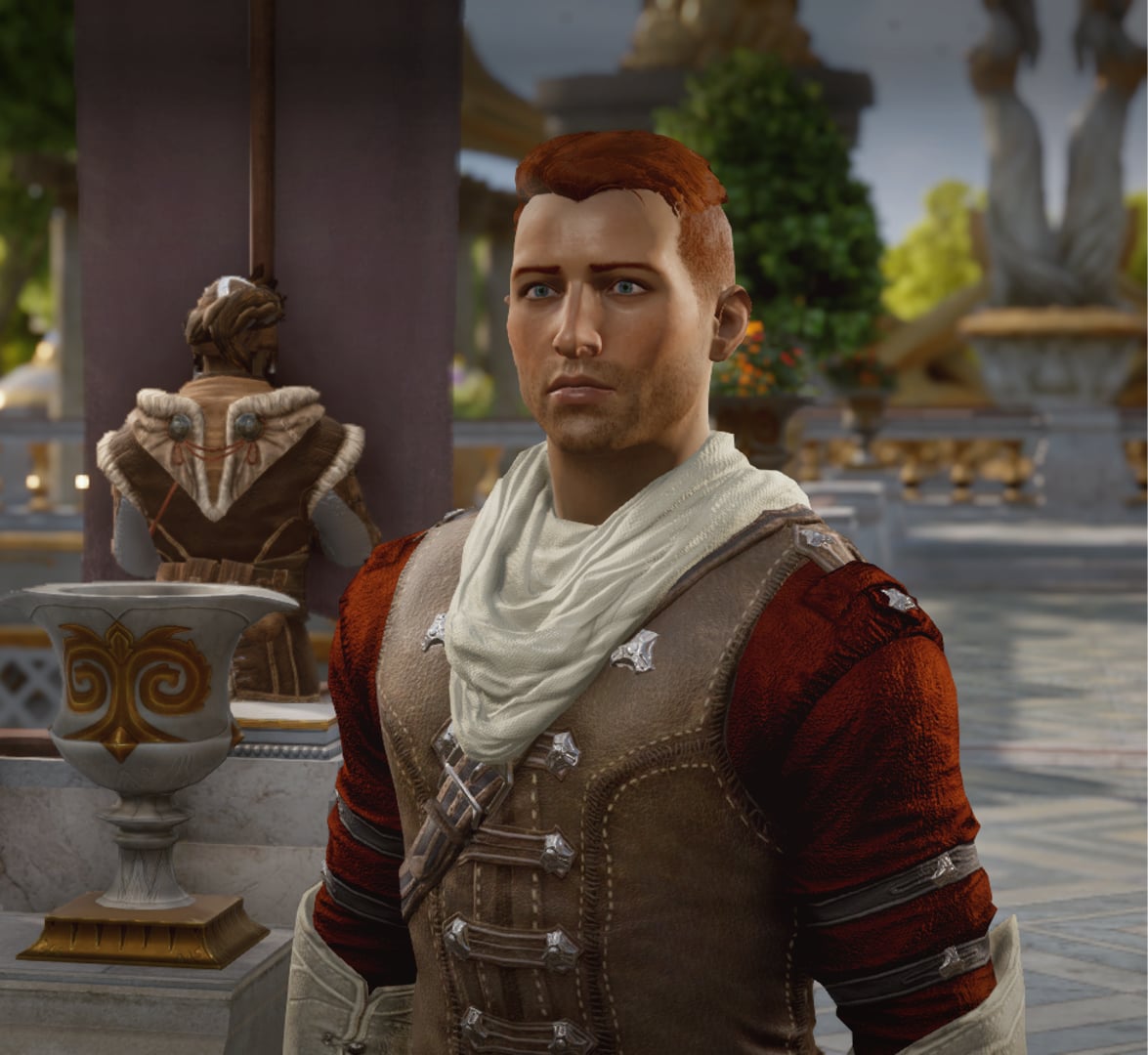 Despite Dragon Age: Inquistion sharing the fate of every other game on this list, that being terrible hairstyles (seriously, why is this so hard?), my first Inquisitor is probably my favorite character that I’ve created in any game. Many of the presets in the game just look great. Sure, there are some that are pretty meh, but the game allows for such a degree of customization, that the player can make any preset look pleasing with enough time. The main thing the game’s creator has going for it is just how much you can fine tune your character’s appearance. Vertical and horizontal sliders for nose depth, brow height, lip glossiness, etc.—it’s a little absurd at times honestly, but because there are some really nice presets, one doesn’t have to mess with all these options if they prefer not to. This game does feature the color wheel for makeup, tattoos, and eye color which is much appreciated. Every character customized with the wheel will have a different eye color than any other character (minute though the difference may be). Options like having a broken nose and adjusting the size of the Adam’s apple remain as unique features as well. Inquistion doesn’t really do one single thing impressively well, rather, it just puts a lot of effort into every detail of a character’s appearance…besides their hairstyle. Keep in mind that there are alos four different species to choose from and customizing a human is going to be very different from customizing a Qunari.

There are of course many more games that have character creators attached to them. I just wanted to touch on a few that have stood out to me recently—or better and worse. Feel free to share what your favorite characters and creators on our social media pages.