Geeks Under Grace has big plans for 2019, and more presence at conventions is one of them. PAX South 2019 was a very important trip not only because it was the first of the year, but also because we aimed to set the standard for how we do them in the future. It wasn’t just about making connections with developers, publishers, and PR companies as we have done in the past. This time, we were there to spread the word about our organization and reach people who may not that there is a God out there who loves them. Our podcast crew including Cody’s wife Teah represented Geeks Under Grace during this event armed with custom pins and handouts to spread the Word while wearing “Prayer Team” shirts. This edition of the Con Report will tell you about our experiences and what our days were like on the weekend of January 18th 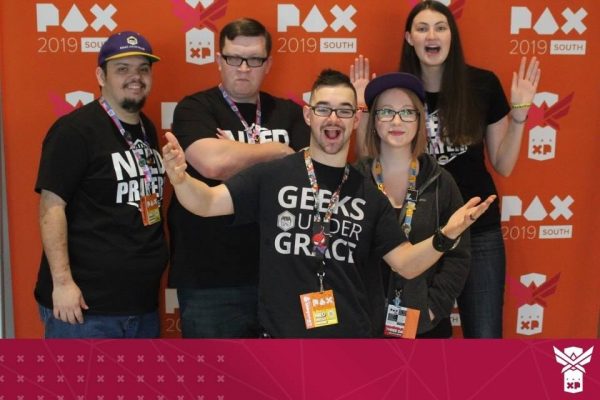 Attending the event as media meant that we had could take advantage of access to the expo hall an hour early. After making it through the security lines, Cody and Teah went to attend a panel featuring Cory Barlog (God of War series); Shelley went to find out where to sign up for the Smash Bros. Ultimate tournament; Joe and I hit the show floor to do some PR work. During that first hour, Joe and I went hands-on with Jump Force and played the Claire demo for Resident Evil 2 and were given R.P.D. shirts.

Joe and I then met up with Shelley and went to see how Tunic was doing this year, a game we’ve been following since it was known as Secret Legend at PAX West 2016. At that booth was where we met the founding members of Love Thy Nerd for the first time, an organization with a mission much like our own. We exchanged pins and lanyards as we introduced ourselves along with a quick conversation. Cody and Teah spent that time getting b-roll footage that we can use for future content. On our way to meet up with them before lunch, we stopped by a booth called Artisan Dice, a company that makes handcrafted dice for tabletop gaming that you should check out. 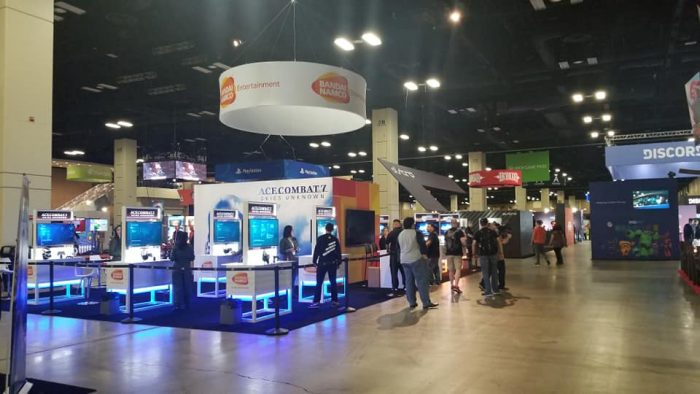 For lunch, there was a ramen place that sounded great but had a long wait, so we went and had some barbecue. After that, we had a few prescheduled appointments. The first featured a demo for the new and upcoming ToeJam & Earl game called Back in the Groove by Humanature Studios; I then interviewed the lead art designer. The second and last appointment for the day was with developers Void Point and their game Ion Maiden. This game is a spiritual successor to the likes of Duke Nukem, and its even published by 3D Realms. We played the demo and chatted with the lead developer. I was so terrible at the game that I got myself stuck, so he had to turn on “God Mode” for me. Despite my being terrible at the game it was a great time.

We hit the ground running that day and didn’t pass out as many pins and handouts as we would’ve liked to, but making connections and building content was a great way to start the weekend.

With day one in the books, we had some ideas on things we wanted to do. Again, we got there early to claim a locker for all of our gear and spent some time walking the convention center before the exhibit hall was opened. Cody increased focus on outreach and handed a pin to anyone and everyone who would take one. When the show floor did finally open, we started off with Cody playing the demo for Days Gone as Teah got his thoughts about the game on film. Joe, Shelley, and I sat down to check out Swapette Showdown that is heavily inspired by Tetris Attack and Pokemon Puzzle League. After that, we all headed back to the Jump Force booth for Shelley and me to play a match and get our thoughts on camera as well. Spending the morning making content made us hungry, so we found a Mexican food place not far away to refuel for the rest of the day. 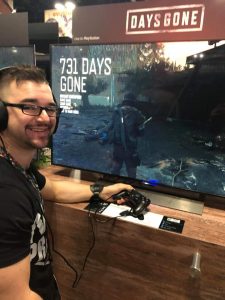 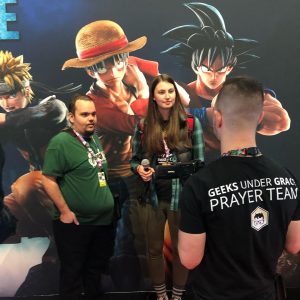 After lunch, I did have another appointment scheduled for that afternoon, but Joe and I explored the tabletop side of the expo hall. Much of what we saw looked very interesting, yet what stuck out to me the most was Showdown! The Samurai Card Game and a Street Fighter card game that is Season 3 of what is known as Exceed Fighting System. Tabletop gaming had a massive presence at PAX South and this was a great experience for me since I am strongly rooted in the digital side of gaming.

It became time for my appointment with 1047 games to check out Splitgate: Arena Warfare, which I already wrote a preview for. Shelley competed in the Smash Bros. Ultimate tournament, which she says turned out to be a strange format but a good experience to have. Then at the end of the day, we had a meetup with a few people from the community. It was great to connect with others that are fans of our work and support our mission. We hope to do that more and see you all at the conventions we attend in the future. 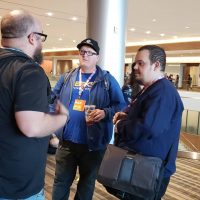 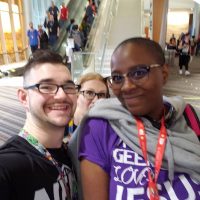 Lastly, for Saturday, we stayed at the convention center to meet up and hang out with the folks from Love Thy Nerd. We had such a good time in fellowship mode while playing tabletop games that we were there until 10 o’clock at night. Shelley, Joe, and I joined a few people in a game called The Reckoners that is based on a book series from Brandon Sanderson. Cody and Teah joined others in a game called WIngspan that was bird themed and seemed to be a lot of fun. It was good to finally meet the head staff of LTN and many of the mission volunteers that were there. Connecting with others that are on the same mission is an important aspect of ministry.

With Sunday being the final day, we planned for a shorter and more relaxing day. The first thing we had planned for the day was to visit True Dungeon, an interactive experience inspired by the likes of tabletop RPGs. On this day the demo station was already taken down, but they were kind enough to give us a tour. With different themes and storylines each year, it often gets compared to an escape room even though it started way back in 2003. Giving too much detail on what we saw would spoil things for the rest of the season, so we could not take any pictures. We were told it takes about three semi-trucks to transport everything to smaller cons such as PAX South, and for the bigger events it takes up to seven. You can learn more about this neat experience on their website—we are planning to experience True Dungeon for ourselves if we return in 2020.

Next on the list was our second interview of the weekend. I had the opportunity to do an interview with Mega Ran, who is a nerdcore Hip Hope artist who recently shared his faith on an album for the first time a few years ago. Not only did we discuss the world of gaming, but we talked about the values of having faith while living in a world such as ours. That was an interview I’ve wanted to get for some time now and I am happy to share it right here.

We spent the rest of the day by simply walking the show floor and in the concession area during lunch and continued to hand out pins. We had an appointment lined up the video game publisher NIS America later that day but got ahead of it to check out a few of their games. We even put a face to the contact we’ve had with them for the past few years. Doing that ultimately freed up more time that afternoon, which turned out to be very well-spent.

Later in the day, we tried a VR battle royale game with Oculus called Population: One from BigBox VR. This was the first time I ever played a VR game—I never knew if I could due to my vision disability. It was an immersive first-person shooter in which we aimed down the sights of our guns, with the ability to climb and glide like a superhero, along with some building mechanics similar to Fortnite. With so many abilities it seems like it would be overwhelming, but we all adapted to it fairly quickly. 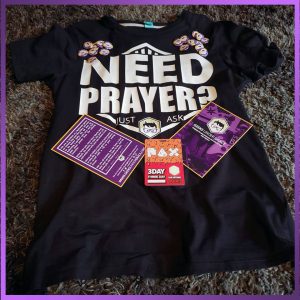 As the day moved into late afternoon, we took the last hour to make one last push to hand out every pin in our possession. As Cody and I walked through the building and show floor, we were able to have a conversation with a woman who was actually an employee of the convention center itself. Though she was already a believer in Christ, we were able to pray with her for a request she had. That conversation was a reminder that it didn’t matter whether it was an attendee, dev/publisher, PAX Enforcer, or an employee; God was able to use us to bless that person’s day.

Once we got rid of the last few pins it was time to gather up the rest of the crew and our gear. Our time at PAX South 2019 had ended.

WIth only a five-person team, we were successful in making connections. We built relationships with developers, publishers, and fellow ministries. Some of them may have already known who we were and our mission, but there were thousands of people that hadn’t yet. While we had a small team, we hope it was that small pin that could point someone in the right direction. We also carried special handouts if anyone chose to further the conversation and wore our prayer team shirts to offer prayer to anyone that would ask.

If you’re reading this right now and maybe discovered us through PAX South 2019; this is what Geeks Under Grace is all about. You have a creator that loves you and cares for you for that any of us on this earth can fathom. Your fandom of video games, comics, anime, or D&D is not a condemnation—and that goes for Christians too. Our hobbies and interests can still be used for God’s glory.

That is the message we went to share at PAX South. Whether we there to reach those thousands of people or for the few people that asked us for prayer, our mission was complete in San Antonio, Texas. At this time we can’t say for sure if we will be there next year, but we hope to be so we can see you all again! 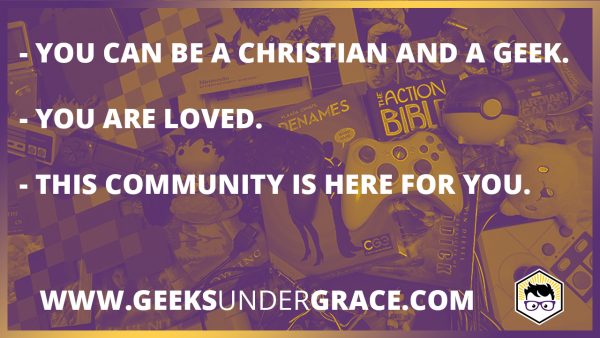