Are Consoles Holding Back PC Gaming?

Are consoles holding back PCs? This feels like the sort of asinine query a mouth-foaming, keyboard-clutching PC fanboy would sneer as he set down his $90 mouse. If anything, console peripheral developers have worked to innovate hardware and the race has become much closer.

I’ve made it well known that fanboy drivel of any sort gets under my skin. There are merits to every console available right now, just as there are with the PC. It’s undeniable that PCs have the edge on hardware. They always have and always will. I can’t help but laugh at questions like this when I look at the gaming landscape though. Nintendo’s Wii U, while underpowered when compared to its contemporaries, is one of the most innovative platforms available today. How often do you see games like Zombi U, Pikmin 3, and Kirby and the Rainbow Curse that employ a second screen so effectively? How many other platforms employ near-field technology?

What’s the last thing the PC truly innovated on? They used to be known for crazy peripherals: high-end flight sticks, head tracking systems, racing setups, etc. Now, PC enthusiasts have cooled their jets on what set them apart (while keeping their air of elitism) and have begun chasing the same sort of technologies Sony and Microsoft are chasing after in the form of immersive wearable technology.

PCs are still technologically superior. You can’t trade parts out in consoles to keep them relevant with the times. I do, however, feel like the gap has narrowed. Consoles have fought hard to bring themselves closer to parity and yes, it feels somewhat like the PC’s innovation has slowed a bit. I don’t feel like that should be credited to consoles, though. That’s what happens when the hare rested on its laurels—the console tortoise kept on trucking while the PC hare napped and the race suddenly became much closer. 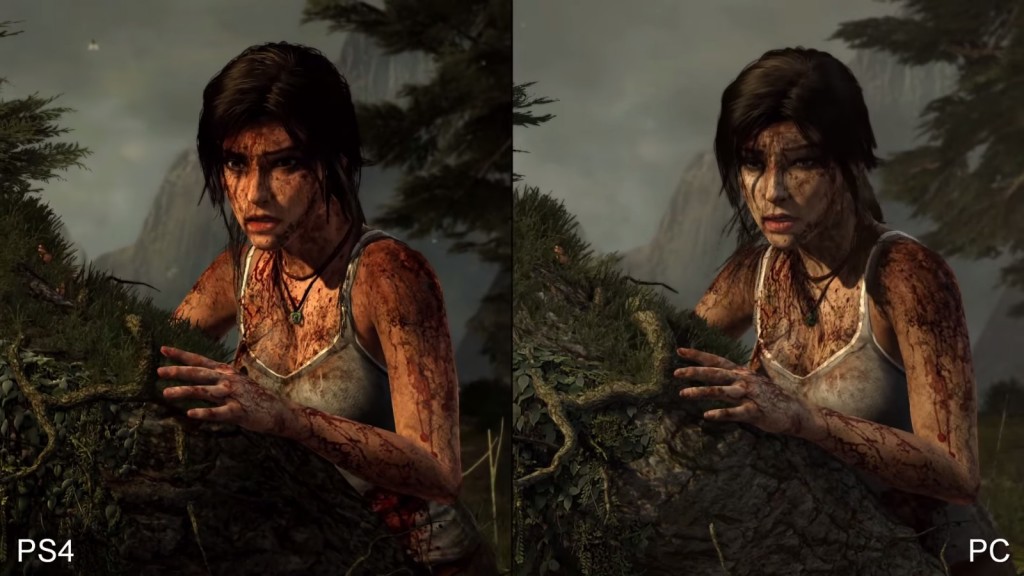 The call for submissions for this GUG community article could not be timelier, for in the just the past few weeks we have witnessed the release of two games that have suffered from what we know as “cross-gen” releases: GTAV (PC) and Mortal Kombat X.

Different from multiplatform releases, “cross-gen” games have existed since the days when companies would release 8-bit games to compliment the flagship 16-bit releases, and 16-bit versions alongside 32-bit showcases. The death of the Dreamcast and overwhelming popularity of the PS2 granted the industry the ability to abandon 32-bit cross-gen releases with the noteworthy exception of EA Sports games, and fully embrace 128-bit. Once more during last gen, we did not see many significant cross-gen ports because development in High Definition complicated things enough without the stress of producing comparative game in standard definition—an apparently insurmountable developer hurdle resulting in the alienation of the Wii. 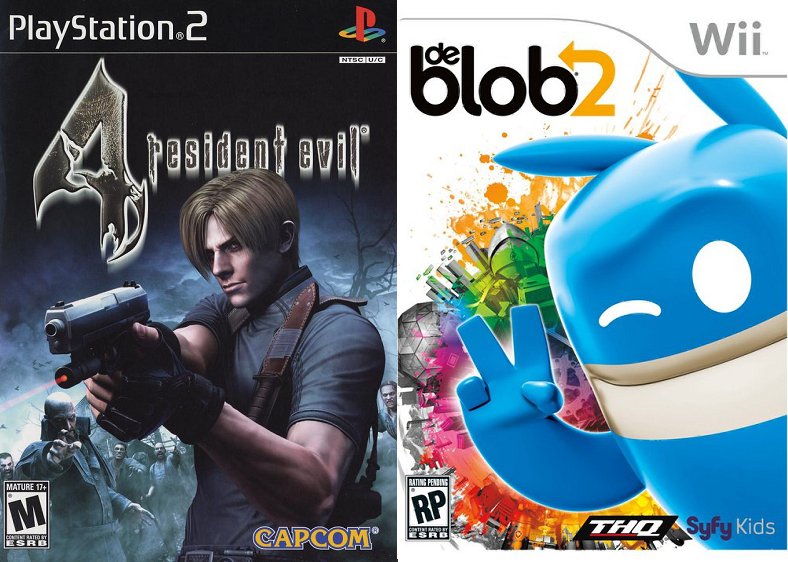 Two notable “cross-gen” releases in the past decade: RE4 was originally released on the GCN and infamously downported to PS2. It now has a remake. de Blob 2 is one of the only multiplatform releases on PS3/60 and Wii. Another example includes Dead Rising and Dead Rising: Chop Till You Drop, but the latter is bad.

In fact, HD created for companies an entirely new market to exploit: upscaling. Devil May Cry Collection, God of War: Saga Collection, and Ico and Shadow of the Colossus Collection are just a few games that have received the ol’ HD-treatment. They were smashing successes which allowed people who did not own certain systems (or much money) during the previous gen to get another shot at playing some good games such as MGS: Peace Walker, which was originally a PSP exclusive.

Unfortunately, the upscale generation paved the way for their ugly cousins: the remaster.

Now this is where PCs and the stagnation of the industry comes in.

The unprecedented longevity of last gen, ranging from 2006-2013 has compounded the industry’s stagnation. In just two short years of the PS4 and Xbone’s existence, we have seen (re)releases of Tomb Raider (2013), The Last of Us, and Devil May Cry 4 just to name a few. Unlike the same-gen multiplatform releases that once dominated the industry in the 90’s or the remakes of the past decade, these remasters are games that were released only in the last few years which have been “upgraded” to take advantage of the increased power offered through the PS3 and 360’s successors, and more importantly, early adopters who need games to justify their $400+ purchases. Meanwhile, publishers are charging full price for these re-releases when they launch, and some gamers are endowed foolish enough to double or triple-dip on GTAV for the 360, Xbone, and PC.

If gamers vote with their wallets that generously, the remasters will keep coming.

Meanwhile, multiple releases of essentially the same game with barely-noticeable changes is not, and was never necessary on the PC.

Remember Crysis? Yeah, that game just won’t go away, will it? It’s endurance can be attributed to the fact that it was developed with the sky as the limit; Crysis was an experiment demonstrating what PCs could be capable of if game companies did not restrain system requirements to the limitations of a console, but developed their projects while catering to the potential of the PC. Because that game was so far ahead of its time, it still looks spectacular for a game released at the beginning of last gen’s cycle, in 2007. It’s 2015, eight years later, and Crysis is still a legitimate benchmark for entry-level gaming rigs!

Crysis is a game to celebrate and a game to mourn. Developing with the PC enthusiast came at a price that we here at GUG have discussed elsewhere, thus resulting in the graphical moonwalk that is Crysis 2—the franchise’s shift from open-world to corridor shooter is again, a different topic I have addressed before, but with mechanics changes comes changes in art direction which justifies graphical intensity. Crysis 3 tries to return to its graphical roots, but the industry is unfortunately super-saturated with shooters, and it did not sell well.

With the unsustainable cost of developing “AAA” games in the HD era, publishers and developers have looked at multiplatform releases as more compulsory than charitable, but hardware architecture isn’t as easily deciphered like in the 90’s when the differences between Mortal Kombat 2 on the SNES and Genesis were more a matter of taste than unquestionable superiority. The discrepancies in hardware result in games like the original release of Bayonetta on the PS3 failing to maintain steady frames, or more recently the cross-gen release of THIEF (2014) suffering from textural inconsistencies across all platforms, from last gen to current to PC, and the notorious downgrade of Watch Dogs that can also be attributed to the cross-gen effect. Far Cry 3, Battlefield 3, Dark Souls 2…the list goes on and on concerning games that have made concessions when appearing both consoles and PC.

Nobody wins with cross-gen. Games like the aforementioned Watch Dogs struggles to maintain 30fps on the PS3/60 because the target platforms were originally intended for the PS4 and Xbone at minimum, but Ubisoft execs made the call: mo demographics, mo money. Meanwhile, those who have dropped $400+ on the newer consoles suffer because companies are either releasing games that are confined to the specs of the previous gen—like GTAV and MKX—or they are publishing remasters.

Props to Rockstar for taking their time with GTAV so it would not end up a mess like GTAIV. Still, we are only left to wonder what developers would be capable of if they did like Bohemia Interactive (ARMA) and catered to high-end PC gaming. The results would blow our minds—and probably our PCs.

Though we also witnessed some strange phenomena like the port of Resident Evil 4 from the GCN to the PS2; yes, that was same-gen, but that was a shocking move by Capcom, and a testament to the profitability of the PS2. Once more , we did not see many significant cross-gen ports due to the dawn of High Definition (Twilight Princess could be considered an exception, but most would agree that the conversion from GCN to Wii could hardly be considered cross-gen). 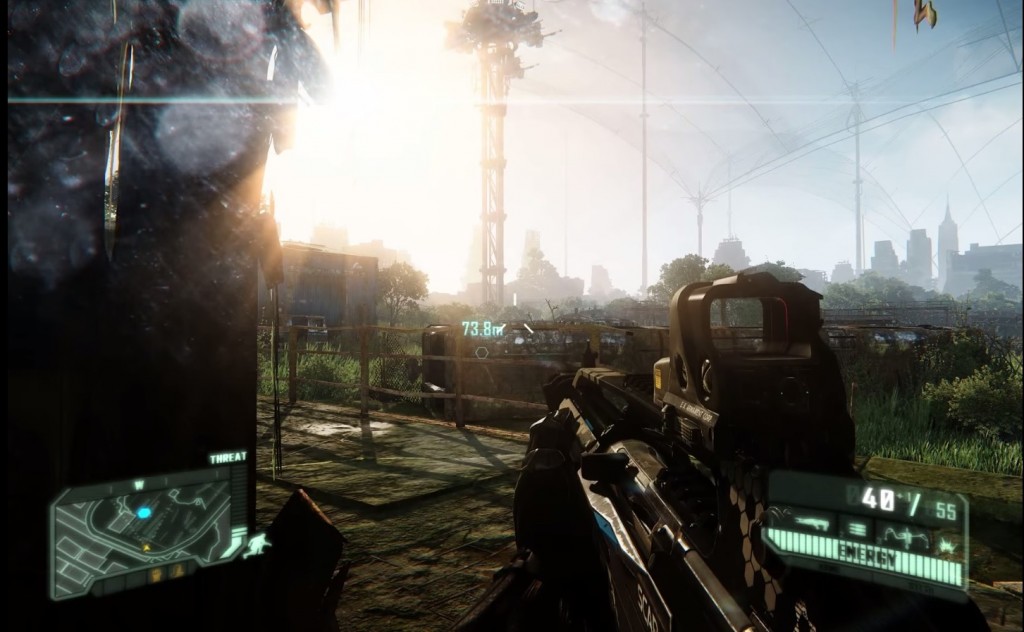 From the technical aspect, PC’s are being restrained by consoles. It really isn’t a question. Since most games are being developed for consoles, the PC ports are simply the console game with the graphics setting cranked all the way up. Usually this means better textures and a smoother framerate, but not much else. I know Maurice talked about it above, but Crysis was top of the line in 2007. That game would look awesome on the PS4 and Xbox One. Heck, bump up some textures and it would be the prettiest game by a mile on the consoles. I think Crysis 3 is even prettier on PC than Crysis 1 though. There is a reason that people used to ask “But, can it run Crysis?” all the time.

The real question I have is “Does it matter?” Does it really matter that technically the PC is being held back when most games are just rehashes of what we have seen before? Does it matter when indie games and Nintendo are the only ones really trying anything different with their games? Why does it matter how pretty my first person shooter looks when it is just another Call of Duty clone or worse—Call of Duty itself, which I believe is still on the same engine that ran Modern Warfare from 2007. I could be wrong, but it sure feels like it.

What has really changed in the MMO world, for example, a PC staple? That is a genre DOMINATED by PC’s and yet, it all feels and plays like WOW. I would know after playing months of Star Wars: The Old Republic. I really think it doesn’t matter. Developers and publishers need to focus on trying new things rather than rehashing what we have seen before, albeit with better graphics.

What do you think? Are consoles really holding back PC gaming or is it all an illusion?