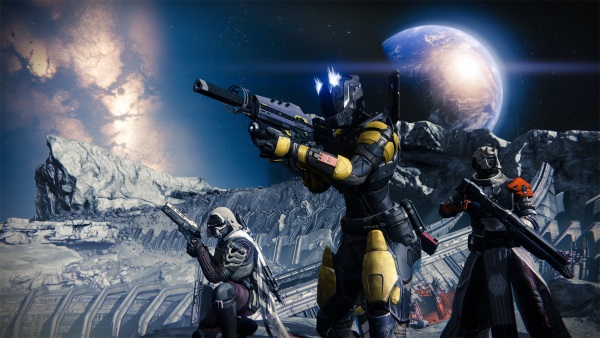 Launch day has now come and gone, and I’ve been up to my elbows in Fallen and Hive with a level 12 Titan and a level 9 Warlock. Let’s dig into my thoughts on Bungie‘s newest title out of the gates.

The production value is fantastic. Destiny is a beautiful looking game and it backs it up through smooth, responsive on-screen action that will keep you pressing on for hours before taking a break. Quite frankly, I believe nearly everyone already knew that though (especially judging by the pre-order numbers). Cut scenes are beautifully rendered and, on current generation hardware, never fail to impress. With voice work from the like of Peter Dinklage, Nathan Fillion, and more, the spoken dialogue never fails to impress either.

“Is the game safe for my child?” As always, the answer is, “It depends.” What I will say, though, is that so far, I’ve not seen any blood, guts, gore, sexually explicit material, or even heard any profanity. I would suggest that if you’re ok with them playing Halo, you’re probably safe with Destiny.

The story is fairly convoluted. We know a big planetoid called The Traveler came years ago and vaulted our technology leagues beyond where we stand. Unfortunately, it brought hordes of evil along with it. Now, humanity is fighting for its last breath and guardians have to execute the will of The Traveler to keep The Darkness at bay.

[blockquote] “if you’re ok with them playing Halo, you’re probably safe with Destiny.”[/blockquote] 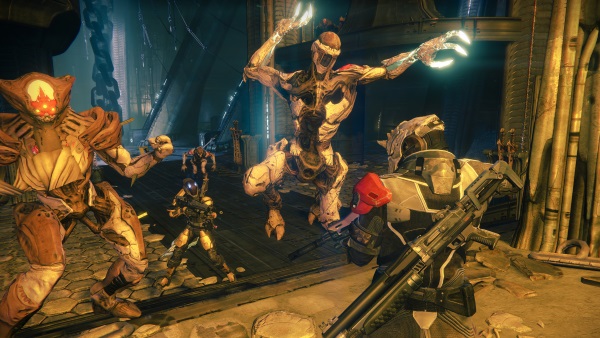 One of the things that hit me fairly soon into the game was that I was spending a lot of time just sitting. It didn’t matter if I was heading to a strike mission on Earth, a jaunt on the moon, a crucible match, or to the Tower to hang out, it’s all going to take a while. It’s not one platform over the other, either. I’m playing on both PlayStation 4 and Xbox One, and the load times are consistent on both platforms. I shouldn’t have time to make a sandwich and take my dogs for a run every time I change locations.

Second, I’ve played a fair bit of the Crucible already. I’ve probably put 5-6 hours into it. I really do enjoy Destiny’s PVP content. I think the maps are well designed and fairly balanced, and I’ll definitely be spending a lot of time in here. It also helps that you earn experience and gear as you play, making it a viable path to max your character out through it.

My one complaint with the Crucible, so far, is that they have small maps and big maps on the same playlist. Let me clarify: I don’t enjoy the vehicle combat in Destiny. It makes things feel unbalanced. Yes, both sides can get vehicles, but A) the numbers are limited and B) they can be ridiculous to take out as a guardian. Heavy weapon ammunition and turrets are both rare commodities and, without them, all you can really do is hide and hope someone else has a missile ready for the rocket jockey outside your door.

Beyond that, I feel like there’s a fair deal of content to explore and discover throughout the game. Yes, we’ve all probably finished the missions on Earth and thought, “Well, that’s done. No more Earth now.” Let’s get real, though. There are multiple sections I’ve stumbled across with high level enemies I couldn’t hurt or zones I couldn’t yet access. We’ll be back for Earth when we’re stronger. When you consider that there are at least four zones to explore (Earth, the moon, Mars, and Venus) with story missions, strike missions, raids, and more, I feel comfortable in saying there’s plenty here to keep you busy for quite a while.

Stay tuned to Geeks Under Grace for the full review, coming in the next few days!

Are you a fellow guardian? Looking for some folks to chat with while you conquer The Darkness? Join the Geeks Under Grace clan! Check us out here!