6 Reasons Why Fire Emblem: Path of Radiance is One of the Series’ Strongest Western Titles

Super Smash Bros. Melee‘s introduction of Marth and Roy skyrocketed the popularity of Fire Emblem. Previously, the series was virtually unknown outside of Japan. After Smash, however, that all changed. Given the newfound interest in the series, Nintendo released the 7th Fire Emblem title, Rekka no Ken (or Blazing Sword) in the West, simply under the title Fire Emblem. Since then, virtually every subsequent title in the series (besides 12) has been released in the West. Among these however, Fire Emblem: Path of Radiance remains one of the best titles for numerous reasons.

The Non-Royalty Status of its Protagonist 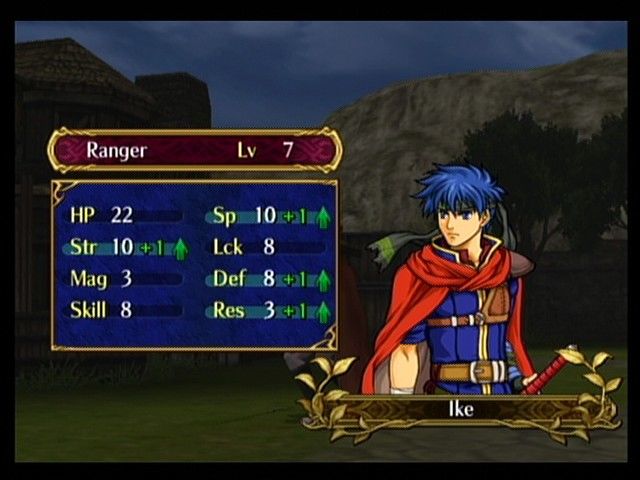 One of the most common elements in the Fire Emblem series is a royal protagonist. The games frequently star a prince or princess who is seeking to win a war or reclaim their throne in some fashion. Path of Radiance bucks this trend by having its protagonist, Ike, be a common mercenary. By doing this, the game not only breaks the mold of the games that came before, but also creates an underdog story. Ike is not someone that people will immediately follow. He has virtually no social status and people distrust his qualifications to take over for his father, Greil, the leader of the mercenary group. Watching Ike progressively gain respect from those who follow him as the game continues serves as a quantifiable example of character development and allows the player to feel as though they are accomplishing their goals.

The Timeline of the Game 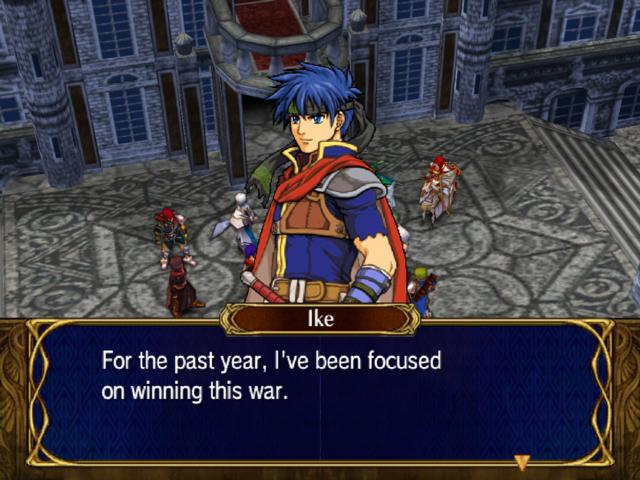 Many of the Fire Emblem games, such as Awakening, feature multiple plots, which often means that an entire war is spread over only a few chapters until another event or war commences (only to last just another few chapters). When this occurs it lessens the feeling that the player is actually fighting a far-reaching, long lasting war.  Path of Radiance has one war that it focuses on and it takes place over the span of a little over a year. Thus, by the end of the game, it really feels like Ike and his company have been through an extremely long journey. It adds a significant layer of immersion that many of the other games are lacking. 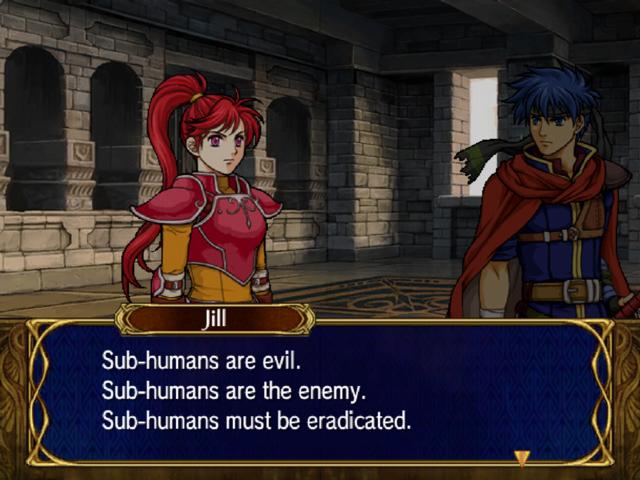 Path of Radiance is notable for including a class of characters known as the Laguz. These are a race of people who are able to shift into an animal form, be that a bird, cat, or dragon. With the addition of these characters comes themes of prejudice and racism. These themes could’ve come across as ham-fisted or disingenuous, but the excellent writing prevents this from being the case. This is also another moment where Ike being a common citizen helps the story. Ike has not been exposed to the groups of people who distrust Laguz, or the Laguz that distrust the Beorc (humans). The player is able to see through Ike’s, neutral eyes. The whole plot adds the kind of complexity to a deep issue that many of the other games lack. 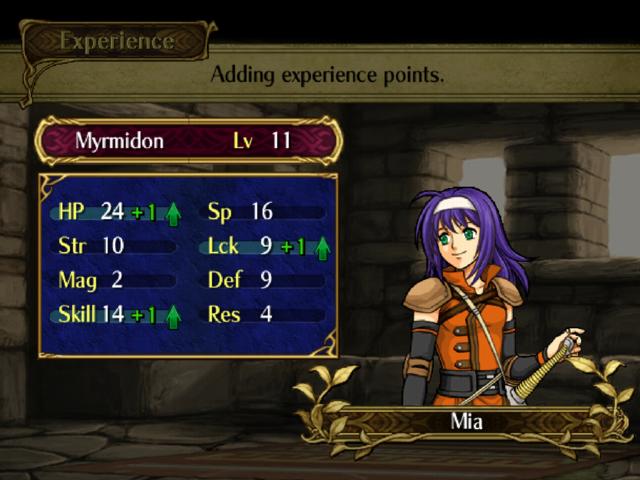 The story is not the only thing in Path of Radiance that makes it unique in a positive way. By completing various side objectives in some of the chapters, the player can earn bonus experience which can then be applied later to any character. This cuts down on a lot of the grind that the other games contain. This addition is contentious for sure, because it certainly does make the game easier. But on the other hand, it also negates the need to go to a specific place to fight the same enemies over and over again to train like in Sacred Stones. The bonus experience also really helps with the replayability of the game because the player may apply bonus experience to characters they would simply never use or who are not very strong when recruited. This allows pretty much every single character to be viable during the course of the game. 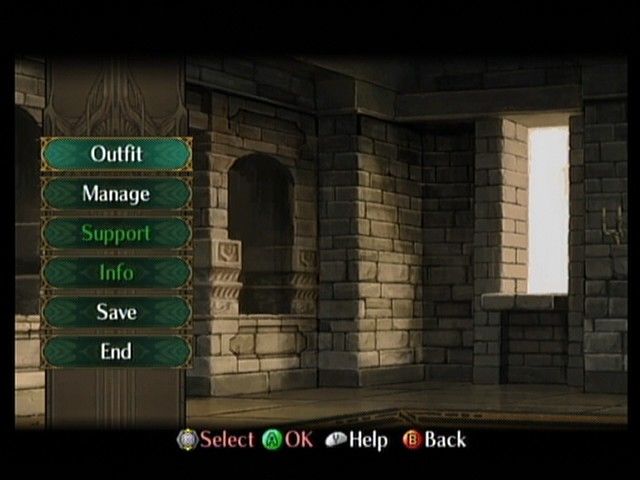 While having a base to go back to plan and prepare for the next chapter is par for the course for the series, Path of Radiance‘s base mechanic was very well done. While it is also the place where the aforementioned bonus experience could be applied, there were also a variety of features available to the player. The most unique option is the “Info” section. In this section, the player can view optional interactions between the characters which will often result in gaining items or new characters. These conversations are similar to the support conversations found in the other games, but instead of their appearance being based on the literal closeness of your units, it is based on who you recruit and what objectives you accomplish. The base also allows the player to view these support conversations. This allows the player to focus on the combat during the missions instead of trying to view the support conversations. The player can also create customized weapons at the base, giving them unique colors, stats, and names.

The Existence of a Sequel 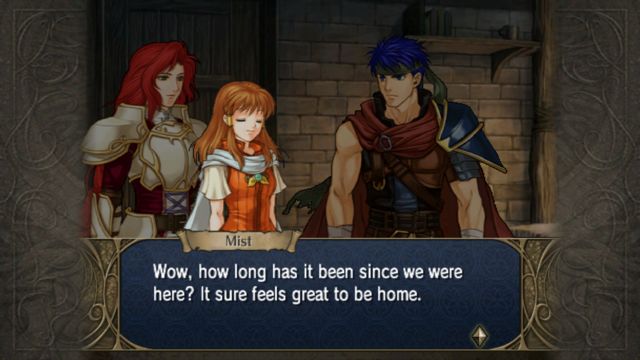 Many of the Fire Emblem games released in Japan have sequels or prequels to accompany them. In fact, Blazing Sword is a prequel to the 6th Fire Emblem game in which Roy appears. Marth is also the star of many of the Fire Emblem titles, but only one was ever released in the West. In comparison, Path of Radiance received a sequel in Radiant Dawn. While Radiant Dawn falls into the previously mentioned pitfall of having a few too many plots, the problem was lessened by the fact that most of the important characters had already been established prior in Path of Radiance, which can stand on its own, but Radiant Dawn exists for those who wish to see more of Ike and company.

Ultimately, while Path of Radiance is a very traditional Fire Emblem game in many aspects, it manages to have several key additions that really help it to rise above the games that came before, and the games that have come since. Its characters and timeline help it to present thought-provoking themes while taking the player on a very believable and immersive journey that concludes well enough that its sequel is a great bonus, not a necessity.