The Five Games of Christmas

Oh man, it’s Christmas! This season has been insane, with  so many long-anticipated games releasing at once. I’ve barely had time to play everything that’s come out in the last two months.

Between two games that have left fans waiting for well over a decade, and the steady stream of solid new releases, it’s hard to just sit down and get myself in the holiday spirit over a video game. Honestly, as amazing as all the new games are, few of them really have a Christmas element to them, beyond the occasional snow area. Between a new job and all the running around that I’ve been doing for the holidays, I come home dragging my feet–but I’m still wanting to satisfy my holiday high by playing something up-beat and festive. While there’s a distinct lack of actual Christmas games, there are plenty of games that feature holiday elements and up-beat winter areas that more than satisfy.

In order to carry my Christmas spirit into the digital realm, I’m blowing the dust off of some of my favorite games to play during the holiday season. Everyone’s holiday favorites are going to be a little different from mine, but if you’re looking for something festive to play, I’m more than happy to oblige. 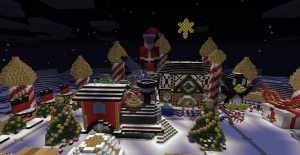 Go nuts in Minecraft! There’s plenty of glowstone in the world so why not light up the winter biomes?

Minecraft? Really? There’s nothing distinctly Christmas-y about the open cubist world, build-your-own-adventure game… right? Well yes, this is true. Other than fan mods in the PC version, there’s nothing distinctly “Christmas” about Minecraft itself, but that doesn’t mean this you can’t use your holiday spirit to change that! Minecraft is a game where you build your own world, literally, and create your own adventure. There are snow textures, ice blocks, etc., so you can easily create a winter wonderland. 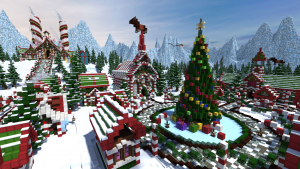 SERIOUSLY. This takes a LOT of time, skill, and effort.

In a game where the only limitations are the ones you establish for yourself, the sky is quite literally the limit! I’m one of those losers that bounces around in the aisles featuring Christmas swag in August while my friends pretend that they don’t know me three aisles down, but I’m also that loser that can’t afford to spend twenty bucks on LED strings of Christmas lights to decorate every inch of my apartment. Minecraft is more or less the best way to let out that festive beast in an affordable, creative environment. I’m not the first to create Santa’s Christmas Village or a little stable for my wise men to find (…those villagers never made it by the way…), but every single village is different.

There’s something relaxing about settling down with a cup of coca to Minecraft’s easy, peaceful soundtrack, a creative mode run, and building. Around the holidays it’s even more fun to challenge yourself to do a themed village. Minecaft is also a game that you can play with your friends. If you’re a PC person, you can jump on a server and build a holiday village. If you’re a console person, you can split your screen into tiny little unbearable cubes and hand the extra remotes to your friends. It’s not exactly a party game, but it’s still highly addicting. 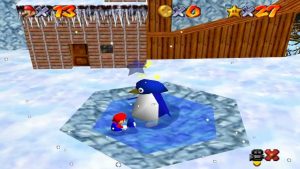 Your baby was on the top of this mountain!? Mother of the year, ladies and gents.

Now, Mario typically always has an icy area in the course of the game, but I’ve found that the nostalgic Cool Cool Mountain compliments the holiday season perfectly. The background music sounds like something that should be playing every ten minutes at any given retail location, there’s snowmen bugging up the bridges and narrow passage ways, there’s adorable little penguins waddling about looking for their mothers, and, of course, the entire course is covered in snow.

I suppose it’s not exactly the most festive of areas, but I can’t help but think of Christmas every time I play through Cool Cool Mountain. There’s several sentient snowmen bouncing around (or, in the case of one of them, blowing you about) that either provide you with one of the coveted stars of the course or serve as an obstacle along your way. The most memorable quest in the area is the sliding race against the fat penguin. It’s challenging, but thrilling. I swear the chubby bird cheats half the time–but I can’t complain. If I wasn’t racing him, I’d likely find another excuse to send Mario slipping down the side of the mountain.

At the heart of this level sits a Christmas tree that you yourself have to light up!

Another throwback to the Nintendo 64, Banjo-Kazooie is like Mario in that it’s a game with a bogus premise, collection-centered gameplay, no logic or reason behind anything, and is amazingly fun. Through the course of the game, the bird-and-bear duo make their way through several themed areas in which they are transformed into shapes more befitting of the environment to accomplish the puzzles within said area. There’s a pirate level, a spooky haunted house, and my favorite–Freezeezy Peak.

This area SCREAMS Christmas from the soundtrack to the massive Christmas tree with talking lights that you must help glow. There are presents scattered through the peak for some of the locals to enjoy. You can even fly around and ramp off of a giant snowman. To complete the level, Banjo and Kazooie take the form of a waddling Walrus that can tolerate the cold water much better than a bear in a backpack can. 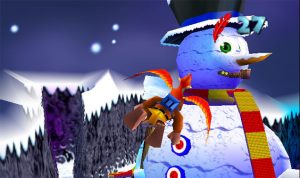 The winter wonderland is perhaps the most festive environment in gaming. The entire level is dedicated to Christmas, winter festivities, and delivering presents. It’s honestly a blast to revisit, especially during the holidays. I’ll also be the first to admit that I will play the level’s music around this time of year.

This is a theme that dots the Harvest Moon games, but it’s always charming to see the town come together to do something as festive as build a snowman.

I’m a huge fan of these games, including the spin-off Rune Factory series. Each game runs through all four seasons, and with each season comes several festivals. The Winter Festivals in Harvest Moon almost always carry a very Christmas-y feel to them. There’s the typical exchanging of gifts, there’s events where the town gathers to build a snowman and eat stew, and of course, there’s the romantic “Stargazing Festival” where your farmer and the marriage candidate of their choice can go up to a viewpoint and watch the night sky in the snow.

Most of the games include a very festive holiday track through the entire season of winter as well, oftentimes with a day and night version. Most are cheerful and up-beat, but some are more somber and quiet. While it doesn’t have the strongest reflections of Christmas, the overall feeling of the winter seasons resonates strong with me around this time of the year. Harvest Moon and Rune Factory are games centering around the strength and unity of community. This time of year brings out either the worst or the best in folks on the street, and the games reflect that very well. 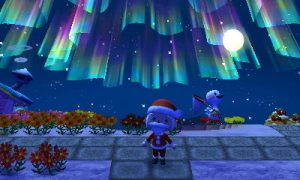 And finally, Animal Crossing. Yup. That game you’ve not turned out since Pokemon X and Y came out. I am a horrible, terrible mayor. It’s a game I forget about most months of the year, but for some reason, around Christmas time, I suddenly remember that I have little digital animal friends that need me to weed the ground, pick up after them, talk to them every day, and do something festive for them. Animal Crossing works in time with our actual calendar and clock, so when the holidays roll around for us, they’re rolling around in the game as well!

The games present a fantasy world that’s casual, laid-back, friendly, and non-threatening. Sometimes it’s really nice to come home from a hard day of shopping and turn on a world that’s filled with happy cute little animals–especially if you had to

Of course… the animal villagers have their own little Christmas traditions. Around this time of year, Jingle the reindeer shows up in town to deliver presents on Santa’s behalf, there’s snow falling, auroras in the sky, and an overall cheery atmosphere that I honestly can’t get enough of.

While these are my picks for best games to play around Christmas time, there are dozens of others out there. These are games I grew up with and still dust off when the holidays roll around. If you’ve got a favorite holiday game, let me know! Maybe I’ll go digging around for it to add to my collection.