Going into Season 5 for Fortnite: Battle Royale (FBR), I had high hopes for a new map, some decent fixes, and just the same all-around sense of joy and wonder we got with the last season’s launch. And while we didn’t actually get a brand-new map, Epic has managed to make enough new changes to the current map to make things again feel fresh, while not alienating veteran players who know and love the familiar terrain. 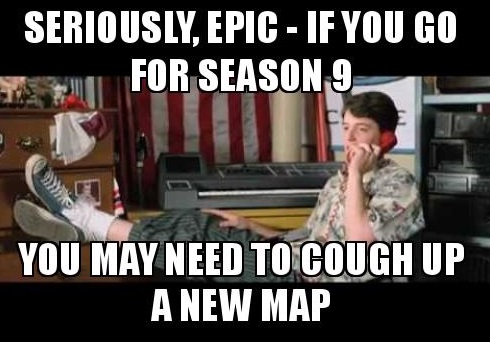 This season’s theme is “Worlds Collide” which might not make a ton of sense out of context. To back up: at the end of Season 4, there was a one-time, in-game event where a rocket was launched. Some people thought it would destroy a named Place of Interest (POI) like Tilted Towers, for instance. Instead it seems that the rocket broke some plane of reality, and cracks in the sky appeared along with small rifts that destroyed parts of popular landmarks. Once Season 5 launched, players found out that these rifts actually pulled entire new sections of map, seemingly plunked down from the sky with broken roads and edges to show for it. In addition several new POI’s were scattered across the map, as well as several odd additions that could only be explained by the rifts being responsible. While I was initially disappointed with no new map, props to Epic for weaving some actual storytelling into why the map looks the way it does this and last season. 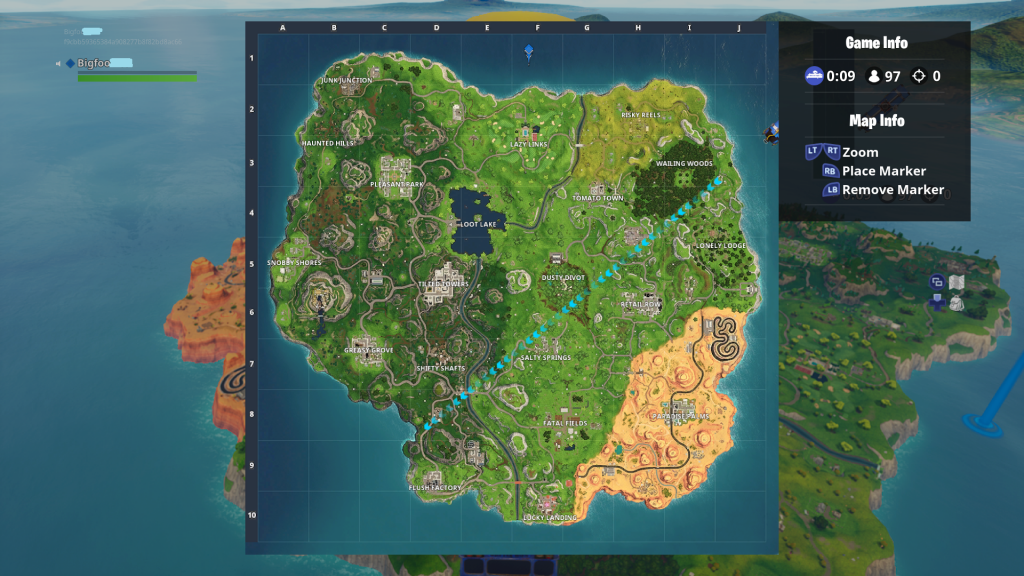 The most obvious map change is in the southeastern corner, where Moisty Mire used to be. Now there resides Paradise Palms, a slightly smaller vacation-esque Tilted Towers, as well as several other new places to drop and find loot. 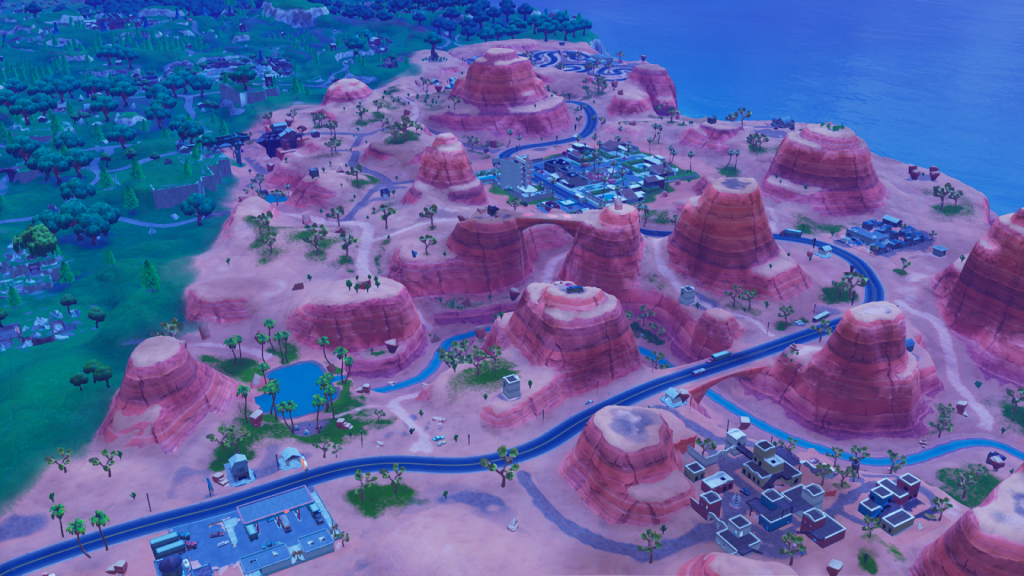 The dirt track on the coast usually referred to as “Gus” has been upgraded to a full paved track, complete with timers and golf carts- players can now load up a full squad in one vehicle and roll across the map. Carts are rare, and breakable, but don’t seem to make you suffer fall damage when dropping from great heights, like a rift you might have driven into just for kicks to see what happens. That’s another thing: mini rifts have opened across the map that players can jump into, which results in you being dropped from the sky high above where you entered the rift. Like many of the additions in this game, it’s hilarious, sometimes useful, but overall really fun to do. 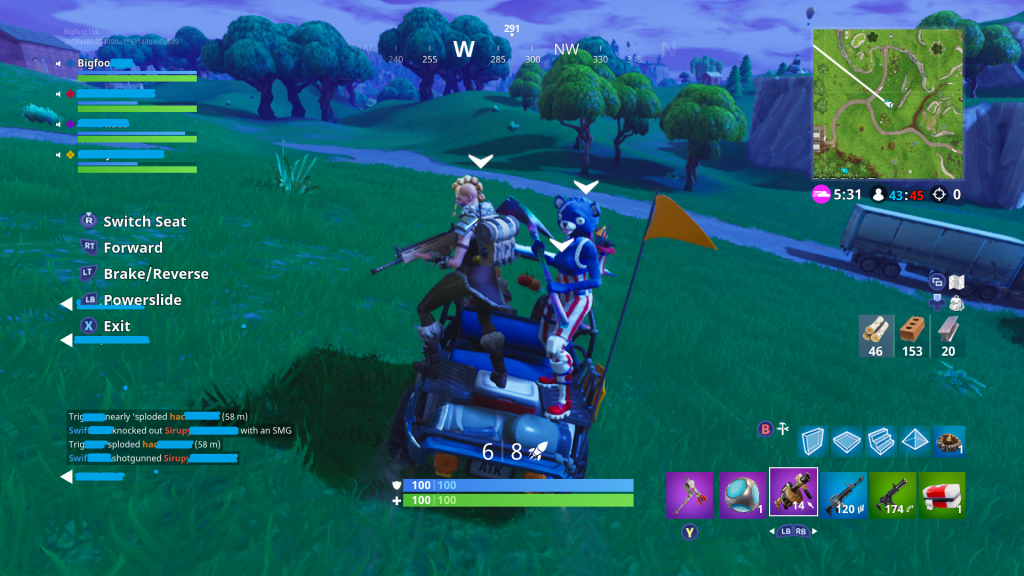 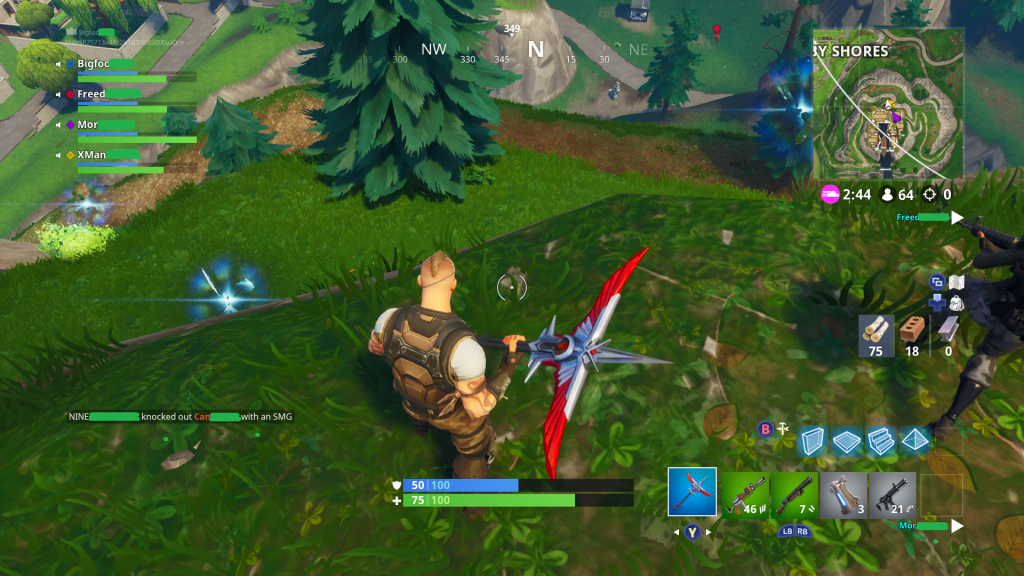 Jumping in those blue shimmering rifts will result in you being dropped from very high up, and parachuting down. Driving into one in a golf cart will result in the same thing, but with more hilarity.

Other small changes makes it seem like Epic will be continually adding and editing the map again this season, such as snow being visible above the Viking village, and what seems to be sand seeping out of some of the rifts in the sky. The rifts have also started to take on an aurora-like purplish hue. Also, Dusty Divot has completely gone back to nature – the crater is now covered in a thick grove of trees that has even overtaken the facility that was built there last season. It’s interesting to speculate what they could do with other locations in the future as they continue to tweak and improve on the map. Maybe let Loot Lake dry up? Or have a pirate-themed beach show up in the watery southwestern corner? Only time will tell. 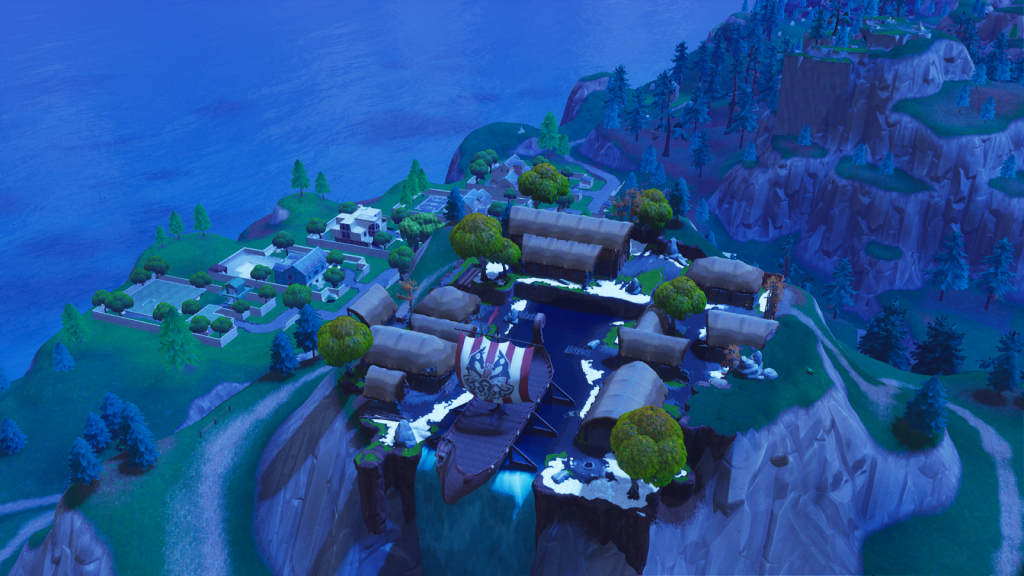 Besides the map changes, Epic made some subtle tweaks that might not be apparent at first to the Fortnite formula. First off, they added a delay when swapping weapons, effectively ending the “Double Pump” strategy. Double Pumping was done by having two pump shotguns in your inventory and rapidly swapping between them in order to dish out high damage without suffering the slow reload of each shell into the shotgun. 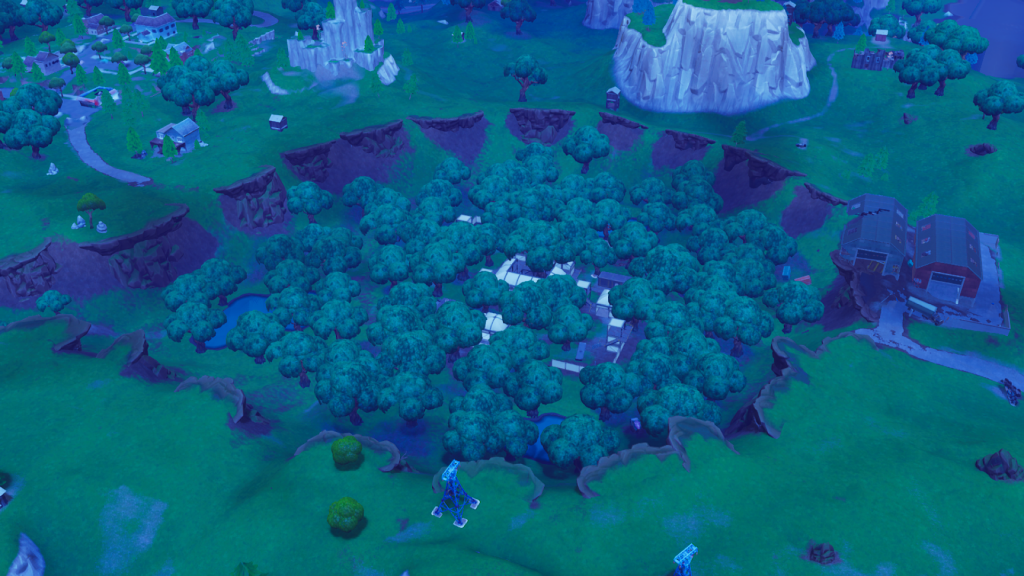 Dusty Divot is now as dense of a forest as Wailing Woods.

Another not-so-obvious change is how the storm works at the end of the match. In the last few circles, instead of just getting smaller the storm has a chance to force players into an area already claimed by the storm, making them move with it. I can say from experience this is an exciting change that makes you abandon your built-up base, and in a squad game takes high levels of communication and strategy. This is a great change that will keep endgame from just being a handful of players shooting at each other out of their 1×1 towers as the circle shrinks. 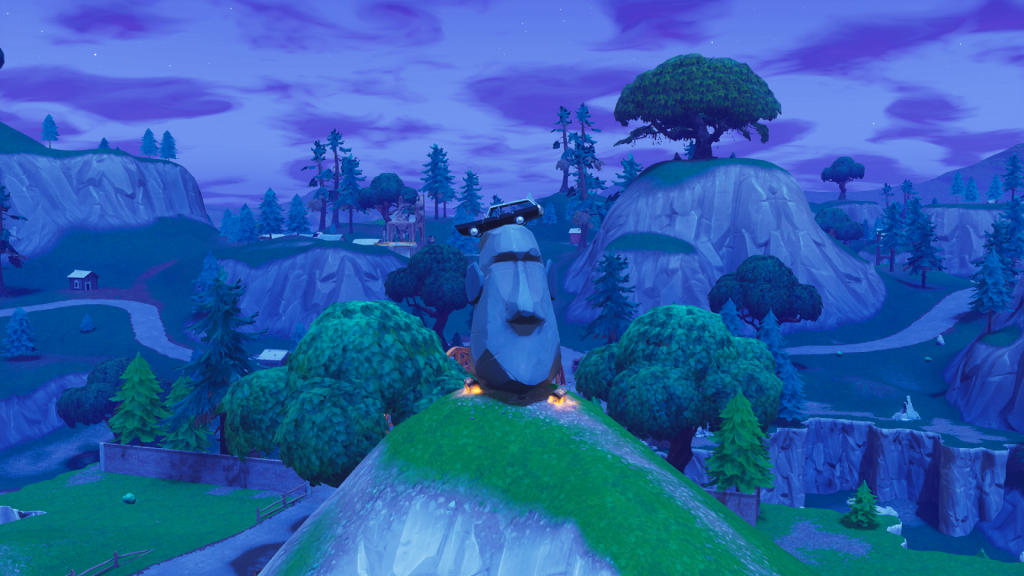 Easter Island statues have popped up all over as well, along with a few chests around them.

Epic also added interactive emotes this season, building off of season 4’s “Spray” emotes. Now, once they’re unlocked from the Battle Pass players can shoot hoops, throw beach balls, and make golf shots – and baskets and putts that go in show up as stats in the battle feed. It might be a battle royale, but Epic keeps giving players reasons and different ways to have fun.

Speaking of the Battle Pass, there’s a wide variety of combatants to choose from this season, From traditional military-looking guy to Viking inspired warriors, and many in-between including an office worker, lifeguard, biker, and a…golfing graffiti enthusiast? Not sure where they got that idea. The great part is they’re also continuing the ideas they had with a couple of the superhero skins last season, where once they were unlocked you could level them up further, unlocking more armor pieces and colors as you go. The top tier skin, “Ragnarok” has some seriously cool unlockable styles. 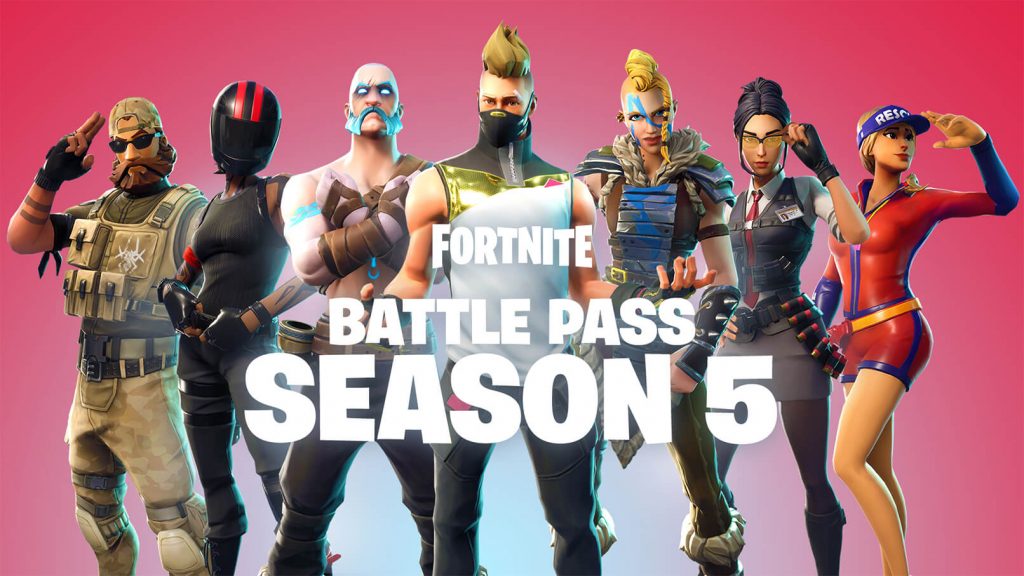 What’s up with that guy in the middle? The name of the skin is “Drift” but he’s like, if Banksy was really into golf and anime…?

The last subtle changes were the fonts in-game for harvesting and the Victory Royale screen, as well as a small window of slow-motion being added with the final killshot. Now when you try to pull off that golf-cart-ride-through-a-rift-no-scope-720 and fall to your death, the last guy alive will get to see your final moment in slow-mo glory. I can’t wait to see what else Epic has planned for Fortnite: Battle Royale‘s 5th season, but so far they’re off to a great start. 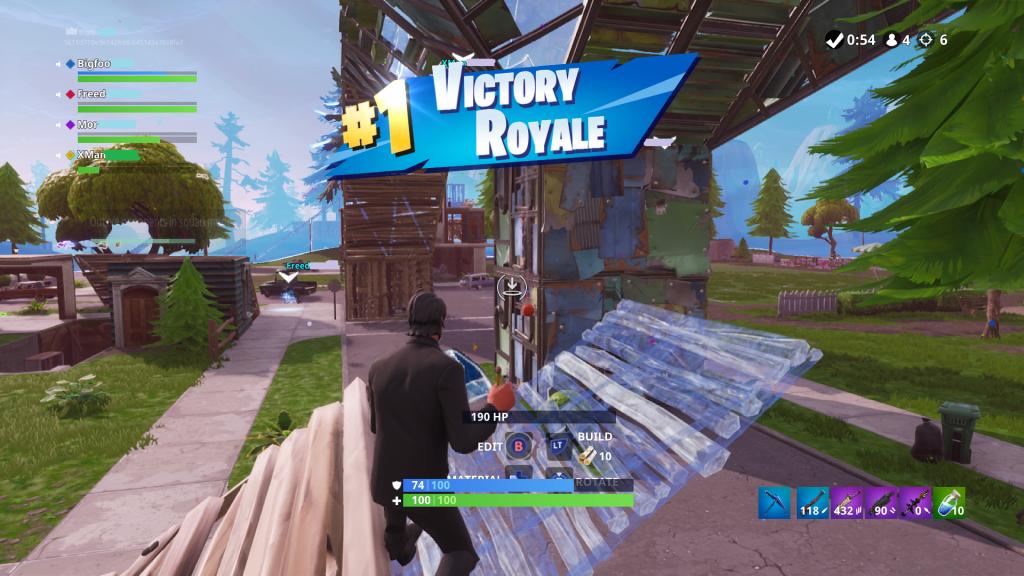