Did I hear a Niner in there?

Fortnite: Battle Royale Season 8 saw the meme-ification of the island with pirates, ninjas, and dancing bananas joining the fray. It also saw the arrival of a volcano, among a few other changes, and new Points of Interest (POI).  We also got to enjoy a few new Limited Time Modes (LTMs) such as The Floor is Lava, Planes only, and Avengers Vs. Thanos. At the end of the season, they held another one-time in-game event, where the volcano blew it’s top, leading to the destruction of Tilted Towers (something they’ve been teasing/threatening to do since it was built), Retail Row, and the volcano itself. The event happened the weekend before the new season started. 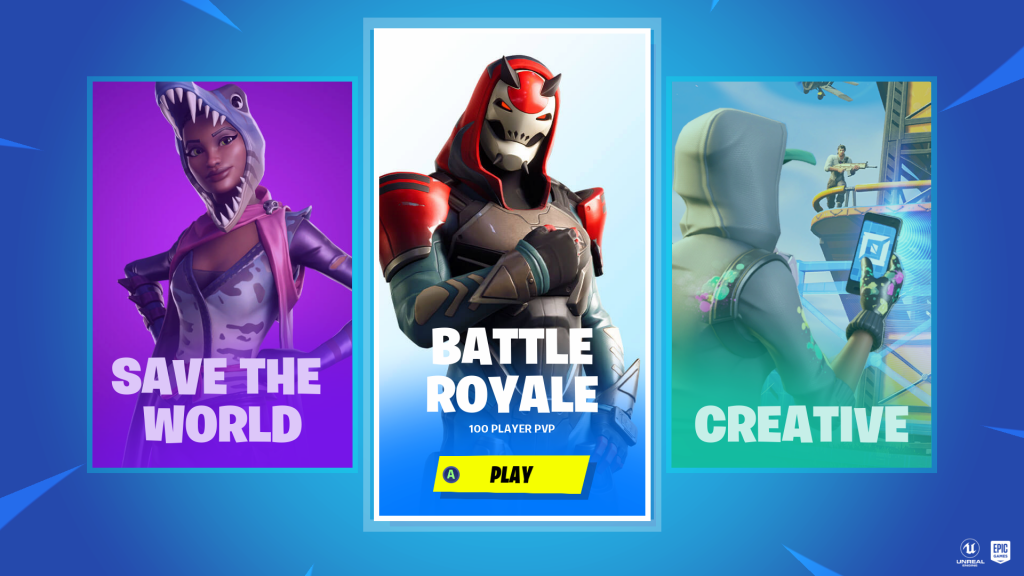 Season 9: The Future is Yours

It was all a troll by Epic. On day one of the new season, Tilted has been rebuilt as Neo Tilted, and Retail is now Mega Mall. I have many questions revolving around the passage of time and poor Jonesy and Peely in the bunker, but I know it’s a fool’s errand to try and parse the lore at this point. I’ll just reiterate my point from the last Fortnite article that it used to feel like the seasons were linked in lore and causality back in seasons 4, 5 and 6, but when we hit the wintry Christmas season (7) everything went off the rails. Now, it’s definitely a continuation of the last couple seasons where anything goes and it’s all about goofy mashups and the rule of cool over making sense, if you like this game as much as i do you will also be interested in the best fortnite weapon guide you can find online. 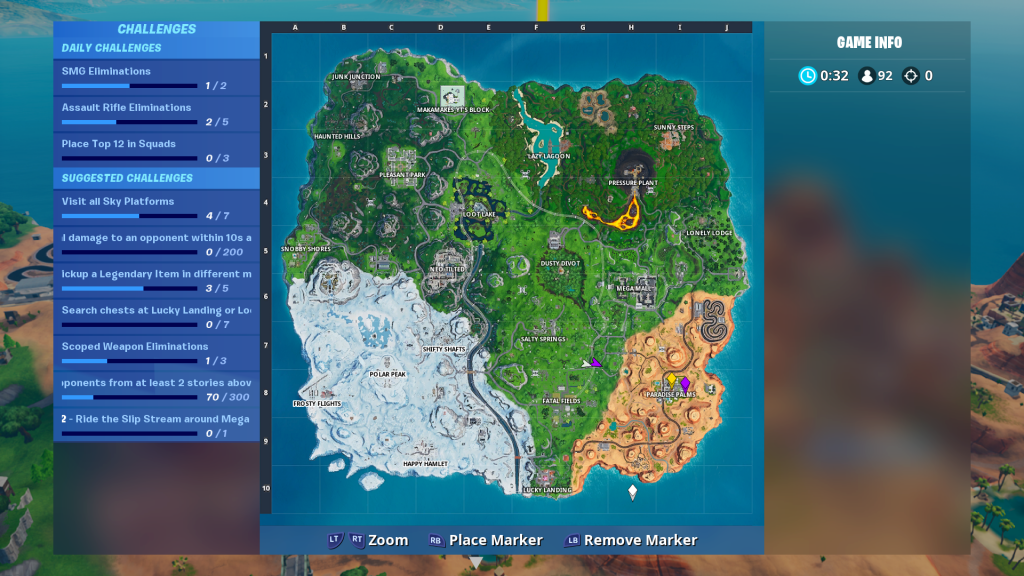 If you look closely you can see the slipstream route around Tilted, the Mall, and the middle.

The Battle Pass has a smorgasbord of new outfits, including a couple cool ones that unlock right from the start. Rox and Sentinel start the pass off, or, as I’m calling them, Brunette Samus and Gundam Suit Chicken. I also like that Rox levels up her gear as you gain experience and complete challenges, because I’m not all about a 3rd-person game with a character running around in a schoolgirl outfit. Bunker Jonesy also unlocks if you opt for the +25 tier Battle Pass, which I thought was cool at first, but from behind he just looks like base-game Jonesy…hmm. 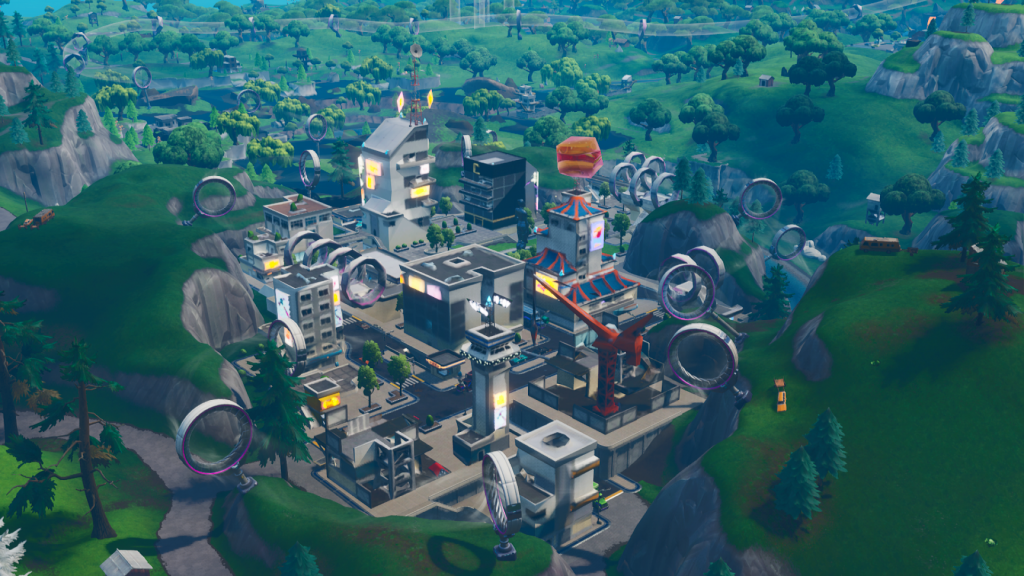 Neo Tilted, looking to the Northeast.

The upper half of the Pass is a mixed bag, in my opinon: Vega (looks like Huntress with modern clothes, meh) Stratus (Spitfire base character with a hoodie), Demi who looks like Ada Wong with a sweet Iron Man arm, and Vendetta, A.K.A. Neo Drift. I like some of the effects that you can unlock for him, but if I counted all the characters that already look like Vendetta, it would probably make up half of my locker. Please, no more robots or dudes-in-masks, Epic. 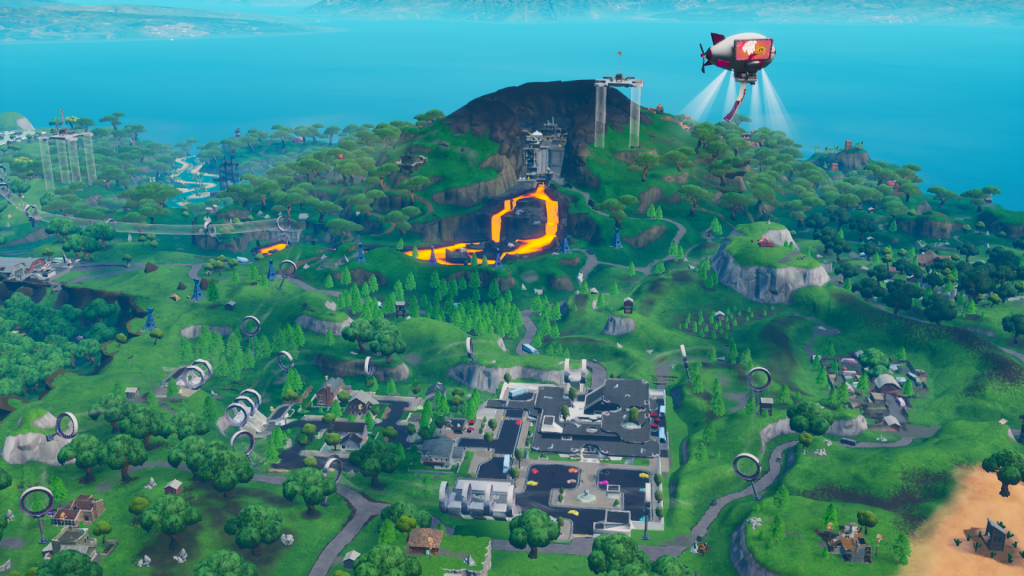 Mega Mall in the foreground, the new volcano area and a sky base in the back. Sadly, you can’t land on those blimps, I tried.

The other big change in the game and map are the inclusion of sky bases, and the slipstream. Around both the new neon POIs and the center of the map run slipstream courses where players can jump in and fly around on a stream of air that goes at a pretty good clip. It’s still possible to get shot, but next to planes, it’s the fastest way to get around the map. Sky bases are floating platforms around the map where players can float up and get an elevated view before using fans on the base to bounce off with no fall damage, just like using the zip lines. 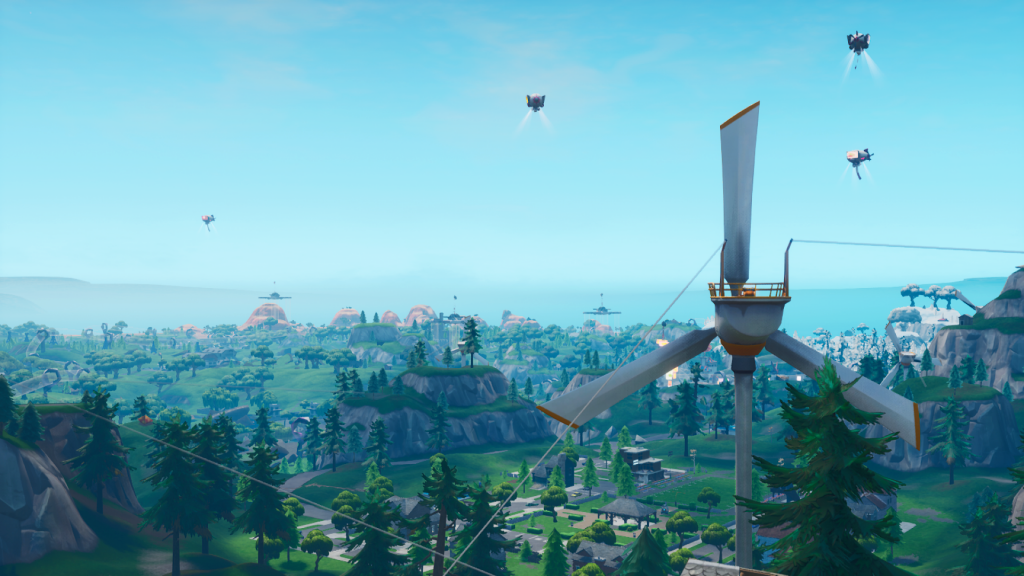 While these new mobility options are interesting and will undoubtedly make for some cool clips from top streamers (you can take vehicles in the slip-stream), it’s getting awfully cluttered out on the map. It’s boring to keep reading the same thing every season, but I’m gonna keep at it until they do it or I stop writing about FBR: it would be great if they just made a new map. 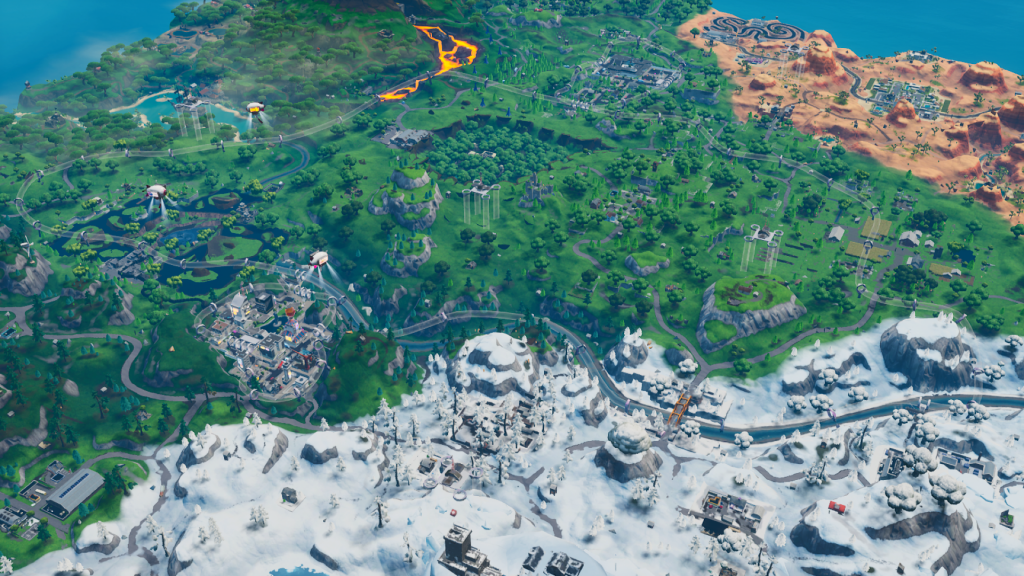 A different POV on the main slipstream route.

The last big change is the inclusion of Fortbytes (I kind of hate that I had to type that word). Fortbytes are CPU-looking pickup items that can be found in-game or unlocked with progression throughout the season for things like top 10 wins or enemies defeated.  According to the patch notes, as you  unlock them, you’ll reveal an image, and if you unlock all 100 of them, you’ll get special rewards and unlock the lore of season 9. 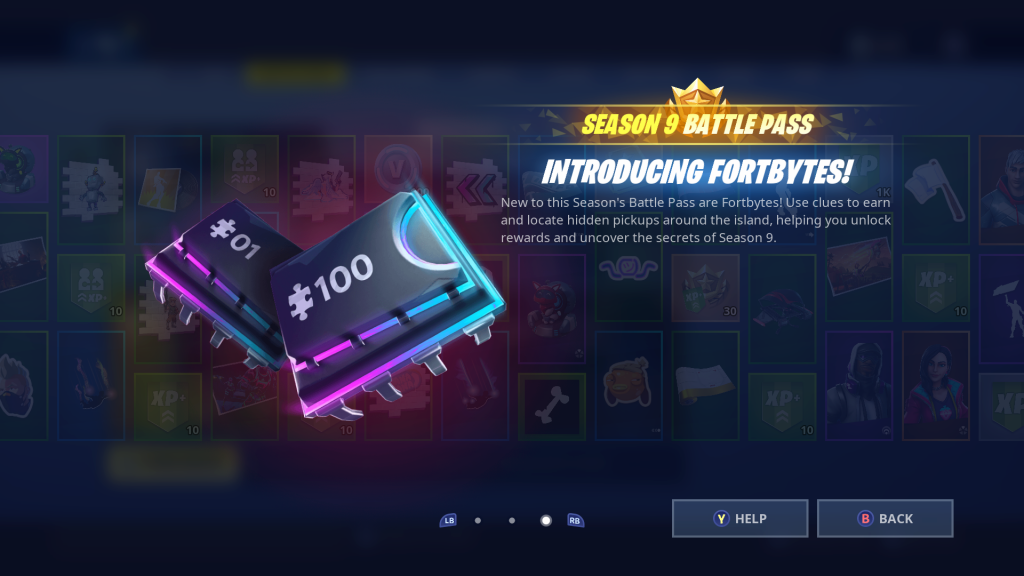 On a personal note, Season 8 was the first season since I started buying the Battle Pass back in Season 3 that I didn’t hit tier 100. I played several other games over the course of the season, and at times, it just felt like if I wasn’t playing with friends it was either a bit of a waste, or just checking off challenge boxes instead of enjoying the game. The addictive fun is still there, but when I die for the 39th time of the night because I drew an outline with my gun around someone who rushed me and destroyed me, it makes me want to play something with tight controls and the ability to shoot at my enemies and hit them every time. Epic used to do shooting test modes where they tried to fine-tune the aiming and accuracy of the guns, and I wish they’d get back to it. Until then, you can find me skulking around the outside of the map, hoping the top 5 players all simultaneously blow themselves up so I can nab a sweet unearned Victory Royale.

Season 9 of Fortnite: Battle Royale runs from May 9th to August 1st. 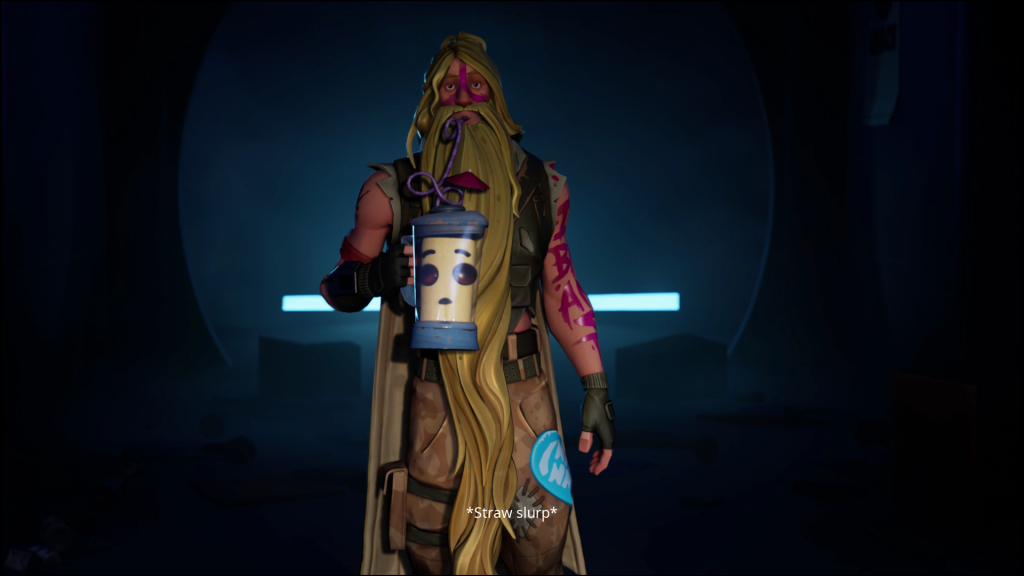