Last week, one of the biggest conferences for gamers, E3, was held in LA. Many games were shown, and excitement grew in the gaming community. On the 3rd and final day of E3, the attendees were in for a surprise. The SteamBoy was shown off in a 43 second trailer. Even though the trailer didn’t show much, and was shown for the purpose of building hype, the developers did talk to “The Escapist” about some of the specs we will see in this portable Steam machine. 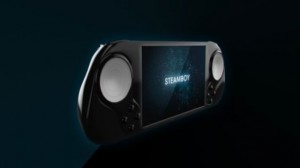 “SteamBoy won’t be as powerful as other announced Steam Machines in the same way [the] Nintendo 3DS or PS Vita performance is not comparable to Wii U or PlayStation 4, however, it will be possible to play the majority of current games in Steam.”

The SteamBoy aims to house a Quad-Core CPU, 4GB RAM, 32GB built-in storage, and a 5” 16:9 touchscreen. It will also feature WiFi and 3G capabilities (maybe 4G in the future), taking full advantage of Steams In House Streaming. Things are bound to change since the SteamBoy is early in its development, but the guys behind the SteamBoy plan to release this device in 2015. As we find out more, we will try to keep you guys posted.

So what do you guys think? Will the SteamBoy be a successful handheld device, beating both the 3DS and Vita? Why or why not? I am interested in hearing all of your opinions!