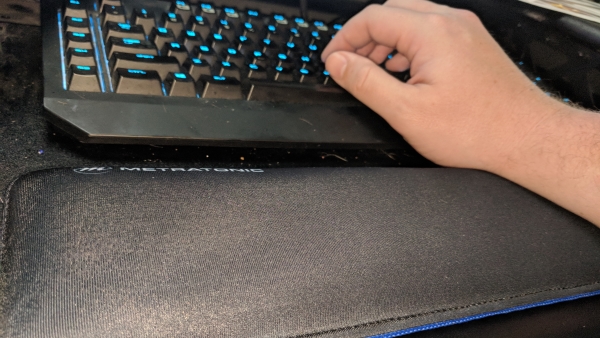 When Metratonic first contacted us about reviewing their line of premium wrist rests, I was intrigued. As a software developer, gamer, and writer, I spend the majority of my day in front of a keyboard. Anything that can make my time more comfortable (and, ideally, healthier) is always an option worth checking out.

When your Metratonic wrist rests are delivered and you tear into the box, the first impression can be a little underwhelming. They ship in a simple, cheap white cardboard box enshrined in thick plastic with the product logo stuck on it. They do include a nice branded microfiber cloth with each wrist rest, which I wasn’t expecting. I’ll grant you: Metratonic is a small company trying to make a name for itself and keep its costs down; to their credit, their product is a solid one.

Traditionally, I’ve never been a fan of wrist rests. I’ve tried several over the years, and none were ever able to strike that point of comfort I needed to warrant losing the additional desk space. Metratonic has converted me, though. Where others I’ve used in the past have been made of rubber and gel-like substances (I know, I’ve been out of this market for a while), Metratonic’s wrist rests are made of thick memory foam. I was genuinely skeptical of anything a wrist rest could do for me, but after a couple weeks of gaming, writing, and web browsing, it feels like a significant portion of my setup is missing without them.

Metratonic makes wrist rests in three sizes, though I believe their goal is to have two for each customer. Their “large” wrist rest is intended for using with your mouse (though one of their founders admitted to me he uses one as an elbow rest as well). Again, I never thought mousing with a wrist rest would be something I cared for, but I’ve come to enjoy having the added comfort when I’m working. I will say that it may not fit for all situations. I noticed that when I played games with more intense mousing requirements like Fortnite or PUBG, it felt a little restrictive to me.

Their two other sizes, their XL and XXL, are intended to be used with your keyboard. The size of your keyboard and your desk setup will determine which is a better fit for you. I tried both and, for my setup with a Razer BlackWidow Chroma, the XXL was a better choice. Much to my surprise, typing and gaming both feel great with the added support and comfort. Surprisingly, both the XL and XXL are priced the same too.

The Metratonic wrist rests feel like premium products. They have a sturdy base with a grippy surface that helps keep it from shifting around on you. The cloth material your wrists are in contact with feels smooth and silky, almost like microfiber. The whole thing even sewn together, keeping it durable for years of use. 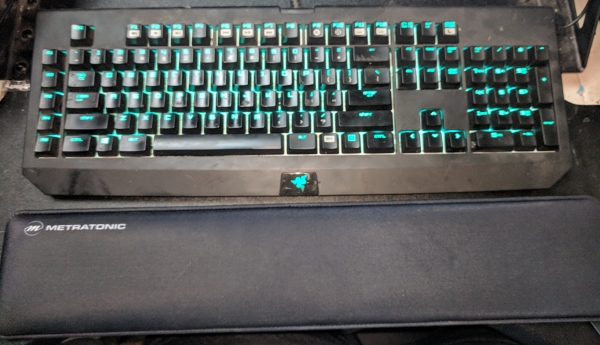 My complaints with the product line are far and few between. I tried pouring water on one (since they sell it as water resistant) and while it absorbed a little liquid, it was still comfortable and quickly dried out. As mentioned earlier, for my own style, intense FPS sessions were more comfortable without the wrist pad. They currently only offer their wrist pads in solid black, too. It also feels odd that they’re only selling their products through Amazon, but if you’re a Prime customer, that means you get free shipping.

There wasn’t much I didn’t appreciate about Metratonic’s premium wrist pads. They’re way more comfortable than I was expecting and the construction quality ensures I’ll have mine around for years to come. If you’re someone who spends a lot of time on a computer, Metratonic’s wrist pads could go a long way toward making your time and experience more comfortable without a major hit to the pocketbook. They’ve converted me. I’ll have one of these in front of my keyboard for the rest of my life.

Products for review provided by Metratonic