Sonic runs a lot. Sonic goes to lots of places. Eventually he ran to BioWare HQ and got himself an RPG for Nintendo DS. I know you’re probably thinking “Sonic’s all about Platforming and running and fast right? How’s that in an RPG?”. Well, let’s get to that! 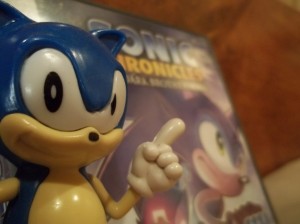 Developed in 2006 by BioWare and published by SEGA, Sonic Chronicles: The Dark Brotherhood takes a different road than Rush or Colors . Starting off, you’re gonna find yourself in something like a hub that’s huge. You walk around (using the stylus) to get into rooms, find characters, get new missions, help an old guy out, whatever can get you those blasted Chaos Emeralds! 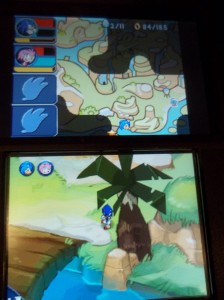 Aside from that is Combat. The “good guys” are in the foreground with the baddies in the back. 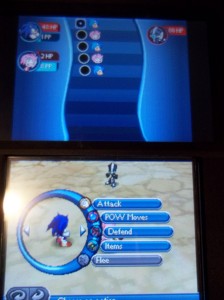 You choose which character attacks which enemy, gives an item to which character, or defends, or more! At first, this new formula lost me. But the farther I got the more I got into it, especially towards the end. As you go along you will collect POW candy, drinks or even gum that will give you POW Points (you can also gain them in battle, especially when defending). These points will be used for POW Attacks. As the name suggests, these are POWerful attacks unique to the characters that cause more damage (usually) than standard offenses. You have to unlock these first by using special points you get in battle (I know it sounds complicated-points to buy it and points to use it and AHHH, but it’s actually a good and smooth method). These will definitely come in useful for those tougher enemies that get worn down only one health point by standard attacks. You also have abilities you can equip that are used in battle that affect your attacks or health. And, even more, you have an inventory of items (like health or reviving) usable during battle. You can also defend or chicken out (“Flee”, where you run from the enemy, jumping over boxes and running on boosters to avoid the enemy; very useful when you just want to make progress and not waste time battling). 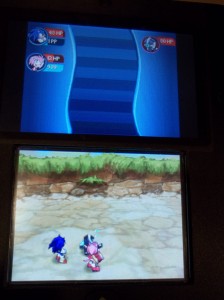 Different characters can access other areas in hubs that others can’t. Knuckles can climb and fly, Sonic can Spin-Dash and speed run, Shadow can warp, ect. One nice thing is that Dr. Robotnik is playable in this game (and even calls himself Robotnik-something he doesn’t do often!) and has some great attacks! Sadly, Rouge is here too, and if you know how she dresses, you’ll see the wrong in it. Shadow is here, and Omega is too, but I stupidly didn’t search for him in Metropolis, a terrible thing I did there. The battles after I left him were pretty tough. Thirty minutes of wearing down the enemy one health point at a time (and more for POW Attacks). I assume that Omega would have blasted through those rats!! I had a few battles of thirty minutes wearing down enemies, and that may sound miserable to you, so just do yourself and Omega a favor and go find him. It could be the reason I spent all that time. Speaking of time, I beat the game in 19 hours and 7 minutes, which is almost three times how long it took me to beat Colors (7 hours and 6 minutes playtime as of now, but I’ve replayed levels and Bosses) . The day I finished it, I played for 3 hours, though, according to the records, I played it nearly four hours one day. Just goes to show you that this is no game to be beaten in one weekend, and I wouldn’t recommend trying either, as playing too long in succession makes the game feel repetitive and boring. But, I do get obsessive with my Gameplay (Especially with my favorite blue Hedgehog!!) and tend to overdo things. So the less-obsessive Gamer (AKA a person with a life) may never experience this effect. I did begin to love the mess out of it towards the end, even though I prefer to fight Robotnik’s baddies more than Lord Ix’s (He’s an Echidna that’s evil). I found that the battles (like the final one) where Sonic just fights the enemy with one really long battle move set were much more fun than the standard battles. These battles I speak of have Sonic and enemy only fighting one way, but it’s a complicated and long way. There are many different things you have to interact with on the touchscreen that form one massive attack that knocks the baddy on its back.

Music you ask? Most tracks are remixes of Sonic 3D Blast Tracks (both the SEGA Saturn and SEGA Genesis Versions!) and I recognized the track for “Big Arms” remixed here; also lots of elements from SatAM, including SWATBots, Roboticization, and a city that sort of resembles Robotropolis.

As this is my first RPG, I can’t compare it to this or that other RPG and say it’s any better or any worse. I myself found it a fun game, even though it threw out the regular Sonic formula. That fact may make it better to someone else. But if you dispute, you have the chance to rate this game yourself, but I have the override score-MUHAHA!

Thanks for reading, and give this game a chance if you can pick it up for a good price! God Bless y’all!

Though it throws out the whole Sonic method, Sonic Chronicles still holds on to the quality SEGA is known for.