Not the anime lo-fi stream you're expecting. 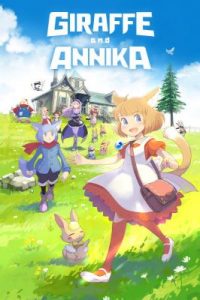 If there’s a cute girl game to represent, I’m always near! We’re back to look at atelier mimina‘s 2017 debut title, now ported to PC, Giraffe and Annika. I’ve been looking forward to this one after hearing it was being directed by Elite Beat Agents character designer Atsushi Saito. EBA was a darling rhythm title for the Nintendo DS, and Saito brought that influence over to his new title, with a surprising collect-a-thon package included. 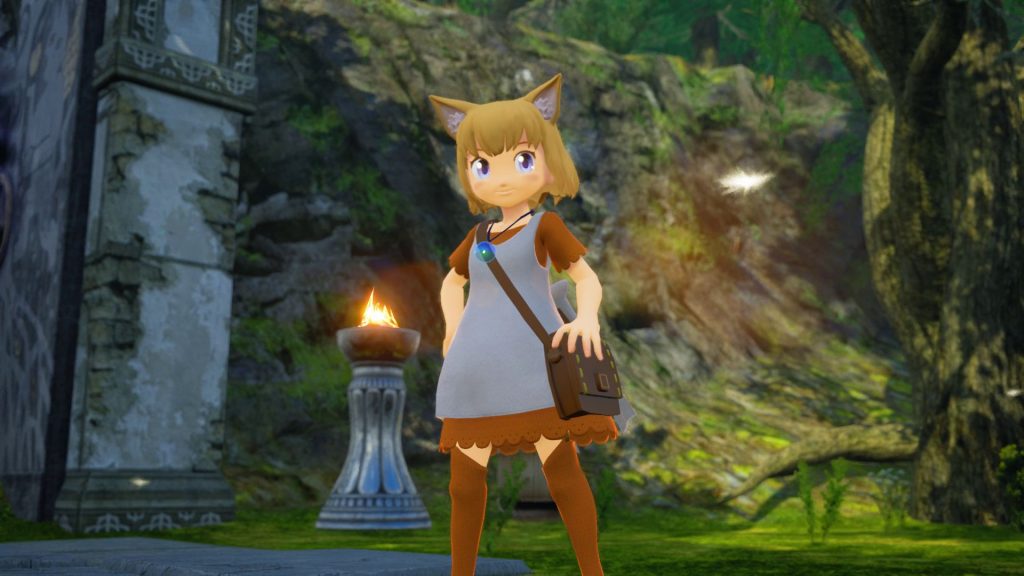 Language: There is only one instance of “hell” being used in the game.

Suggestive Themes: The titular Witch of the Forest shows up in two fairly revealing costumes at later points of the game. One is a bikini swimsuit with a pareo. The other is a cowgirl outfit with just chaps. 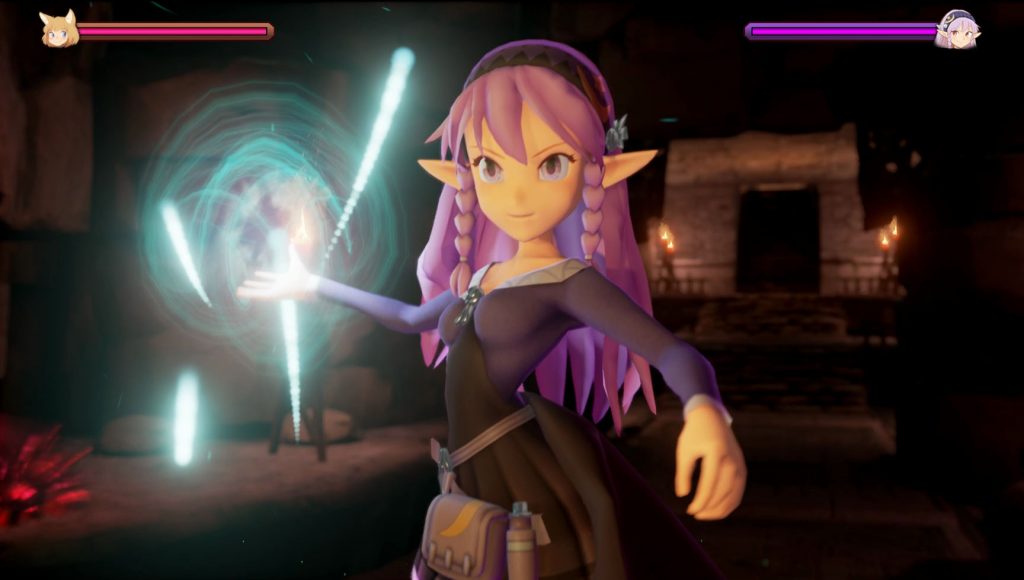 There isn’t much to describe the circumstances behind Giraffe and Annika. Atsushi Saito and his studio, atelier mimina, bring their debut indie hit across the pond to the US. Surprisingly, Giraffe and Annika was a Switch title first, which makes the move to PC for its Western release a bit of an odd choice. I was really pumped to play this after hearing it would have rhythm gameplay. It doesn’t quite fulfill the melophile in me but it does deliver a neat collecting adventure. 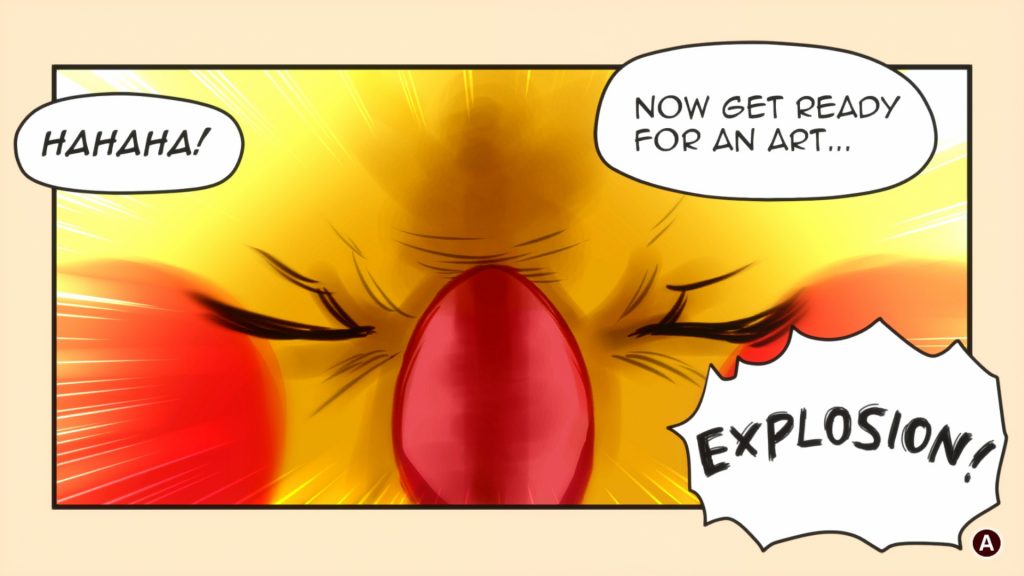 As mentioned before, what threw me off the most as I kept playing was that there isn’t as much rhythm gameplay as I was hoping for. But the exploring portion is quite pleasant. You play as the titular girl Annika (not given top billing for some reason) who wakes up on an island with no memory other than her name. The other titular and blue-haired boy, Giraffe, approaches her and requests she find the three jewels hidden on the island…for some reason. 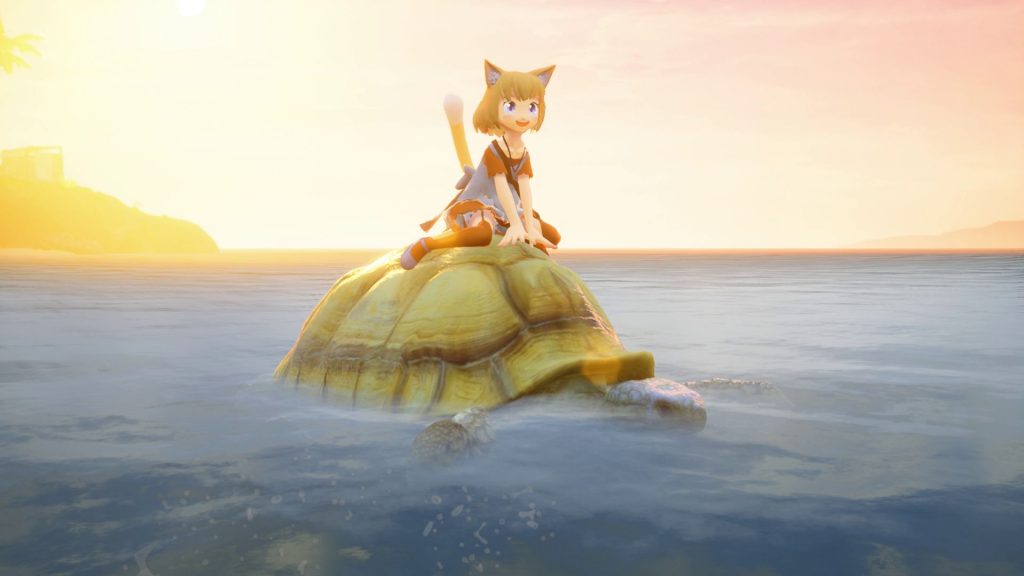 Surprise! Giraffe and Annika is mostly a collecting game with rhythm boss battles. You explore Spica Island to become friends with the inhabitants, traverse perilous dungeons, and fight off a particularly peeved witch while trying to regain your memories. You’ve even forgotten how to jump! But Annika is hardly fazed by any of these obstacles. Giraffe and Annika is a charming romp of a game that won me over pretty easily despite some glaring flaws. 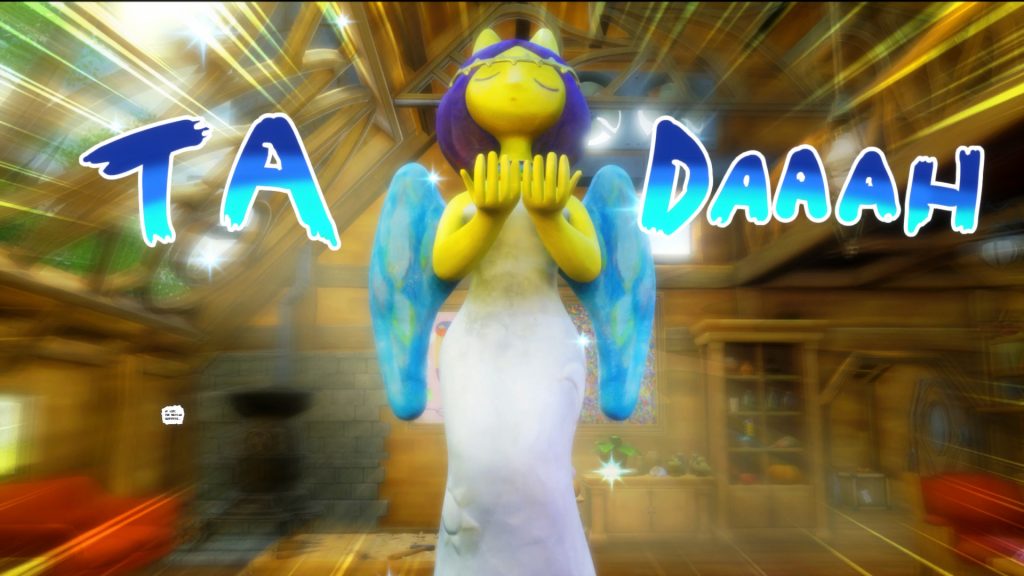 As a great man once said, what matters most is if you enjoy what you do.

Disclaimer: The version I was sent appears to be a near-final state for the Steam port. I cannot say that my impressions will reflect the final version on release. But I do want to say that in spite of what I have to say, I still very much enjoyed my time with Giraffe and Annika.

The majority of the game is exploration. There are some puzzles you can solve and collectibles you can find to unlock things like costumes, art pieces, etc. I’m not the biggest adventure platformer player, but the gameplay here is pretty basic. You unlock three simple abilities as you progress through the game, the last of the three being the most useful: the super dash. Also, the island itself is fairly small despite its scale, so it’s not difficult to remember all the key locations. However, I had trouble finding one particular set of collectibles since they’re designated to only one area and are nearly indistinguishable from the ground. 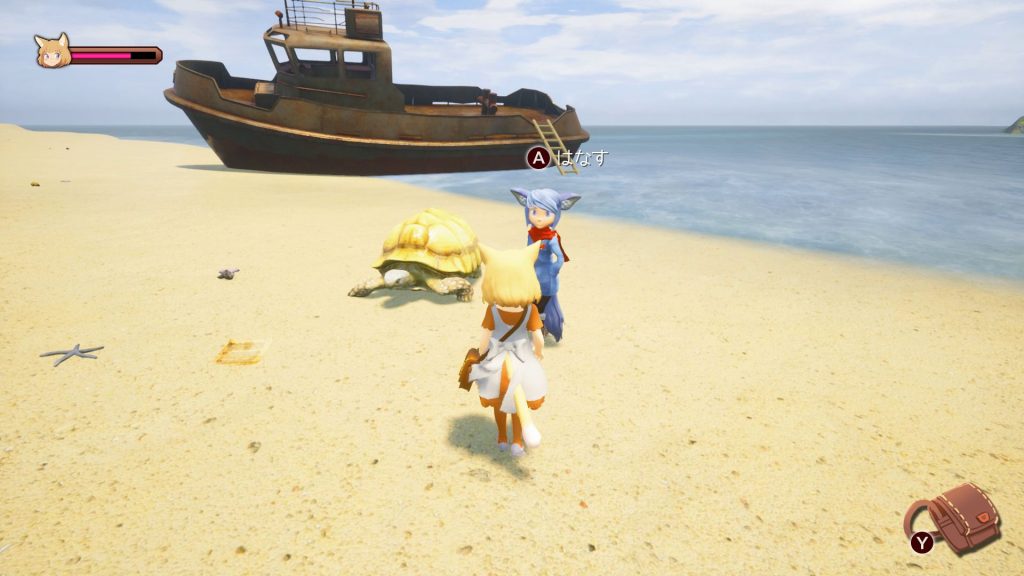 So I have to find yellow seashells on this beach…

The story is fairly simple. As you complete dungeons, comic book/manga-like cutscenes play out to advance the story and give you your next objective. The story isn’t exactly unique, but it definitely picks up near the third and final act of the game when you traverse through two very fun mini-dungeons. The third act is where I enjoyed the game the most, which is a shame because talking about it would spoil events of the story itself. I will say that near the end the story starts to come together well enough that I left satisfied. 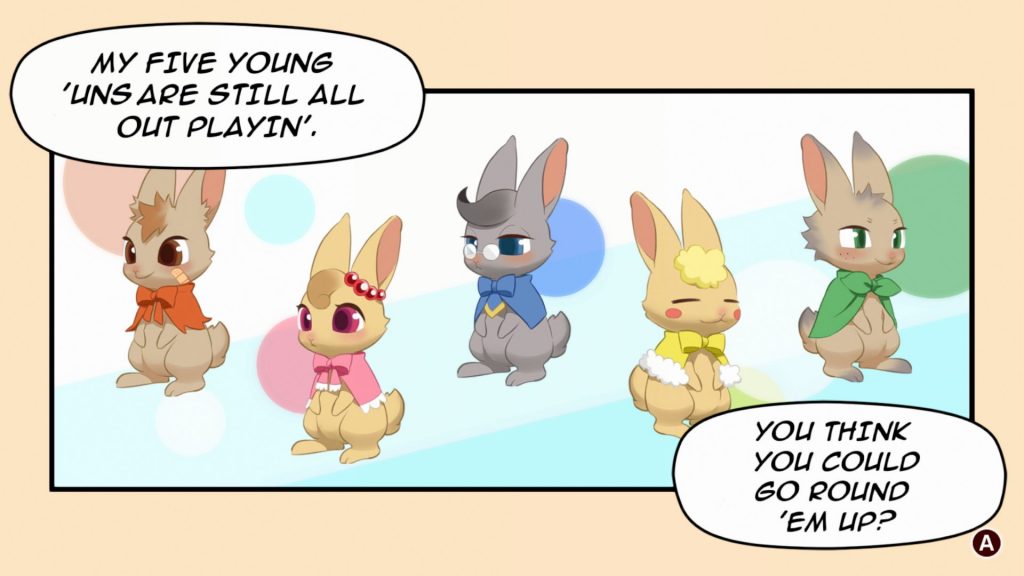 The dungeons are linear as well. You basically traverse through each dungeon while avoiding enemies, as you have no way to attack. The rhythm gameplay kicks in when you reach the boss fights, and is the best part of the game. Lily the Witch introduces herself in the first dungeon and tries to stop you from taking the jewels and in later dungeons she has giant creatures on her side. 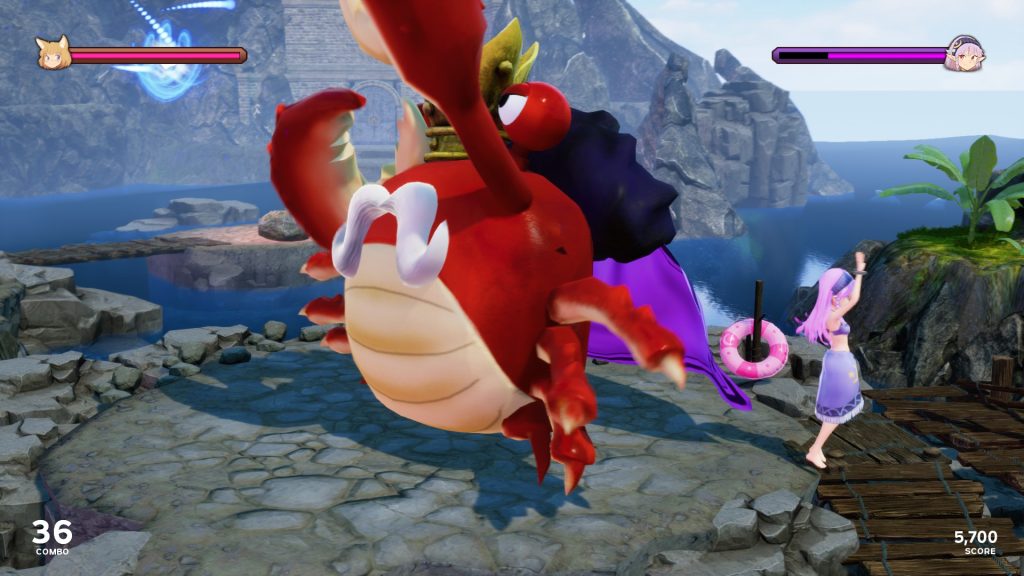 Watch out! They’ll entertain you to death!

The rhythm gameplay is handled by having two tracks that you move between while you tap or hold down buttons to hit notes. Oddly, you can choose the difficulty of the rhythm segment for each boss from Easy to Medium to Hard. I chose Hard because I wanted to see how difficult the tracks get. While hard was doable, it’s not required to beat the game. I also had some issues in these segments with the game freezing. These freezes would come in sporadically but would almost always disrupt my note combo. 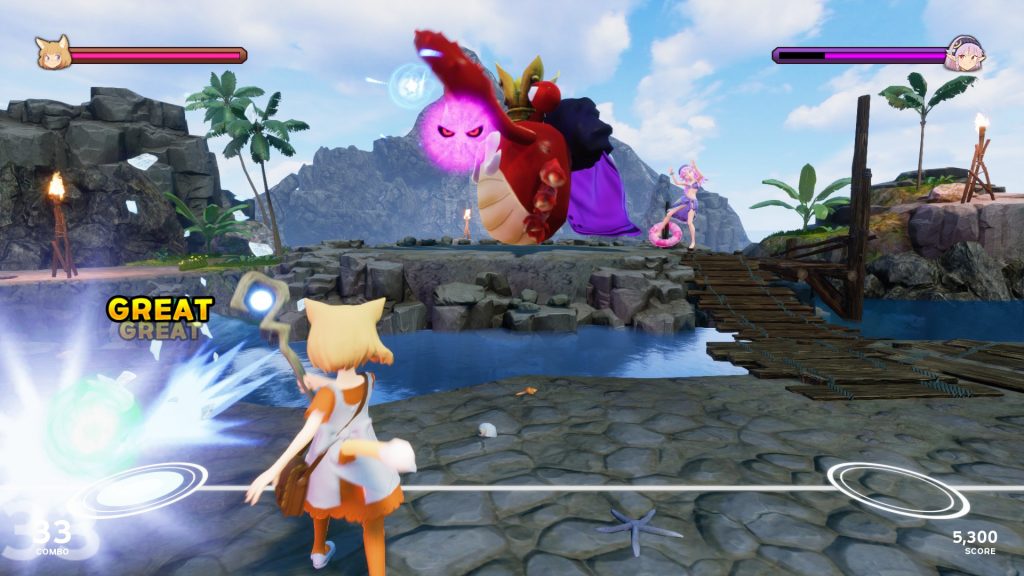 I’m playing on Normal here. But on Hard, these mean purple things become more distracting for maintaining a perfect combo.

This almost came to a peak in the last boss fight, which was the only one I had to restart because of some tricky note placement as well as a visual clash between the notes and the environment itself. I can’t show screenshots of the last fight as it would reveal spoilers, but the environment in the last boss fight makes it actually difficult to distinguish the notes and hazards that come your way. This is just one of many examples in the game which show that atelier mimina did not master their game engine perfectly. 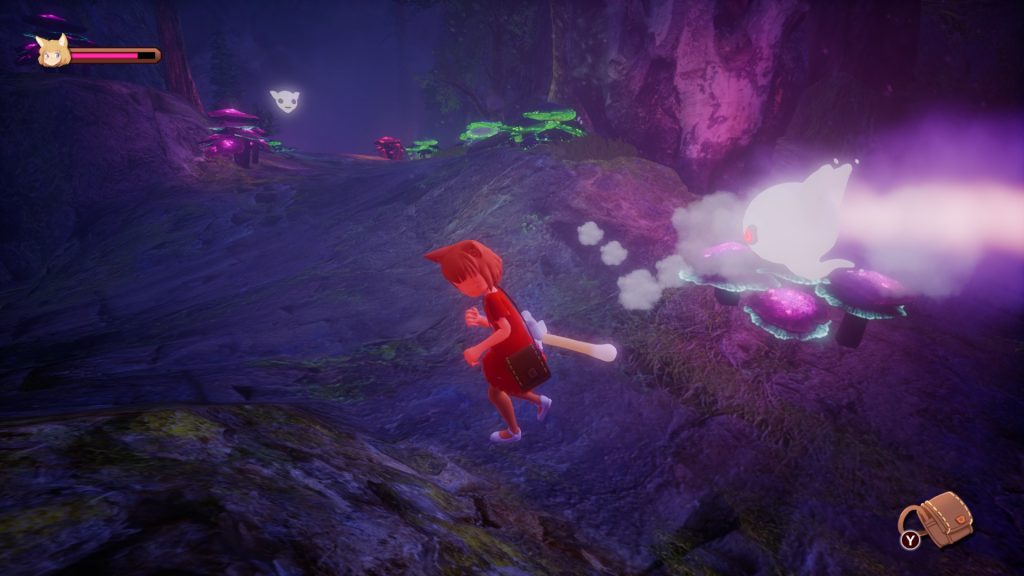 The game was developed on Unreal Engine 4 and the studio’s fledgling skills with it definitely show to a degree. Considering it first released in 2017, there’s some obvious roughness to the game. Along with the difficulties I experienced in the rhythm segments, there are parts that show the game’s limited budget as well. Most of the environmental assets appear to be default engine assets, but there were enough unique objects that fit the game’s art that it wasn’t immersion-breaking. Portions of gameplay lack proper sound effects, which is a shame because of how good the music in the game is. 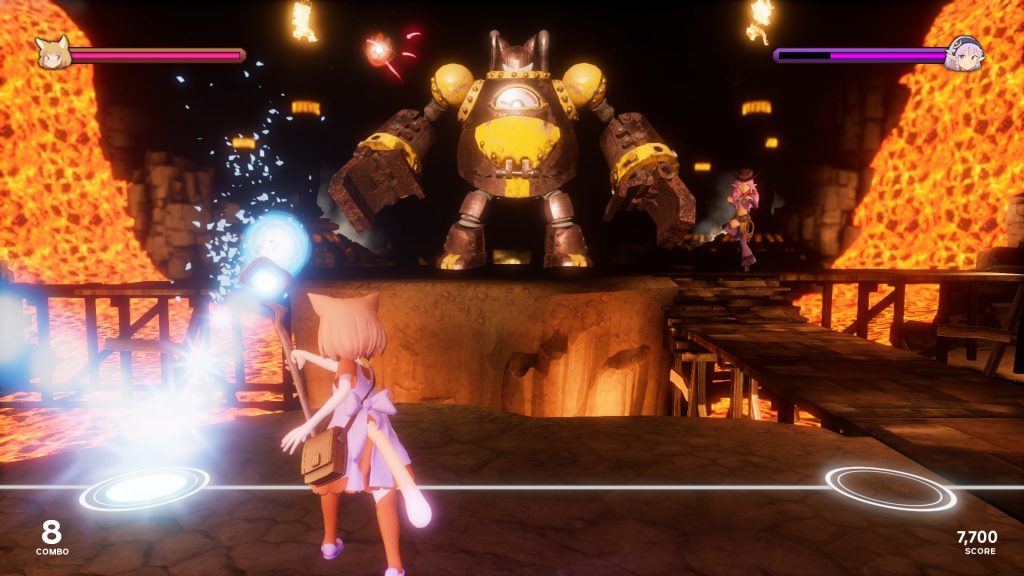 The music is one of the most outstanding assets about this game. The studio had access to an orchestrated band which helped the game out a lot. It’s not as flashy as the covers featured in Elite Beat Agents, but the soundtrack amplified my experience. Each boss battle boasts a unique song, all of which are excellent. The first boss theme is jazzy and has a funky oboe part which I adore. The last fight is this wonderful piano piece that builds up and actually feels appropriate to the stakes at hand. These escalating stakes will be familiar to anyone who has played Elite Beat Agents, where you go from helping a taxi driver keep his job to protecting the Earth from invading aliens. 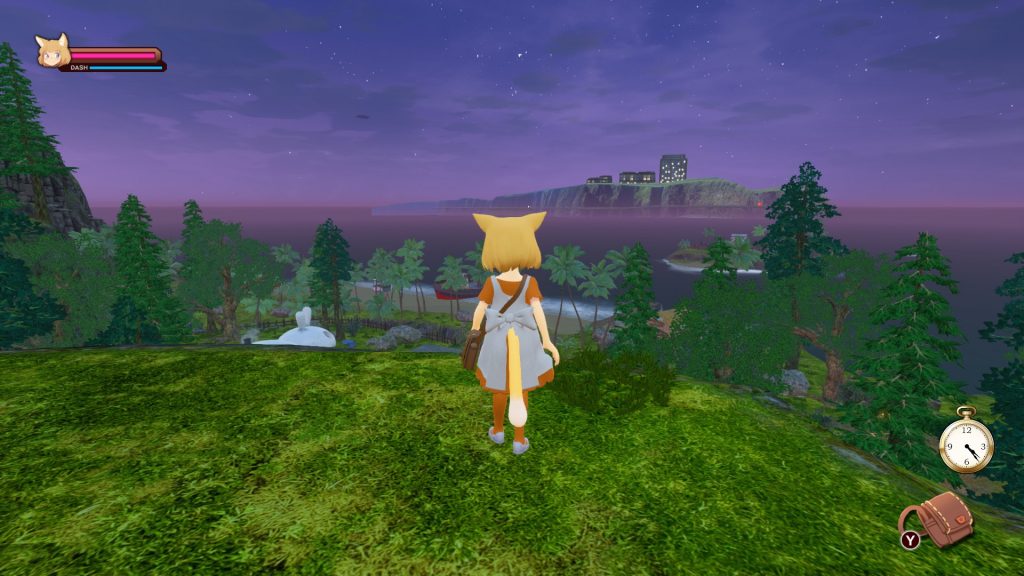 The city in the distance as night begets to dawn. The music gives way to the cheerful spring of a new day.

In spite of the problems I had with this game, I actually had a lot of fun with it. This isn’t a terribly long game either, so I recommend this title for people who would like a more relaxing experience. It was a nice change of pace to a lot of the action-packed games I’m more akin to and I won’t say “no” to any game with rhythm gameplay. I think Saito and atelier mimina have good potential. Giraffe and Annika is a bit rough, but it lays the groundwork for a great follow-up. 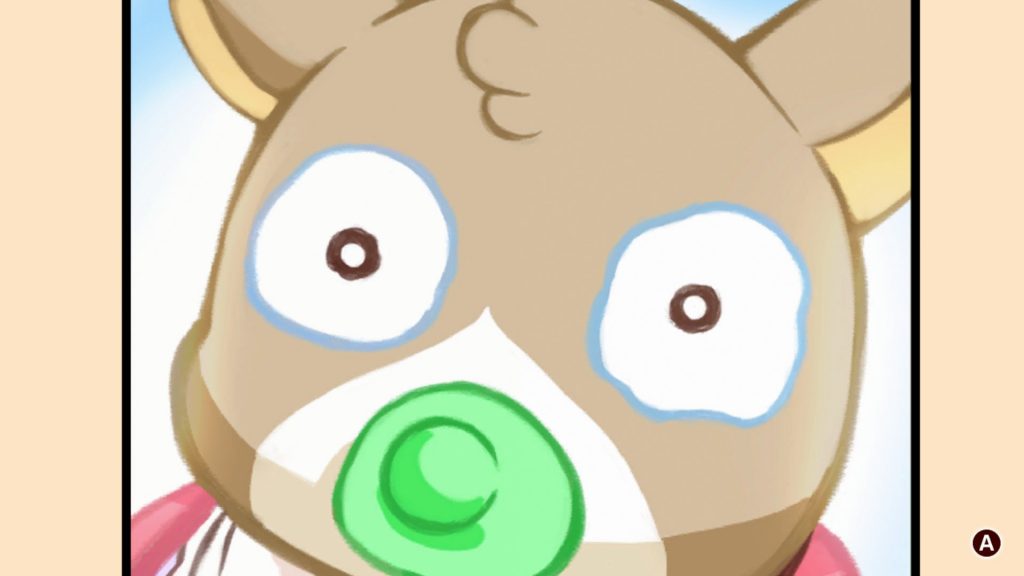 Please consider Giraffe and Annika for your enjoyment.

Giraffe and Annika is available in English on Steam.

Giraffe and Annika is a charming indie title with catchy tunes and cute characters that shows atelier mimina's potential for future titles.