Greetings, Geeks! GUG Plays is a series where our staff discusses some highlights of some of our favorite hand-chosen games. If there is a modern game that you would like to read what we have to say about it, let us know at contact@geeksundergrace.com!

A quick word before we dive into our thoughts on the Borderlands series: the editorial team is aware of the lawsuits and scandal surrounding Randy Pitchford, CEO of Gearbox Software (the developer of the Borderlands games). We debated about whether or not to write at all about the Borderlands series because of this. Ultimately we felt that, despite Pitchford’s reprehensible actions, it would not be fair to withhold coverage of a game series put together not by one man, but by hundreds of people at Gearbox. 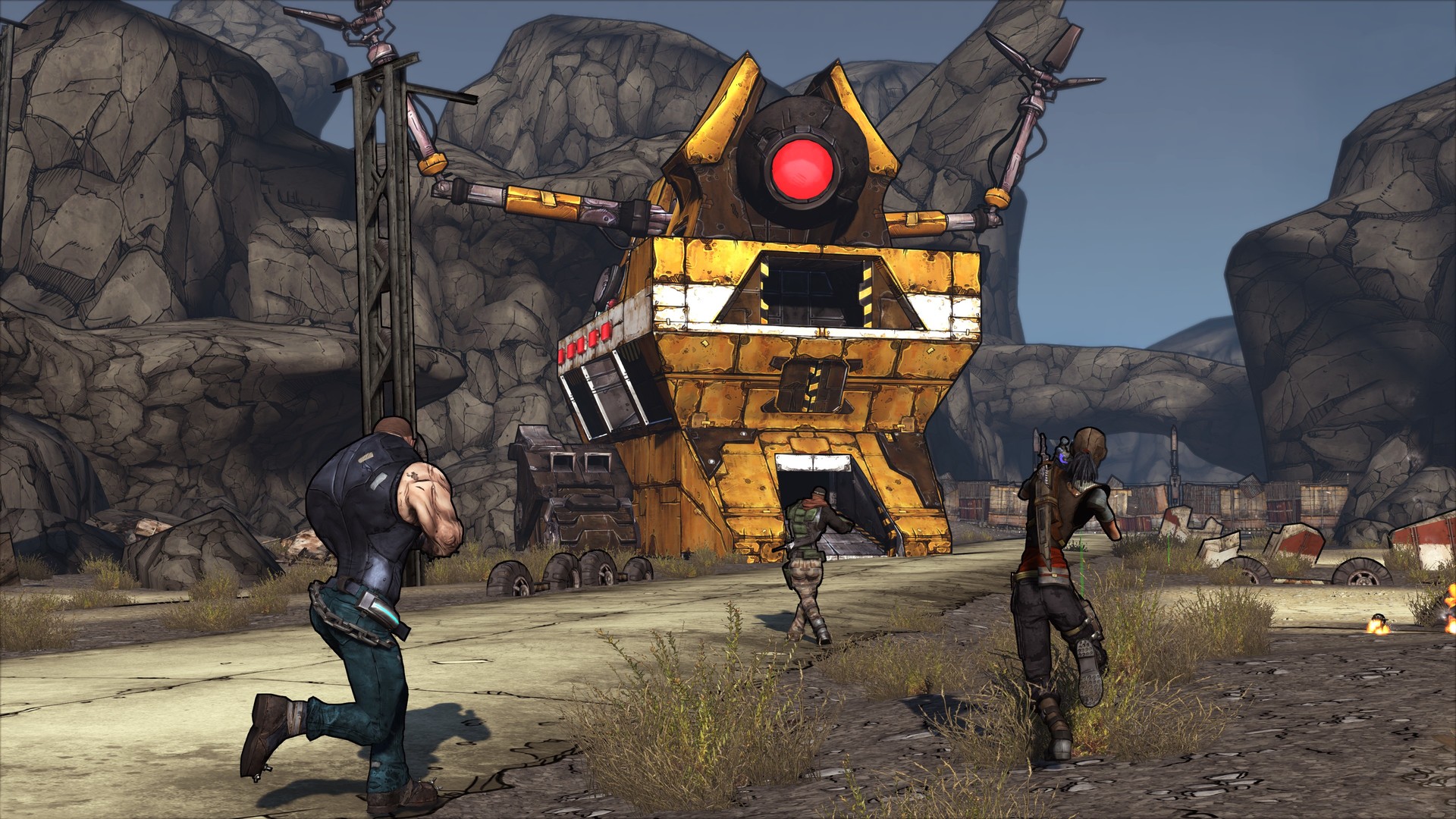 Borderlands Game of the Year Enhanced

Playing through the first Borderlands was loads of fun, as it was one of the first games I owned on the Playstation 3 (it took me a while to get one). I remember thinking, “what in the world is this game?” as I exited the bus at the beginning and was thrust into an unforgiving wasteland. I tend to go for tank-like characters, so my choice was always either Roland or Brick. After a while, I realized the main idea of what these games have been made out to be: mindless, loot-heavy, shoot-everything, free-for-all craziness. I was a fan.

What I enjoyed most of Borderlands 2 was playing cooperatively with friends. I remember being the guy who was almost always running behind, due to getting stuck on some tougher enemies and having less-than-optimal weapons. Of course, friends would leave some good loot for me after they reached it first, but I truly excelled flying solo. Needless to say, it took me ages to defeat the final boss.

Borderlands has always had some great writing. While others found him annoying, I found Claptrap to be hilarious. One of my favorite lines that he emotes is “sorry about the mess. Everything Jack kills, he dumps here — bandits, Vault Hunters, Claptrap units… If I sound pleased about this, it’s only because my programmers made this my default tone of voice! I’m actually quite depressed!”

Along with great characters are great moments, such as storming Captain Flynt’s ship during the Best Minion Ever mission in Borderlands 2. Having a Claptrap along for the ride was entertaining while also commandeering the ship by force and facing an angry, ugly captain. Defeating Captain Flynt brings up a congratulatory prompt on the screen: “By killing Captain Flynt, you have increased the average literacy of the entire area by a factor of ten.” Again, I love the overall mood of these games. At the same time, this mission reminded me of how tough and grueling it can be if playing alone; best to play with others! 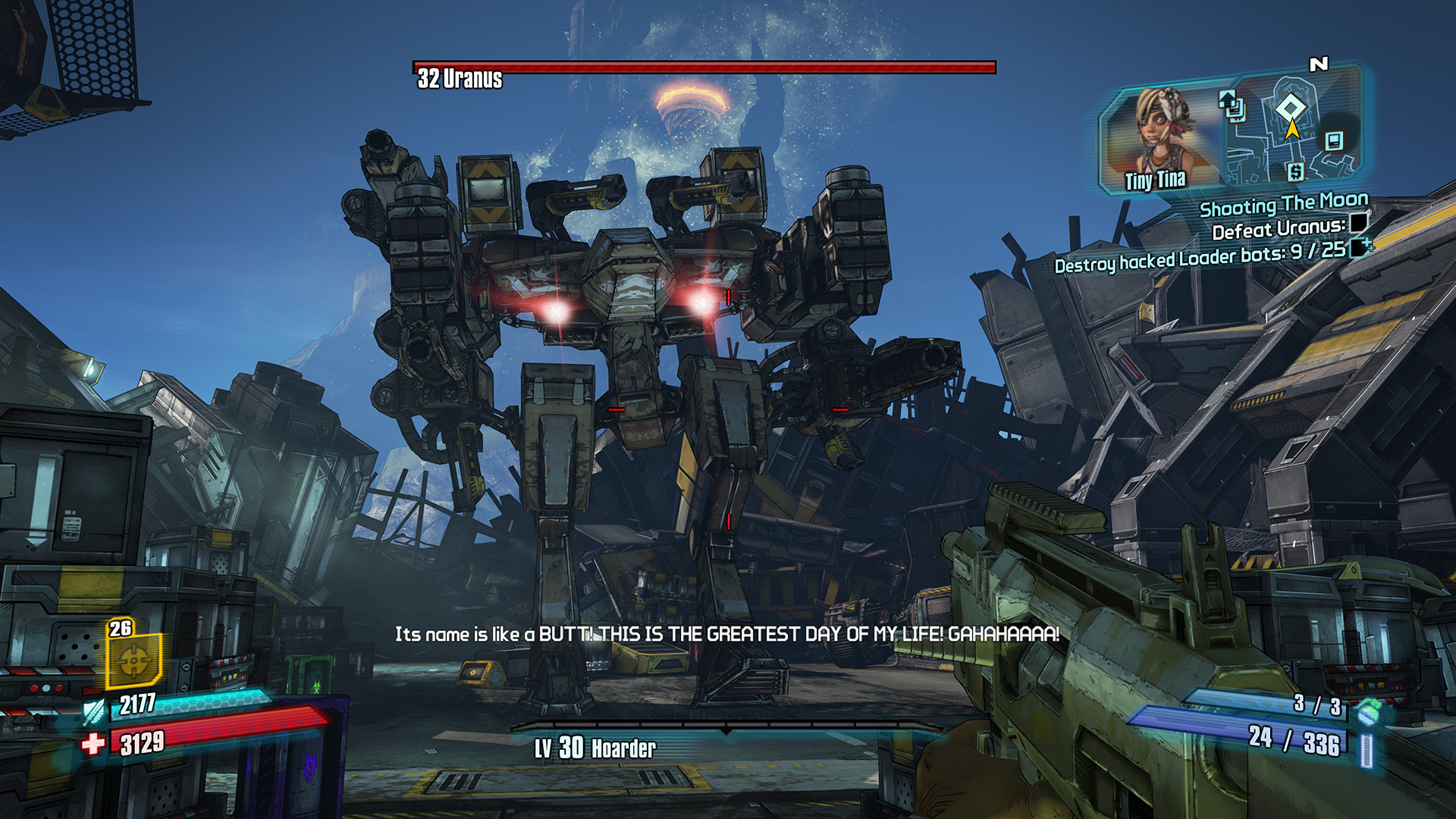 The Borderlands series has been one of my go-to video game franchises over the last decade. I don’t remember when I first learned about Borderlands, but I do remember that I started with Borderlands 2, playing it on the family laptop that was the only computer in our home at the time. The gameplay, the humor, and the craziness of Borderlands had me hooked from the first moment. I ended up building my own gaming PC rig just so I could experience Borderlands 2 in full 1080p. I recently made it my mission to beat Borderlands and Borderlands 2, which took me several enjoyable hours of busting through mission after mission. While I have been playing FPS games since Wolfenstein 3D and enjoy good FPS titles in general, what I really loved about Borderlands 2 was Handsome Jack and the other characters. Every so often Jack interrupts your game by sending an audio transmission taunting you; the interaction with Jack and the other characters in Borderlands made it feel like a lived in world. I have been so excited waiting for the new chapter of the series in Borderlands 3, and I can tell by the guns and characters that I am going to playing it for a couple years to come.

Spoilers ahead for a 7 year old game.

Borderlands 2 is a great game that encourages cooperative play, but also lets you go it alone thanks to the way it scales enemies based on the size of your party. Of all the plethora of expansion packs and DLCs, Tiny Tina’s Assault on Dragon Keep is by far the best. While the playable vault hunters from Borderlands 2 interrogate a Hyperion operative downstairs, three of the main characters from Borderlands 1 pull up chairs to play “Bunkers and Badasses” with Tiny Tina as their Bunker Master. Brick, Mordecai, and Lilith represent the three basic archetypes of Tabletop RPG players: Brick is the enthusiastic newb who just wants to punch things, Mordecai is barely paying attention, and Lilith is the super-invested veteran who carefully explains things “in character” and tries to help keep the game moving, in spite of her compatriots.

By putting everything in a fantasy setting, the developers of Tiny Tina’s Assault on Dragon Keep were able to do basically whatever they wanted with their NPCs and characters, from putting the plus-sized Ellie in a Princess Leia bikini to letting players interact with an actual Unicorn named after Handsome Jack’s horse. It also has many nods to its Dungeons & Dragons influences, from the monsters and location names down to the chests that roll 20-sided dice before passing out loot. As expected from a Borderlands release, the dialogue is top-notch and includes several meta moments. 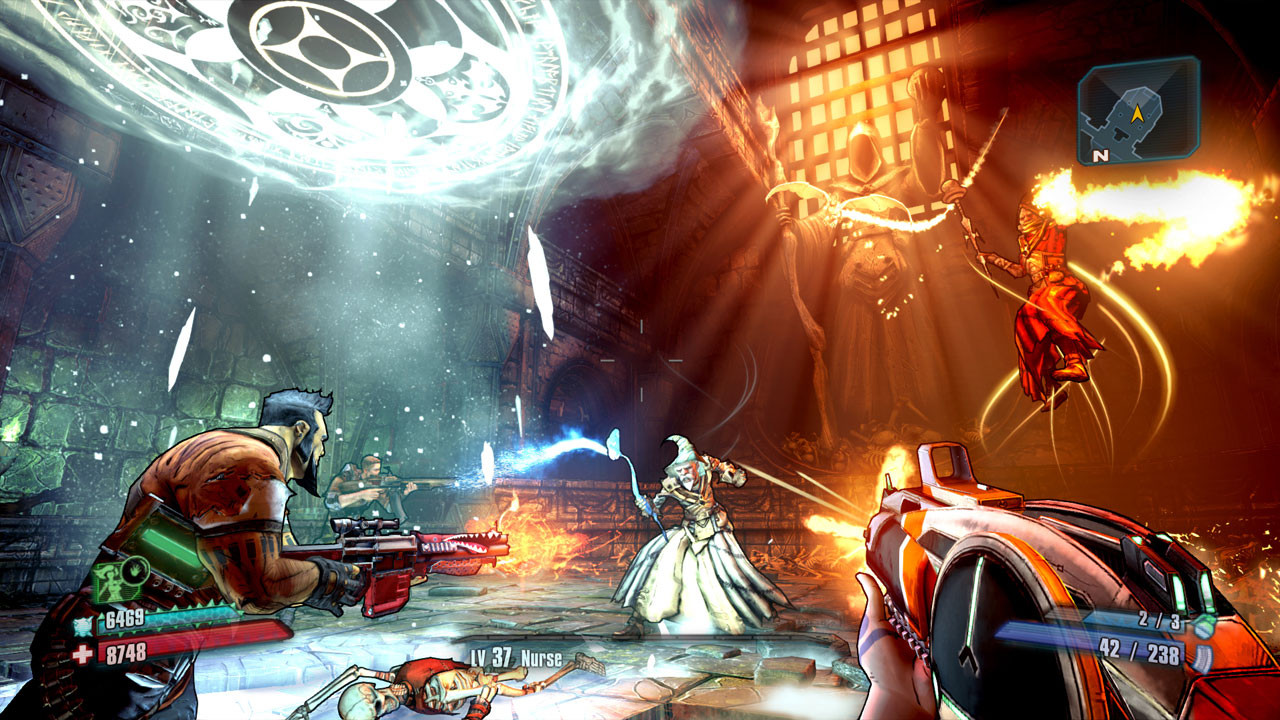 If that was all this DLC had to offer, it would be a fun but forgettable experience. But what the B&B game really hides is the pain Tina feels over the death of Roland, the soldier playable character from Borderlands 1. Roland became an NPC in Borderlands 2 (and surrogate father character to Tina), but then is killed by Handsome Jack right before Act 3 of the main storyline. During the entire B&B game Tina ignores her friend’s prodding and explanations that “Roland isn’t coming” until right before the end, when the dam breaks down and so does she. People process grief in many different ways, and the path of denial and acceptance that Tina goes through is one of the most genuine I’ve ever seen in a digital format. By the end of Assault on Dragon Keep, she’s managed to come to grips with her grief, accept her friends’ help, and even get the aloof Mordecai to take interest in continuing their B&B campaign.

The Borderlands series offers great shooting and co-op, in a well-written and cel-shaded package. But beyond that, Tiny Tina’s expansion shines a light on what it means to lose someone, and how difficult that can be to process. And unlike most somber funerals, it has guns. A lot of guns. 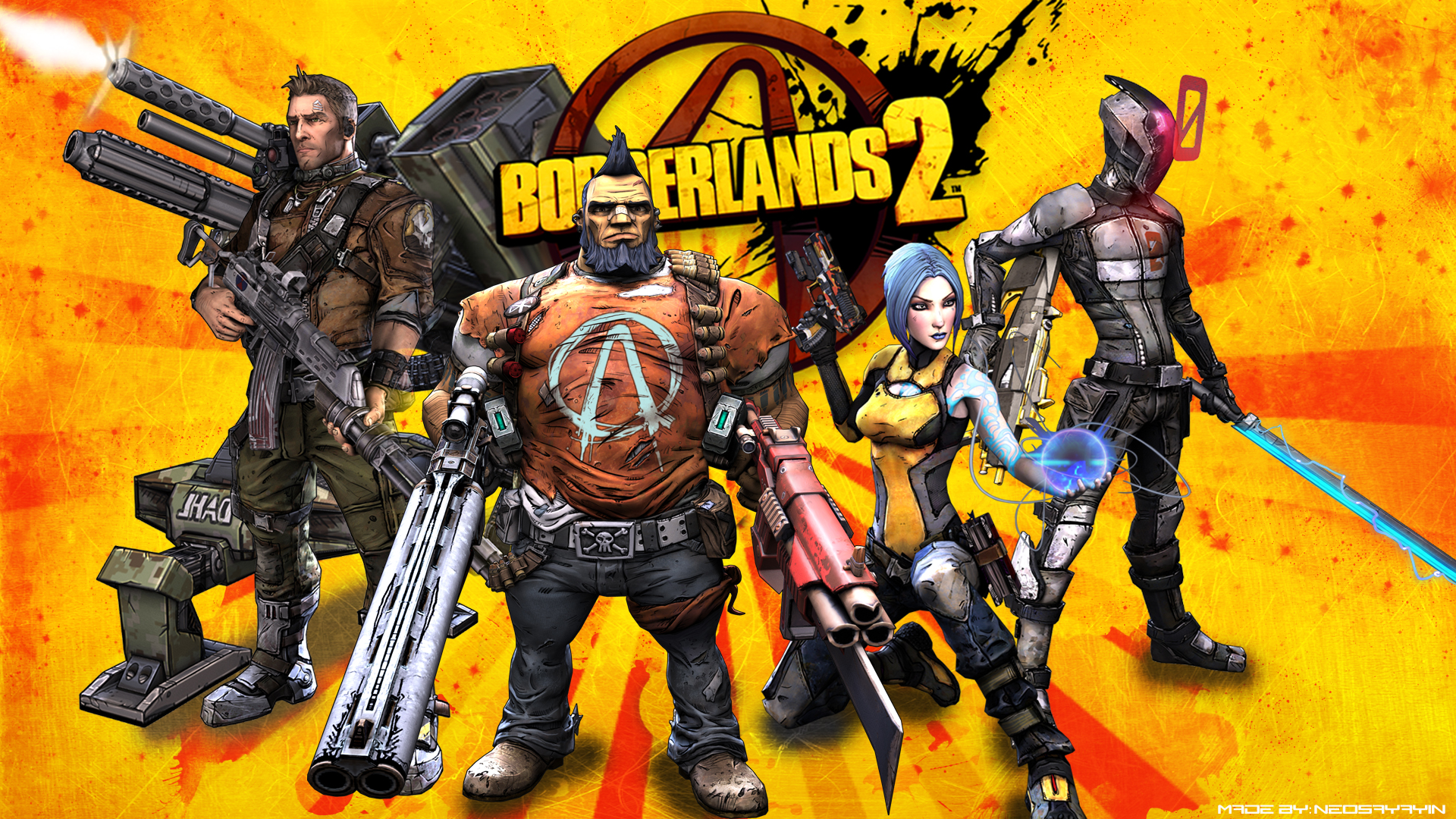 My first experience with Borderlands happened around the birth of my daughter in 2009. I was also working overnights. Therefore, sheer exhaustion joined me while I explored Pandora. The thing I enjoy the most about Borderlands is the insane cast of characters and enemies.  Loot also drew me in, especially the Legendary weapons. My favorite weapons are the Nidhogg Rocket launcher, especially when the rocket’s first explosion splinters into six more explosions. The Apex Hammer shotgun is also a keeper. When it comes to RPGs I’m generally a tank class character, so in Borderlands I main Brick, Salvador Wilhelm, and now FL4K. Nine-Toes is one of my favorite fights mainly due to the boss description and boss monologue during the fight.  Hanz and Franz are again ridiculous and crazy.

The things I look forward to the most in Borderlands 3 are the nonsensical stories, insane characters, locations, and bosses.  Borderlands is great because it doesn’t take itself too seriously. It has no reverence for anything, which is a funny breath of fresh air, when it often feels like almost anything can offend anyone these days. 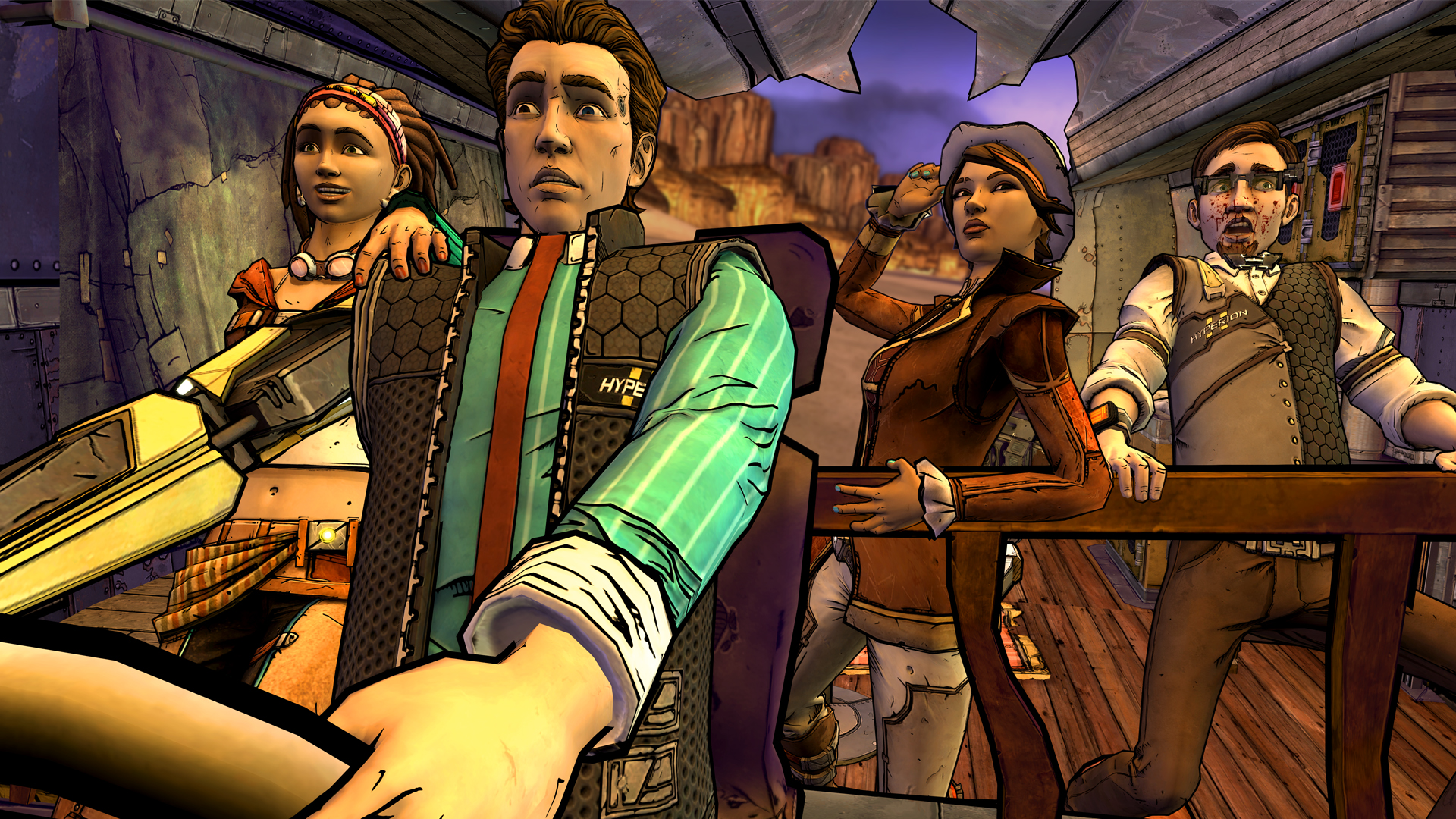 Tales from the Borderlands

My original goal for contributing to the Borderlands edition of GUG Plays was to finish Tales from the Borderlands—that didn’t happen. Instead, I found myself returning to Borderlands 2 via the Handsome Jack Collection. I decided to try and mainline the main story missions since my friends and I previously focused on some of the DLC content we had not seen yet. I put it down for a few weeks, then due to the hype for Borderlands 3, my brother started playing again as well.

When he started, I realized we were in a slight predicament—we both picked Zero. We decided to run with it and I re-specced my character to a different subclass. Despite picking the same character, it made for a good time as he took up sniping and I moved around the enemies with an SMG or assault rifle. We ended up finishing the game as my brother abruptly (and hilariously) put the final bullet into Jack’s head after we finished the boss. Not only was it a great feeling to cross this game off of my backlog, but it has been a few years since my brother and I finished a game together.

Unfortunately, I missed out on the free Commander Lilith DLC, so I’ll have to jump into Borderlands 3 without it since buying DLC will count against me in Backlog Golf. However, I still have Tales from the Borderlands to bridge that gap since those characters will be coming back, so I plan on returning to that at some point. Though my original goal was not met, the time I spent with the Borderlands franchise in the past few weeks was not wasted. 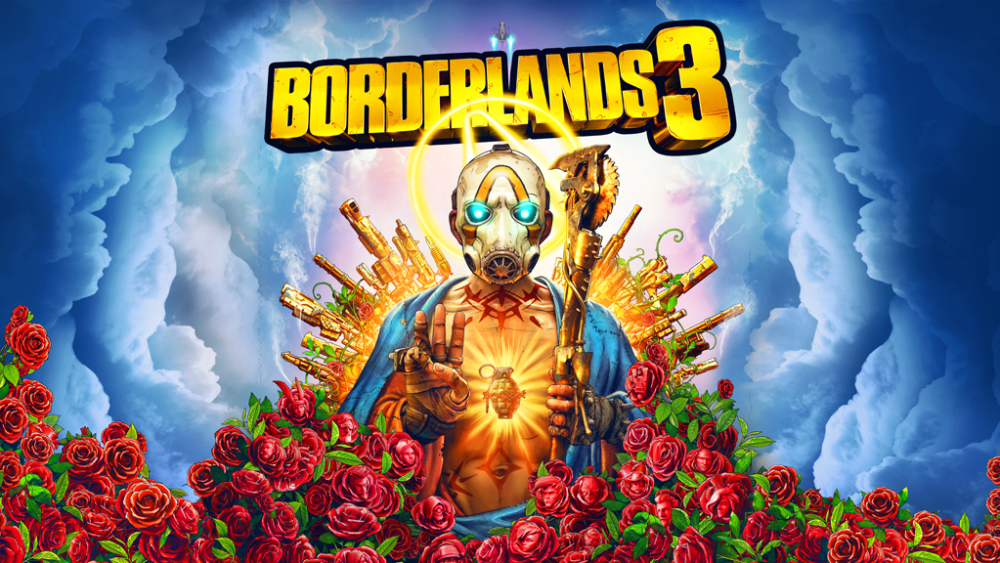