When it was suggested we all play Chrono Trigger for GUG Plays, I almost didn’t feel the need to because I remember it like it was yesterday. In the summer of 1995, my family was in between the process of moving houses and I stayed with my grandma, who bought me whatever Super Nintendo game I asked for. And luckily, I asked for Chrono Trigger.

Chrono Trigger is so memorable because it was pure style. The graphics are gorgeous and still look good almost 25 years later. Enemies on the map instead of random encounters? Combo attacks? Those awesome dances when characters joined your party? And everything about Zeal, Magus, and that whole backstory with Frog is grand on a scale that I hadn’t seen before. I consider silent protagonists and multiple endings to be irksome ways to ruin the drama of JRPGs, but back then, multiple endings were a brand new revelation and a great way to kill a summer when my favorite genre only got new games every year instead of every week. Furthermore, Chrono Trigger’s mythology is incredible, and the supporting cast made up for Crono’s inability to communicate.

I find out one new thing about the game by picking it up again this month, though and that’s this: mobile gaming is still terrible. 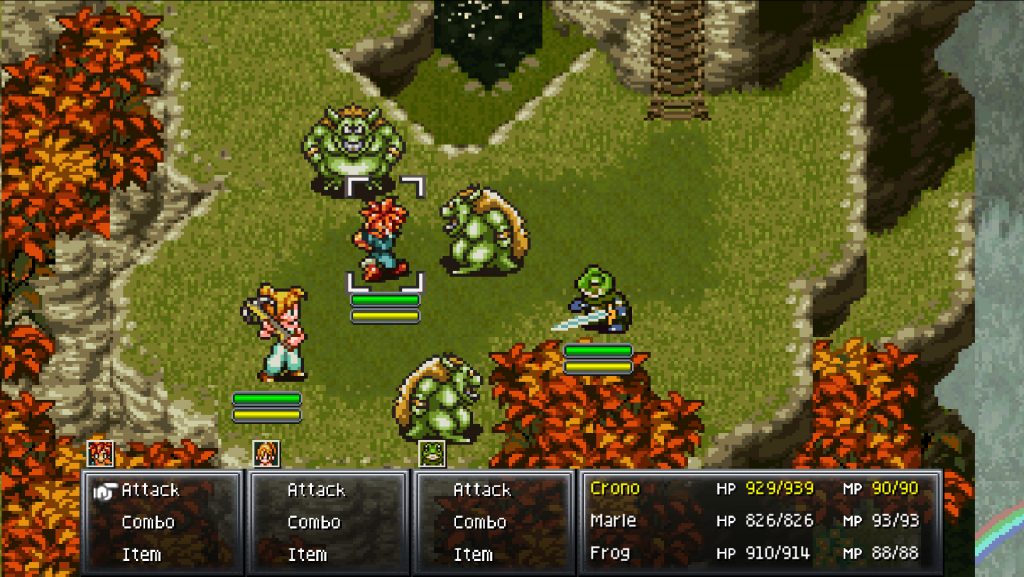 Chrono Trigger is considered a classic by the gaming community, and rightly so. Much of the game holds up to this day; the music is great, the art style makes the most of the graphical limitations of the era, and the game makes clever use of time travel not only in its intricate story, but also in some of its gameplay mechanics, such as the ability to plant a tree in the past and use its wood when it has grown in the future. But as I have been playing this game, one element of its design feels dated: the Active Time Battle system (or ATB for short). Here’s how it works: each character in your party has a gauge that fills up over time. When it’s full, that character can take an action, such as performing an attack, casting a spell, or using an item. Afterwards, the gauge is emptied and starts to fill up again. Your enemies also have these gauges—albeit ones that you cannot see—and perform their own attacks whenever they fill up.

My issue with this system lies in the fact that time doesn’t stop for you to make decisions, even though you are sifting through menus the entire time. Every moment you spend pondering a move after your character’s ATB meter fills up is wasted time. Your opponent is a computer capable of reacting the instant it is given the opportunity; you, on the other hand, do not have the luxury of being able to react that quickly. The “Wait” option in the game’s settings helps to alleviate this issue, but only partially; with this option selected, time will stop while you are looking through a submenu, such as your list of items or special attacks, but if you back out of the current submenu—which is necessary if you want to access a different one or select a different character to take an action—time starts up again.

Perhaps I’m being too picky here. After all, I have no problem with the pressure of real-time decision-making in other types of games, such as Real-Time Strategy (RTS) games or twitchy shooters. There’s just something about having to decide things quickly while sifting through menus that rubs me the wrong way. Part of my distaste might be because I never grew up with games like this as a kid; I skipped over Chrono Trigger and the other classic SquareSoft JRPGs from the ‘90s that utilized the ATB system; instead, I played strictly turn-based titles like Pokémon and Skies of Arcadia. At any rate, I’m glad that most games today have moved away from this style of combat. 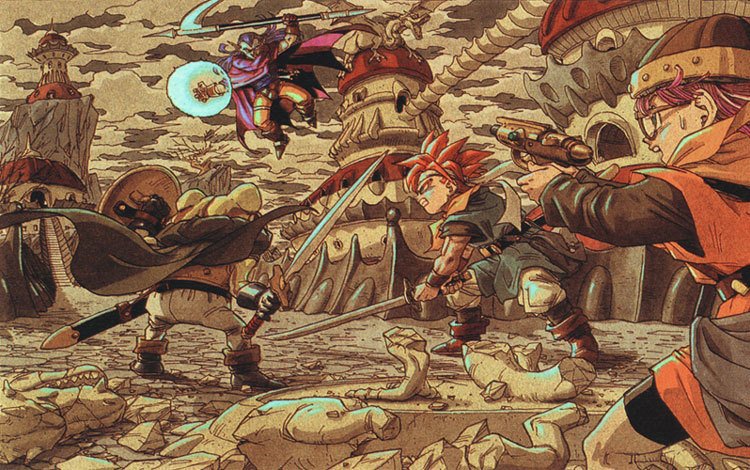 I honestly had never played Chrono Trigger until a few years ago on the DS and recently returned to it on PC. I didn’t own a SNES until much later in the console cycle and grew up as a Sega kid. Over the years, I learned about Chrono Trigger and the impact it has made on people through the internet. In a strange round-about way, the legacy of the game exists in a way that it still had an effect on my childhood.

There was a trilogy of Dragon Ball Z games called Legacy of Goku on the GBA. Of course, the anime was also created by Akira Toriyama, but the game also carried the same visual presentation as Chrono Trigger. Though the combat is action-based, some of the wilderness areas looked as if they were ripped right out of the legendary turn-based RPG. I hadn’t noticed that until I first experienced the time-bending adventures of Chrono and the rest of the crew.

Toriyama’s work had an impact on many of us before we even knew what Dragon Ball Z was, and the addition of the animated cutscenes in newer versions of Chrono Trigger bridges that gap in a creative way. Square Enix fumbled when they released the game on Steam as a copy/paste of the mobile port, but with a series of updates, it’s become a worthwhile experience. Though I haven’t played it nearly as much as the rest of our staff, it was good to look back on a piece of gaming history that influenced some of my favorite GBA games of all time.