Greetings, Geeks! This is the third of a (hopefully) monthly series where our staff discusses some highlights of some of our favorite hand-chosen games. If there is a modern game that you would like to read what we have to say about it, let us know at contact@geeksundergrace.com! 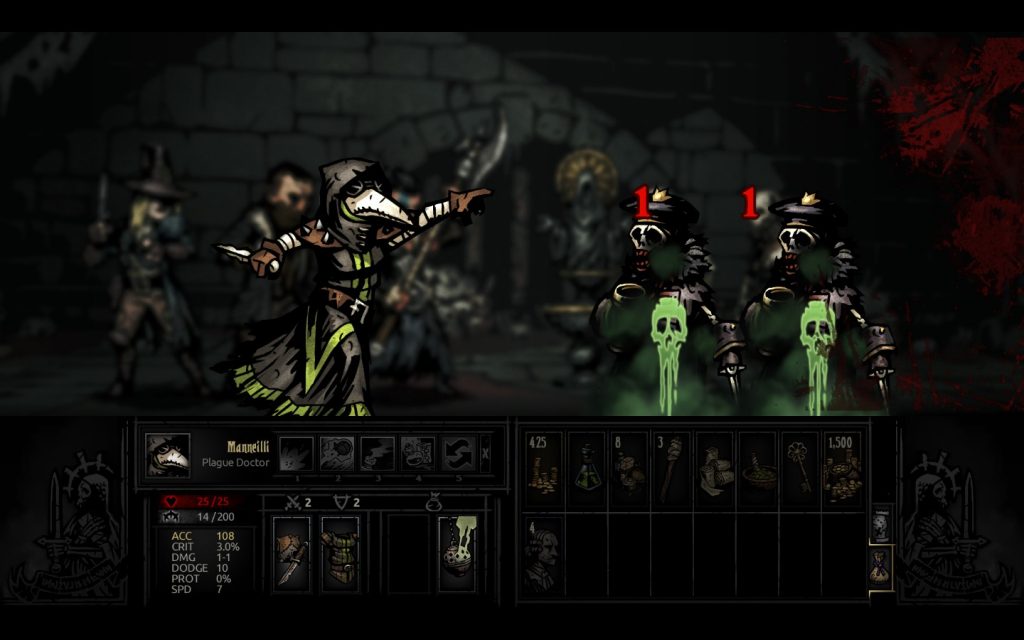 Darkest Dungeon seems like an intimidating game when you first look at it or start playing. I grew to enjoy it once I understood how it worked, but yes, it is still tough. I wanted my party members to survive for a very long time, but accepted that one bad run is all it would take for any of them or even all of them to perish. What I enjoy the most about Darkest Dungeon is the stories that are told through the individuals in my party.

One of my favorite examples is a Plague Doctor that had lived to see the end of a few dungeons runs, but didn’t make it out one day. Before that, I left them gambling in the tavern in which they gained the negative “Gambler” quirk. Another time I thought the Abbey would be a better spot for them, then they came away with the “God Fearing” quirk, which surpisingly, also turned out to be negative (can only pray at the Abbey to relieve stress). The story of this Plague Doctor who became addicted to gambling and one day came to fear God after an experience in the abbey was a story unique to that character while others in my party walked much different paths. 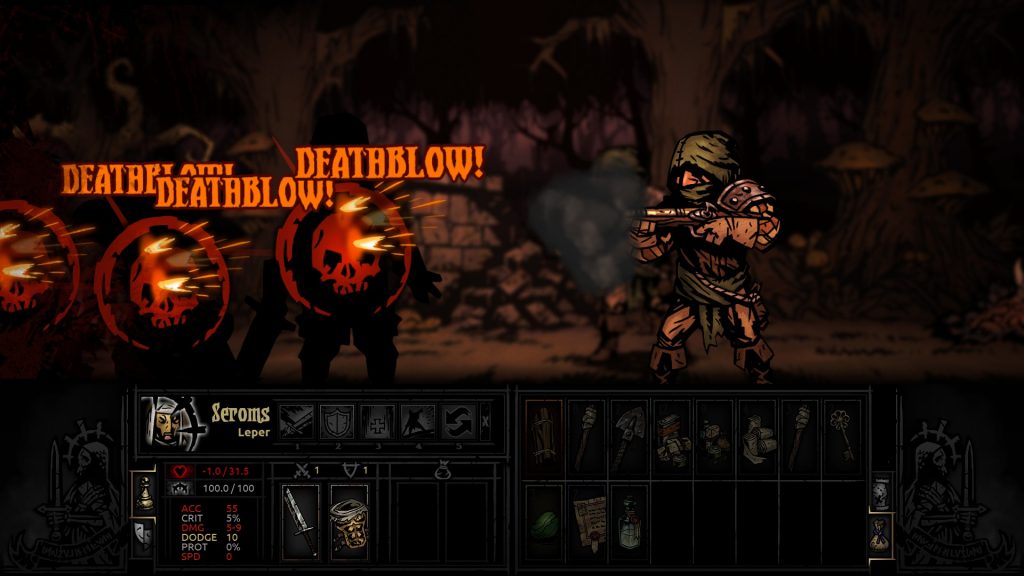 Some people think this is fun. Not me.

I can understand why Darkest Dungeon remains popular even though it has been around since its Early Access release at the beginning of 2015. To this day, the game benefits from a very active Discord where veterans share excursion stories, help noobs like myself, and mods to keep things interesting for veterans. Of the few Discord channels I have participated in, Darkest Dungeon‘s is the best so far—populous and vivacious. The moderators are surprisingly active, as I was recently reminded when I posted what some consider to be spoilers in the “hamlet” channel Indeed, four years later, hardcore fans are still protecting the game’s secrets!

Those secrets really boil down to every individual player’s descent into the Darkest Dungeon—yes, the Darkest Dungeon, the final level(s). After 84 hours of grinding two of every character class but the Hellion, Plague Doctor, Houndmaster, and Man-at-Arms to the max level of 6, I launched my final campaign into said dungeon…and found it no more difficult than any other, for my Crusader (tank), Highwayman (rogue), Bard (utility), and Vestal (heal bot) were too strong.

But then I played the second mission, and perhaps waited too long to camp. The story of what ensued happened in three screenshots. 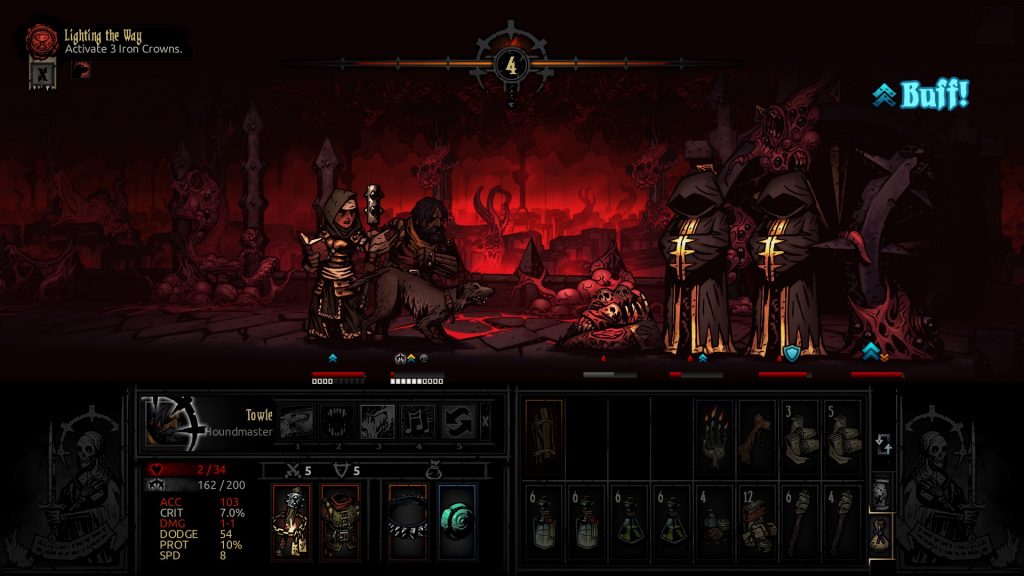 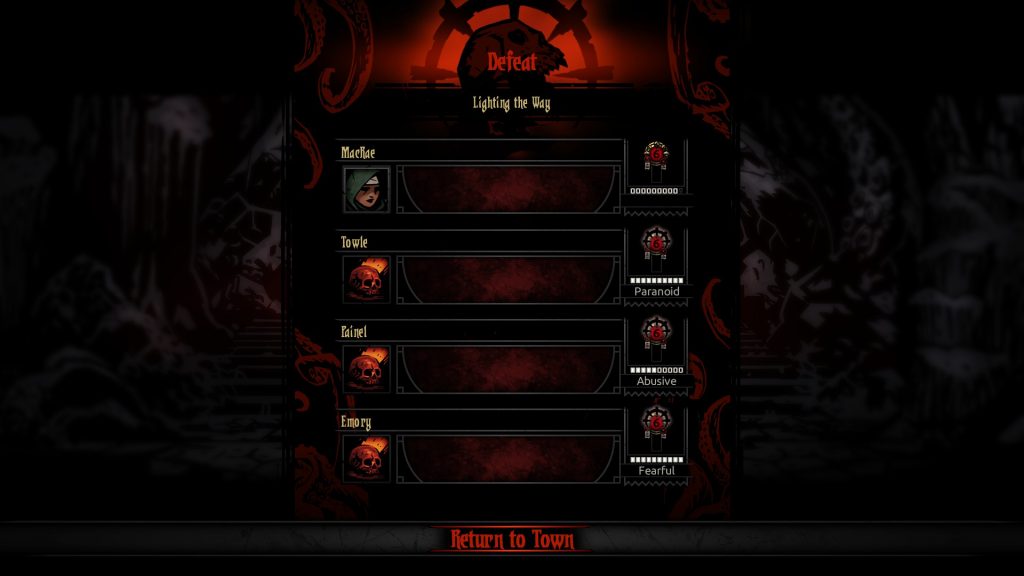 In a single fight, I was reduced from somewhat overpowered for traditional dungeon-crawlers to a frustrated and disappointed gamer. Real-time weeks of preparation erased in just a few stress-bombs and a series of seemingly impossible-to dodge-attacks.  What I mean when I said I was lacking depth in certain character classes is that in the screenshots above, three of the rarest die in the same battle, one by one. Not even my fully-upgraded town stagecoach could supplement this. Even if I did find the level-four character classes that I lack, I am disinterested in more grinding to get them to level six. Darkest Dungeon was fun for long time, but I am disinterested in additional grinding in preparation for potential failure. Earlier low-level losses I considered part of the game’s learning curve. End-game losses should be mitigated by the experience required to reach the late-game. But Darkest Dungeon‘s claim to fame is suffering a combo of consecutive critical blows, DOT like bleed or blight, and massive stress shocks that send a team of would-be heroes into Affliction status. I would rather rely on my skill than RNGesus. 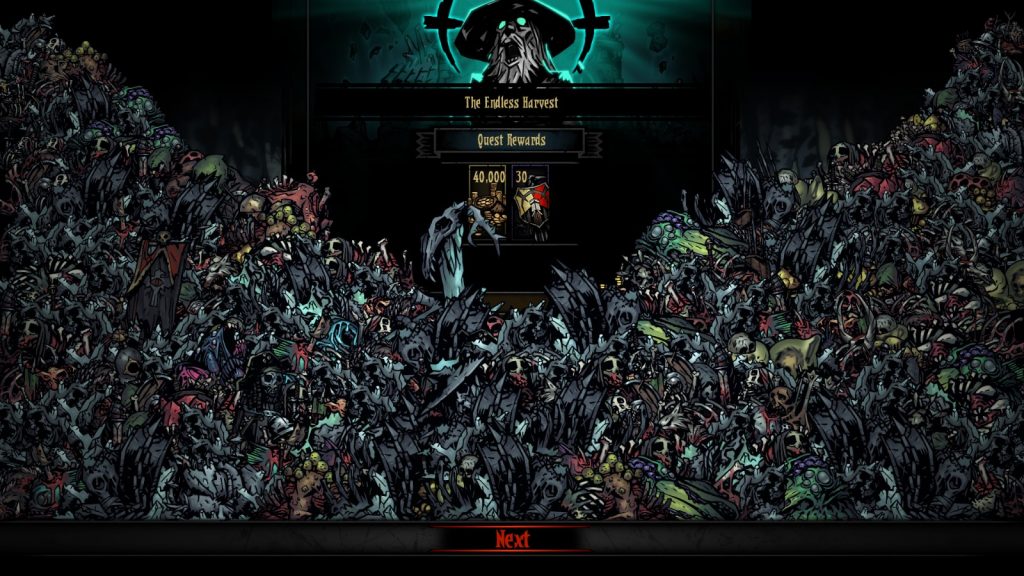 “As I crawl, bloodied and beaten, to the last challenge before me, I consider the blessed fortune I have found today. My weak-minded comrades, in their madness, gave me opportunity to victory. The untouched goods have kept me alive. I have slaughtered creatures no man has ever fathomed. I have compromised my ideals so that I may continue another day. I have spent every coin and valuable in my possession. No matter the cost, I will have my inheritance. Just one last beast to take care of…” ~ Excerpt of Last Attempt, November 13, 2018

Darkest Dungeon is possibly one of the most difficult games I have ever played. It is not just the tactical mind or the management skills you must acquire to advance. Treating your members as fodder to your goal is the first and most important hurdle you need to overcome in order to succeed at the game. I both appreciate and loathe the mindset of a hoard mongerer; you must adapt to find progress. Darkest Dungeon encapsulates the idea of mastering a game to the peak of obsession in its narrative and execution, and that is inspiring and frightening.