Confession: I’m not a fan of JRPGs. I don’t like random encounters and I don’t like turn-based combat. If you added up all the JRPGs I’ve played over the years, it would amount to one and a half, maybe two full games. It is undeniable that the JRPG is a very popular genre amongst gamers and the Final Fantasy series one its top stars; so on the eve of one of the biggest releases for the series, I figure I would check out what all the fuss is about, and what better way than to jump in to the very first game? Note that for this section, I played the mobile port of the game, so the graphics have been upgraded and I used touch controls.

So how did I feel about the game after spending some hours with it? Oddly nostalgic—not about the game of course, I’ve never played or seen Final Fantasy played before, but for the simpler times of my childhood. Unlike modern games, the first Final Fantasy doesn’t have a complicated story plot, expansive backstory to uncover, or unexpected twists. The world has been corrupted by darkness, and heroes have been foretold by prophecy. They will save the princess and the world by fighting the monsters that have spawned. The straightforwardness of the game is rather refreshing in the sea of complex and branching story-driven RPGs we have today.

In contrast to the simple plot, the gameplay is a lot more complex than I first expected—not because the game was designed to be difficult, but because it lacks the modern-day game mechanics that I’ve grown accustomed to. For example, you don’t automatically get your health and MP refilled when you level up, there’s no overworld map, and there are no quest markers. You have to think about many more things when you are playing like “The next area is to the west, but how far?”; “Can I go over land or do I have to use the ship?”; “Where did I put my ship?”; “Do I have enough potions?”; “OH NO! They don’t sell potions in this town!” 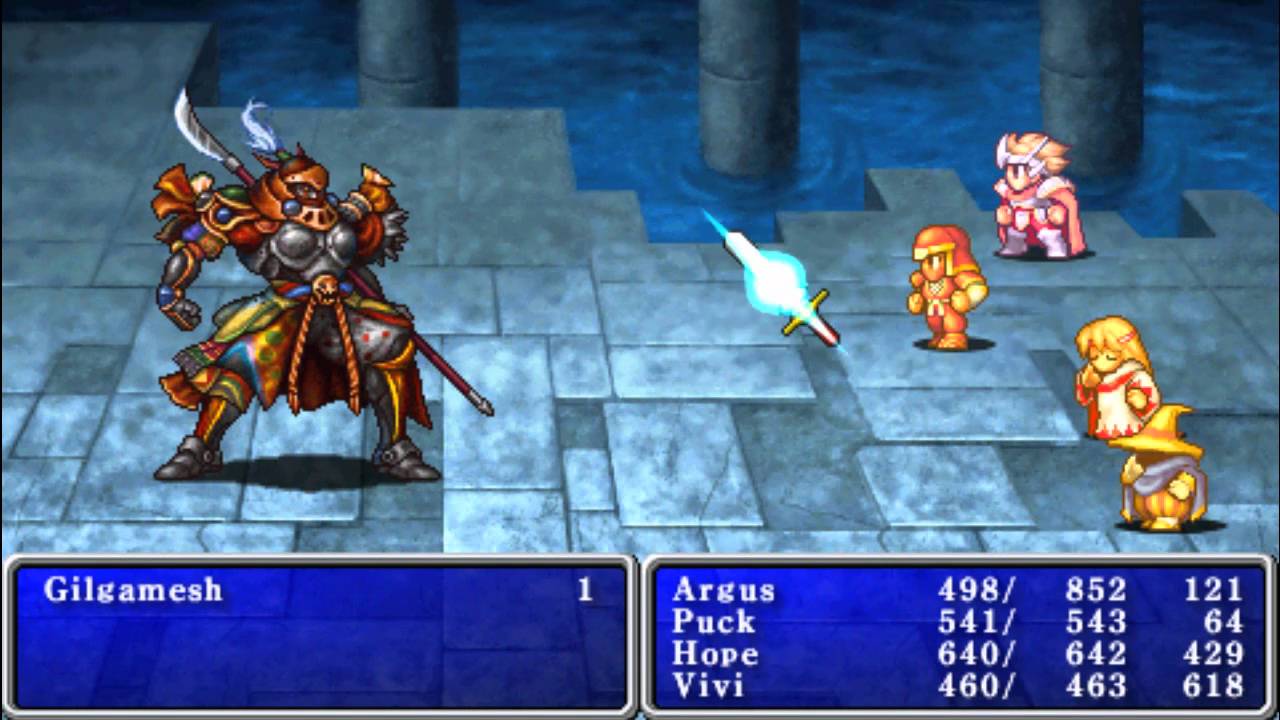 While the lack of these may frustrate many people, I actually embraced the challenge. I had to think about where to go, pay attention to the lay of the land, and try to memorize the map. Each foray outside of town is exhilarating because I don’t know what kind of monsters I might encounter and they may be much stronger than my party. The sense of exploration and risk is strong because I don’t know where the next “safe stop” is, so I have to over-prepare and plan an escape in case things go badly. Contemplating when to save the game becomes important too. I can mess myself up by saving in a bad spot with no backups. I found myself juggling two save slots just so that I don’t get stuck in an impossible situation. In a way, the game almost needs to have these mechanics or risk being uninteresting.

After all this what do I think? Am I a JRPG fan now? Probably not. I’m not even entirely sure I’ll finish this one. But it certainly has given me a new appreciation on game design. It’s an art to balance story, mechanics, and tech to create an engaging world that players want to be in. Small changes, while benefiting one aspect of the game may in fact take away from something else. Certainly, with all the massive and expansive worlds this franchise has built over the years, it will continue to delight new and veteran players alike for many years to come. Whether or not I’ll join in that group remains to be seen.