Greetings, Geeks! GUG Plays! is a monthly series where our staff discusses some highlights of some of our favorite hand-chosen games. If there is a modern game that you would like to read what we have to say about it, let us know at contact@geeksundergrace.com! 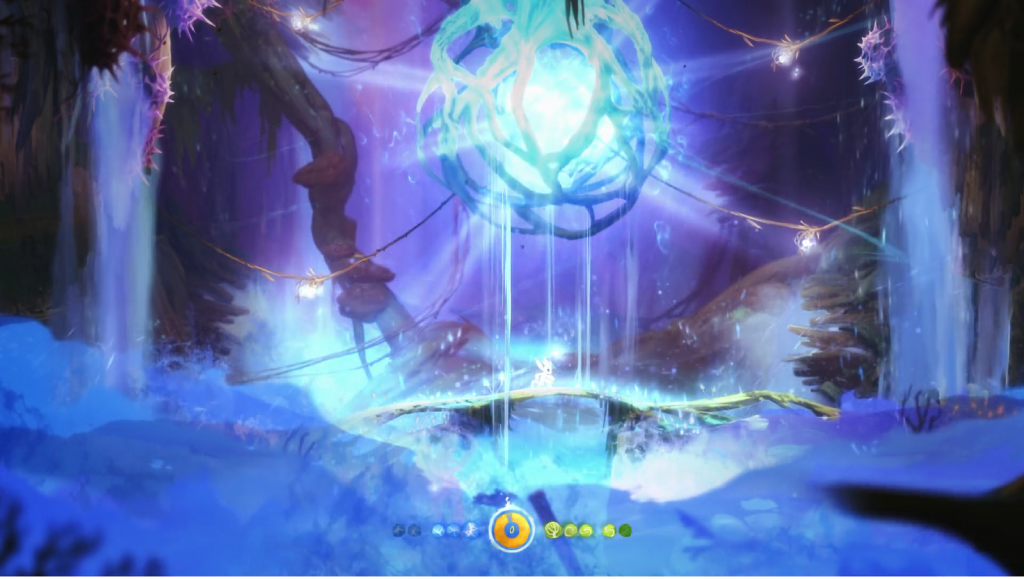 After a strenuous climb through the passageways within the mighty Ginso Tree, I finally find it: the tree’s heart, the Element of Waters, encased within a mass of corrupted thorns. Eradicating this spiky prison will unleash the tree’s life-giving water, and is the first major step in restoring the Forest of Nibel, my decaying home. The heart is suspended above me, so I’ll have to wind my way through nearby paths to access the roots of the corruption.

Once I reach the blight, my floating companion Sein hacks away at the thorns, weakening their grip on the Element bit by bit. When the last thorns are destroyed, Sein gives the Element a jolt of energy, bringing it back to full strength. The tree’s heart pulses with life, and I notice water pouring from several points inside the tree. I also hear a rumbling beneath my feet. Peering down through the cracks in the room’s vine floor, I see water surging quickly upward, covering everything in its path and threatening to engulf me in seconds. If I don’t act quickly, this tree will become my tomb.

I desperately scamper up the tree’s inner walls, bounding from platform to platform as fast as I can. Hostile creatures within the tree, oblivious to the danger rising to meet them, lunge at me, but there’s no time to retaliate; I dodge their attacks and callously use them as stepping stools in my frantic escape. I don’t look back, but in my mind’s eye I can see their bodies helplessly tossed about by the torrents below, fueling my fear and spurring me onward. Despite my best efforts, however, I hear the water growing ever closer. Looking directly above me, I can see the opening at the top of the tree and the night stars twinkling in the sky. I’m so close. Suddenly a powerful force slams into my feet, propelling me upward at incredible speed…

The water blasts me through the opening, depositing me on a humongous branch. As I slowly rise to my feet, I see the water running down the side of the tree, purifying the fetid pools far below, and my fear is replaced by relief and hope. I’m exhausted, I can barely move, but I did it, and I made it out. I’m safe. 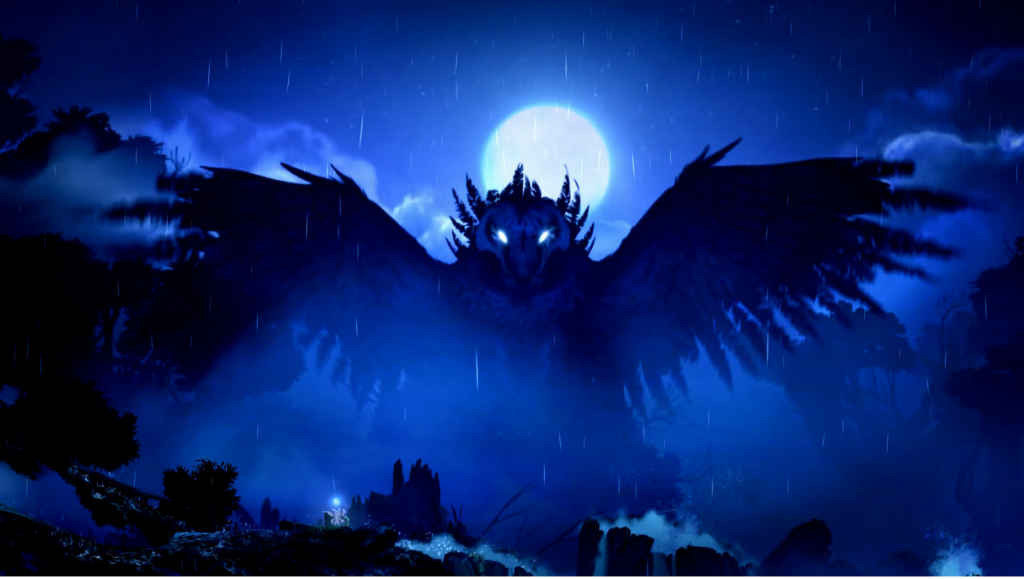 Except that I’m not. Out of the corner of my eye, I spot something rustling in the leaves, and then I realize that those aren’t leaves—they’re feathers. A massive bird spreads its wings, leaps off its perch and lands atop the tree with a crash, knocking me onto my back. It’s Kuro, the creature responsible for the forest’s decay. As she steps closer, she glares at me, her eyes burning with pure malice. I turn and flee, but she strikes me with a devastating blow…

I can feel myself falling…everything is getting blurry…

All I can think of is Naru…

This can’t be the end… 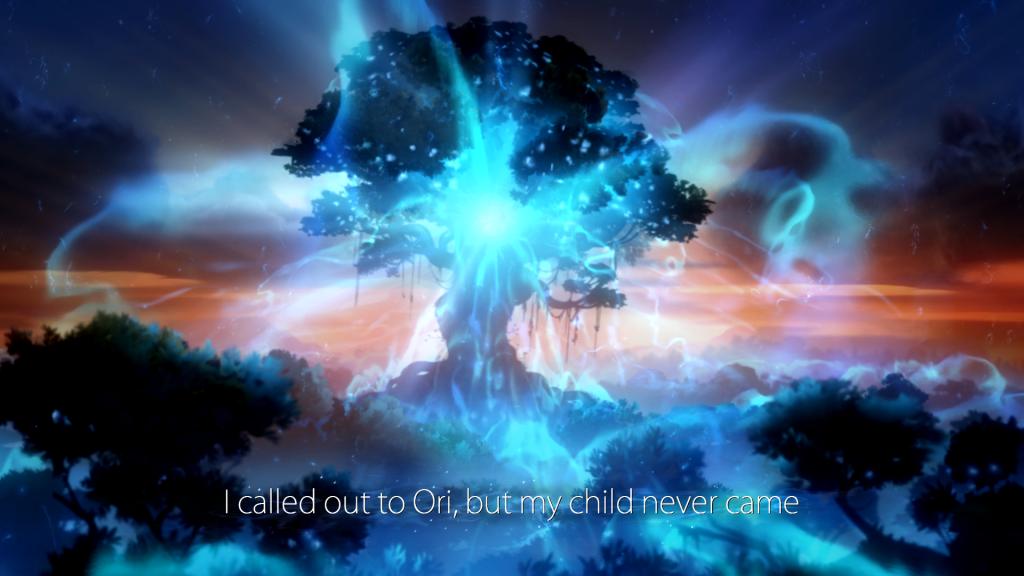 There aren’t many games as heartfelt as Ori and the Blind Forest. I count this game as one of my all-time top games that I have ever played or will ever play. The game is an emotional roller coaster. Ori and the Blind Forest begins with a huge emotional drop that had me in tears the first time that I played it. The Spirit Tree seeking Ori sets off a chain of events that leads to death and decay. Even though I knew the emotional drop was coming, my second playthrough the game it still got to me. A game that can elicit the same emotions from me over and over is a very special game.

When I begin my second playthrough of Ori and the Blind Forest, I was reminded of the parallel that I noticed during my first playthrough: the father/child story between the Spirit Tree’s search for Ori, and the way that God seeks us in order to bring us into His grace. I doubt that the game developers meant for there to be any Christian imagery in the game, but I look at it through the lens of being both a father and a child of God. As a father, my heart worries for Ori being left alone in a dangerous world. As a child of God, I see how great my father God’s love is for me that He seeks after me just like the Spirit Tree seeks Ori. 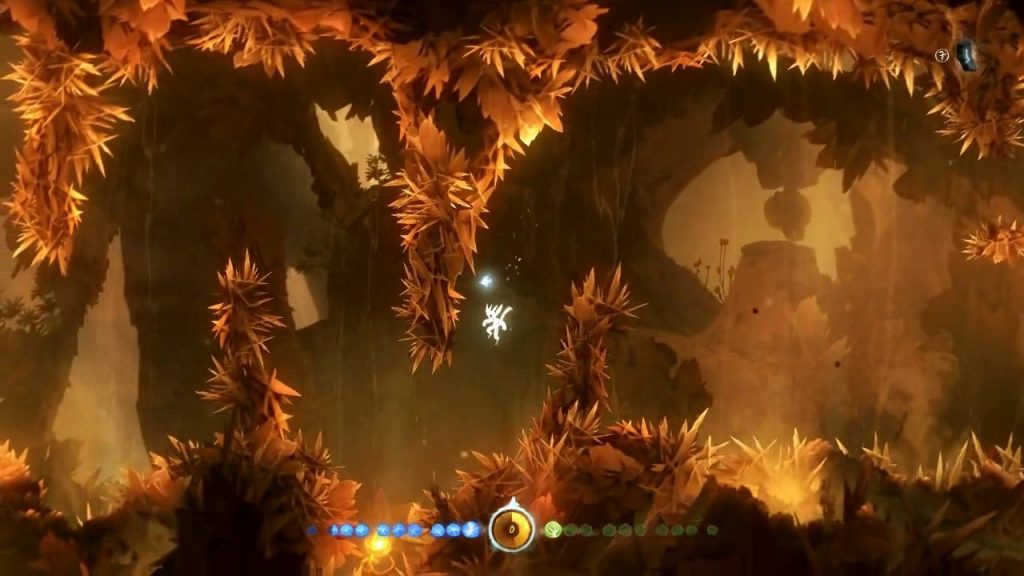 “5 Things I Noticed While Playing Ori and the Blind Forest”

Ori and the Blind Forest allows for controller input, but is designed for an Xbox controller. Not being an Xbox gamer, I was still able to cheat the system by having my PS4 controller plugged into the PC I was playing on. Take that, Microsoft! Editor’s Note: I, too, had to perform some old school .ini file hacks to get my DS4 to work. Take that, Microsoft, indeed!

Ori and the Blind Forest is currently only available on Steam as the deluxe edition. That being said, the content is pretty neat and tease a game that could’ve been possible originally.

Before playing the game, make sure to glance through the settings. You’ll find the normal volume options, but also others, such as damage indicators. Which leads to #2…

Because I hadn’t noticed the damage indicator setting, I had no idea how much spikes would hurt at first. Was it going to be like stepping on a pebble, or a Lego? Often times, it was a Lego (instant death).

1. It’s Possible To Be TOO Pretty

Ori and the Blind Forest is a gorgeous game. Its music is astounding, visuals are beautifully colorful, and details incredible. However, I cannot count how many times I have died due to being so lost in the atmosphere I ran right into #2. I think it was somewhere in the 200’s….

Beware, there be spoilers! 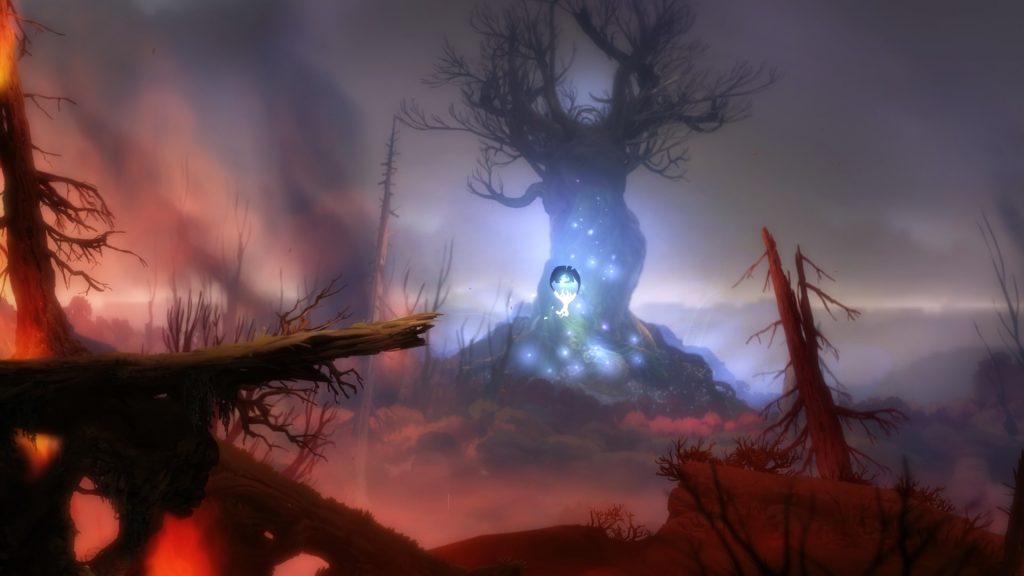 And he who was seated on the throne said, “Behold, I am making all things new.” Also he said, “Write this down, for these words are trustworthy and true.” ~ Revelation 21:5

Seasons After Fall, Fe—add Ori and the Blind Forest to the list of games that I have played in recent years depicting a forest avatar, guardian, or spirit embarking upon quest to restore something that was once beautiful, yet is fading or already dead. I do not believe it coincidental that these protectors are analogous to angels, carrying out the wishes of the deities within these games, or in the case of Ori and the Blind Forest, the will of Nature itself; as the spirit Ori carries out the will of the Spirit Tree, so too does the Holy Spirit reveal God’s will to us.

As Eric points out above, I agree that one can derive many Christian themes from Ori. I enjoyed the story of Kuro, the owl whose chicks die from the aura the Spirit Tree releases while calling Ori back to it. I think of this event as a metaphor for common skeptic questions: “Why do bad things happen (and to good people)? If God is in control, why do you, made in his image, suffer?” And so on. 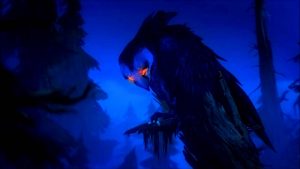 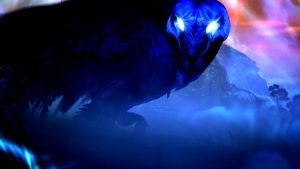 Kuro becomes “blind” with rage when her children die. Grieved, is unable to “see” the bigger picture.

Unfortunately, believers, right alongside skeptics, sometimes follow in the wings of Kuro, rebelling—sometimes violently—against God, and Spirit, and Son, as a response to pain and suffering. Kuro actively seeks to destroy Ori, who is the final lifeline of the Spirit Tree, thinking that this is the best way to save what she values most: her last child. However, we know that this logic stems from blind rage at the Spirit tree, literally indicated by Kuro’s illuminated eyes; that child would not survive in a dying forest. It is only after bearing witness to the genuine love between Ori and Naru (John 13:35) after Ori’s sacrificial act (John 15:13) toward the game’s conclusion does Kuro come to her senses, playing her role in the forest/kingdom restoration, seemingly in a repentant act.

Kuro’s fate is not an apotheosis, but there is merit in the parallelism between her reconciliatory act, and that of Jesus’ death. Without this death, we would be as “blind” as Ori’s forest (John 9:25). Praise Him, because of his blessed gift of reconciliation between the Father and his children, and the restoration he will one day provide to all Creation so that “bad things” will indeed cease. “Behold, for He will make all things new.” 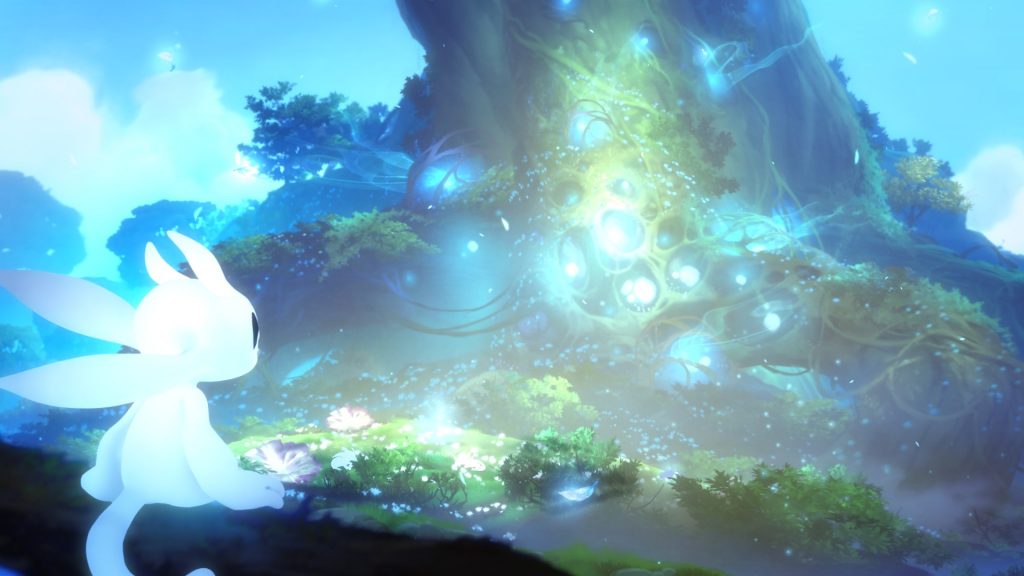