Greetings, Geeks! This is the fourth of a (hopefully) monthly series where our staff discusses some highlights of some of our favorite hand-chosen games. If there is a modern game that you would like to read what we have to say about it, let us know at contact@geeksundergrace.com!

After eight or nine years away from video games, I came back to quite a different world, one where indies now have a large influence. I don’t remember the original reason I purchased Shovel Knight—probably the recommendation of a friend. But what I quickly found was that nostalgia can carry you a very, very long way.

I can’t think of a particular thing that Shovel Knight does that makes it stand out above everyone else. There’s no unique twist or polish that I would call its defining characteristic. But its retro motif, in graphics, sound, gameplay, and even attitude, makes it more than the sum of its parts. It feels like a game that could have happened in 1989, but is somehow better because it’s happening now. Better games have come since. I could hardly argue that Shovel Knight stands above Celeste, for example, but I could not have asked for a better way to reintegrate myself into modern gaming than such a love letter to the NES classics I grew up with. 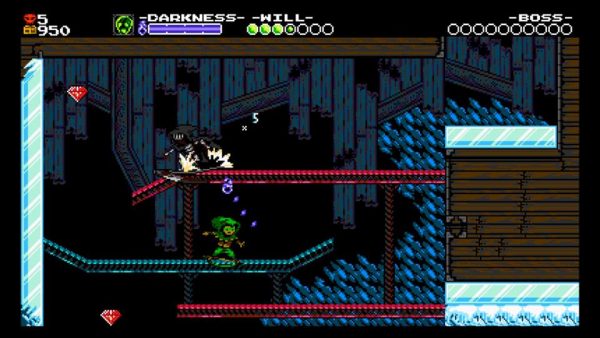 Shovel Knight is a beautiful throwback to the NES’ heyday in the late 1980’s. The 8-bit-esque graphics and soundtrack capture the feel of that era, and the gameplay feels like a melee-centric version of the classic Mega Man titles. From the moment the game began, I immediately felt at home, as if I was re-living my childhood gaming experiences.

The thing is, I never actually experienced the heights of the NES days. By the time I was old enough to play games, the 8-bit era had given way to the 16-bit era…and when I actually got a 16-bit console, the world had moved on to 32-bit and 64-bit games. Furthermore, I was a SEGA kid, cutting my teeth on the slopes and loop-de-loops of Sonic games. The rigid, blocky level design of Mega Man was something I wasn’t familiar with. 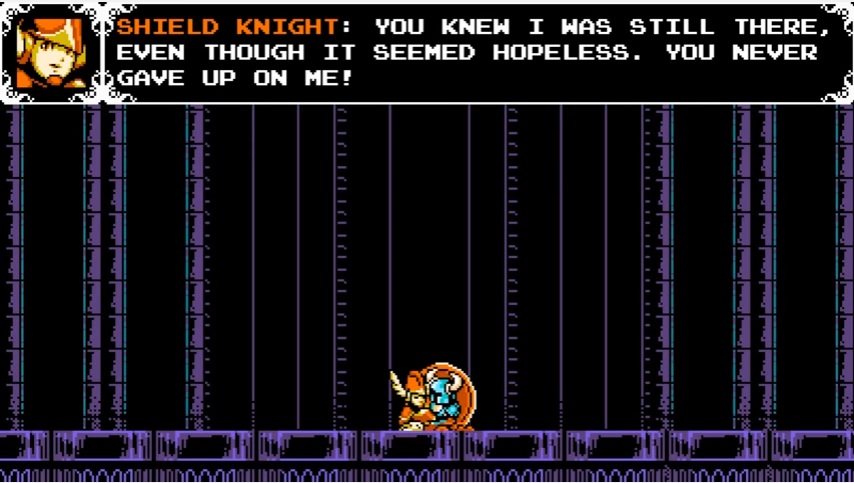 How is it possible, then, that Shovel Knight could elicit that kind of reaction from me? How could it remind me of experiences I never had?

Perhaps the answer lies in the way Shovel Knight executes its vision, and in the NES’ legacy. The NES reinvigorated a slumping industry, and its games proved foundational for the ones we enjoy today. So even though I never played those old NES titles, I absorbed their lessons from the countless other games they influenced. Shovel Knight, then, distills all of those lessons back to their basic form. Its entire design is finely honed, and every piece—gameplay, storytelling, artwork, soundtrack—complements the others and elevates the whole. Furthermore, it adds a few subtle tweaks, such as an expanded color palette and complex animations that wouldn’t have been possible had the game been made on an actual NES, thus ensuring that it doesn’t feel out of place in the modern era. It’s a game that instantly feels familiar, even if you haven’t played many games that look like it.

So regardless of your gaming background, you should give Shovel Knight a try. It stands as a strong link to gaming’s past, a reminder of how we got to where we are today. And it’s just plain fun. 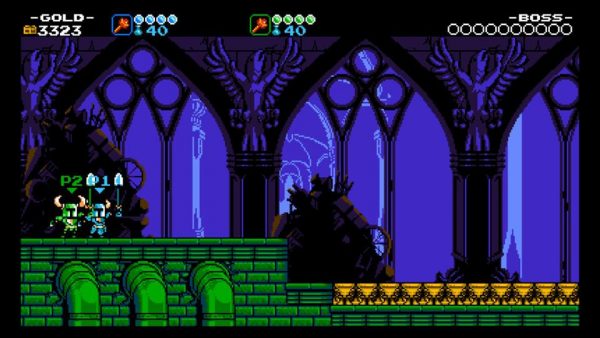 I’m a little older than Michael, so I was indeed old enough to play Mega Man on the OG NES. In fact, I have played them on the NES, SNES (MM7), PSX (MM8), as well as the Anniversary Collection. I was also among the elated when Capcom announced that Mega Man 9 was coming coming to WiiWare in 2007(released 2008), since it would be the first entry in the main series since 1996. But then I actually played the game, and concluded that those mechanics should have been left in the prior decade.

I cannot shake this same feeling with Shovel Knight. It strikes me as a game designed to appeal to those longing for nostalgia, or for folks like Michael, a placebo effect for a missed era. I actually still have access to my old (working) NES from 1985, but it will stay under my parent’s cabinet collecting dust for the simple reason that I have no desire to return to that epoch.

Shovel Knight mimics side-scrollers like Ninja Gaiden right down to enemies barely hiding below the surface of a platform suspended above a bottomless pit. And sure enough, when I jump to it, the collision detection registers the damage, and Shovel Knight‘s recoil animation sends me spiraling to my doom, forcing me to restart the level. Given my background in video games, a lack of checkpoint is not foreign to me; however, I also point out that checkpoint mechanics were added in the 16-bit generation with games like Sonic the Hedgehog and Super Mario World as quality-of-life features to reduce the frustration of having to start all the way over—and those games were relatively easy!

Even modern versions of yesteryear’s “Nintendo-hard” games, roguelites such as Dead Cells, do not instakill from bottomless pits.  More importantly, Dead Cells is a fast game, or rather, it is fast when played optimally, as the bonus cell chests unlock when players reach the corresponding timed door within certain intervals. Shovel Knight, in contrast, plods along, making my prior failures late in the level that much more excruciating. The dash boots upgrade in games like the Mega Man X series is a key reason why I prefer them over vanilla Mega Man. And Shovel Knight models itself after the latter with bare-minimum modern accommodations.

While Shovel Knight is a deserved smash-hit in it’s own right, I couldn’t help but notice it’s influences and similarities in my journey through its world. From the idea of bouncing off of enemies, or picking up gold when “fallen in battle,” there are many other games Shovel Knight has brought to my mind.

A central part of Shovel Knight’s gameplay is the ability to bounce off of enemies with a shovel, therefore being able to reach higher areas than if you had just jumped. To me, this is possibly one of the most obvious ties to other games on this list: DuckTales.

Disney’s DuckTales was a super-popular NES game released in 1989, surrounding Scrooge McDuck in his journey to—you guessed it! Gather Money by a) bouncing off of people’s heads and reaching secret areas, and b. defeating bosses at the end of each level of your choice. You know, basically the entire gameplay of Shovel Knight.

Combat in Shovel Knight is pretty simple: you attack enemies with either your trusty shovel, or an artifact that you find or buy in and after each level. Because of its side-scrolling mechanic, this immediately reminded me of Zelda II, the side-scrolling, RPG black sheep of the Zelda series. As per typical Zelda format, Zelda II involves going into temples, attacking enemies with your trusty sword, and retrieving stuff: an item/enchantment, and a gem for plot enhancement. Shovel Knight’s gathering of items and quest to defeat the Order of No Quarter directly emulates that system in my mind.

Taking a bit from points 1 and 2, the platforming in Shovel Knight features pogo-ing your way through and over various cliffs and pitfalls. With the bounce mechanic from DuckTales, this can be really fun and satisfying. However, it doesn’t combine well in my mind with point 2: side-scrolling combat. DuckTales nailed the formula by having very limited health but also sparce enemies, preventing overwhelming platforming difficulty (or being bounced off a cliff), and Zelda II’s combat mostly didn’t involve platforming*. This prevented the cheap death mechanics I suffered in Shovel Knight—bumping into an enemy’s projectile and having no way to save myself from falling down a pit.

*Zelda II does have instances of platforming and “cheap death,” but those are levels I dislike and avoid for good reason.

While not strong enough to garner a full point, dying in Shovel Knight reminds me of Hollow Knight, in that you have a chance to recover loot by making it back to where you died, but lose it all if you fail to do so, or fail in completing the task (such as recovering the bags of gold you dropped). Considering Hollow Knight was released after Shovel Knight, it might be safe to say Shovel Knight had an influence there.

As previously mentioned, Shovel Knight allows one to attack in various ways via use of Artifacts acquired throughout the game. When selecting an artifact, though, I again felt reminiscent of Zelda II’s spell selection, although Shovel Knight fortunately also has a quick-select mechanic using your controller’s trigger/bumper buttons.

The way levels can be selected and played definitely brings me back to the NES era via games such as Mario 3, Mega Man, and (again) DuckTales. However, in this section Shovel Knight definitely gives more to Mega Man’s credit. Similar to Mega Man, a combat side-scrolling platformer series, Shovel Knight involves acquiring abilities that can help with platforming, with abilities that you unlock according to which level you chose to complete first, which is something that people love about the Mega Man series to this day.

The music of Shovel Knight is good. I love famitracks, and I believe it was intentional for Shovel Knight to have a retro-soundtrack, considering the retro appeal in the rest of the game. However, I felt the track “A Cool Reception” sounded a little TOO familiar… and sure enough, I was right. After some searching, I found It’s essentially a combination of several different dungeon themes from The Legend of Zelda’s GameBoy titles. Notable examples include “The Dancing Dragon Dungeon” from Oracle of Seasons, The “Catfish’s Maw” in Link’s Awakening, and let’s not forget a little of Castlevania’s “Vampire Killer” and “Simon’s Theme” at the beginning for good measure. Regardless of the similarities though, “A Cool Reception” is probably one of my favorite tracks in the game, and I don’t believe is actually duplicative of the mentioned tracks. It was just enough to get my eyebrow raised, google searched, and nostalgia running.

Overall, Shovel Knight is highly reviewed for good reason. For those who were raised in the NES era, it is a refreshing call-to-form in the midst of modern games, and it’s challenging to say the least. However, I think that in order to truly appreciate this masterpiece, one should also acknowledge the greatness of the games that came before and inspired it. I hope this piece helps achieve the purpose of doing that.