Idolatry Under the Sea 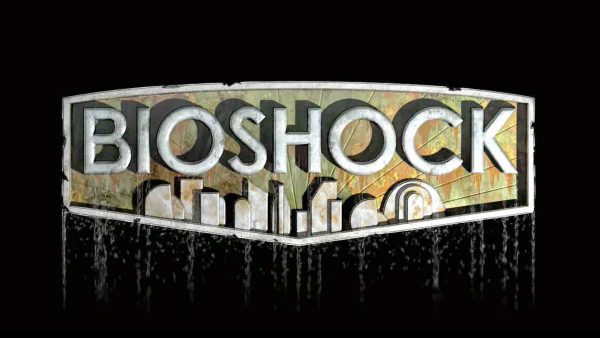 Beware: spoilers for Bioshock below!

Idolatry exists everywhere in secular society. Rock stars, movie stars, rap stars, and even some prominent scientists are considered idols by our community. It seems innocent enough; these are just folks that the populace wants to emulate. Some people even see idolizing Bill Nye or Cardi B as positives because of the things these folks have brought to this world. Unfortunately, the idolizing of people is only a tiny facet of idolatry in everyday culture.

People make idols of money, race, sexual desires, and personal identity. We even make idols of purely positive things, such as love or freedom. Is this idolatry harmless, though? In his epistle to the Romans, Paul asserts that idolatry of anything in creation ultimately ends in destruction. In the story of Bioshock, Andrew Ryan idolized freedom to the point that he created the city of Rapture. 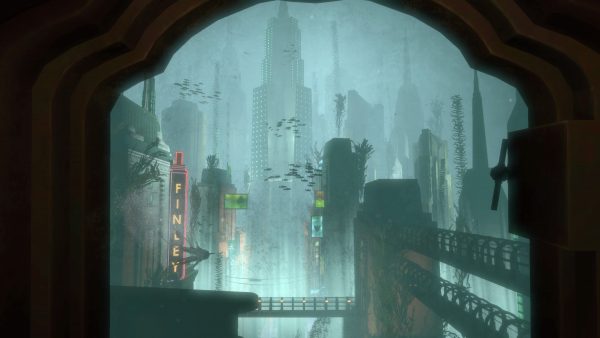 The idol of Freedom

Bioshock outlines the story of the underwater city called Rapture, founded by Andrew Ryan in the 1950s. His goal was to create a utopian, anarchistic society where anybody could do anything they wish, unbound by the perceived shackles placed upon science and art by morality and law. The game outlines this vision at the very beginning of your adventure, as you view a prerecorded message made by Ryan himself as he speaks in grandiose terms about this idealistic city that you are about to enter. 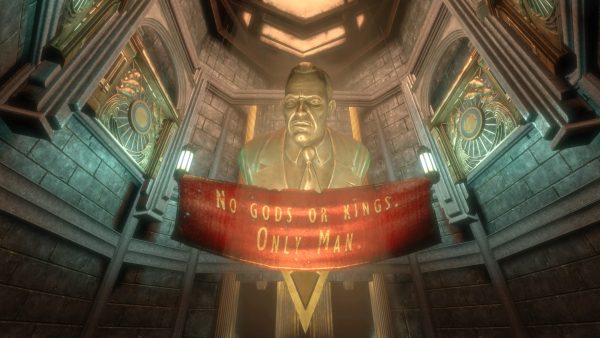 In the lack of legal or moral restraint, some seemingly great endeavors came from the city. Medical experimentation allowed for the discovery of Adam, a substance that allowed a person to change their genome and could cure diseases like cystic fibrosis or cancer. Rapture no longer restrained art, so the artist could paint or sculpt as they saw fit, calling attention to human society’s previously taboo aspects.

However, with the lack of restraint, these initially great endeavors turned to evil. Humans changed their genome to shoot electricity from their hands or take revenge upon their enemies in various ways. The physician and the artist soon became one as Dr. Steinman began to mutilate plastic surgery patients in the name of art. Rapture went from a utopian society to a degenerate society within a few short years. How could this have happened? 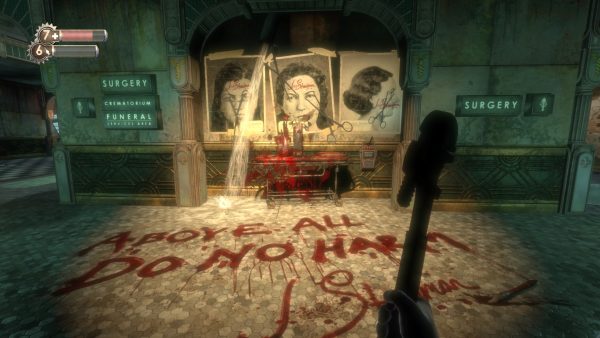 “Therefore, God gave them over in the sinful desires of their hearts to sexual impurity for the degrading of their bodies with one another. They exchanged the truth of God for a lie, and worshiped and served created things rather than the Creator—who is forever praised. Amen.” – Romans 1:24-25

Paul spent the last half of the first chapter of Romans detailing the logical conclusion of idolatry. He warned that people who place creation on a pedestal above God are sinning. Paul also warned that God would give any who serve false idols over to their sinful natures. He lists in verses 29 to 32 the things that people do when given to their sin: “They have become filled with every kind of wickedness, evil, greed, and depravity. They are full of envy, murder, strife, deceit and malice. They are gossips” (Romans 1:29).

Every citizen of Rapture embodies this transformation. During Bioshock, the main character explores Rapture after surviving a plane crash near the city’s oceanic entrance. You soon come across a class of people called “splicers,” people who have used Adam to the point of addiction. Adam addiction consumes these folks, and they harm anyone, or anything, that gets in their way. Those who aren’t addicted to Adam are doing evil in other ways. Dr. Steinman, as mentioned above, is performing grotesque plastic surgeries on patients in the name of art. Frank Fontaine forcibly manipulates people to take over control of Rapture. Andrew Ryan harbors an intense hatred for all who fail to live up to his utopian dreams. Most everybody in Rapture held an aspect of creation over God, and depravity set in because of it. 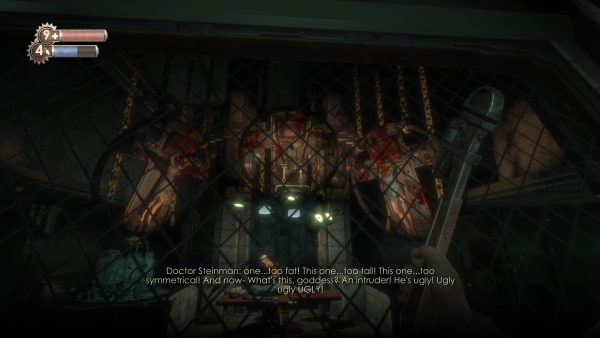 Our society is not so different from Rapture. Nobody is immune from placing an aspect of creation on a pedestal above God. In the 17th and 18th centuries, the Enlightenment and Romantic ideals idolized human rationality and human emotion, respectively. In science, materialism idolizes only material creation. Some current movements that have sprung from the Christian Church even idolize love above God. These idols will harbor a few consequences: they strip humanity bare to match the worldview, and they replace God in the worldview.

According to Nancy Pearsey in her book Finding Truth,  any idol-based worldview is inherently reductionistic. The worldview will compress people to a few descriptive boxes and ultimately restrict them. For example, as seen in current scientific circles, a materialistic worldview treats humanity as nothing more than matter and chemical reactions. Emotions are just chemical processes in our brain that allow for our genes’ survival. That’s it. Other worldviews idolize emotions, which push human rationality away. These all strip humanity of a prime component of our nature.

When we reduce people to less than their total, we invite injustice and evil in our interactions. Materialism potentially could lead people to treat others as just objects. Emotions aren’t real, and nothing exists outside of the material universe. Why shouldn’t we treat people as nothing more than higher animals? As Andrew Ryan would say, why should we submit to morality? 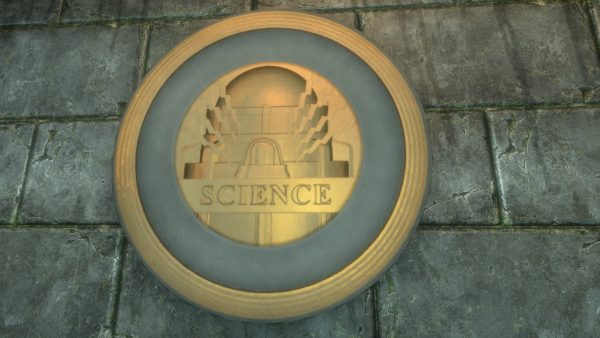 Another adverse effect of idolatry is that all idols replace God. That’s the basic definition of idolatry that God gave us in the Ten Commandments. The first and second commandments in Exodus 20:2-6 state plainly that we should not worship any other god, including idols. When we place an aspect of creation on a pedestal above God, we are, in essence, replacing the position God should hold in our lives.

When we replace the position God holds, behavioral changes are bound to occur. Paul stated in Romans 1 that God gives people over to the sinful desires of their hearts. Therefore, we reap the natural consequences of the sinful seeds we sow. For example, if someone holds up sex and pornogrophy as idols, they gradually become entrenched in that sin and start to see the opposite sex as sexual objects. True, beneficial relationships are then twisted, and sex becomes the lens through which a person interacts with romantic partners. To some people, the idea of escape is nonexistent. How can we fix something that brings both pleasure and destruction in equal measure?

The residents of Rapture saw their pleasures and freedom as the pinnacle of life. They were so entrenched in their way of thinking that few people dared to question the idols they had made for themselves. Rapture fell into decay and power struggles because of a lack of morality and a lack of accountability. By the time the protagonist arrives in Rapture in Bioshock, the city is a shadow of its former glory.

What is the solution?

The starting point for the Church to address idolatrous issues is to come to these folks with the grace of God in mind. Show them the logical conclusion of their idolatry and offer the Gospel as the replacement. Nancy Pearcey also stated that we must provide a suitable replacement when we argue against a person’s faulty worldview. If we don’t, some other worldview will creep in and take over. No matter what, we will always worship something, and the Church has the ultimate answer for who should claim that spot in our lives.

Putting God in the top idol position in our lives is the only reasonable answer. When we focus on God and His words given to us through the Bible, our lives will change for the better. Paul wrote in Colossians Chapter 3:1-4, “Since, then, you have been raised with Christ, set your hearts on things above, where Christ is seated at the right hand of God. Set your minds on things above, not on earthly things. For you died, and your life is now hidden with Christ in God. When Christ, who is your life, appears, then you will appear with him in glory.” 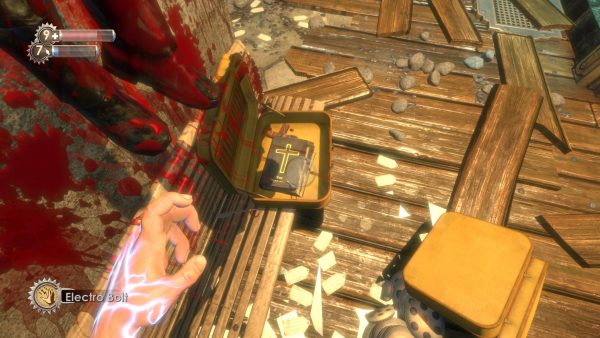 In Bioshock, some brave citizens of Rapture understood the need for Jesus in the lives of others. They smuggled in Bibles en masse to give to the populace so that God could save the people. Unfortunately, Rapture did not repent in time to prevent multiple tragedies from destroying the city and the people who dwelled there. What changes could we have expected should the missionaries have changed the hearts of Rapture?

We reap what we sow

Paul stated in Galatians 5:22-26 that the fruits of the Spirit come to us when we place God above our sinful desires. These fruits stand in direct contrast to the fruits reaped from a sinful nature, which Paul wrote about in Galatians 5:19-21. The fruits of the Spirit are things like love, peace, patience, and kindness. The fruits of our sinful nature are things like sexual immorality, hatred, discord, and jealousy. Paul consistently warns the Church of the repercussions of placing any aspect of creation above our God. 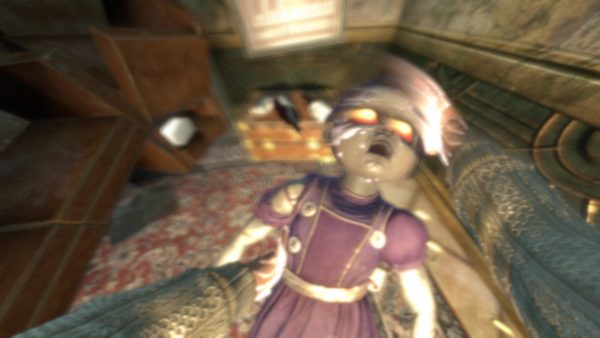 An Inside Out Change Only God Can Give

My brothers and sisters, the Church in the United States has numerous examples of placing idols, such as politics, above Jesus. Our culture is full of idolatry. Every person is susceptible to placing an element of Christianity above God. We must remain vigilant in keeping God in the top position of importance in our lives. We must be able to recognize when aspects of creation sneak in to take over that spot. Together, my friends, we can ensure that God is the ultimate desire of our hearts. Together, we can help the Church purge its idols.