Review – To Hell With Hell

Though we published a preview of To Hell With Hell on August 3, 2018, our policy here at Geeks Under Grace is that we do not review games until they have exited Early Access. It officially launched out of Steam Early Access with a “Purgatory” update on February 25, 2020, so I am behind the ball with my follow-up review. In my defense, this is the kind of game that puts me in the awkward position of having to report that it declined before launch. Therefore, I am writing this review to warn players and developers alike how not to release a game. 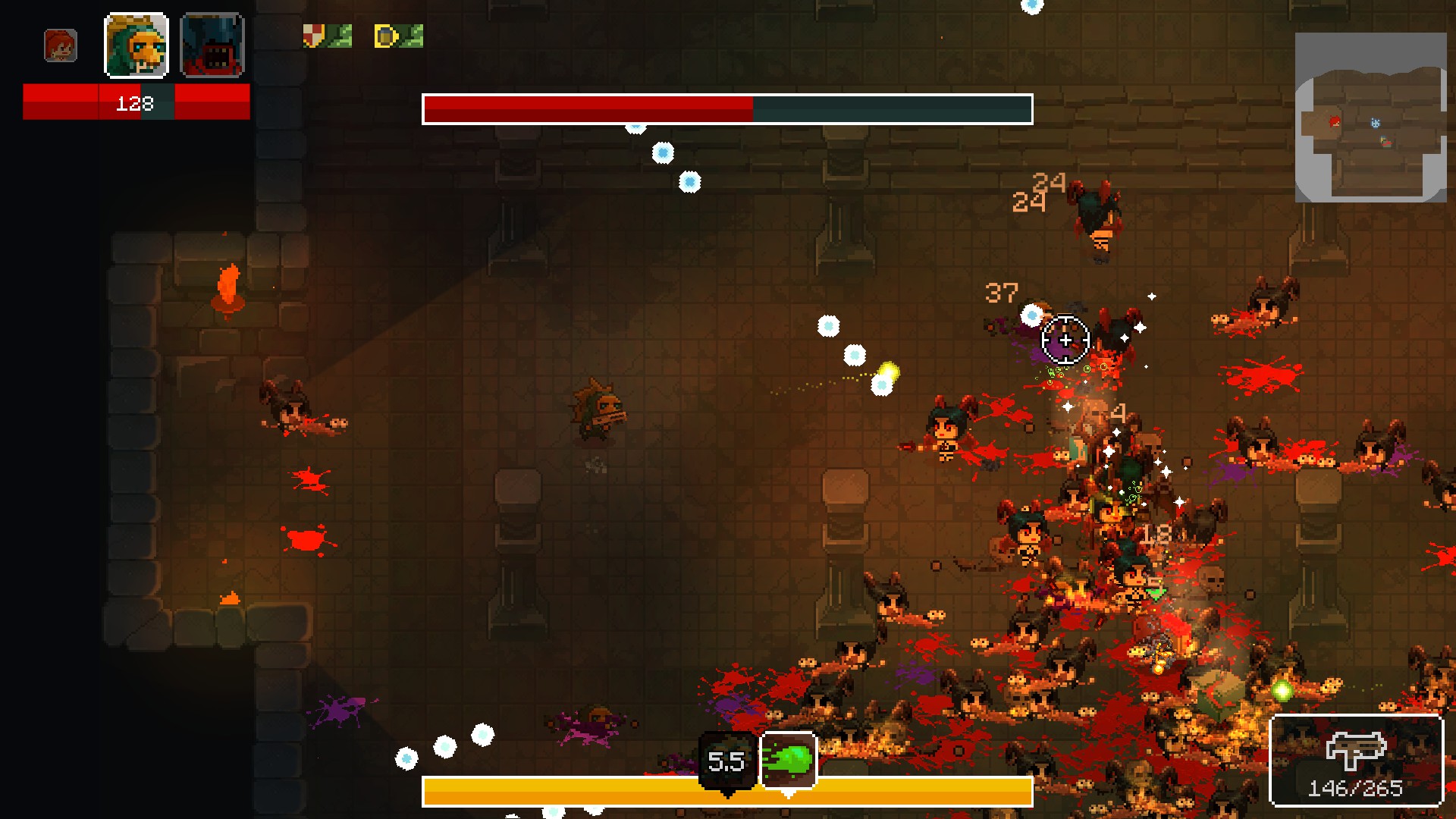 Let the bodies hit the floor.

As To Hell With Hell is a shooter, that is what players should expect to do: shoot. Upon death, most sprites, including the player’s melt into a blood pool, eyeballs popping out for humorous effect. Readers who can handle the above screenshot can handle anything else this game has to offer. 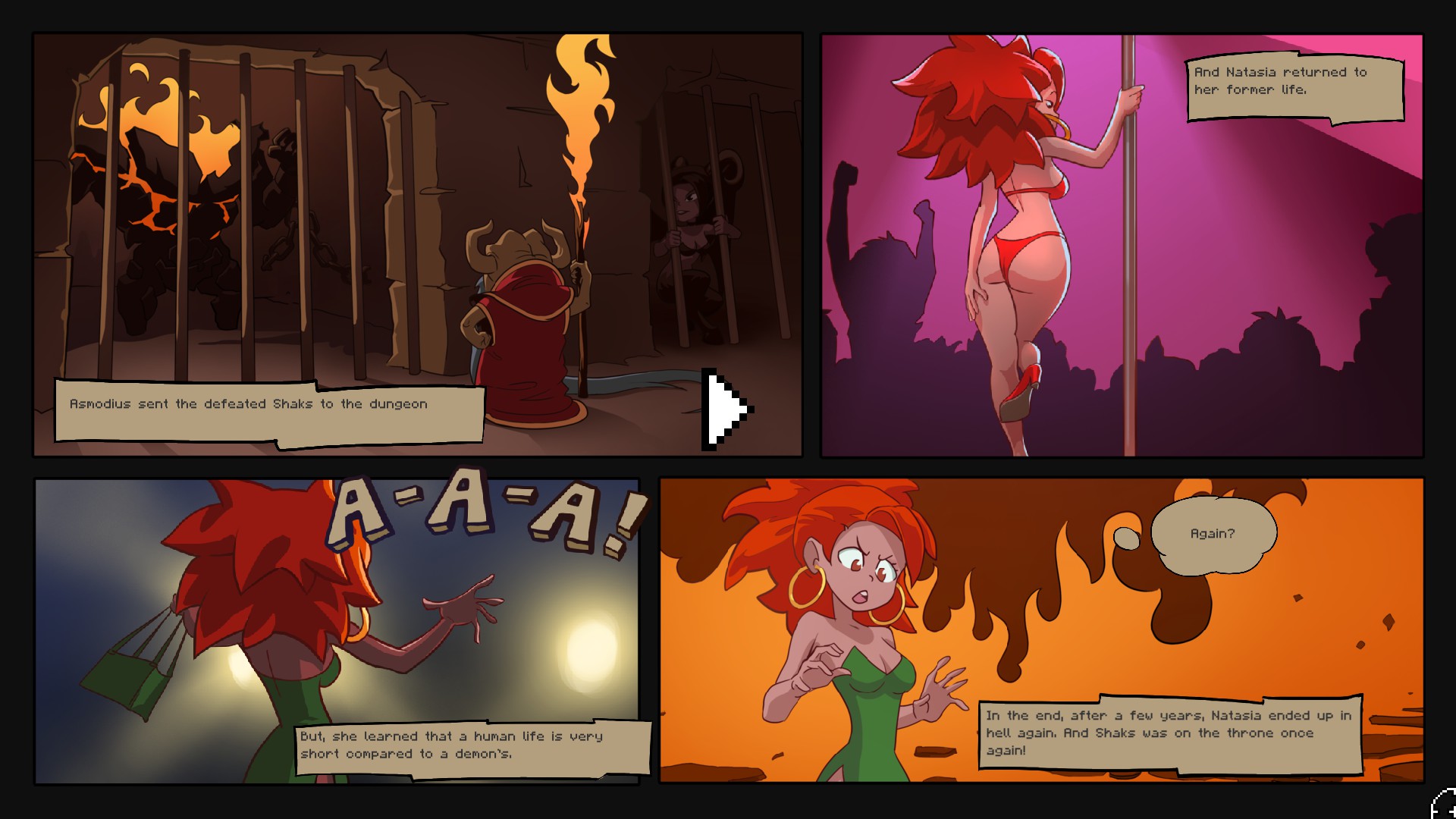 Natasia exoticly dancing all the way to a very hot place.

For the Early Access version of To Hell With Hell, I wrote the following, with some changes:

Natasia’s character profile reveals that she is an ADULT entertainer, and ends up in hell because she took a wrong step during a pole dancing performance and fell to…hell. By playing through the first two difficulties, I came to realize that her story, with some humorous twists, is a metaphor for how we might fall in the most egregious or seemingly negligible ways. After all, Romans 6:23 says, “the wages of sin is death, but the free gift of God is eternal life in Christ Jesus our Lord.” As I was discussing this game with my wife, we said to ourselves out loud, “Jesus loves people even though they may strip,” and we meant it. 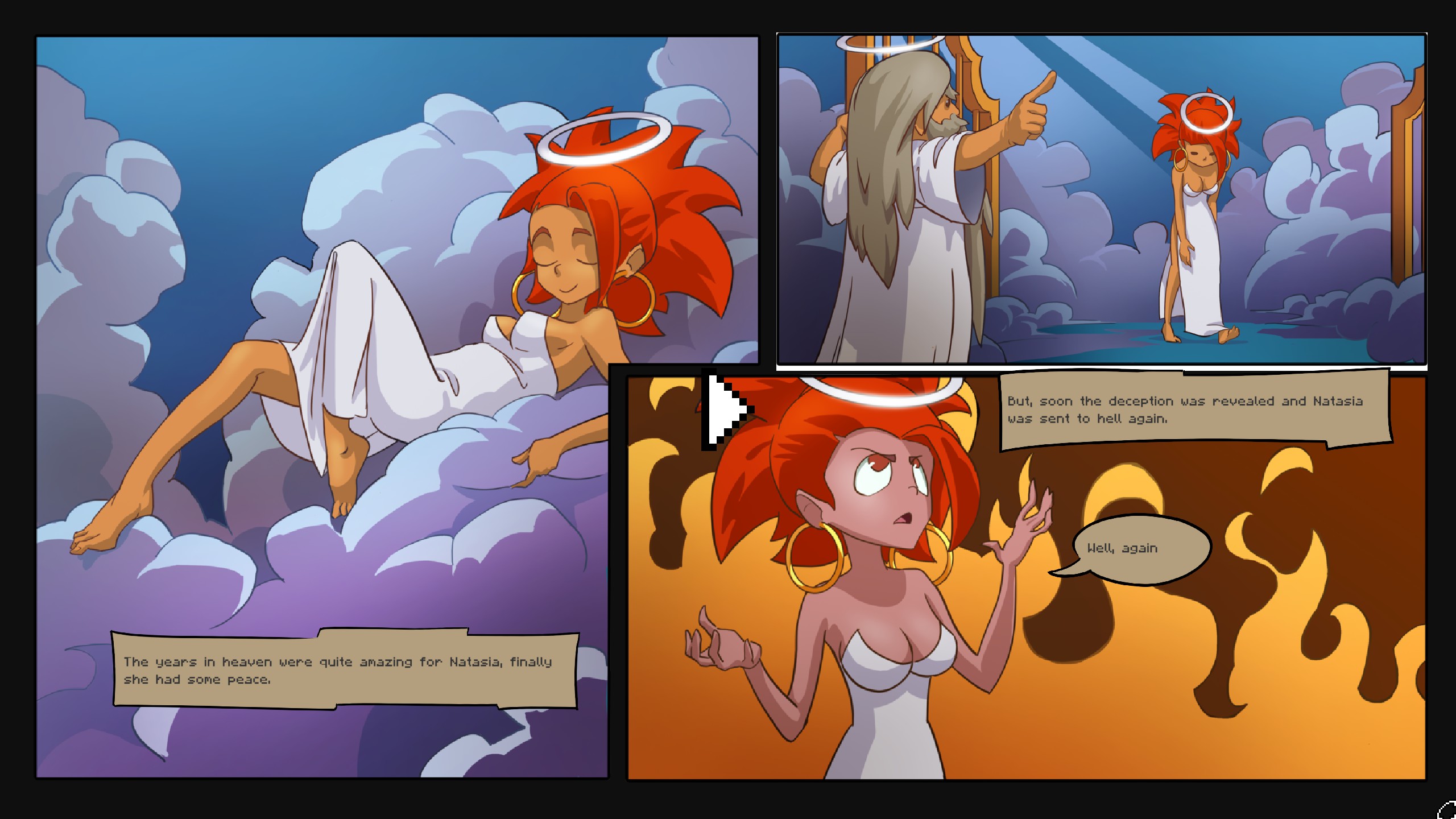 Nastasia trying to pull a fast one.

As edgy as this game tries to be with its imagery, its portrayal of hell is a gag not to be taken seriously. Binding of Isaac, this game is not. Comparatively, the Diablo games, even the original, makes To Hell With Hell look cartoonish. What these games share in common, is that one can fight their way out of hell, though To Hell With Hell makes fun of this in its ending. 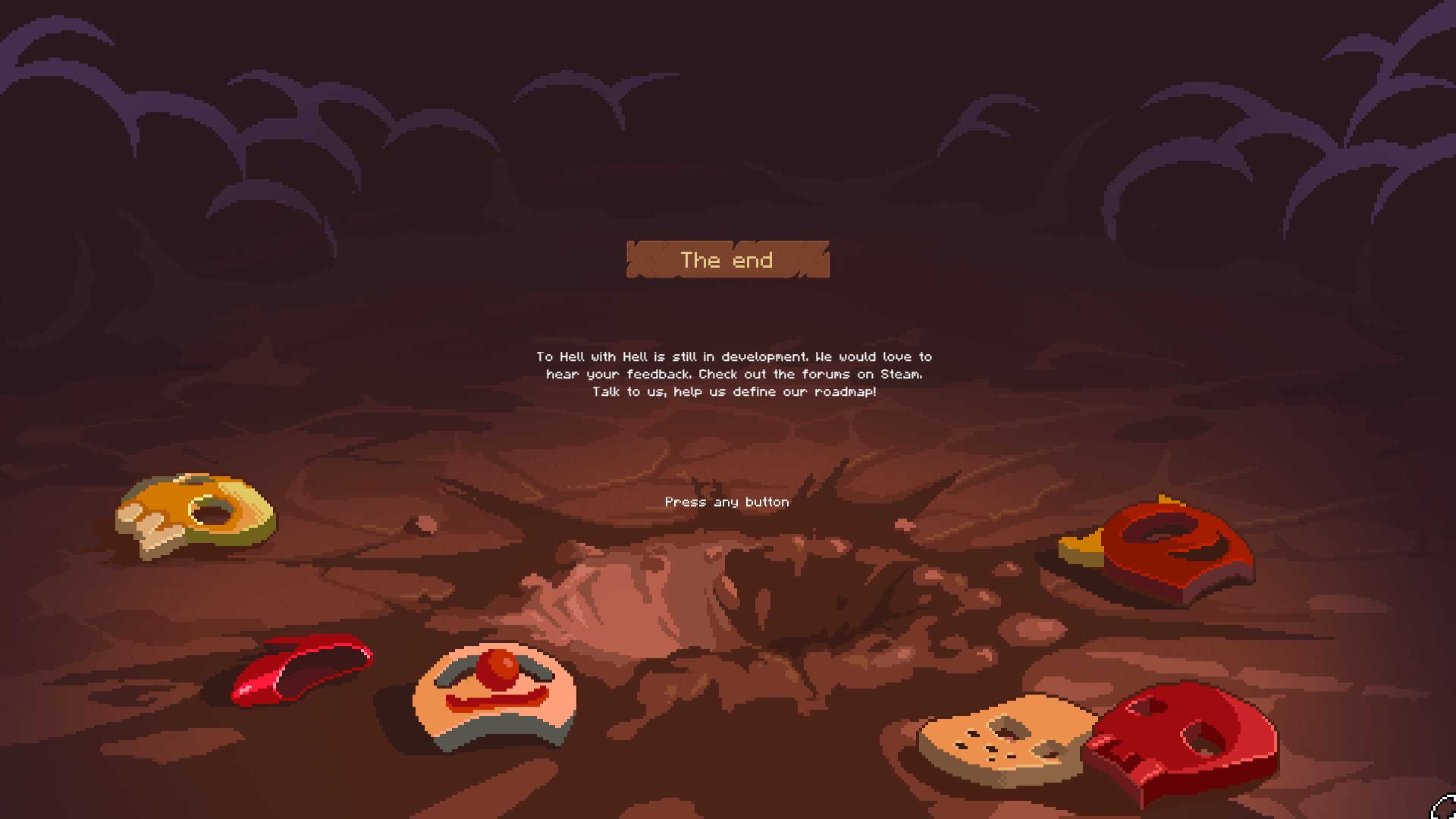 I beg your pardon! I thought this was a FINISHED game?!?!

Yes, the screenshot above is not from the preview version of To Hell With Hell, but what is supposed to be its “final” version. I was surprised to see it, but not too much. I “cheated” for once, reading a few user reviews and learning that the developers at Lazurite Games dropped a hot patch in February, and dipped. They have not been seen since; their last news update indicates that the development team had dissolved for personal reasons.

Lazurite Games claims that they did not want To Hell With Hell to become abandonware, but actions speak louder than words. Upon firing the game back up, I was met not only with loading times reminiscent of the PS2 era, but also with game freezes. Any time the game had to process a new element, such as the death of a new enemy, opening a chest, or picking up a mask, it would freeze, as if to load the new asset. During actual loading screens, an impatient player might cause the game to crash while pressing keys or clicking before it is ready to register any commands.

I have been gaming long enough to remember when games like Heroes of Might and Magic IV would suffer from memory leaks. When To Hell From Hell‘s performance dipped, I began to wonder if it was suffering from similar symptoms. Alt-Tab to the desktop would crash it. So, I turned on windowed mode and opened up task manager, and guess what I found? 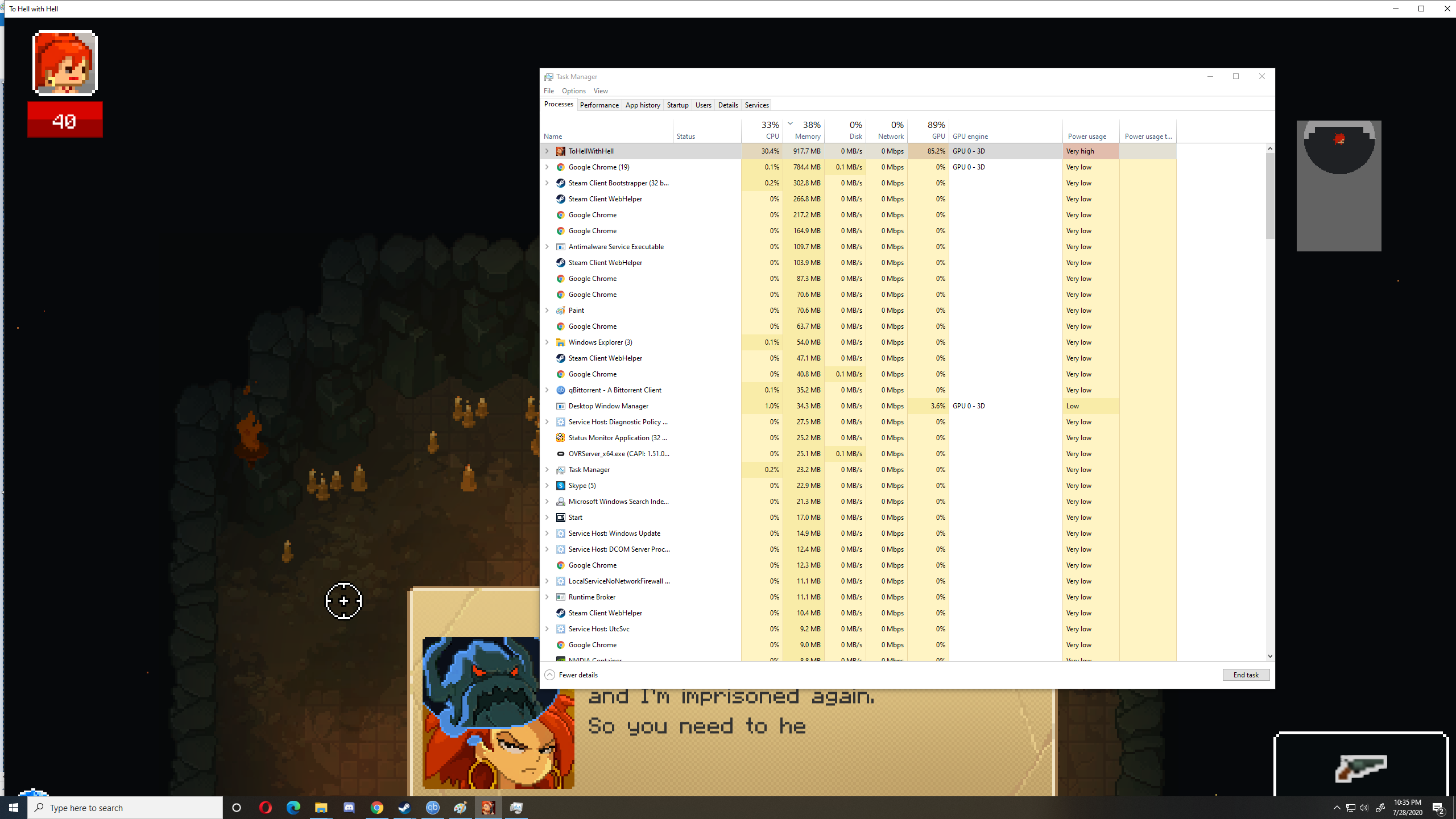 Bruh. This don’t make no sense.

The minimum requirements for To Hell With Hell indicated Windows 10, an i5, 4 GB of RAM and a GTX 760. My specs far exceed these, yet it is clear that a game as simplistic as this is not only unoptimized, but it is also a detriment to the CPU. Just sitting idly at the tutorial, task manager would run up to 90% load!

What could have been.

This did not happen during To Hell With Hell‘s Early Access phase, as my QuickScope video demonstrates. If it was Lazurite Games’ goal to sabotage to Hell With Hell, then they succeeded; if they actually wanted to finish the game to make it playable, they failed epically.

For gamers who are not deterred by randomly choppy gameplay or inappropriately long loading times, this is the part where I would usually discuss…its flaws. But I have already done that; I normally open with the positives. The fact of the matter is, I do not believe that To Hell With Hell is worth the effort, because between Nuclear Throne, Enter the Gungeon, Wizards of Legend, and I, Dracula: Genesis, there are plenty of finished and unfinished games alike that are not a waste of time. It is unfortunate that this happened to To Hell With Hell, because its potential was squandered.

To Hell With Hell is a what happens when catastrophe strikes an indie development team; their project suffers, too.