Review: Through the Ages (iOS) 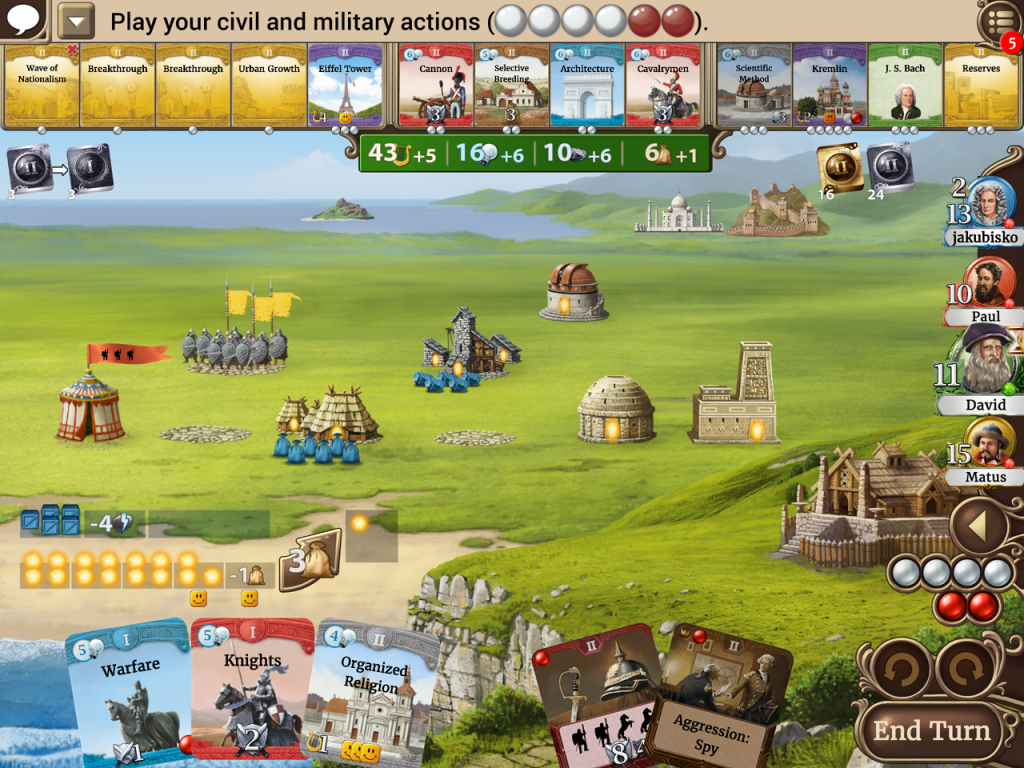 The board game is designed by Vlaada Chvátil. Chvátil is a well known board game designer who has published many games through Czech Games Edition (CGE). The two, together, have a history of sometimes extremely complex games, coupled with clever jokes throughout the rule book. Vlaada Chvátil has designed Codenames, Galaxy Trucker, Dungeon Petz, Dungeon Lords, Through the Ages: A New Story of Civilization, and many more.

CGE is a board games publisher, originally founded in 2007. CGE has since published over 40 games and expansions, including Adrenaline, Tzolk’in: The Mayan Calendar, Alchemists, Space Alert, Codenames, and many more. CGE Digital is the digital tabletop branch of CGE, who have published a few stickers apps for their games, but also companion apps for Codenames and Alchemists, as well as a digital version of Galaxy Trucker, called Galaxy Trucker Pocket. 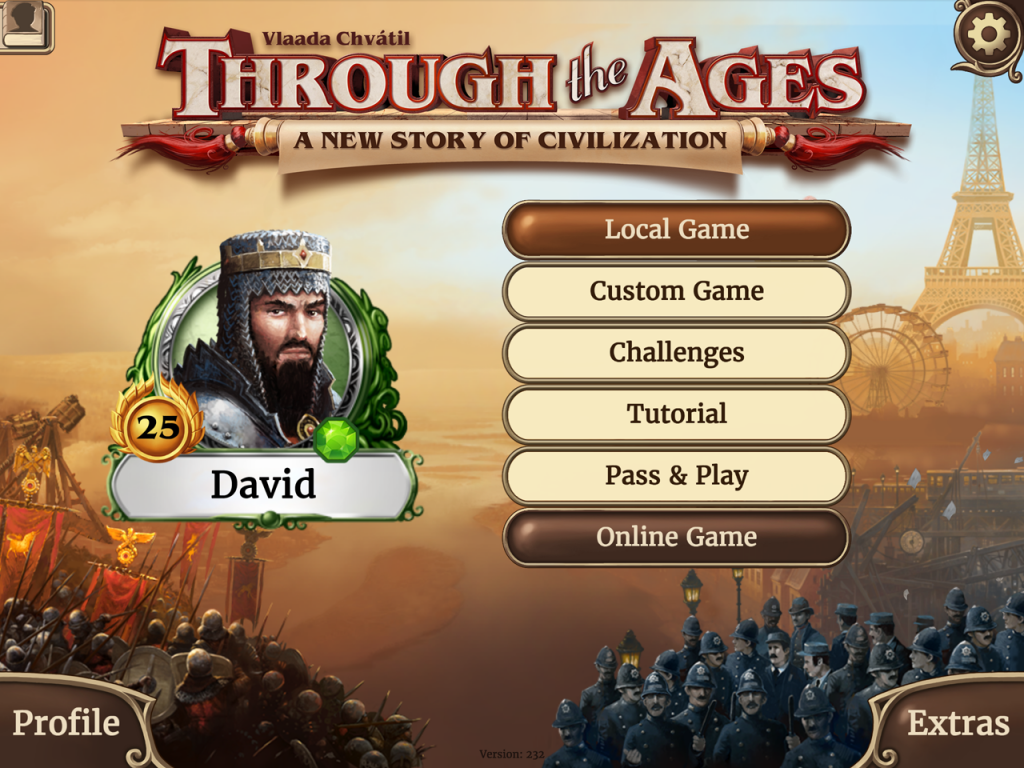 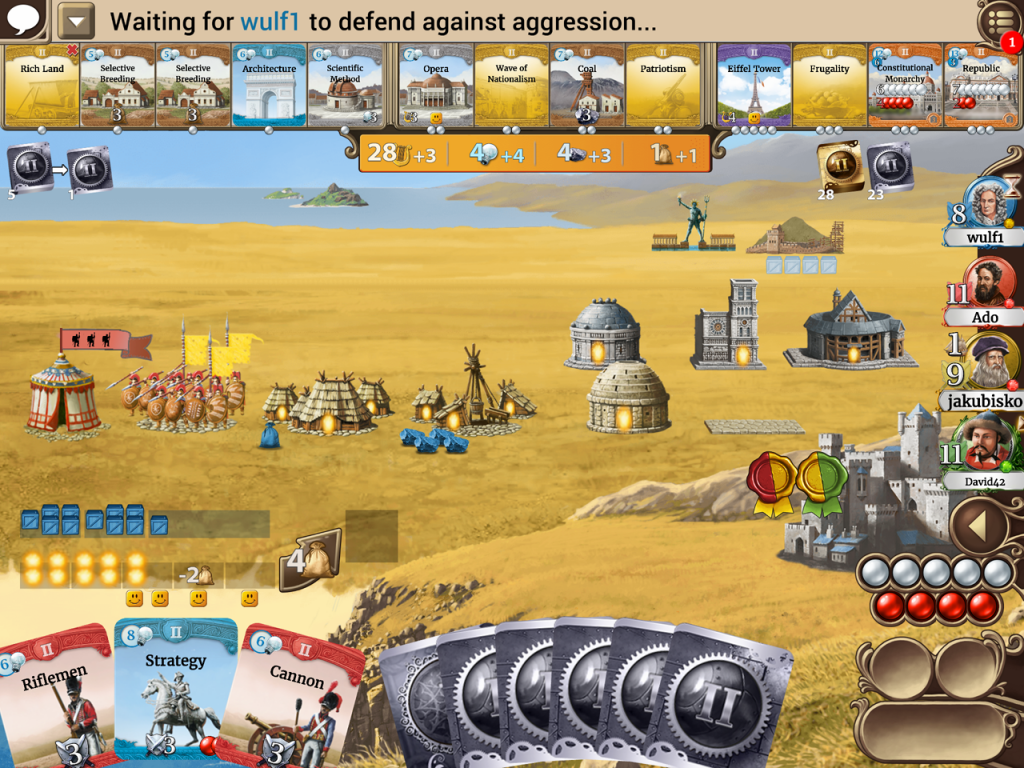 Early steps of a four-player game.

Through the Ages is finally digital. It bears repeating twice. Through the Ages is known throughout the tabletop hobby as “the greatest game no one wants to play because it’s too long and too huge.” Though I’ve never played the tabletop edition of Through the Ages, I’ve played enough games at this point where our group has finished a night of board gaming and had the common sentiment, “this game was fun, but it would be better as a computer game.” I believe Through the Ages fits this category. Rumor has it, Through the Ages might have a Steam release in the future, but for now this app release will most certainly do.

In Through the Ages, players take command of a brand new civilization and guide it through…well…the ages.

Over the period of three ages, including a brief stint in a pre-historic age, players must wisely choose leaders, governments, technological advances, resource enhancements, wonders, and more. The game is driven by cardplay, and by drafting cards from a common pool, players will spend actions to get bonuses, grow their resource production, and ultimately refine their engine-building techniques to create a well-oiled machine. Players will duel one another by driving political cards into the mix, as well as creating stronger armies using units and specialized tactics cards to increase military power, preying on weaker civilizations to wound them and take their stuff. This continues over three ages with the player who has amassed the most victory points being crowned winner and  the most influential civilization.

Civ building is the joy of Through the Ages. Deciding which technologies to take and grow is critical to wise empire growth.

For those from a PC gaming background and unfamiliar with the tabletop hobby, this plays somewhat like anything from the Sid Meier’s: Civilization series. The largest difference between the two is outside of empire and resource management, Civilization also encourages exploration, grid movement, and micro-managing units. In Through the Ages, players don’t do anything in the way of moving along a map or exploring, and instead manage resources, construct buildings and wonders, pass policies, research technologies, and basically anything else revolving around macro strategies.

Where other card games try to make an argument for their length, they usually end up as the farceurs of the card game genre. These are drawn out games where too few interesting things happen, story lines remain the same between games, and players realize they’d rather be playing a game with a board. Here, Through the Ages makes an incredible case for long, complex, thematic card games with lots of substance, dozens of viable strategies, and reasons for vested interest of its players the entire way through.

My only experience with Through the Ages is this digital edition, but it should be noted that playing board games digitally is typically never something on my radar. I might play a game once or twice, but the thrill dies fast. I crave the experience of friends around the table, and if I want a digital gaming experience, I’ll play through my Steam library. Not the case with this one. Through the Ages has reinvigorated a desire to pursue and enjoy digital tabletop implementations, and it’s not just because of how great of a game this is, but also because of the effort to replicate it. 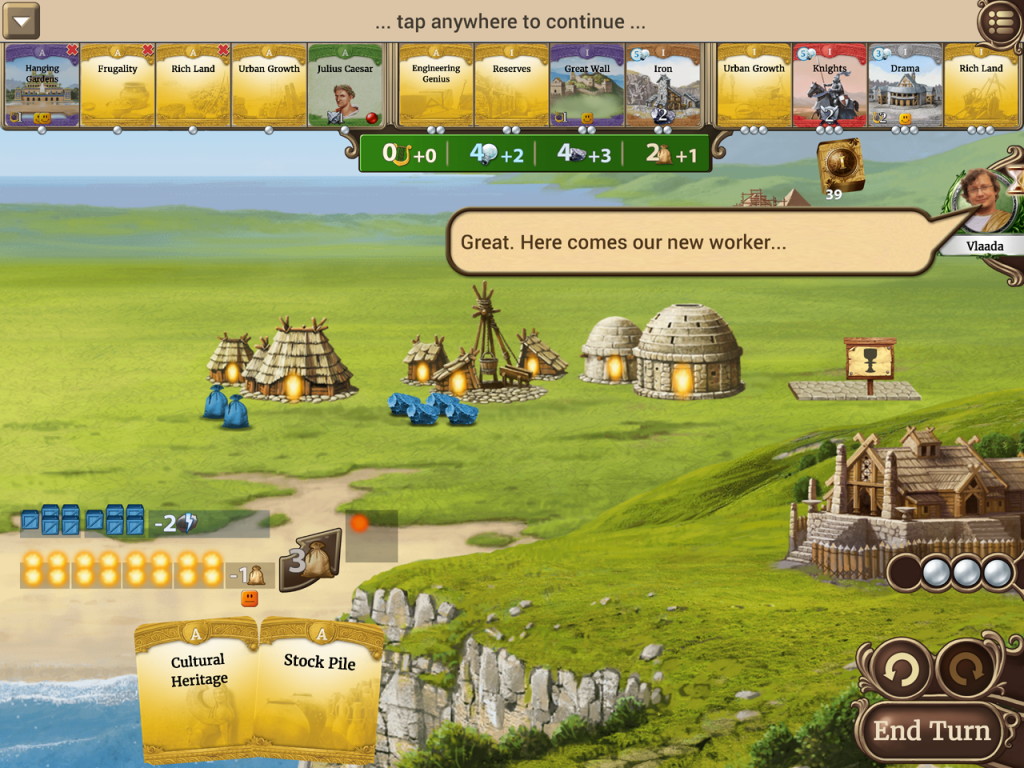 Vlaada is a cheeky fellow. This tutorial is a hoot.

On starting the game, whether one has logged a dozen plays of the board game or is totally new, I recommend playing the tutorial.

Those familiar with CGE and Chvátil’s rule books will quickly feel at home. This is a wisely designed tutorial created to engage players with both humor and mechanics. Many digital tabletop tutorials have been hard to follow for me, but this one is excellent. Vlaada Chvátil acts as a leader card in-game. Players will hire him and he will step players through nearly every possible scenario, teaching common mistakes and powerful opening strategies. Sprinkled into the tutorial are clever jokes and hilarious critiques on the gaming industry that I won’t spoil. In fact, one moment of the tutorial nearly forced me to drop everything to immediately start a rebuttal article against CGE, only to discover the joke a moment later. Joke’s on me.

I played on my iPhone 7 and typically when I play digital tabletop I have issues playing intricate board games because the screen is so small. Not the case with Through the Ages. Creating new workers is as easy as tapping the bag of food. Dragging this tiny worker onto a building to create production doesn’t feel like a chore for someone like myself with big fingers. The game even reminds you of bonus cards in your hand that might make your upgrade cheaper, which is a huge boon for those unfamiliar with the game. Switching to your opponent’s nations is as fast as tapping their icons. Checking out your military strength and tactics is done by a swipe or tap onto the military icons. When rushing to finish a turn, the game displays a reminder that there are either no actions possible, or lets you know you forgot to grab an extra card or spend production. 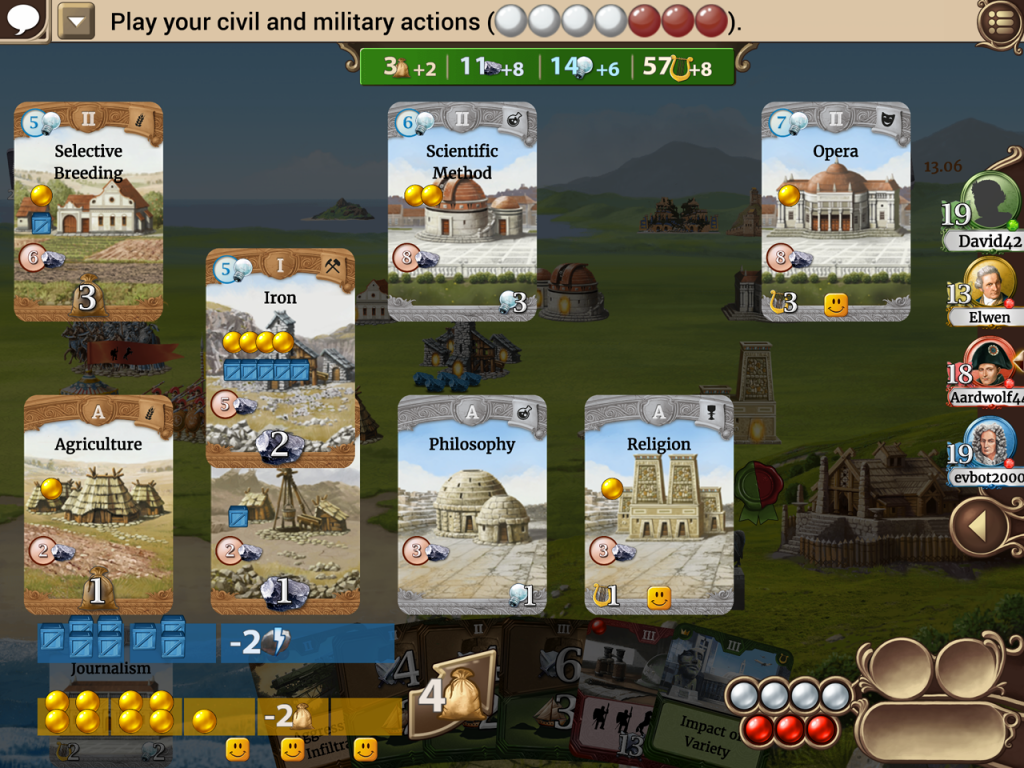 This interface is great. It might look a tad jumbled here, but I couldn’t be happier with how it turned out.

Every effort has been taken to simplify and translate the experience of managing an empire, and it shows. The interface is so simple to learn and understand. I don’t dread playing, I look forward to it.

Furthermore, games are played quickly. One can finish an entire session in roughly 30-45 minutes. This is lengthy for a mobile game, but considering the massive size of Through the Ages, I consider this an achievement. I’ve only played against AI, which can be varying degrees of difficulty, so playing with friends will likely increase game length.

Through the Ages also includes a long list of scenarios and challenges to tackle. Some of these are simple games against one or more AI, but others set the player at a disadvantage, giving opponents a slight leg up. Other challenges create odd variants for the player including 20% decrease in cost for all things in the game, a game where players can only choose a single leader, extra cards in the deck, and more. These variants add a lot of replayability to the game and provide extra avenues to enjoy the many joys of civilization building.

I’ve nearly nothing negative to say here. This game is extremely affordable and succeeds at the massive task of simplifying a complicated game. Go on and give it a go. 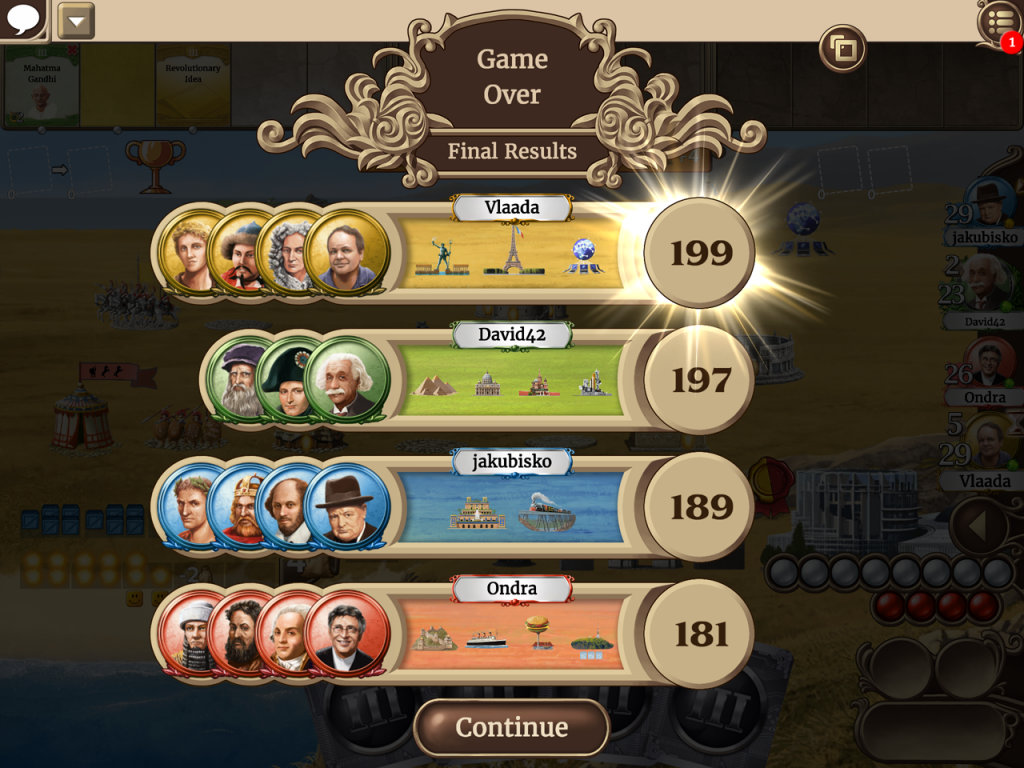 A review key for Through the Ages was provided by CGE Digital.

Through the Ages is digital and it couldn't be better. With a humorous and thorough tutorial, accessible interface, and wise design choices to guide the player, this game is a must-have for most board gamers, and a must-try for those interested in great mobile games.