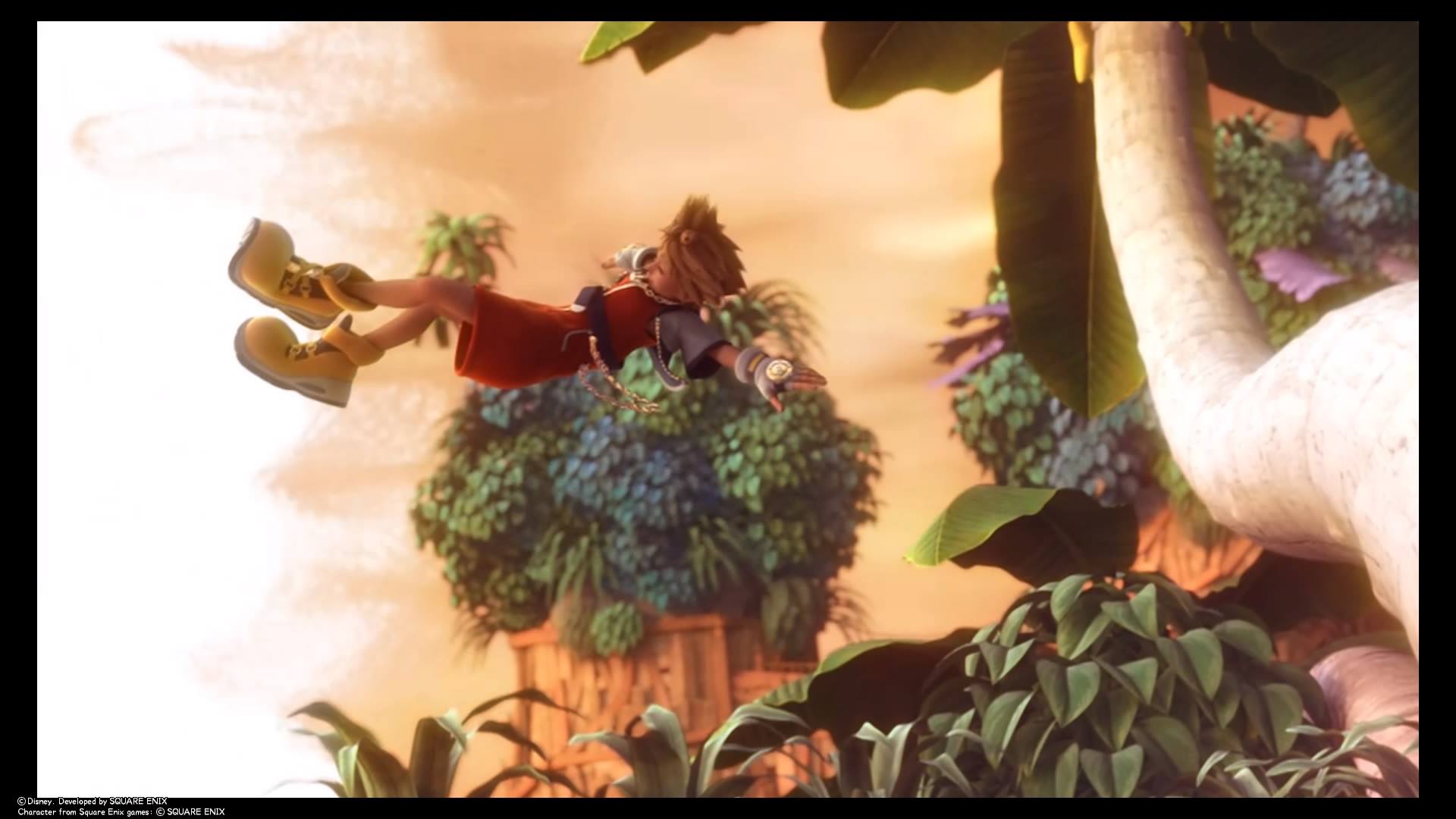 Screenshot from the opening movie of Kingdom Hearts 2. Sora’s been through too much.

Continuing from where I left off in Kingdom Hearts Explained: Part One, we last left the nine friends separated and lost. Sora, Donald, and Goofy are asleep, their memories being repaired by Namine. Kairi has been left alone on Destiny Islands. Riku walks his own path, currently trying to speed up Sora’s awakening. Roxas has been captured, Axel seeks Roxas, and Xion has disappeared. At this point in the story, Aqua still resides in the realm of darkness, waiting to be rescued. Ventus is asleep and Terra is all but lost and forgotten. 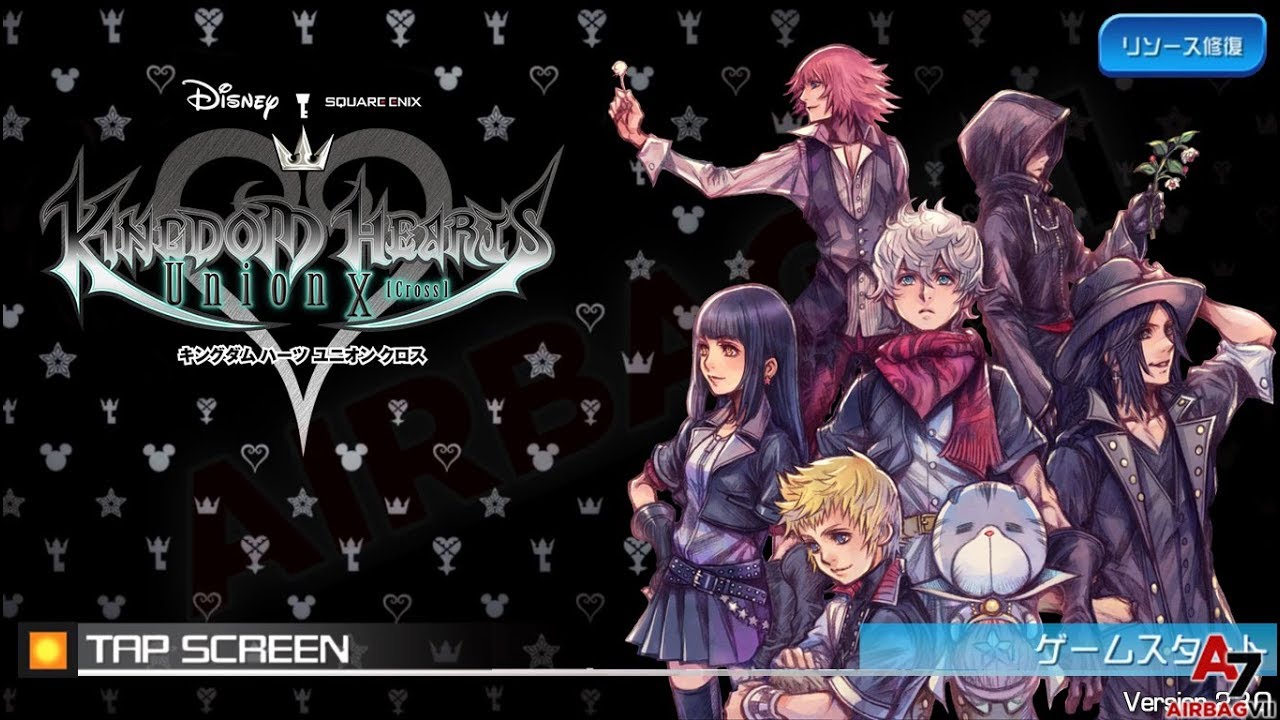 Menu of Kingdom Hearts: Union X mobile game. The boy at the bottom left is Ventus. The stuffed bear in the bottom middle is Chirithy, one of your main allies in the game. He will probably make a small appearance in Kingdom Hearts 3.

Though I did not play it, it is of some significance to bring up the mobile game Kingdom Hearts: Unchained, which now has been renamed as Union X. This game takes place before Birth by Sleep and explains how the great Keyblade War came about. In this war, thousands of keyblade wielders died, all due to a disagreement among the leaders of the town called Daybreak Town. It also shows were Ventus comes from and how exactly the world came to fight over the light. In the first Kingdom Hearts game, Kairi is told a story about how a long time ago, there was light, but many fought over the light, which produced much darkness. But children kept some light in their hearts, caring for and maintaining it. Kingdom Hearts: Union X is that story. I believe that the only major story point to know from this game is that the Keyblade War happened. 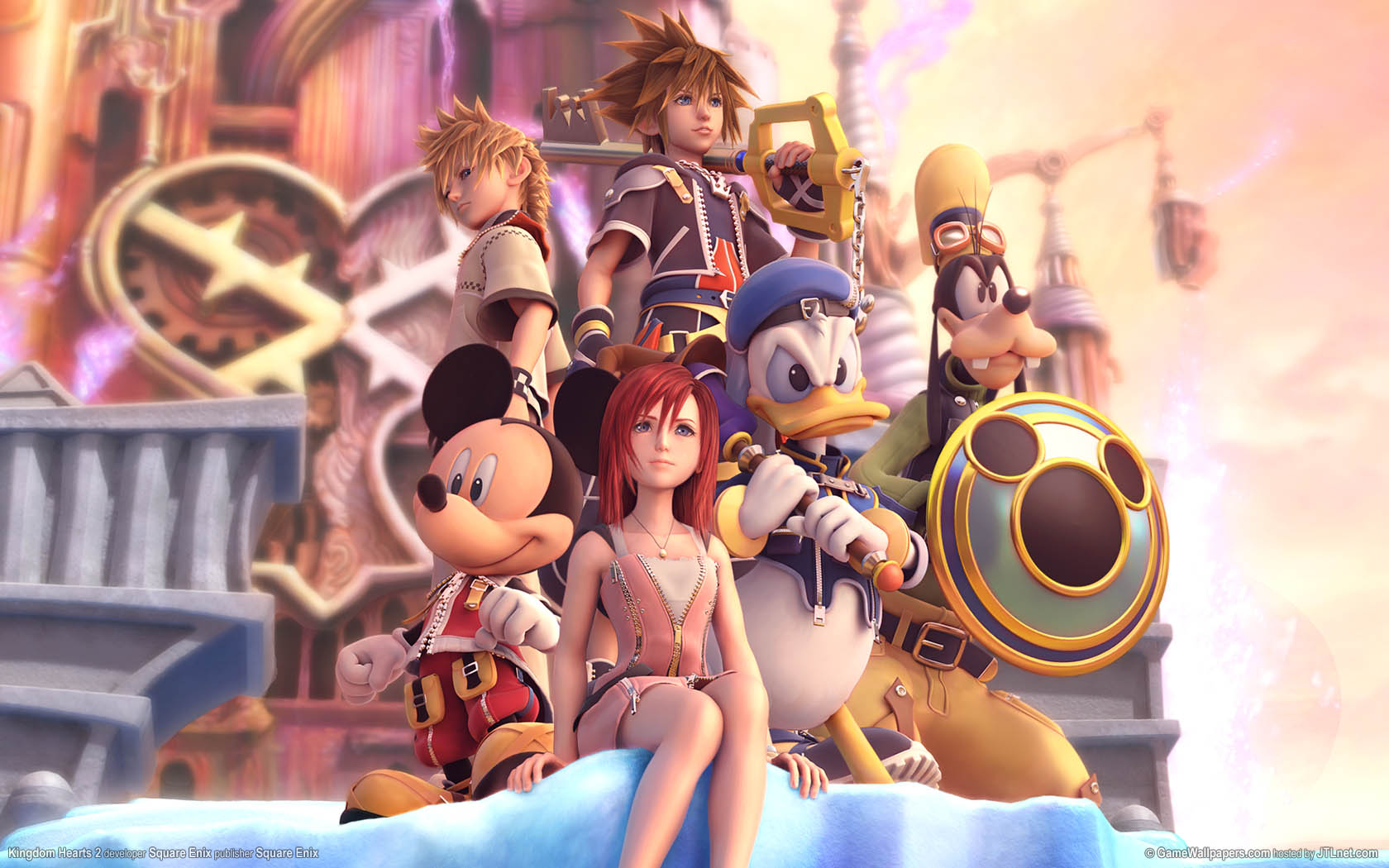 Continuing on from 358/2 Days, Roxas has just been captured by Riku. During the fight with Roxas, Riku yields to the darkness in his heart to be able to win, turning his appearance into Ansem’s, the main villain of the first Kingdom Hearts. Riku ends up looking like Ansem because back in the first game, Riku allowed Ansem to possess him. Ashamed of this, Riku presents himself as Ansem and meets up with DiZ to deliver to him Roxas, who then creates an alternate Twilight Town to keep him hidden from Organization XIII (who will be explained later). He does this to create enough time for Namine to finish rebuilding Sora’s memories and to keep Roxas occupied until he is needed to bring Sora back, since Roxas is Sora is nobody. 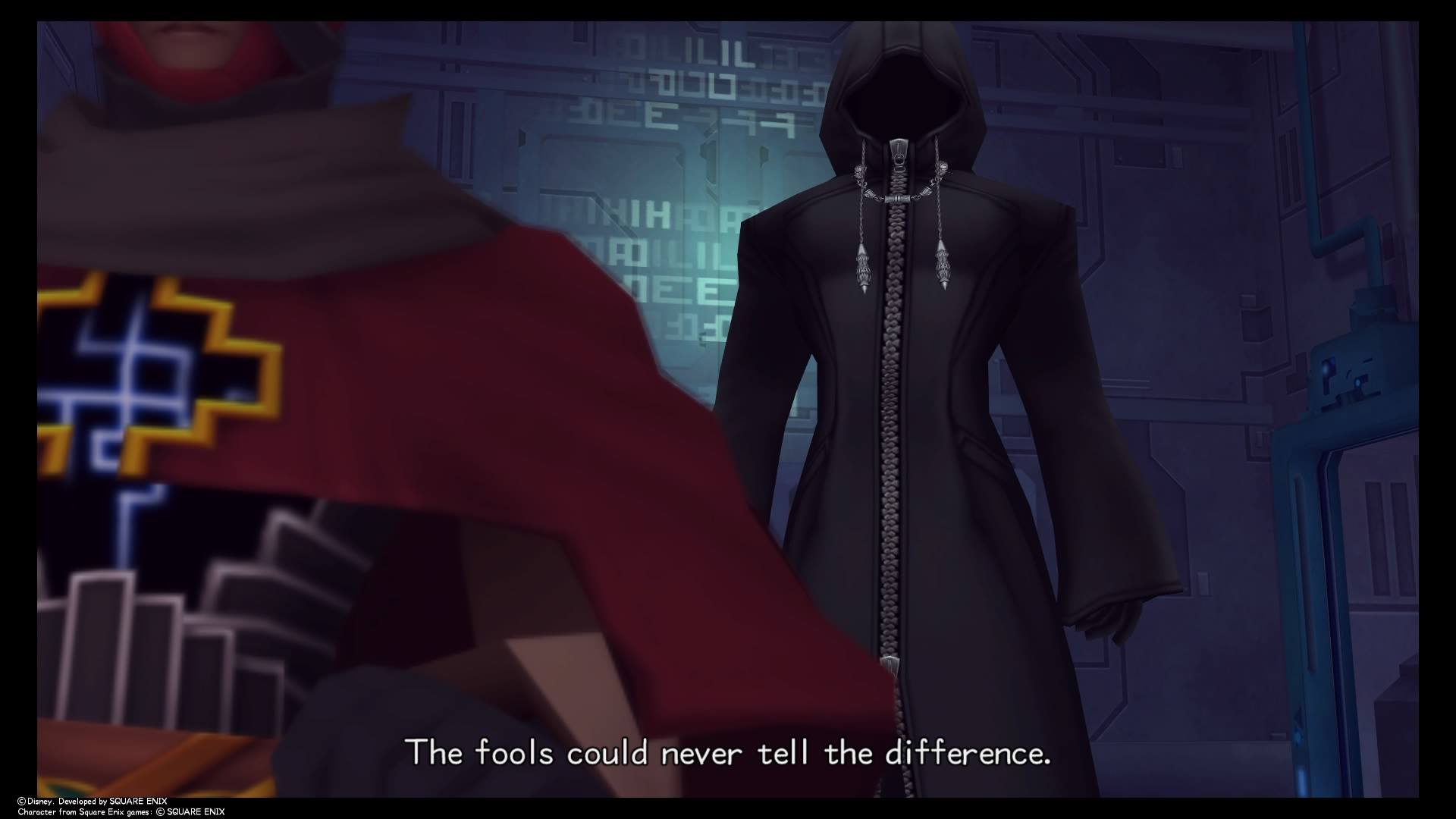 DiZ and Riku is in the back, who has the appearance of Ansem here.

But what is a nobody? According to the lore, when a person with a strong will dies, both a heartless and a nobody are made. A nobody is an empty shell with basically memories keeping it alive. When Sora died by unlocking his heart back in Kingdom Hearts, both were created. Roxas was born and taken almost immediately by Organization XIII, having no memory of his name or why he is able to wield a keyblade.

Sora, Donald, and Goofy’s memories are all rebuilt and Roxas is lured to Sora’s chamber to become one with Sora’s heart, but not before making friends with Hayner, Pence, and Olette of Twilight Town. Even though it was a fake, digitized town, Sora’s heart was able to make connections to theirs through Roxas’ interactions with them. Axel, still working with Organization XIII, attempts to take Roxas back, but is defeated by him. Axel disappears after the battle. Sora awakens and finds out from Yen Sid that the heartless are invading worlds again along with a new enemy: Organization XIII and nobodies. 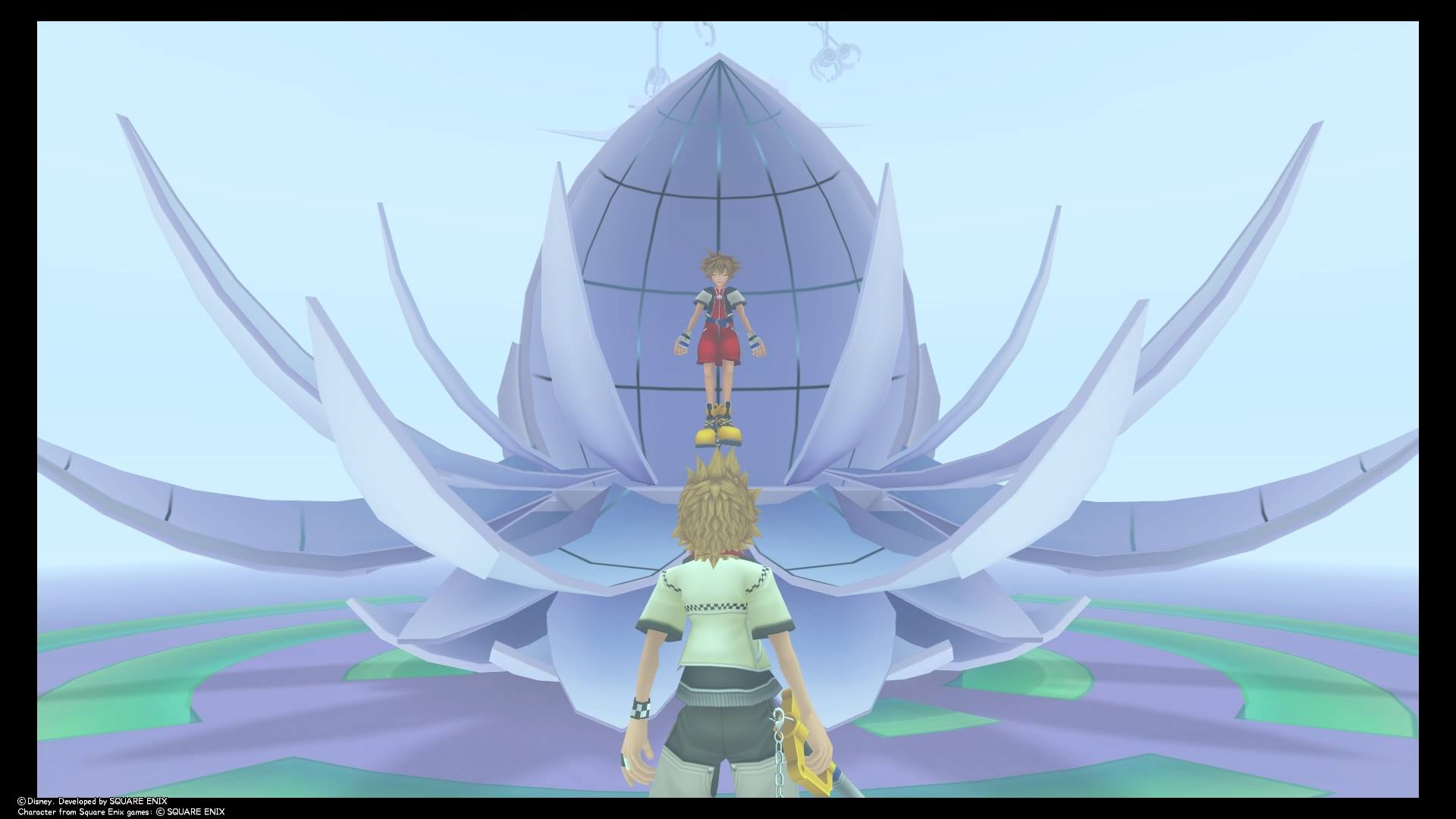 Roxas finds Sora and is unwillingly absorbed by Sora’s heart. Will he return?

The trio must now make their way throughout all of the worlds once again, defeating the heartless hordes and tracking down the Organization. Maleficent makes an inexplicable return with Pete by her side. Still seeking world domination, she unleashes the heartless on all worlds, forcing Sora to clear them out. The first world they come to is Hollow Bastion, where they meet up with Leon, Yuffie, Cid, Aerith, and Merlin again. Eventually, after much world saving, the trio returns to Hollow Bastion and break into the castle, allowing them to find information on what exactly Ansem the Wise was doing so long ago. They discover an entire facility used for experimenting on people’s hearts which was then used to create heartless in very large quantities. 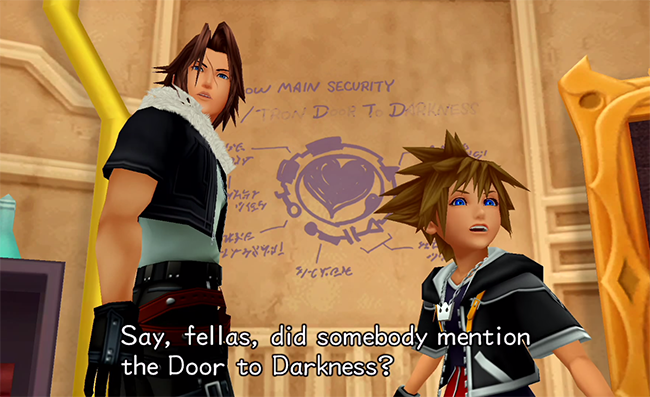 But who is Ansem the Wise? This man was the ruler of Radiant Garden and did many studies on the human heart and its capabilities. In Birth By Sleep, he was the one who took in a white-haired Terra who at that point had been possessed by Xehanort. He takes him in and makes him one of his research assistants. Once inside, Xehanort works with Braig to take down Ansem. But before he succeeds, Ansem becomes privy to what has happened and goes into hiding, becoming DiZ. Once Ansem the Wise disappears, Xehanort then steals the name, calling himself Ansem (which explains why the main villain in Kingdom Hearts calls himself Ansem when he was actually Xehanort). He then decides to make it his number one goal to deter this Xehanort and jostle up Organization XIII. He succeeds, but at the price of his own life (more on that later). 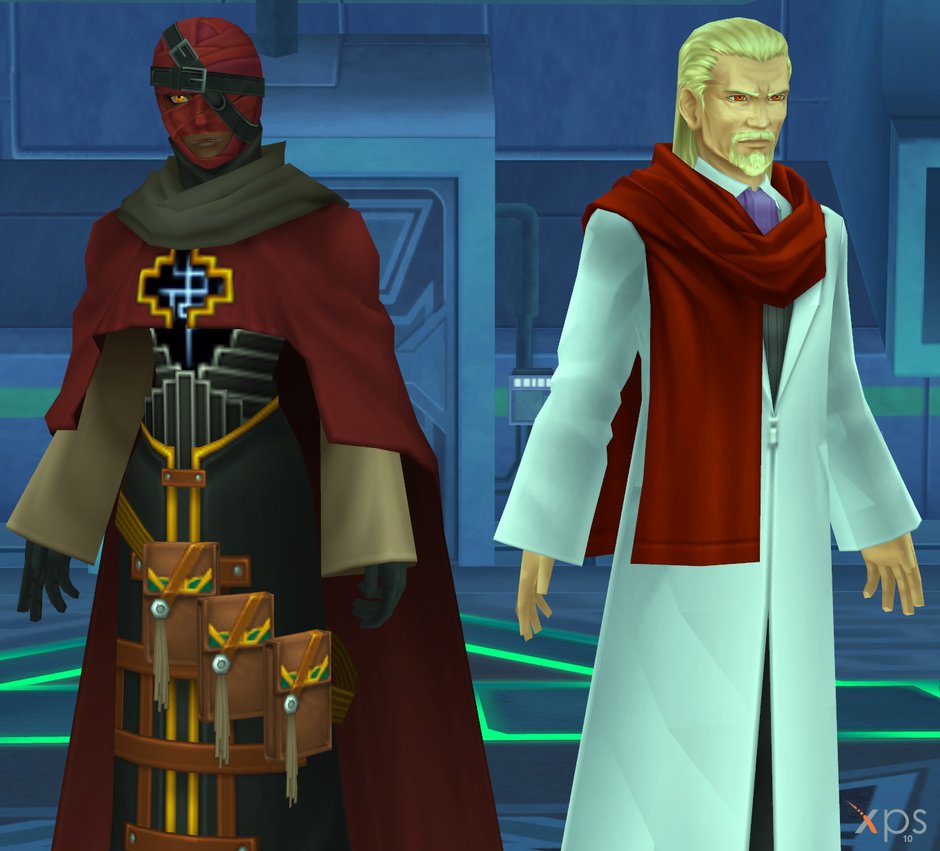 DiZ, aka Ansem the Wise

After Sora and his friends find the facility, Hollow Bastion withstands a major attack from the heartless and the heroic trio aid in defending it. After the battle, Sora finds out from Xemnas, the Organization leader, that they are collecting all of the hearts Sora frees to be able to create an artificial heart of all worlds, which would in turn, make them whole again. This disheartens Sora and he almost falls in battle but is saved by Maleficient, her reason being that she wants him to destroy Organization XIII. 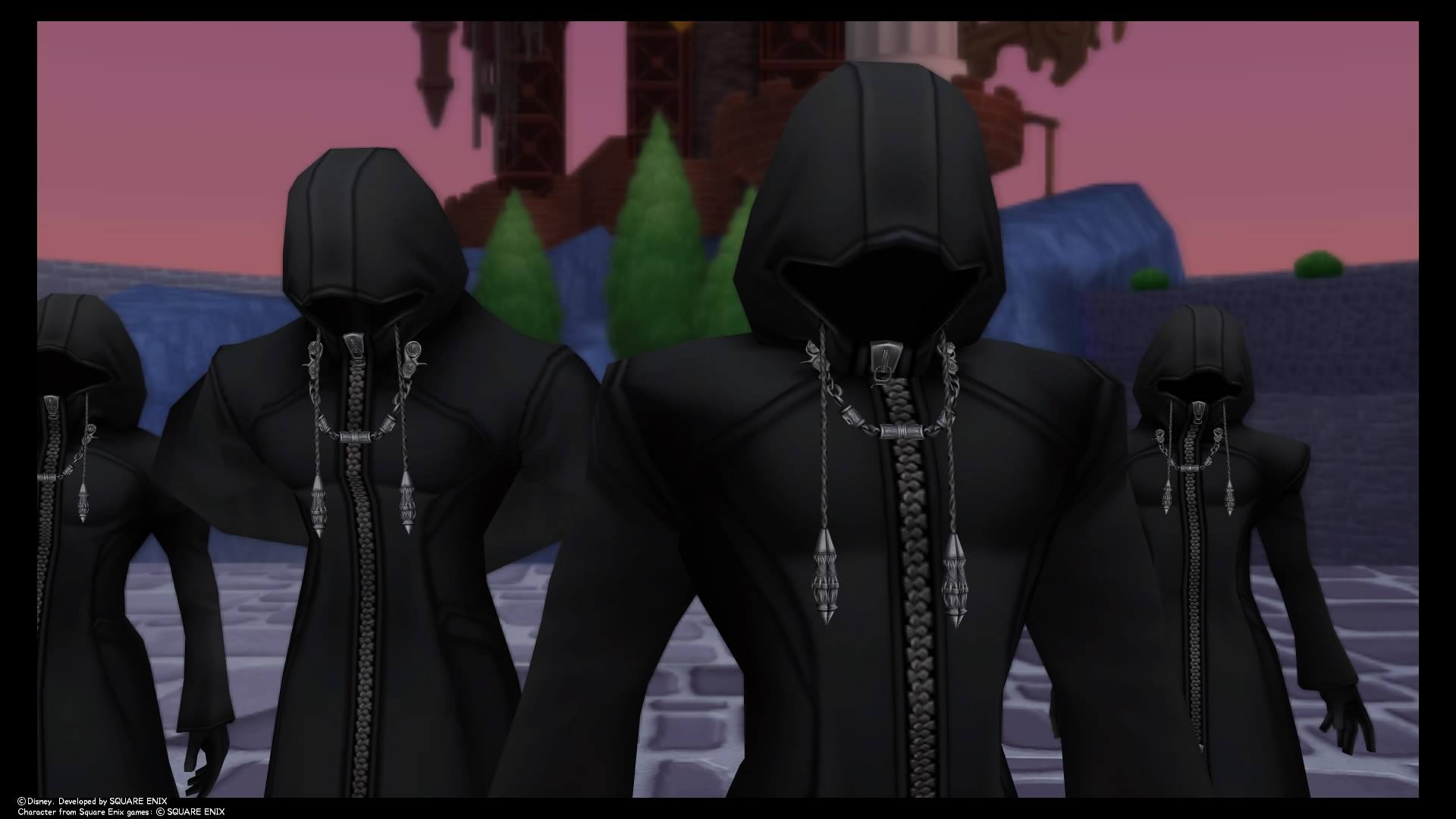 Once again, the trio return to all of the worlds already visited, this time finding Organization members and defeating them, one by one, causing them to disappear. During this time, Axel has his own plan in motion, with only one motivation: to see Roxas and Xion again. He kidnaps Kairi from the Destiny Islands, but she escapes him for a short while and ends up in Twilight Town, where she meets Hayner, Pence, and Olette. Axel finds her once more and kidnaps her again, bringing her to Riku. 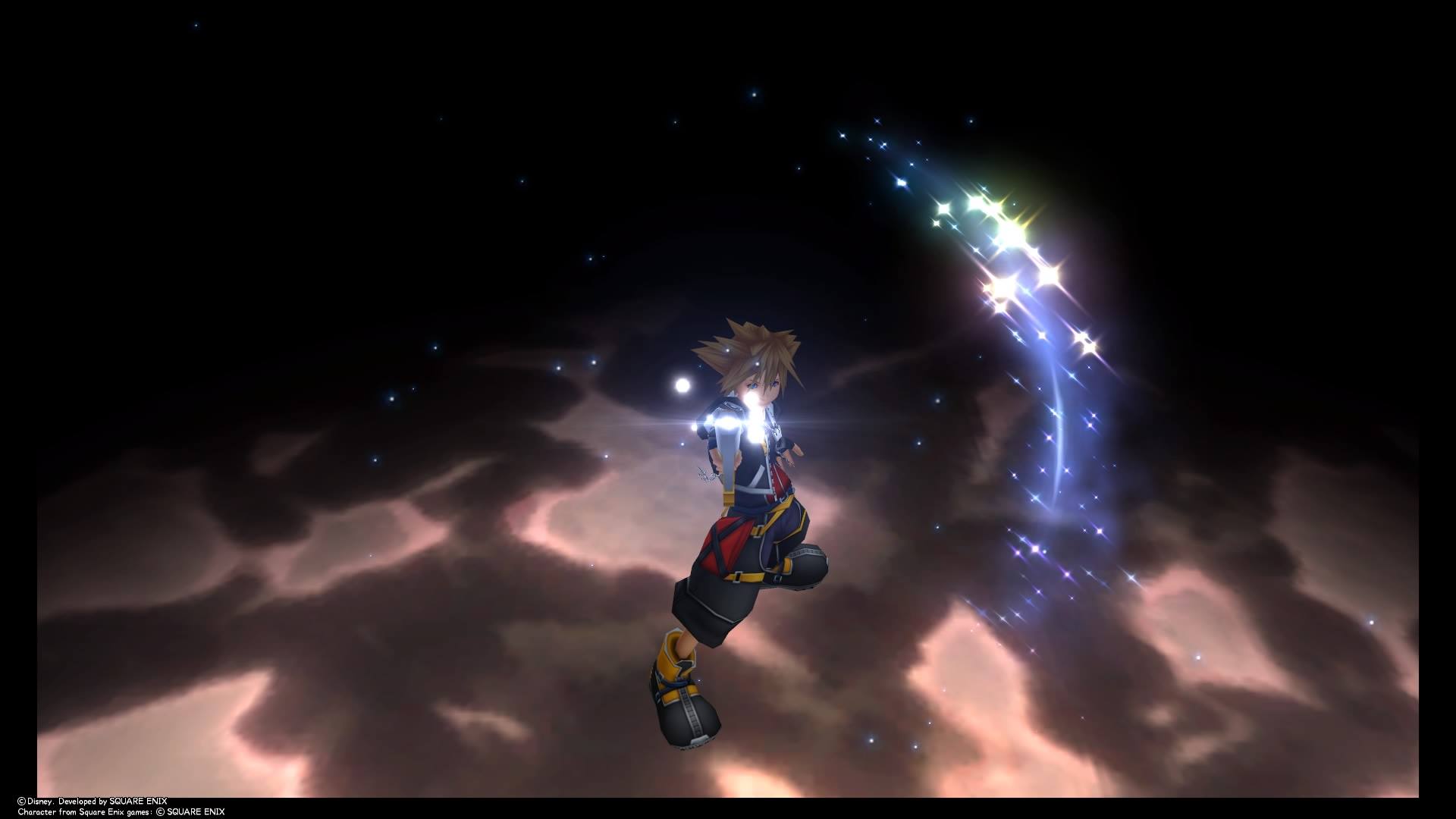 Sora unlocking keyholes to travel to other worlds.

Sora is called back to Twilight Town, where Hayner, Pence, and Olette have come to the conclusion that there is a parallel Twilight Town. They go to the mansion and find a computer there that leads them to the fake copy of the town. Sora and the gang enter and find a strange dark portal that leads them to The World That Never Was, the base of Organization XIII operations. Sora is met with an alarming number of nobody enemies, but is greeted by Axel, who assists him. Overexerting himself, Axel fades away, disappearing from existence, promising to meet Sora in the next life. 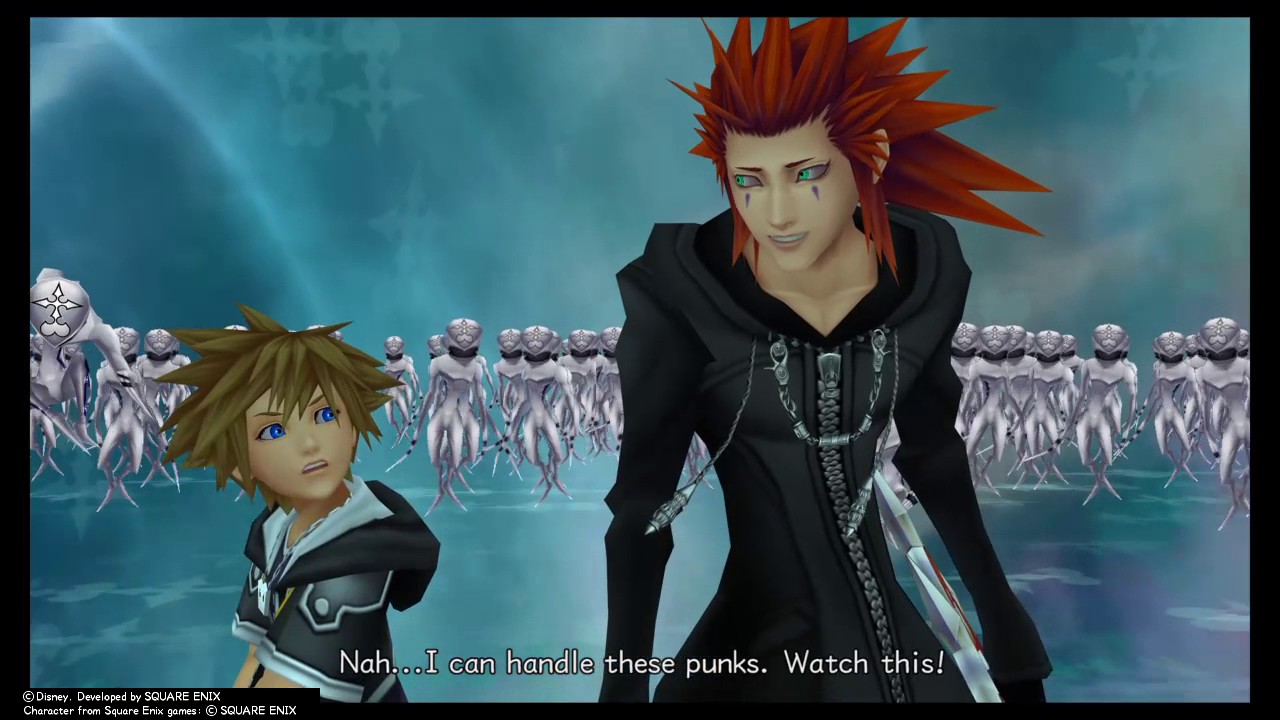 Axel is quite strong…but can he be trusted?

Finding The Castle That Never Was, the trio climb up and defeat three of the four remaining members, with only the leader, Xemnas, remaining. Once Sora gets near the top, he is met with Kairi and what appears to be Ansem. Upon touching Ansem, Sora is able to see that it’s actually Riku. With the artificial Kingdom Hearts almost complete, DiZ finally comes out of the shadows and attempts to convert all hearts collected within the fake Kingdom Hearts into data. Realizing his folly and that hearts cannot be contained, he remains with his machine as it explodes and he dies, but not before apologizing to Roxas and Namine for using them like worthless pets. After the explosion, Riku’s appearance returns, the result of exposure to an intense amount of light.

The trio along with Riku, Kairi, and King Mickey face Xemnas, who is furious at his artificial Kingdom Hearts being destroyed. He puts up a massive fight, but is defeated. He makes an attempt at escape, but Sora and Riku follow him and stop him. They fight and Xemnas is finally defeated, disappearing from existence. But the duo finds themselves somehow stuck in the realm of darkness. They begin to lose heart, but Sora discovers a message in a bottle which happens to be from Kairi who sent it from Destiny Islands at the beginning of the game. This somehow opens a door to light and Sora and Riku inexplicably appear at Destiny Islands, where they meet up with Donald, Goofy, Kairi, and King Mickey.

At the end of the game, and after some time has passed, Sora receives a letter from Mickey explaining all of the happenings of Birth By Sleep, the Keyblade War, and how there are still three people that need his help: Ventus, Aqua, and Terra. Kingdom Hearts 2 ends here. 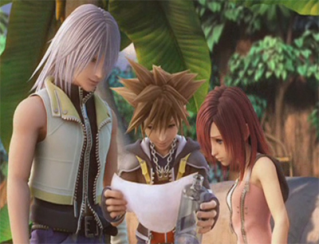 After Square Enix released Kingdom Hearts 2, the game that came out after was Birth By Sleep, which set the stage for the Xehanort saga. Obviously, the story of Xehanort was an afterthought, but the rest of the Kingdom Hearts games were meshed in with it, making it infamous for its confusing timelines. Dream Drop Distance finds Sora and Riku made aware of the events of Birth by Sleep, the Keyblade War, and the main conspirator, Xehanort.