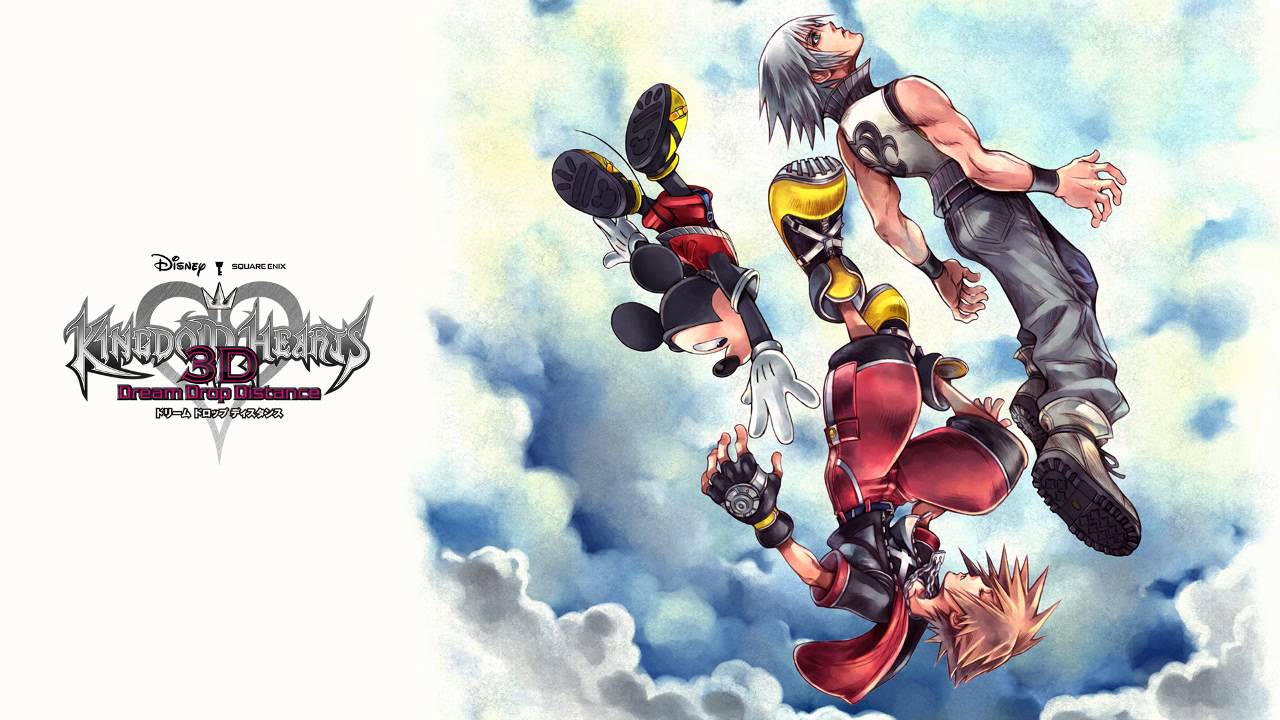 This is symbolic, as this picture shows exactly what happens in the story. Riku finds his light as Sora descends into darkness.

Dream Drop Distance 3D sets the stage for Kingdom Hearts 3 and reveals Xehanort’s main goal, even though much of his goal is still unknown.

We find Sora and Riku in the care of Yen Sid who believes that in order for them to be able to wake Ventus, free Terra and save Aqua from the realm of darkness, they must first become true keyblade masters. Therefore, Yen Sid sets them on his own Mark of Mastery exam, just as Eraqus gave to Aqua and Terra in Birth by Sleep. In order to pass the exam, Sora and Riku must take a dive into their hearts and into the dreams of 7 sleeping worlds, facing whatever opposition they run into along the way. If they come out stronger than before, they will have passed the test and become true masters of the keyblade. 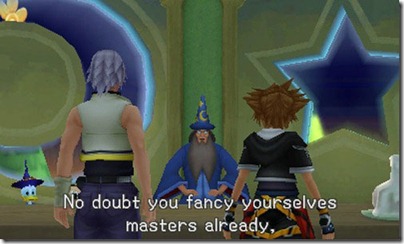 The test begins and Sora and Riku appear as younger versions of themselves on Destiny Islands right before it is lost to darkness in the first Kingdom Hearts game. Together, they enter the dream, but are separated in a large storm. During the storm, Sora sees the original mysterious cloaked figure just before disappearing into darkness. For the rest of the adventure, Sora and Riku visit the same worlds, always at different times, but the actions they take effect each others experience in that world, letting them know that the other is not too distant. 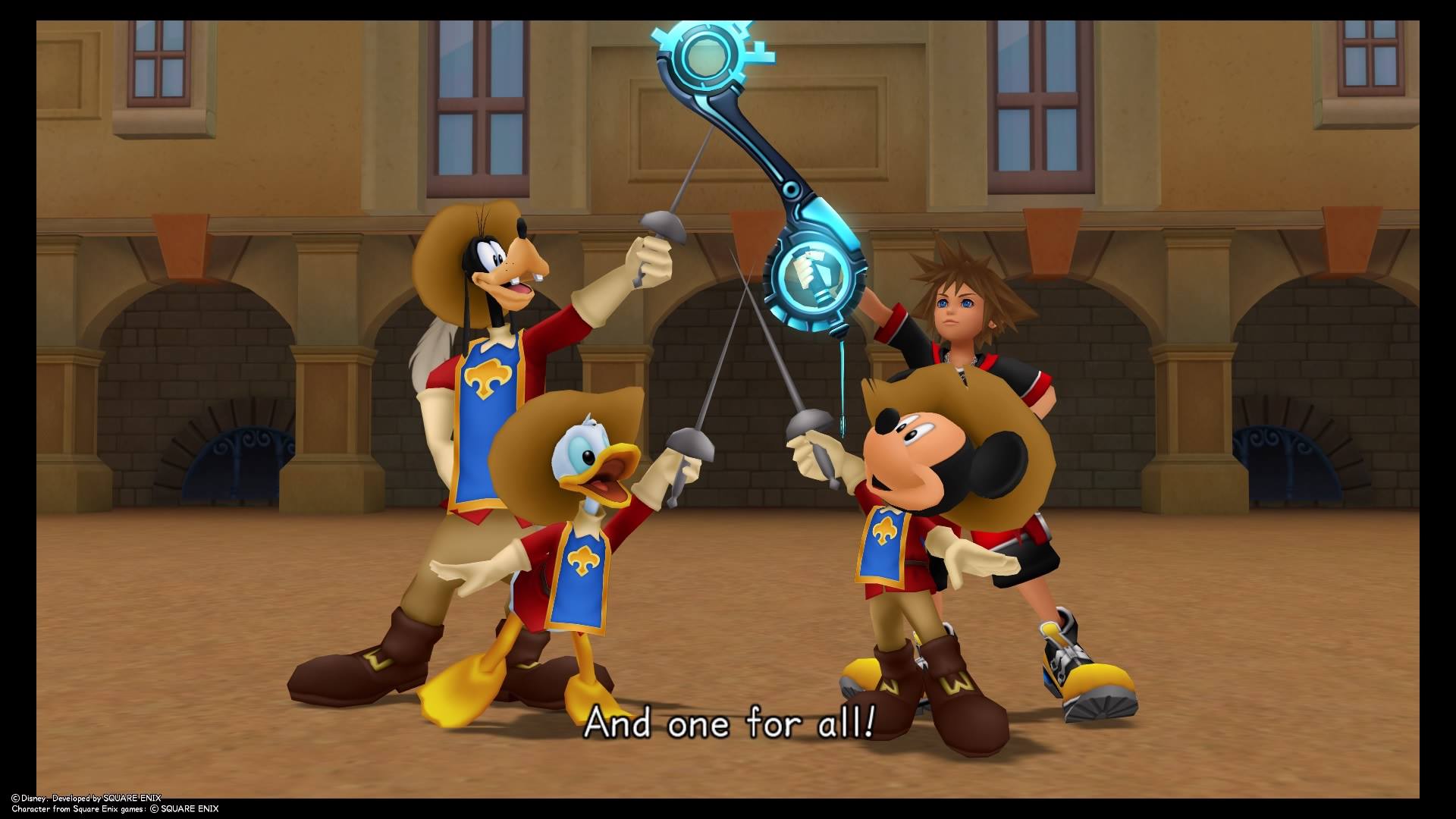 Sora finds the world of the Musketeers, before they ever knew bravery.

As allies, Sora can utilize creatures called Dream Eaters which can be captured and turned good. Throughout his dreams, Sora faces enemy Dream Eaters with allied ones since Donald and Goofy are not along for the ride this time around. As Sora and Riku adventure through the sleeping worlds, working to awaken them from slumber, a young version of Xehanort appears to Riku and Sora. To Sora, he says that he is merely a puppet and to Riku, he continually challenges him, questioning his hold over darkness. During the whole story, Riku gets stronger and stronger in his power over darkness while Sora gets more and more confused with what’s going on. 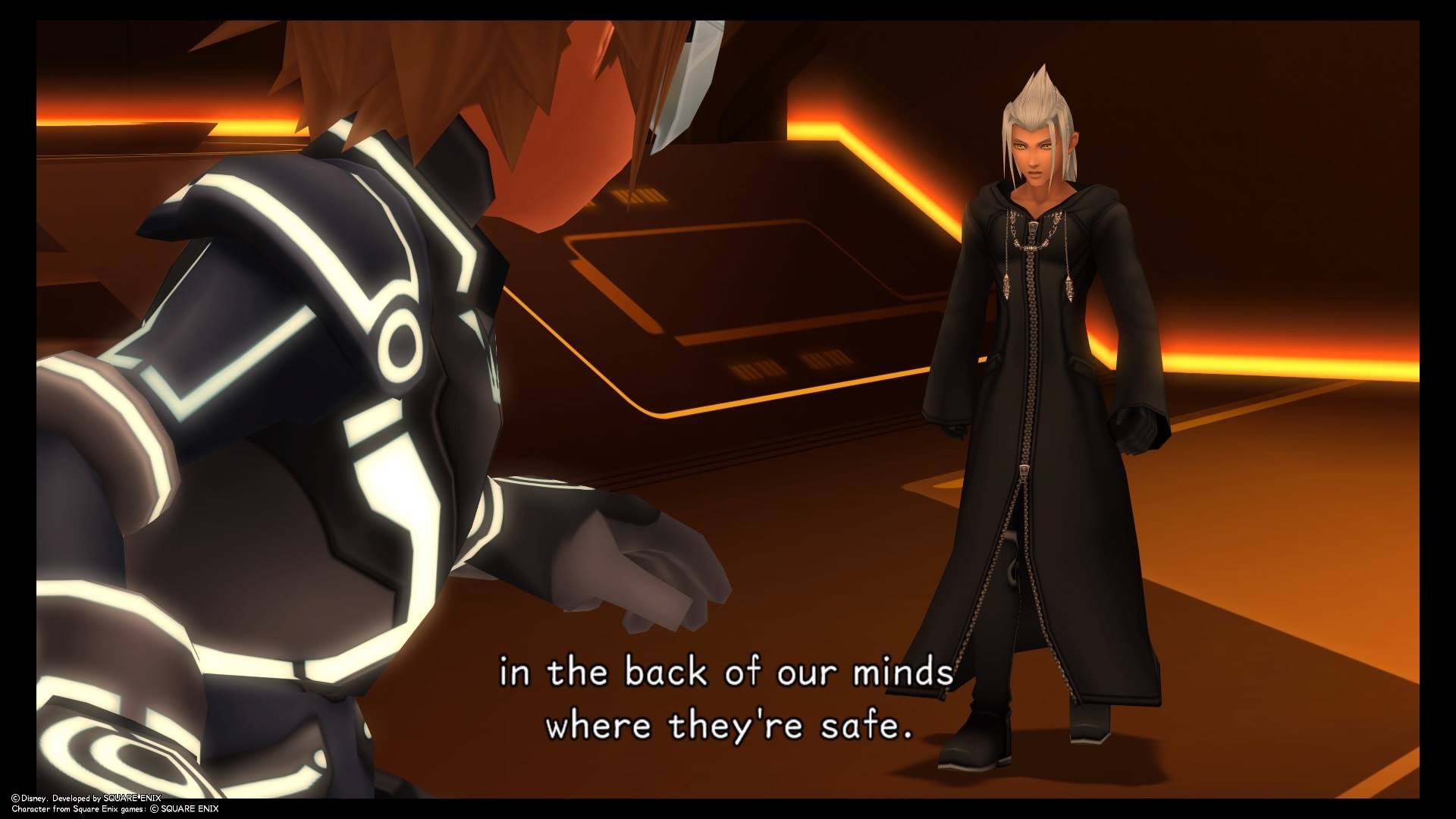 Young Xehanort here to confuse you to no end.

Out of nowhere, we see that Axel, Roxas’ best friend, wakes up no longer a Nobody, but still wearing his black robe. He looks around and sees other members of the Organization waking up in Ansem’s castle in Radiant Garden (aka Hollow Bastion), the main characters missing being Xigbar (Braig), Xehanort and Saix (Isa), Axel’s best friend before losing his heart. It seems that all former members of the Organization have now been restored to their former selves. With conviction, Axel (known as Lea before losing his heart) sets out to find Xehanort and Isa the only way he knows how: using darkness. 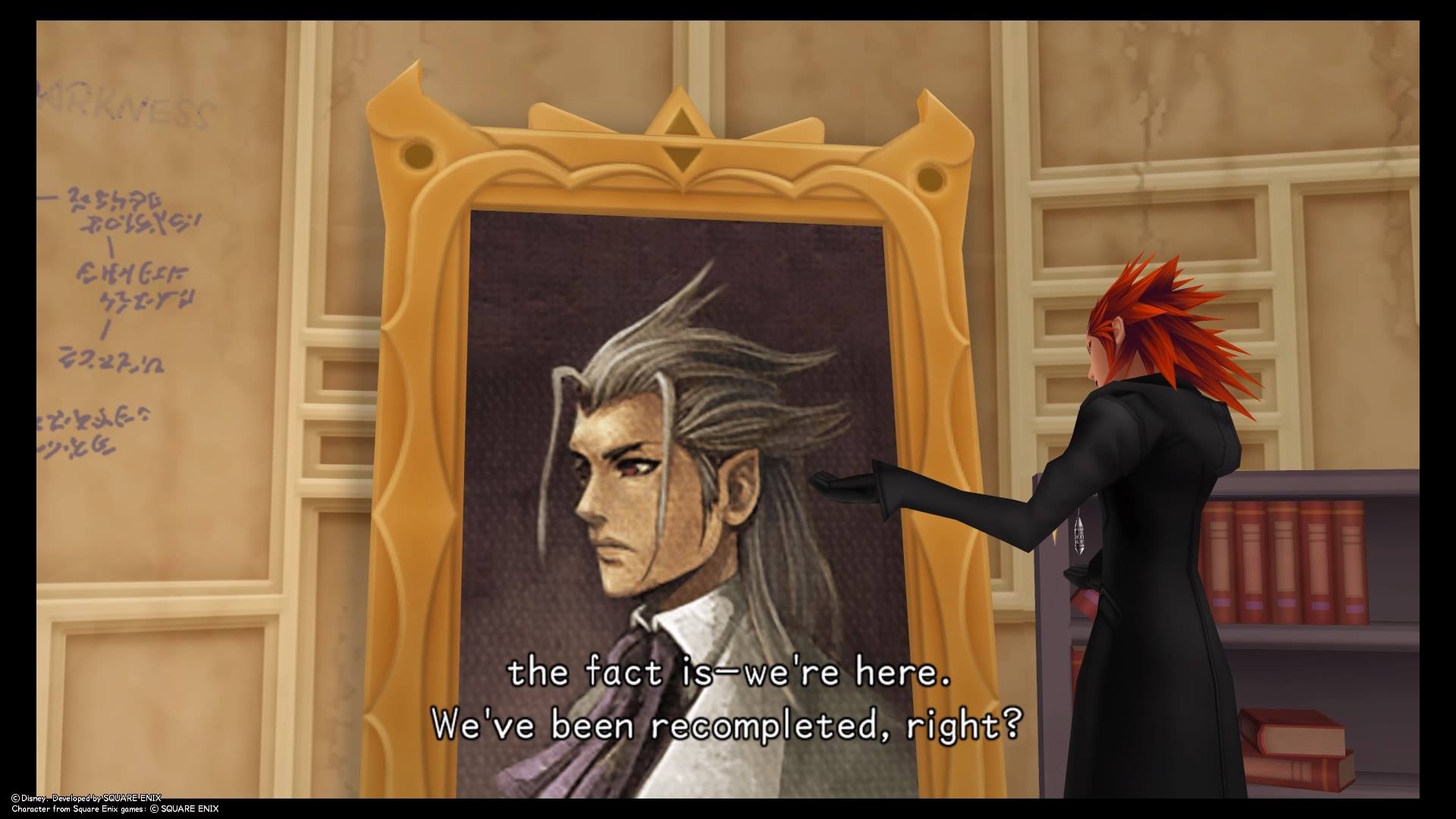 Axel pondering his next course of action.

While Sora and Riku are on their mission, Yen Sid, Mickey, Donald and Goofy all receive a message from Maleficent. In the message, she states that she has captured Minnie and requests Mickey to come at once. Mickey, Donald, and Goofy all head to Disney Castle and learn that Maleficent wants to still control all worlds, with Pete’s help, of course. In the nick of time, Axel drops in and aids in freeing Minnie from being held hostage. Maleficent and Pete leave, vowing to return (and they indeed will in Kingdom Hearts 3). 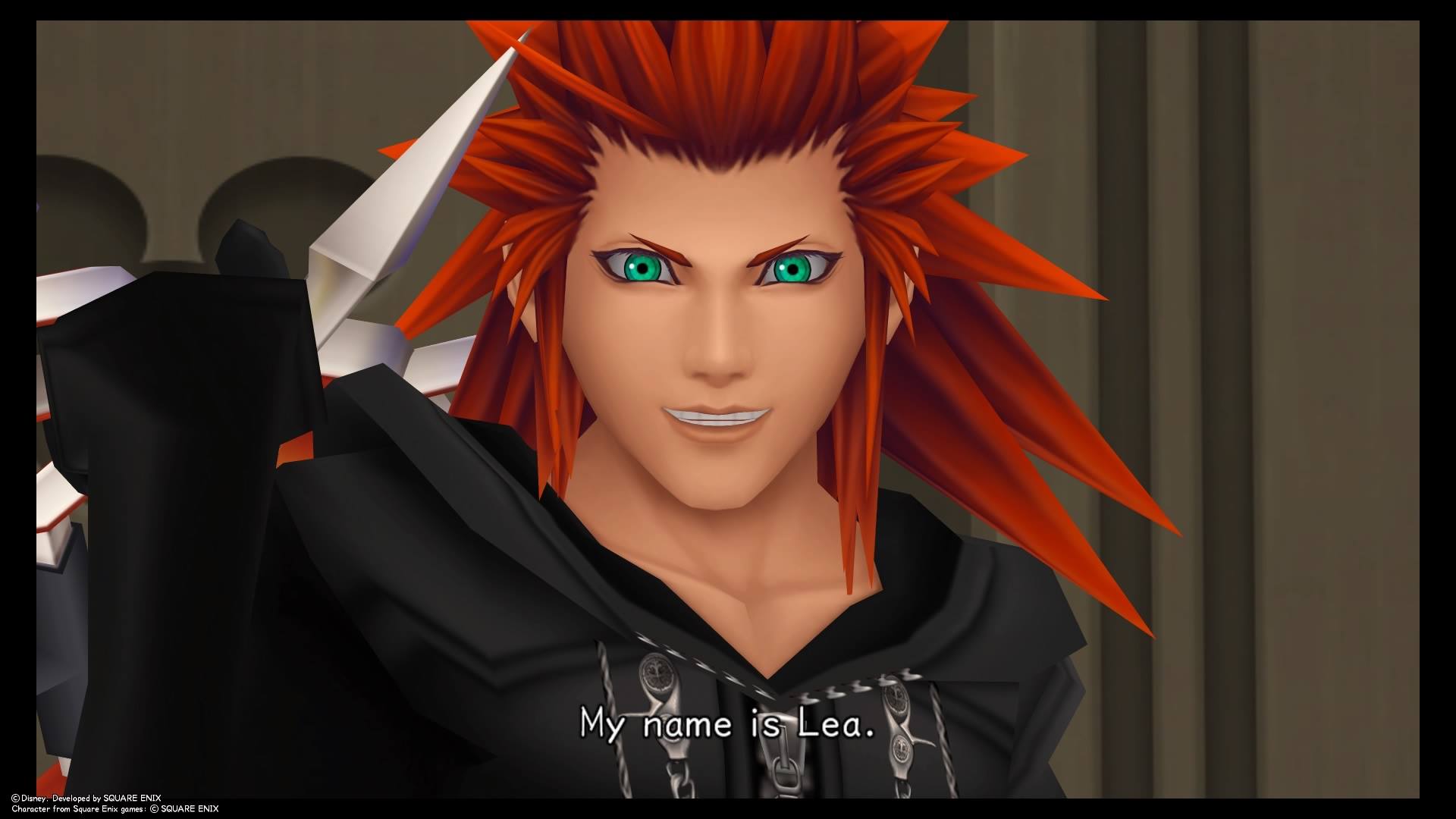 Eventually, Yen Sid learns that Xehanort is indeed up to no good and has actually managed to hijack Sora’s dream, leading him deeper and deeper into darkness. Sora realizes what’s going on, but it’s too late. He is captured by Braig and he falls into darkness. Axel meets up with Yen Sid and offers to help in retrieving Sora and Riku, since they are in grave danger. Axel heads to where he thinks Xehanort will be: The Castle That Never Was. Mickey heads there as well. 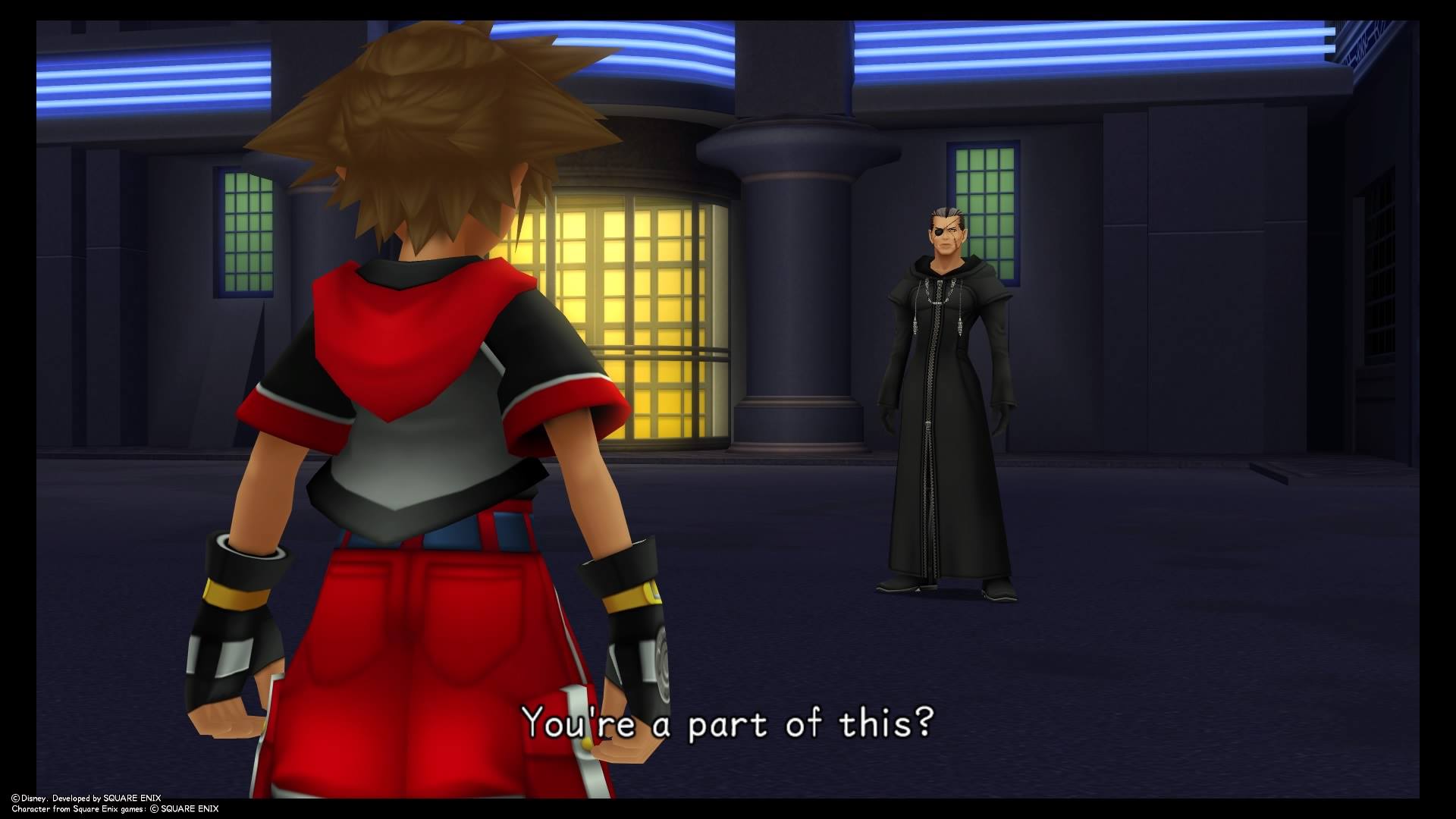 Braig about to capture Sora.

Riku finds a sleeping Sora in the sleeping version of The Castle That Never Was, but is unable to wake him. Instead, Riku wakes up from his dream and ends up in the real version of the castle. He runs to the throne room and finds Sora sitting on one of thirteen thrones. Riku is met by young Xehanort, who explains that all of this was set in motion by Master Xehanort himself, by traveling in time. 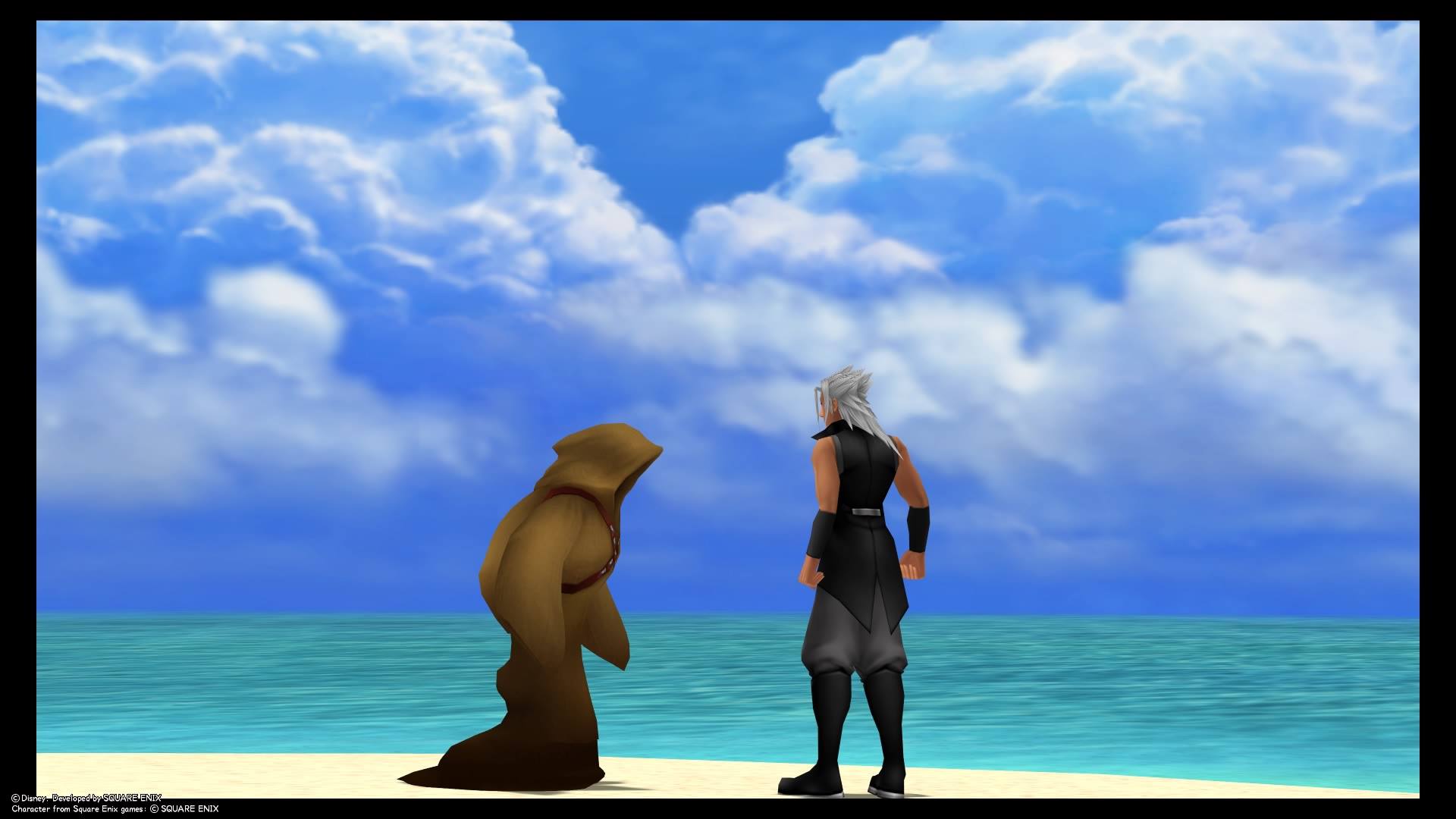 Old, lifeless Xehanort meeting his young self in Destiny Islands.

Time travel!? It turns out, in order for time travel to be possible, a version of you must be present at the desired destination and you must leave your body behind in the current time. Xehanort had managed to spread out versions of himself throughout time, himself once being an inhabitant of Destiny Islands. Yes, Xehanort’s story began on Destiny Islands, but was visited by a future version of himself that was only his heart, the hooded cloaked figure from the first Kingdom Hearts. His future self told him of the ultimate plan to uncover Kingdom Hearts and to reforge the X-blade. Young Xehanort obediently went about accomplishing this mission.

Now, Xehanort had managed to gather 13 vessels again, making Sora the thirteenth, forming the true Organization 13. Soon, he would be able to create the true Kingdom Hearts. But what does he want to do with it? That still remains to be seen in Kingdom Hearts 3.

Refusing to let Xehanort win, Riku and Mickey attempt to retrieve Sora’s body, but are held down by Xemnas and Ansem. In the nick of time, right before Xehanort sends his heart into Sora, Axel shows up and blocks the transfer. This throws everyone off and there’s a bit of a stand still. This buys enough time for the union of the 13 vessels of darkness to expire and all vessels must return to where they were in real time. But before Xehanort disappears, he charges Mickey to forge together 7 wielders of light, saying that it is fated to happen, that there is no changing the course of events. 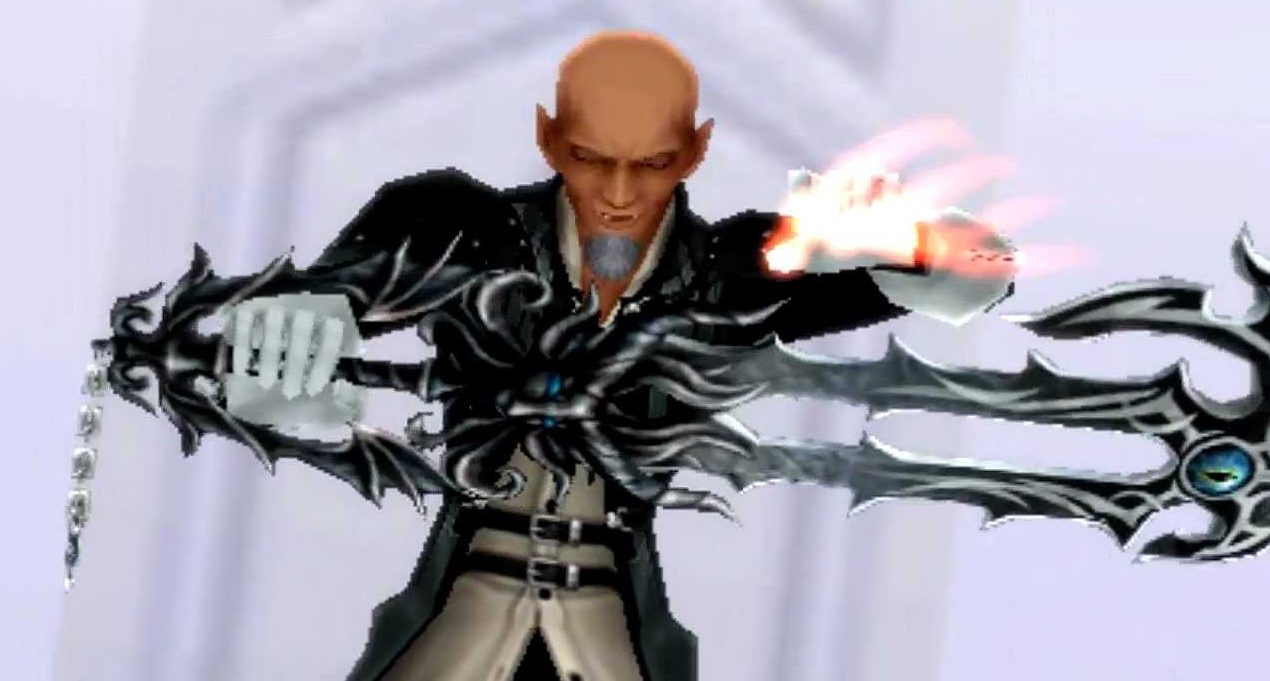 Xehanort about to transfer his heart to Sora.

Returning to Yen Sid, Sora has not woken up and Riku learns that during the entire adventure, Riku and Sora had been navigating Sora’s dreams. Riku himself had become Sora’s Dream Eater, to protect him from darkness. He also tells Riku that he has now gained the power to awaken hearts. After learning this, Riku dives into Sora’s heart to attempt to awaken it. 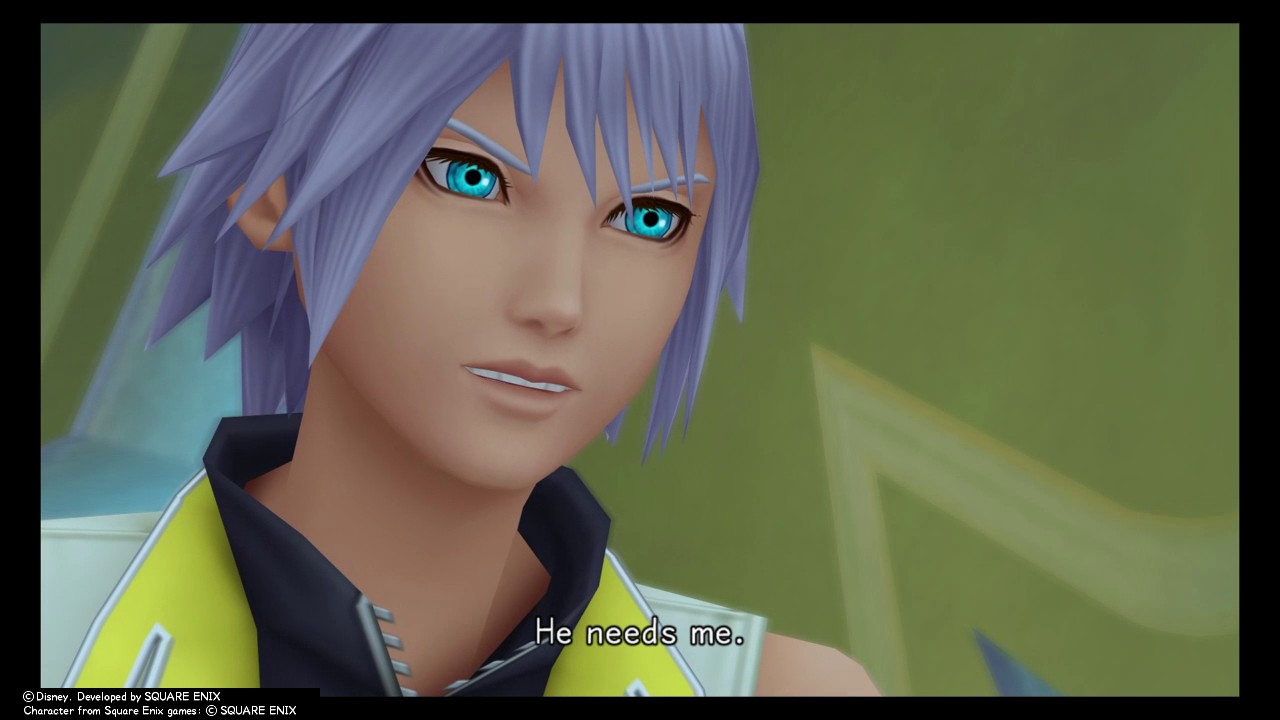 Once inside Sora’s heart, Riku finds Ventus, Roxas, and Xion. Riku also runs into Ansem the Wise (DiZ), who had managed to digitize himself and hide away in Sora’s heart. He tells Riku that any heart Sora holds within his own can be restored to human form. All that Sora has to do is follow where his heart takes him.

With that, Sora wakes up. But since Riku risked himself more than Sora, Yen Sid deems Riku worthy and names him a true keyblade master. Axel makes a sly comment and claims that he will eventually be able to wield a keyblade. Everyone is shocked by this claim, but Axel nonchalantly materializes a keyblade.

With Xehanort missing one “seeker of darkness” to complete his 13, who are the seven seekers of light? During Xehanort’s explanation, Mickey counted: Sora, Riku, himself, Aqua, Terra, and Ventus. But since Terra has been all but lost, looks like two will be needed to complete the 7. At the very end of Dream Drop Distance, Kairi is brought in to Yen Sid. Since she is able to wield a keyblade, as seen in Kingdom Hearts 2, he decides that she will be trained to use a keyblade. Does this mean Axel is the seventh wielder of light? 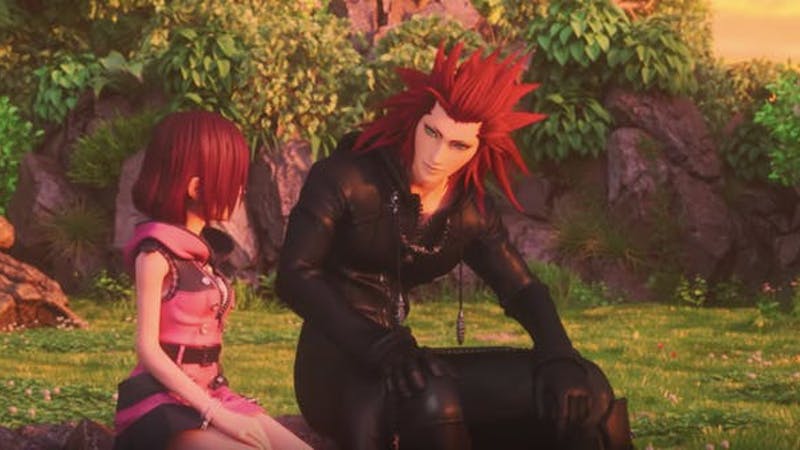 The stage is set. Xehanort seeks for one more seeker of darkness. Maleficent and Pete continue to pursue domination over all worlds. Sora has been stripped of all of his power since nearly losing his heart to darkness. To remedy this, Yen Sid sends Sora out to find new power. It’s not necessary to play, but if you play through A Fragmentary Passage, it shows that Sora heads out to Olympus Coliseum. Perhaps he can find new power there? Will light prevail? Or will Xehanort get what he wants? Many questions remain, all of which will hopefully be answered in Kingdom Hearts 3. Look for my review in the coming weeks!