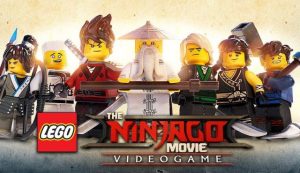 Ever since 2005 with the release of LEGO Star Wars: The Video Game, we have witnessed the release of multiple LEGO titles—sometimes more than one per year. These games have always been a pleasure of mine since they are based on beloved IPs such as Batman and Star Wars, and it is great seeing the games evolve into the hits they are today. The LEGO Ninjago Movie Video Game is different; it is based a game based on a movie based on an original LEGO property. With the release of another entry in the LEGO Movie franchise, it is time for another Lego game as well.

Violence: Like all LEGO games, there are enemies to defeat throughout. All of this violence is portrayed in a slapstick manner. If you have played a LEGO game or seen the recent LEGO Ninjago Movie, there is nothing that you haven’t seen before.

Language/Crude Humor: Lord Garmaddon says he wants to have some “four letter words” with a goat after they crash. There isn’t anything of note to say about any crude humor.

Spiritual Themes: There are some spiritual themes in the Ninjago world, but are less explored in the game than the movie. 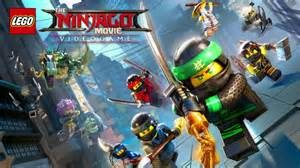 Positive Themes: The six ninjas and their master defend the city from Lord Garmaddon and his minions. They do what is right and never ask for anything in return. Lloyd, one of the ninjas and Garmaddon’s son, seeks to be recognized by his father and through the game (more so in the movie) develop a real father son relationship.

LEGO Ninjago is a property I am admittedly not very familiar with. Going into this game for review, I thought this was going to be a hurdle. I wouldn’t be familiar with the characters and established backstories from the show and previous games. Thankfully, this game and the movie from which it is based are not tied down by that. This makes the game much more enjoyable to play. Cutscenes are both clips from the movie and clips animated by the developers. These scenes are fun to watch, but there is inconsistency in the voice acting between the two. They seem to have two different sets of actors playing the characters. 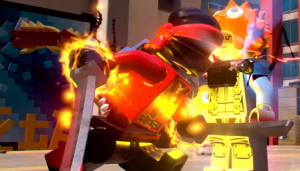 Gameplay is for the most part the same as every other LEGO game. Different characters have different abilities that are needed to solve puzzles. You can go back and play story levels as new characters to unlock new outfits and collect studs to become a “True Ninja.” As you defeat enemies, you build a combo meter that will multiply how much the studs you collect are worth. There is something new though. There are different combos available for use to defeat enemies during combat. Every enemy can be defeated by all the combat combos, however, if you beat a few in a row with the same move, they will block that move from damaging them. This will make you to think about how to approach each combat scenario and not let you resort to just smashing the attack button over and over.

The story is a copy of the plot from the movie the game is based upon. The gameplay focuses on what some characters are doing off-screen and what happens in between scenes. These sections help tell you more about the world of NINJAGO and the mythology surrounding it. There is more dialogue between the characters that helps flesh out their relationships and how they feel about each other. 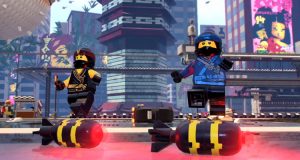 Multiplayer and co-op have been major features in all home console release versions of LEGO games. The same can be said here. Co-op is as fun and sometimes as hectic as all the other installments in the franchise. There is also a feature in this game called Battle Arenas, which was introduced in LEGO Dimensions. This is a four player local competitive mode with different mini-games such as Samurai Showdown, where you need to take your opponents’ flags to score points; Mystic Bounty, where you need to collect orbs to win; and Ultimate Ultimate Weapon, which is essentially keep away. Each of these can be played on three different maps based on locations from the movie. Each round lasts 5 minutes. These mini-games can be fun with friends or with bots when you don’t have four people playing. Another mode in the Lego Ninjago is Races. This is a mode where you follow predetermined courses throughout the world in the fastest time. Dojos \located throughout the world as well, and here, you do your best to get a high score against a boss character after a few waves of enemies. Each location in the world has its own races, free play levels, and dojos.

The game world feels alive with different opportunities to explore each nook and cranny. There is always something to do everywhere.  Collectibles are around every corner and range from more character pieces to gold bricks  These gold bricks can then be used to unlock more of the world for you to discover. Character pieces can be used to make your own LEGO person to play with in the world or in multiplayer. It is a shame that the load times between each of the locations feels longer than it should be on a current generation machine, can last what seems to be a lifetime compared to previous LEGO titles. 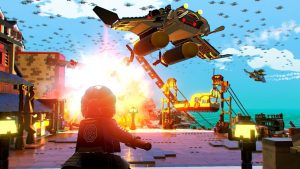 The LEGO Ninjago Movie Video Game is a blast to play. The gameplay is exactly what you would expect from a LEGO game; even if it does not have many new features or ideas of its own to bring to the table. If you want to have fun with your child or feel a need to go collect everything in sight, this is the game for you.

If you want to play a game with your child or just want to collect a lot of stuff, The Lego Ninjago Movie Video Game is right for you.