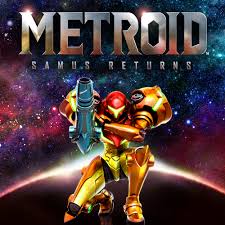 How do you introduce a franchise like Metroid? It is a genuine question, dear reader. Many of you will have clicked the link already aware of the franchise, its turbulent few years and its frustratingly lengthy waits between games. But for some lucky people, the franchise is known simply by name. In fact, for some people, this will be their first view of a main title Metroid game, the last outing being Other M on the Wii.

The series has had a number of changes to design and format, the most popular being the Prime series which developed not only the lore surrounding Samus Aran, but also proved the ability for Nintendo to produce a quality first-person shooter—er, sorry, “adventure” game. Prime is now the series in which other Metroid games are judged, much to Other M’s downfall. Since then, Nintendo has attempted to rekindle interest in the franchise with Federation Force, but this poorly-received spinoff simply bolstered the fans’ cries for a true Metroid title to be released. A few months later, Nintendo revealed two titles in the pipeline that would help restore faith in the franchise’s future. The announcement of an upcoming Metroid Prime 4, and a project developed alongside Spanish company Mercury Steam, the first Western development studio behind a main series title. This title would be Metroid: Samus Returns.

The game consists of using lasers, missiles and other weapons to kill off alien creatures. There are hints to genocide within the game as the main mission is to eradicate all metroids. Creatures that are killed disappear from the screen and there are some dead creatures found throughout the level .

The positive content takes the form of Samus as a positive female role and a positive hero role model in battling to protect humanity and prevent the metroids from being a tool of the Space Pirates.

The game revolves around killing various creatures in order to eradicate a species that threatens humanity.

Less of a remake and more a reimagining of the original Game Boy title, Metroid 2 Return of Samus. Mercury steam have worked painstakingly to combine both their own spin on the franchise while keeping true to the story and feel of a 2D Metroid title. Clearly, they have worked under close watch from Nintendo but at the same time, they have attempted to show what they can bring to portable titles in the Metroid universe.

The story of the game is relatively unchanged. Samas Aran has been consigned to eradicate the metroids from their home planet. This is to prevent the harvesting and exploitation of them by the Space Pirates, to the detriment of all humanity. Samus, undeterred by the thought of committing genocide, travels to planet SR388. The premise of Metroid: Samus Returns hasn’t changed much from the original Game Boy release of Metroid II: Return of Samus: Explore the cavernous expanse of SR388 and eliminate all the metroids in your path. Along the way, you will collect powerups and items to enhance Samus’ armor and arsenal as well as gain abilities to help you progress. The level design has changed slightly in the layout and positioning of items, making sure you can’t simply run on muscle memory. There is no hint as to what item will be unlocked at any point. Following a secret passage could lead to a new suit augmentation, an missile upgrade, or one of the new Aeion abillities such as the scan pulse. However, once you collect a certain item, it becomes clear that a whole new part of the map is open up to you, making what is essentially a linear game into an exploratory one. 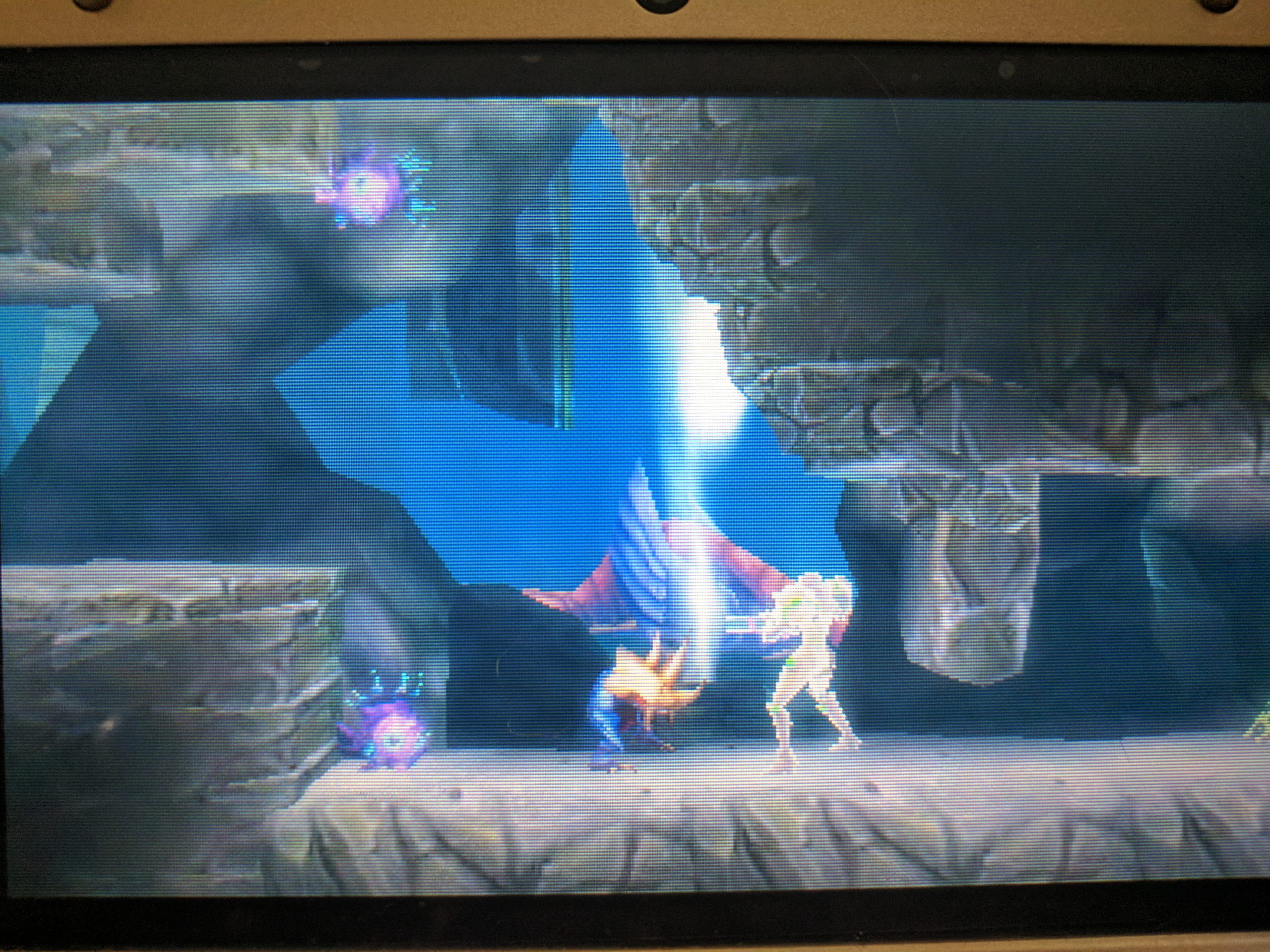 The controls utilize the layout of the 3DS fully, this can be both a blessing and a curse. The circle pad compliments the game well, particularly when trying to land difficult jumps. However, the D-pad is non-existent in a directional capacity. Instead, it is used to switch between Aeion abilities. I can’t help but feel that sometimes I wanted to use the D-pad for movement, and having the option to use both might have improved the experience. However, it isn’t debilitating, and I quickly adapted. The use of the free aim controls, enabling Samus to aim in a 360-degree arc while stationary, aids a new dimension to the gameplay and is particularly handy when taking down metroids. The only issue with the controls is their complexity. Having to switch between touch screen and buttons in addition holding down certain buttons or toggling with a shoulder button to differentiate between abilities in conjunction with another button makes quick scrolling during combat a skill that requires time to master, and can be quite a tiring experience for inexperienced thumbs. 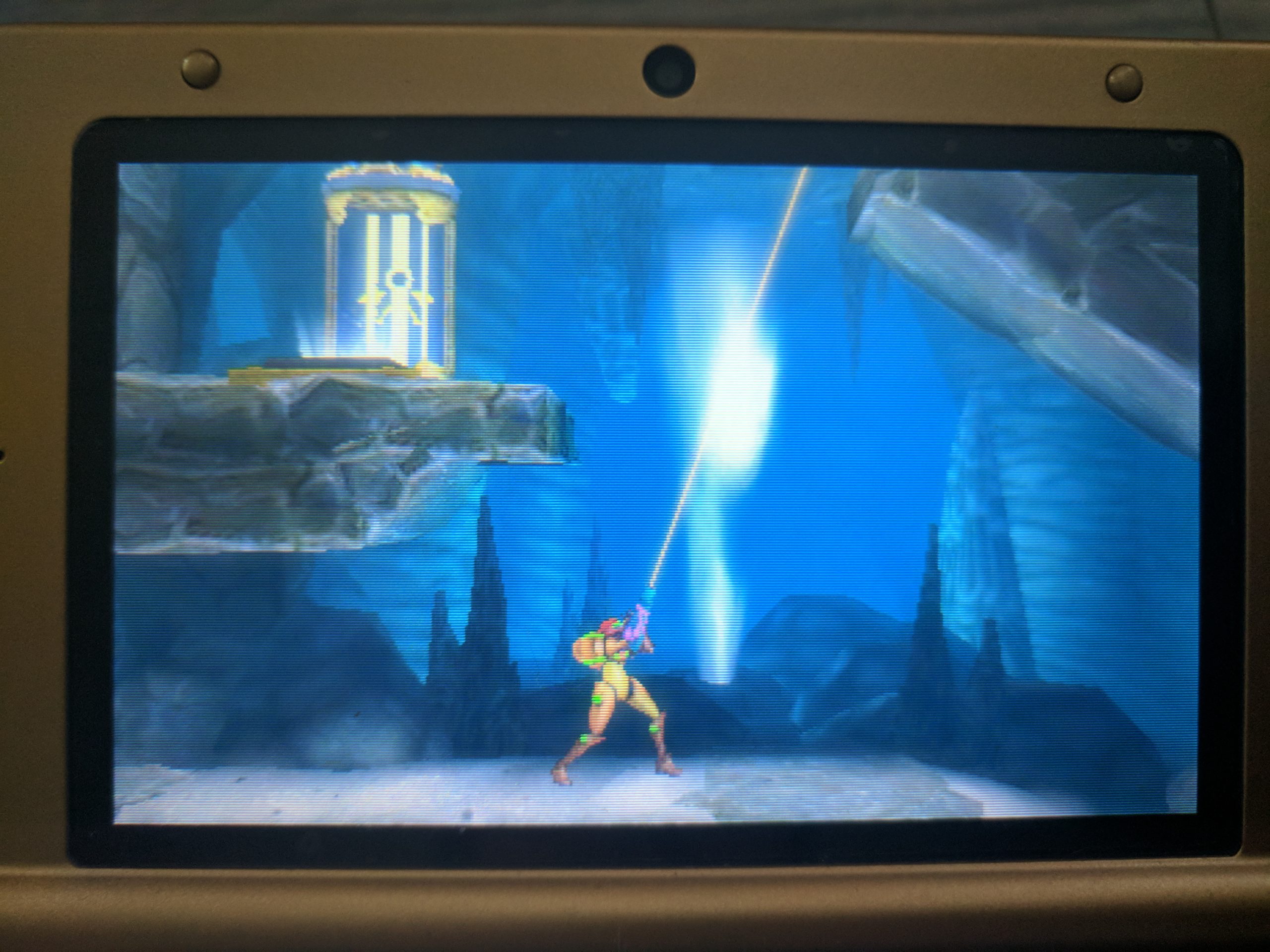 The enemies you encounter are similar throughout the game. all will charge at you if they notice you within a certain distance for example. A number of them acquire slight upgrades over time, but all can be dealt with using the first new feature, the melee counter. By pressing the X button when an enemy approaches, Samus will swing her cannon into the face of oncoming enemies, stunning them and opening them up for further attacks. This comes in handy especially while battling metroids as they, like common enemies, have the same type of attack pattern: swing, perform elemental attack, charge. Upon being charged, Samus can use her counter to relay a barrage of missiles at the metroid to render it dead much quicker.

This also works with the main level bosses, although these play out with more cinematic effect. The counter melee, while useful, becomes tedious and overused at times. Had this only been available for metroid and boss fights, then the feature wouldn’t have felt so overworn. Another problem is that one of the best aspects of 2D Metroid games is the ability to “run and gun” which is now more difficult because, in fact, the best course of action is usually to slowly skulk behind enemies, counter their attack, and continue moving. 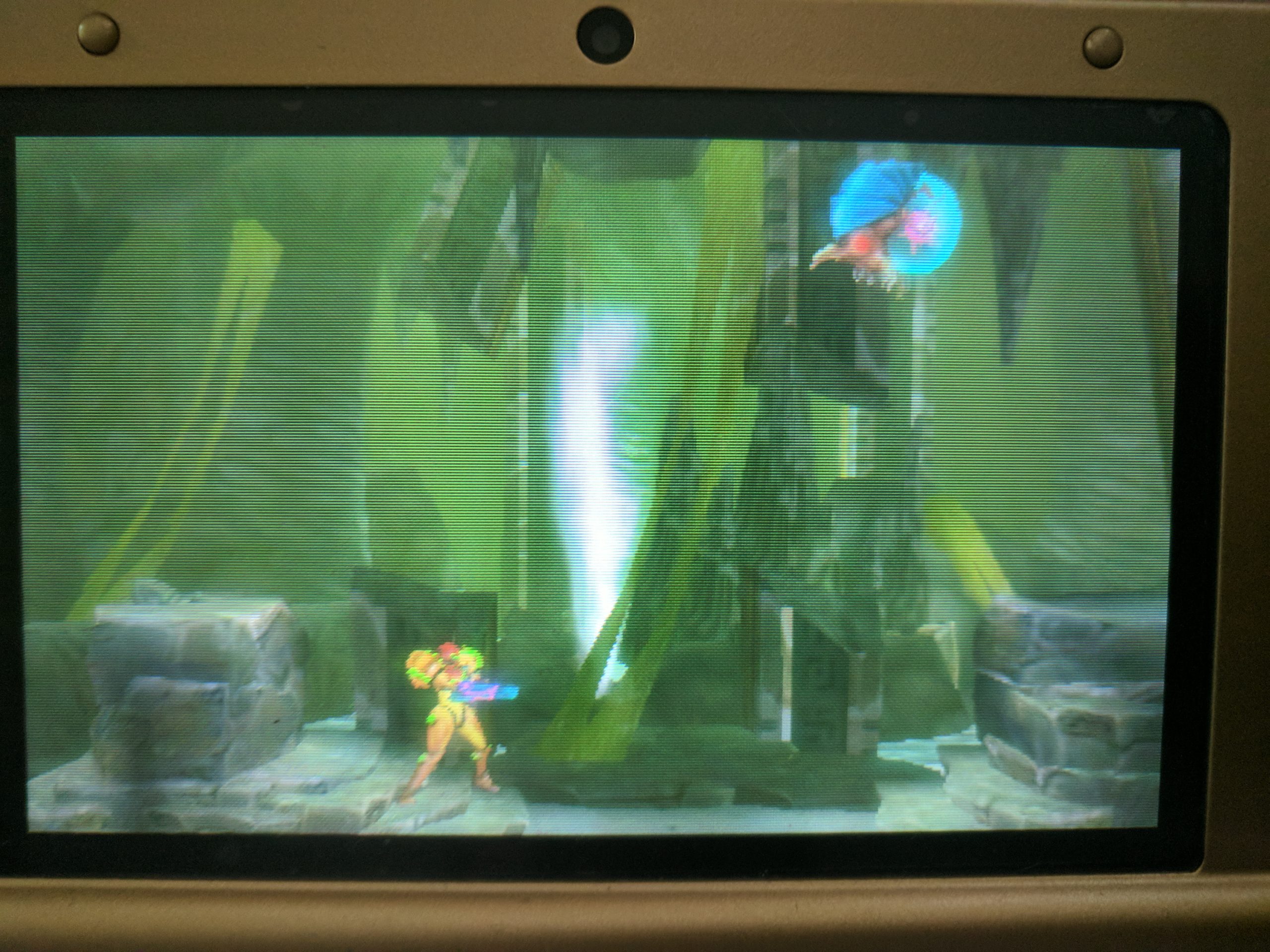 Within the game are power-ups, hidden and required, to Samus’ suit which enable her to not only access other parts of each level but also increase the amount of damage she deals, or assist her in some other way. This helps to make the game feel less linear, as the power-ups aren’t explicit to a specific area or puzzle, as in games such as Zelda, so using them later becomes second nature. The final feature that deviates from the classic is the inclusion of the map screen. Veterans of 3DS games will question my choice of accolade here, but quite simply, using the 3DS touch screen to include a map was a stroke of genius. The previous game had no such functionality for capacity reasons, and for anyone who has played a retro Metroid title as intended, you will either be familiar with Nintendo Power walkthroughs or keeping pen and paper to hand to remind yourself of power-up locations or secrets you couldn’t yet unlock. 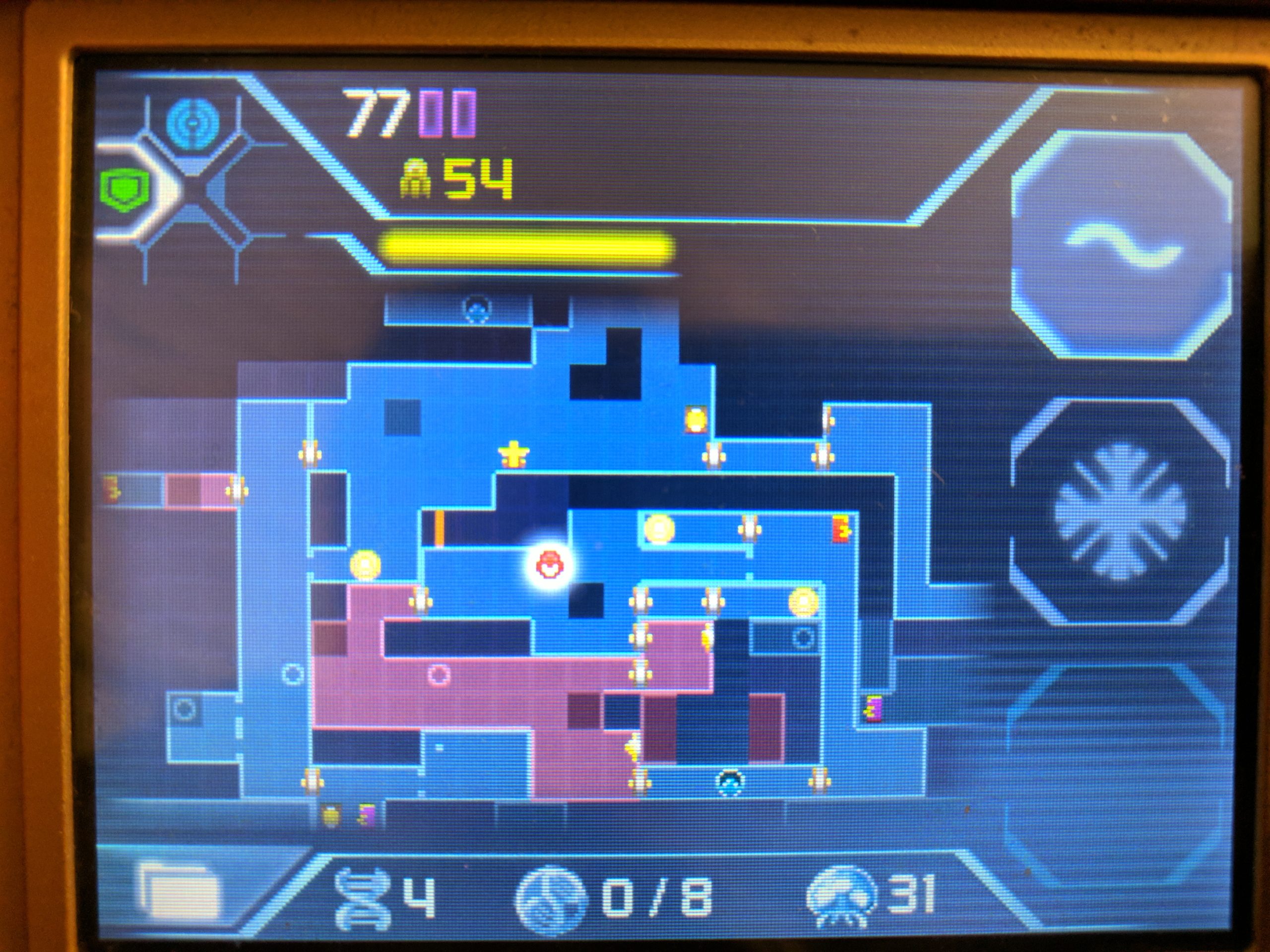 Graphically, the game is stunningly beautiful. Quite frankly its one of the few 3DS games I’ve wanted to play in 3D as the backgrounds are both detailed and immerse. While working through the various levels, you begin to feel part of the game as opposed to simply playing it and, despite the slightly poorer quality sprites, the graphics are really good for a 3DS game. It makes you wonder how well this would have looked on the Switch.

The game’s audio borrows heavily from games other than Metroid II, mainly the Metroid Prime trilogy and Super Metroid games. It adds a layer of intrigue and mystery to the atmosphere, making the music feel like part of the level as opposed to a more emotive piece such as in other Nintendo titles. The sound effects also borrow heavily from the older titles and again, feel right at home here, tapping into the nostalgia of die-hard fans. 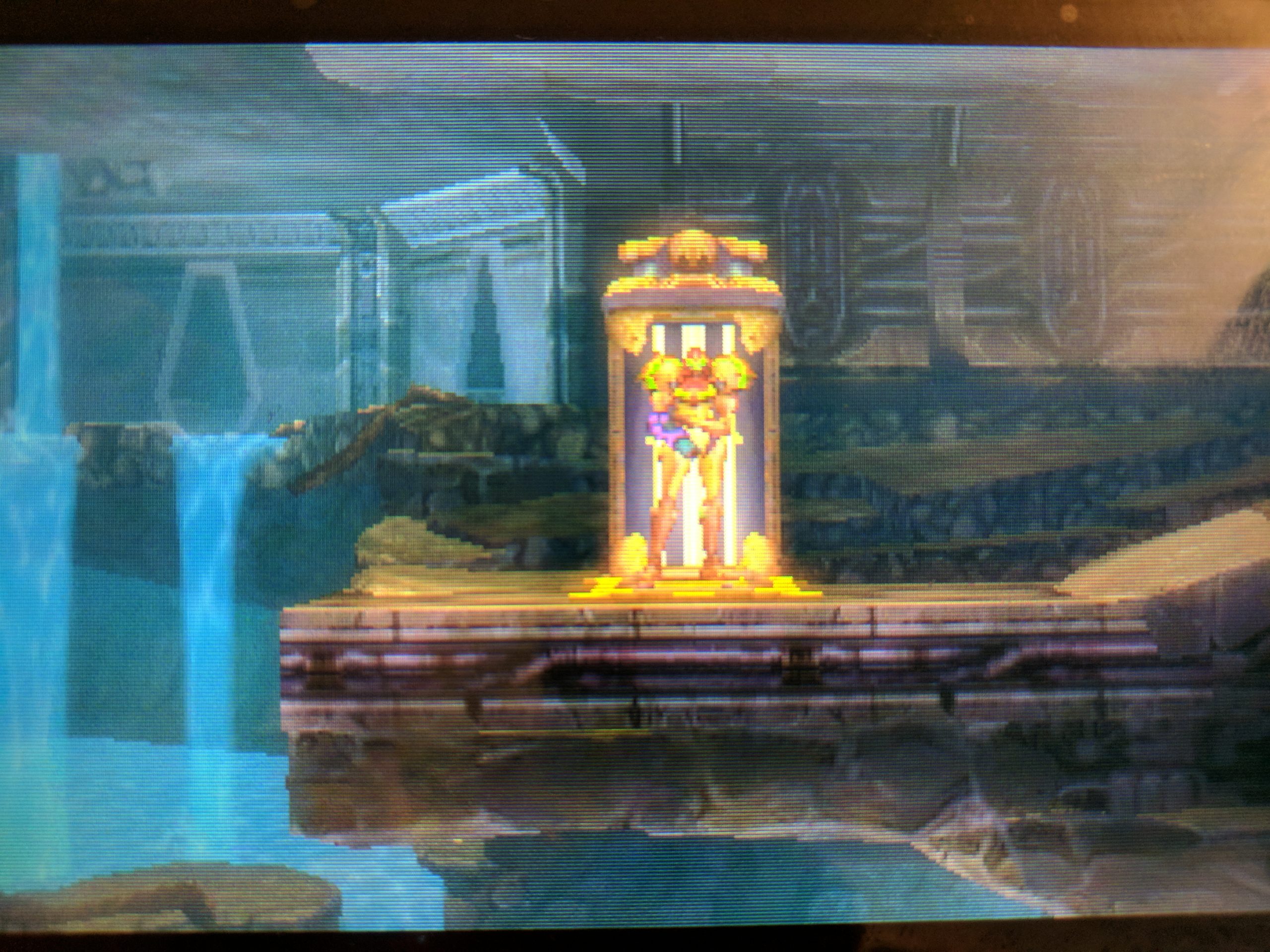 In summary, Metroid: Samus Returns is clearly the game that was needed to revamp interest in the franchise and is a welcome addition to any collection. For those debating it, I recommend picking it up and taking your time to enjoy it. It is clear that Mercury Steam have poured a lot of love and care into a game they want to do well. There were reports before release that this game and Metroid Prime 4’s sales would affect future releases in the franchise and Mercury Steam have tried to make sure their title isn’t the one that jeopardizes that. They have added just enough of their own spin to show themselves as the clear front-runner for 2D Metroid titles in the future.

Metroid: Samus Returns is a fantastic reimagining of a classic, adding to the original formula of a 2D Metroid title to produce something that is fun to play and easy to get hooked on. Samus Returns tailors itself to both hardcore fans and players new to the franchise and is a perfect addition to the upcoming Metroid Prime 4 hype train. Mercury Steam have worked hard to show their love of the Metroid franchise and want to make sure it thrives for years to come