In 2001, Microsoft’s Xbox was the new kid on the block in the video game console space. While Microsoft was undeniably a big company with plenty of resources, they had much to prove when it came to making a great console and producing compelling games for their platform. In order to grab people’s attention, they bet on Halo: Combat Evolved, a new shooter from developer Bungie, as their big exclusive game at the launch of the Xbox. It was a great bet; Halo became a smash hit, revolutionizing the console shooter and establishing itself as Microsoft’s first major video game franchise. But what made it so special? What was it that drew gamers into its world?

As it turns out, all the major elements that caused gamers to fall in love with Halo are found in its second level, appropriately titled “Halo.” 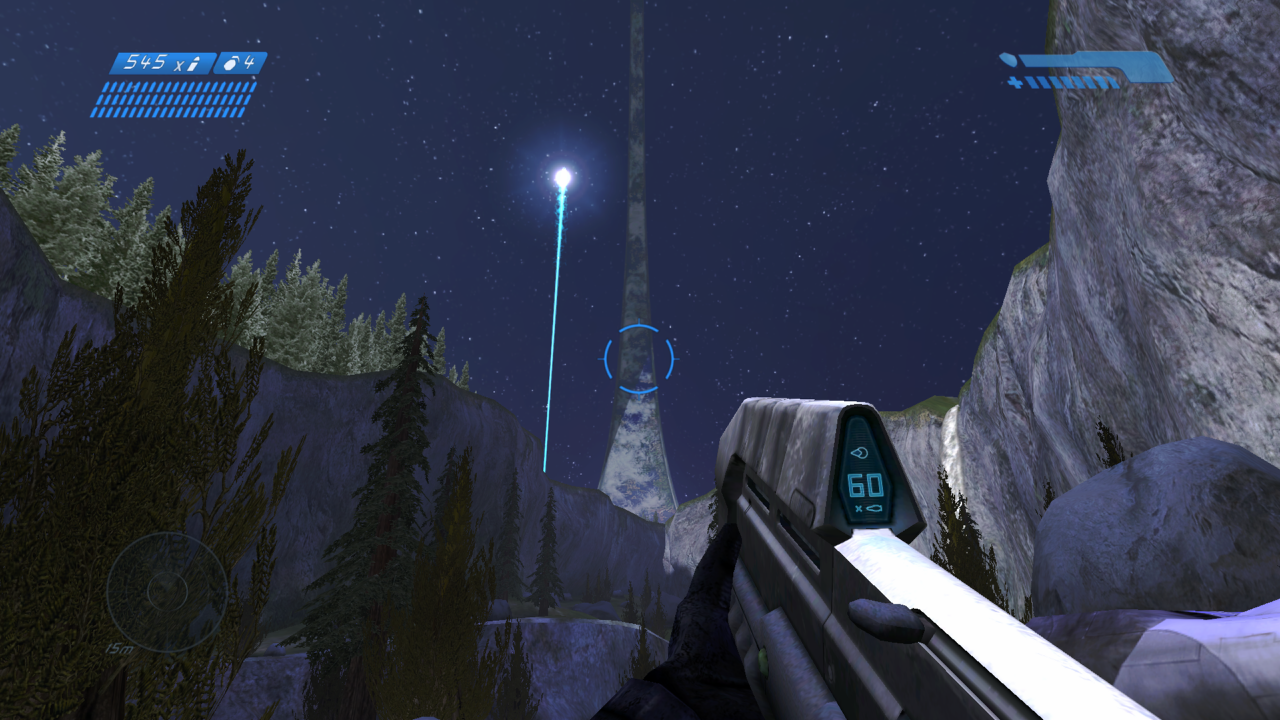 Before we can properly explore the level “Halo,” we need to look at the game’s first level, “Pillar of Autumn,” for context. It acts as an introduction to the game’s story and basic shooting mechanics, placing you aboard the human ship Pillar of Autumn as it attempts to flee from the attacking alien forces known as the Covenant. In their escape attempt, the humans have stumbled upon a mysterious ringed structure, and you, a human super soldier named Master Chief, must safeguard the AI Cortana and escape to the surface of the ring world, fighting off the invading Covenant troops along the way. The level design is similar to that of virtually all of the other shooters of the era, comprised of narrow passageways and small enclosed spaces. It finishes in dramatic fashion as you reach the escape pod and eject from the Pillar of Autumn, hurtling toward Halo. 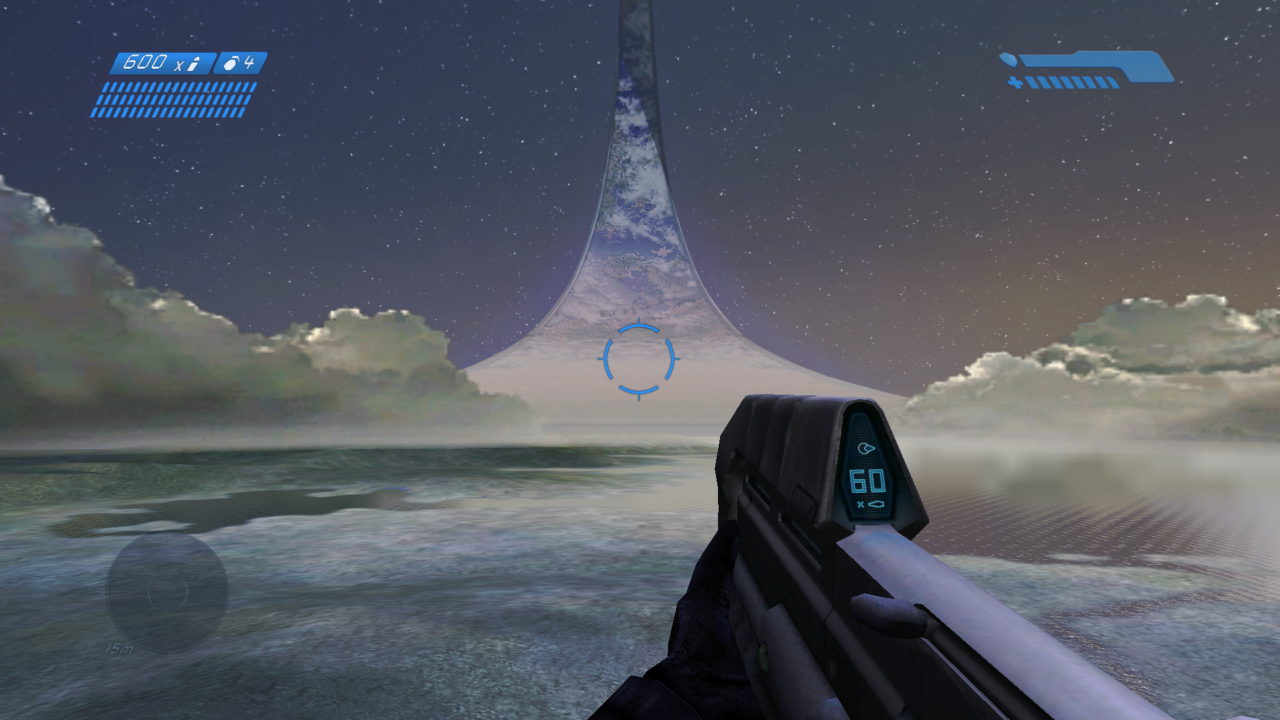 Check out that view!

It is in this second level, “Halo,” where the game shows off its ambitious design. The cramped hallways of the ship are gone, and in its place is an open environment unlike any seen in a shooter up to that point. After crash landing on the Halo and exiting the escape pod, a large expanse opens in front of you, with even more land across a bridge to your left. Looking past a cliff and off into the distance, you can see the ringed structure curving upward, visible even as you look straight up into the air. Alien dropships fly overhead, depositing enemies in your path as you navigate the hills of this strange world and try to make contact with anyone else who may have landed here and survived. You soon discover a small group of soldiers holed up in a large metal structure, and once you defend them against several waves of aliens, the game drops another surprise, literally: a jeep-like vehicle called a Warthog is airlifted to your location, and you get to hop into the driver’s seat. Now the level’s scale becomes truly apparent as you zip across the terrain to several other structures and rescue more human survivors. 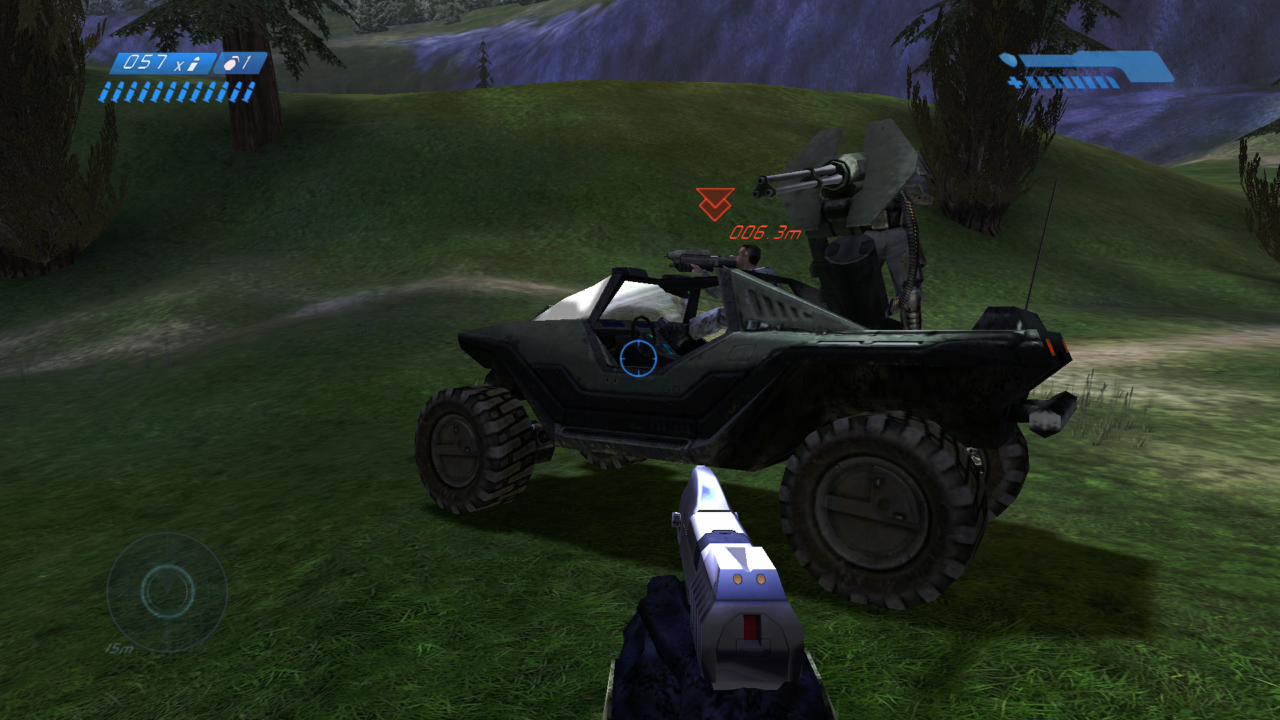 Time to go for a drive!

Even as the game flaunts its wide outdoor environments, it takes time to send you indoors as well. These interior sets can be just as large as the outdoor ones, but a few narrow passages appear too, forcing you once again to deal with enemies up close. This informs you that you can expect variation in design both within a level and throughout the game as a whole. 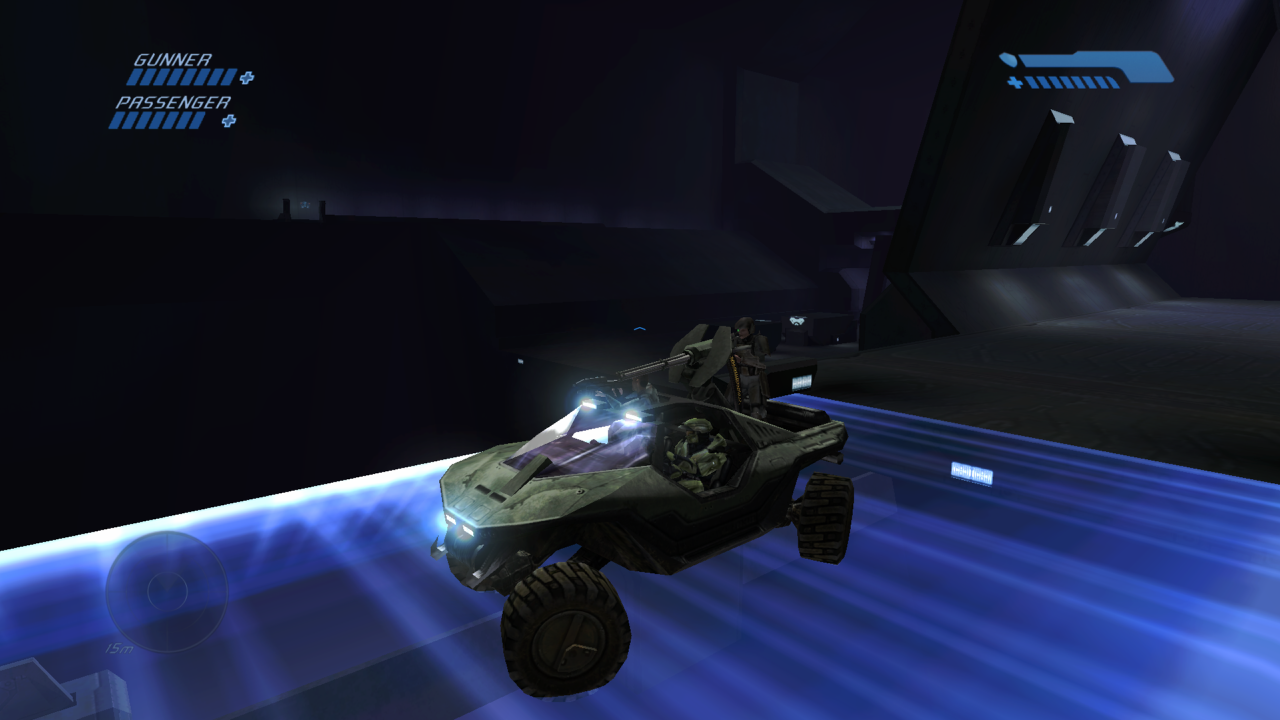 Cortana, housed in a chip inside your helmet, commentates over your exploits, providing intel and musing on the nature of this unknown locale. In this way, she serves as your guide and as a talkative complement to the stoic Chief. Despite being a machine, she is also the emotional center of your journey, lamenting the deaths of the soldiers in your escape pod and conversing naturally with the other humans you encounter. 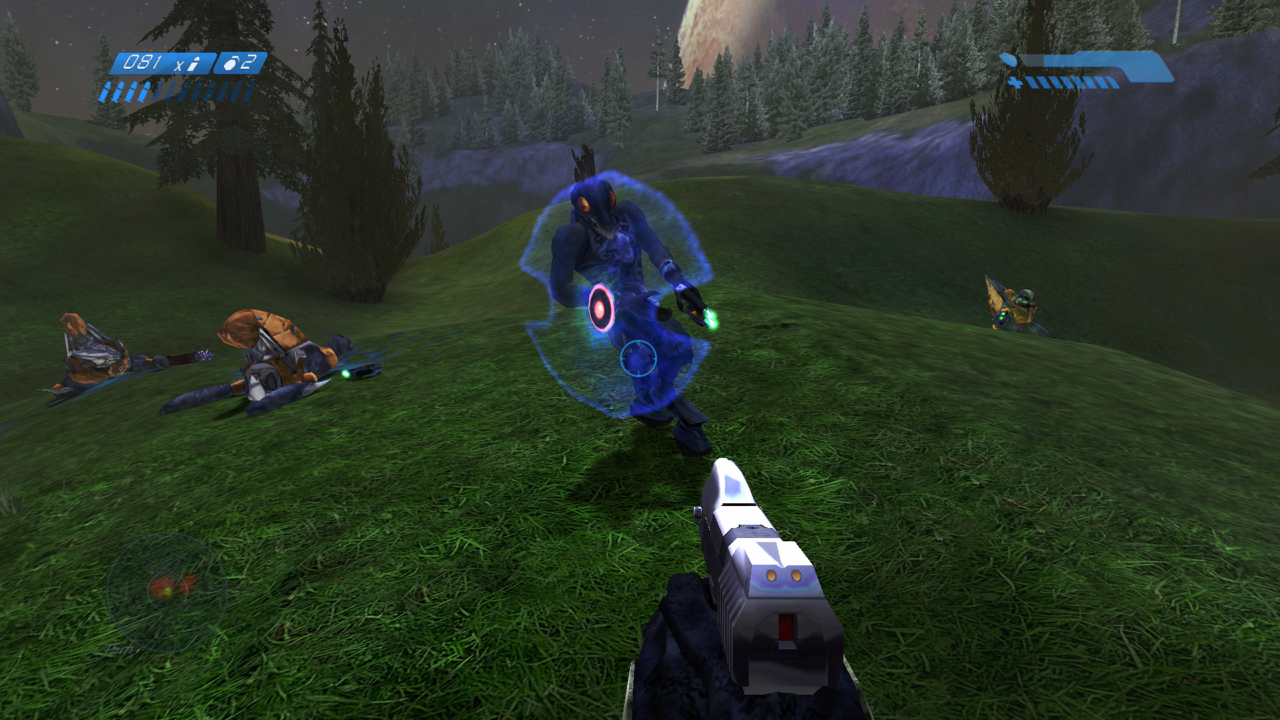 This level also introduces a new enemy, the Kig-Yar, commonly referred to as Jackals.

Throughout the whole level, the audio/visual elements enhance the sense of mystery and heroism presented in the story. While primitive by today’s standards, the graphics on display here were some of the best of its day, showcasing breathtaking vistas and a mixture of both natural and constructed environments. Composer Marty O’Donnell’s iconic soundtrack accompanies your adventure, punctuating the high points with stirring violins and powerful drum beats. 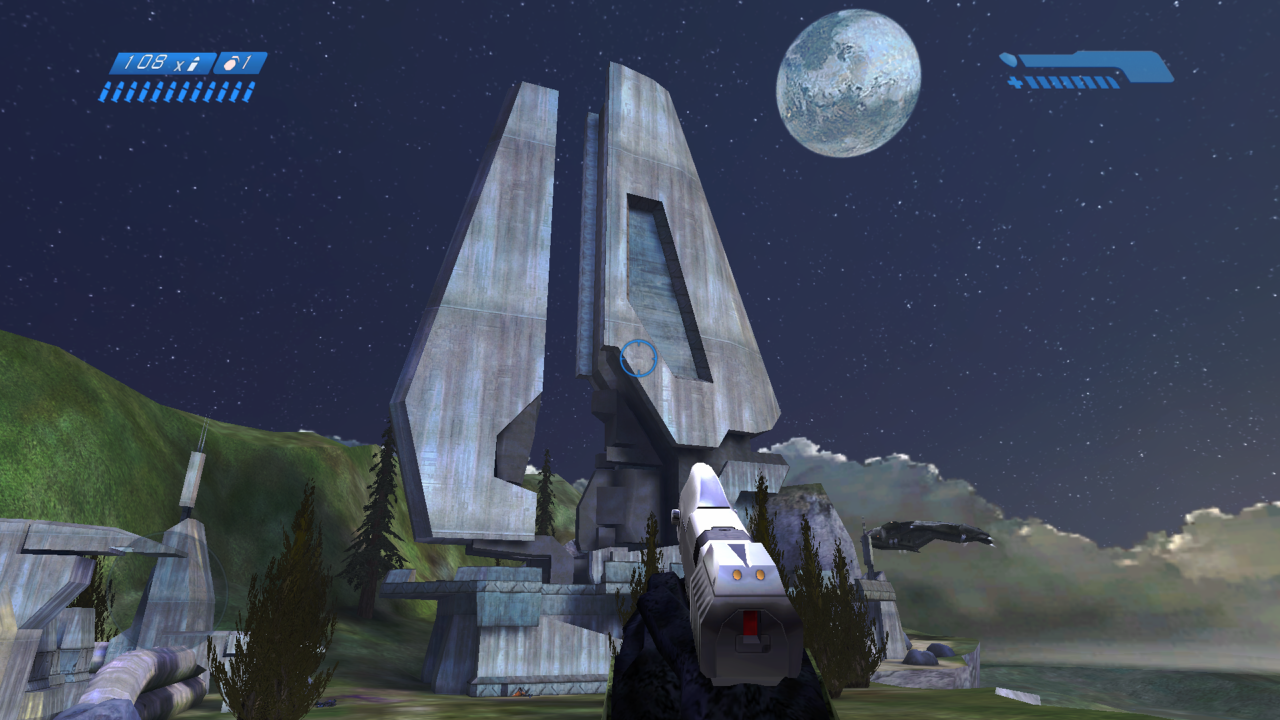 “Halo” offers a little bit of everything: open hillsides, narrow corridors, land and air-based vehicles, and gorgeous scenery. This first glimpse of Bungie’s stunning sci-fi world piques the player’s interest and sets the tone for everything that follows. To this day, the Halo franchise continues to build off of the foundation set in this level from the series’ original entry.