I am not sure if you were forced to take naps as a child, but if you were, perhaps you shared my pain of being bored and lying in bed, arms crossed, staring at the ceiling. Sometimes, my mother would lie next to me to make sure I went to bed. Being the little rascal that I was, I would wait for her to fall asleep and stealthily ease my way out of the situation, gently removing the covers, as if turning pages of a book. The most difficult part about sneaking off of a bed is the noise you make as your body slides across the sheets. If your bed is squeaky, you don’t stand a chance. But as long as you remember that gravity is your friend, you’ll land lightly on your feet, succeeding in evasive maneuvers. Cue “Impressive, Snake!“

The hardest part being over, the hallway looked like the last stretch of a race to me as I made my way to the living room. My stride grew from a light tiptoe to an extended, dramatic lunge, as if I was performing ballet. The room was quiet and still. I shuffled over to the television remote and switched it on. As if to alert my mother that something was amiss, the TV shouted the news at what seemed like the highest volume. In a panicked spasm, I muted it and froze, halting my breath, waiting for any noises of realization that there was a vacancy in my room. 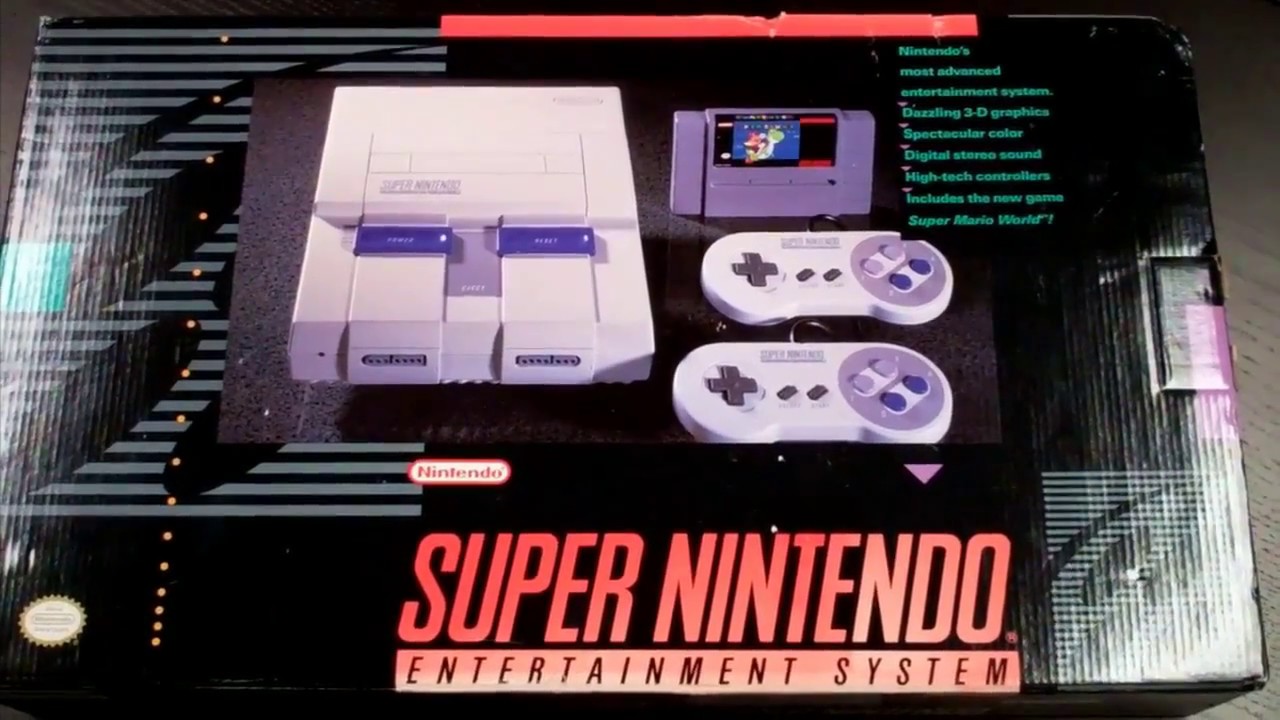 After a few heartbeats of silence, I hit the down button on the volume tab and lowered it to a safe zone which I could still enjoy, but also remain covert. Finally, I opened the drawer below the TV and, yes, there it was: my Super Nintendo. I took it out and began to set it up. My games were all stacked up and I scanned the list for the one I was looking for. All of my favorites were there: Super Mario All-Stars, Yoshi’s Island, Earthbound, Super Mario World—classics. But the one I grabbed, my favorite game and the one I played the most, was Kirby Super Star. 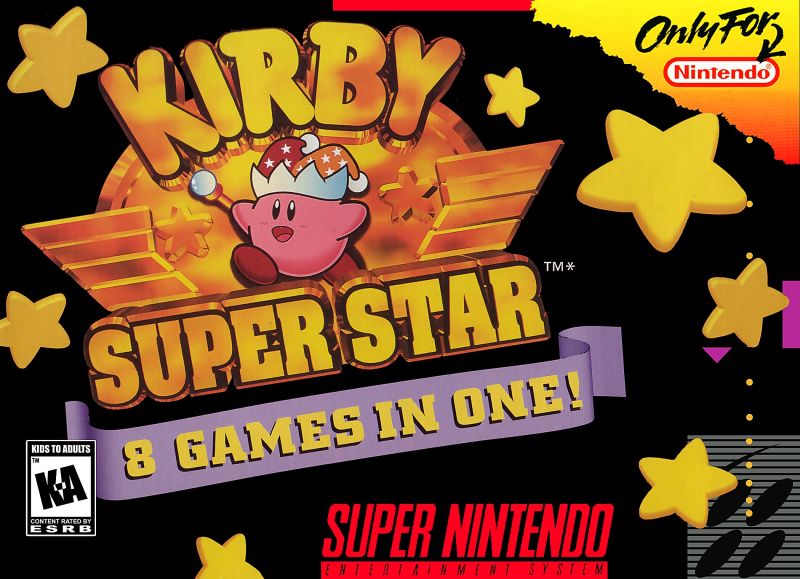 This picture takes me back

I was first introduced to Kirby on the NES in Kirby’s Adventure. The level-beating, platforming, pink fluff caught my attention with its gameplay mechanics of being able to copy some enemy abilities and play minigames aside from full levels. Kirby Super Star brought more of that, but so much better.

This time around, instead of worlds, there were separate adventures Kirby could go on, like retrieving stolen food from a certain greedy king, putting an annoying Whispy Wood in its place, and silencing the Halberd while dueling its commander. Every adventure is a blast and each has its own quirks, goals, and secrets. But my favorite one is the Great Cave Offensive. 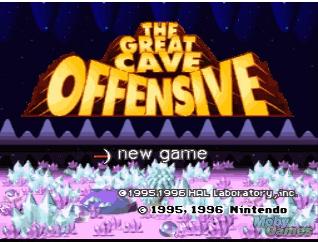 The Great Cave Offensive involves Kirby falling into a random deep hole and, while finding a way out, going on a treasure hunt to find 60 treasures scattered across various environments and landscapes. Enthralled with an addictive soundtrack and simple, yet ingenious puzzles, I spent much time attempting to find every single chest.

There were four areas overall for Kirby to explore. They were traversed in order, starting with the Sub-Tree Area and followed by Crystal Area, Old Tower, and Garden Area. The most memorable parts of traversing through these areas were the four bosses that lurked at the end, mainly the computer virus boss (yes, really). 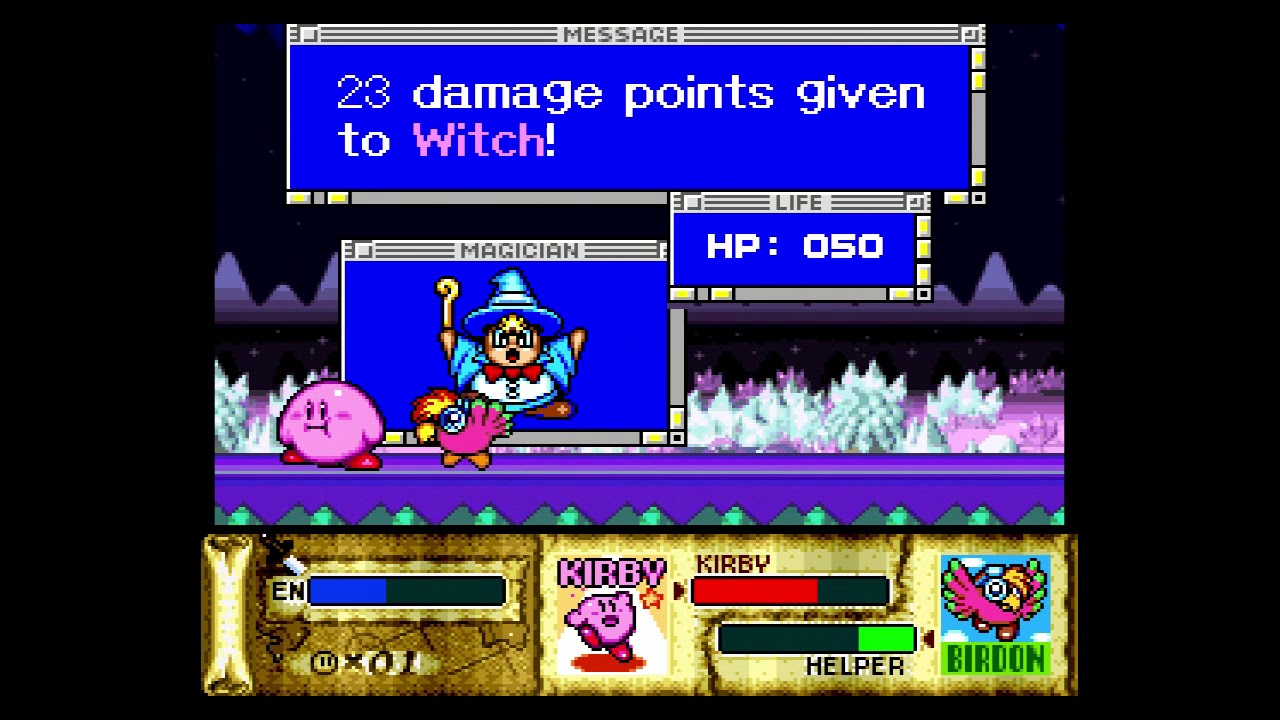 Something I greatly appreciated was the ability to play with a friend throughout Kirby’s adventure. The pink hero can suck up an enemy and produce an ally who accompanies him in fights and searches for treasure. Player two can take control of the ally, or it can remain a bot. Either way, it’s handy when saving an ability for later.

In between bosses, somewhere in the Crystal Area, lies a Mining Cart Area, which ended up being the main reason I played through the level over and over again. The soundtrack alone was enough to make me want to ride the carts forever. The constant change of scenery and different things to do in each level made it so fun.

Since there is no map, the Great Cave Offensive feels like one giant level, but you can save Kirby’s progress in certain save points scattered throughout your travels. I do not think I ever collected all 60 of the valuable riches, but I have been meaning to return someday to attempt once again.

Fans of Kirby Super Star may have also noticed that the Great Cave Offensive was made into a Super Smash Bros Ultimate map. While humongous, it’s impractical and largely hated among avid Smash Bros veterans. It mainly serves as a fun map riddled with easter eggs from the original level from which it was taken.

The themes of being lost and treasure hunting also drew me in as a child, because who doesn’t want to be a treasure hunter and risk their life to find some ancient, forgotten treasure? I’m surprised the developers didn’t give Kirby a fedora and whip costume for this adventure. It would look good, trust me. They did eventually give Kirby a whip…but it’s not what I had in mind. HORRIBLE! 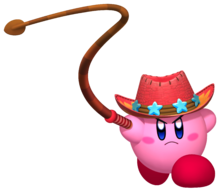 Kirby platformers are great, but the thing I most appreciate about them and that Nintendo has never strayed from is the fact that they’re so wholesome. It’s important to never lose sight of what’s good and pure in gaming. I want to be clear that I am not frowning on more violent or graphic games, as those can be fun too. But Nintendo manages to make games fun and encouraging at the same time, and I hope they never lose that ability.

Nintendo was my childhood and the Great Cave Offensive in Kirby Super Star was a bookmark in an entire library of games that I played as a kid. I appreciate the nostalgia that the classic developer puts in their modern games, as they are great reminders of formative times. What’s a Nintendo game that you played as a kid that’s a good memory? Leave a comment and tell us about it! Look forward to more “My Favorite Level” articles in the future from our crew here at Geeks Under Grace! 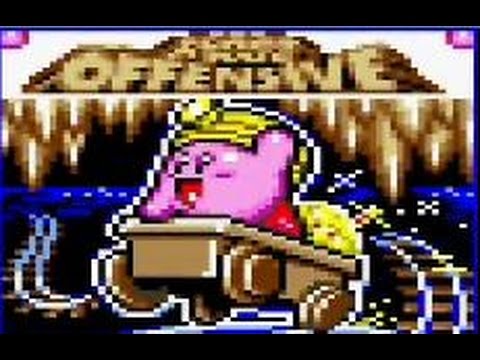