Blame it on the banana. 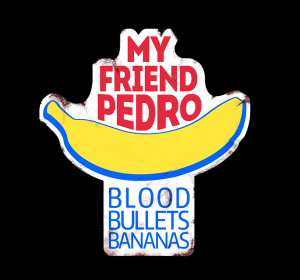 After the incredible trailer from Devolver Digital’s E3 conference in 2018, I highly anticipated the release of My Friend Pedro by developer Deadtoast. So many questions ran through my head, like: “What other weapons will I get to use? Can I ride a skateboard while shooting at a pan in the air to kill multiple people? What on earth is that banana’s deal? Will all my questions be properly answered at the end of this adventure?” Probably not, but I’ll take it anyway. 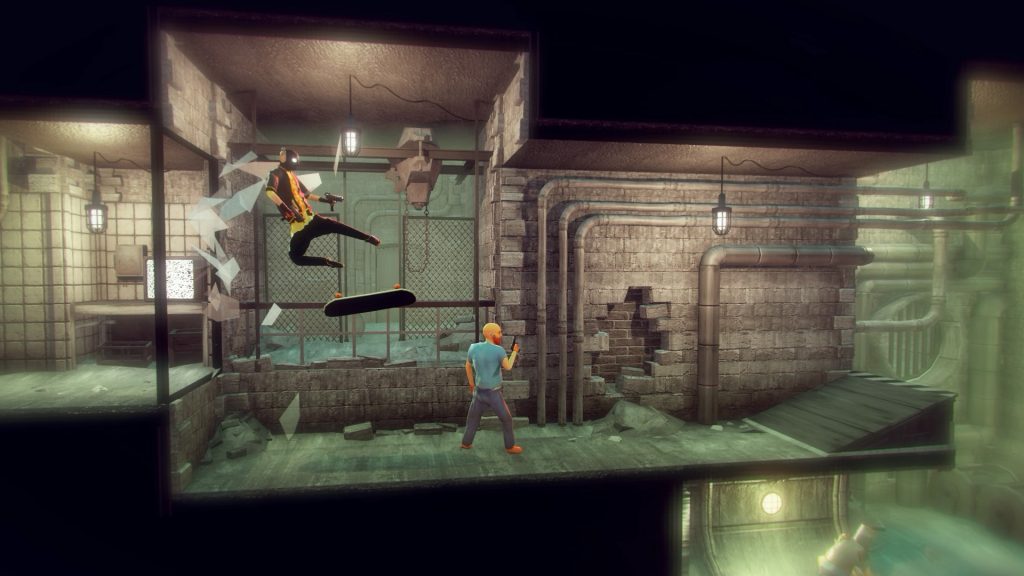 Strong Violence: The violence is integral to the spectacle in this game. Sprays and splotches of blood shoot out from enemies when they die from being shot or kicked; when you take damage, the screen flashes and turns grey for each hit you take. Enemies can explode into chunks of meat that can be used to kill other enemies by kicking them, which is by far the most gruesome the game becomes.

Language: There isn’t a lot of strong language thrown around in the game but expect words like “s***” and “d***”. 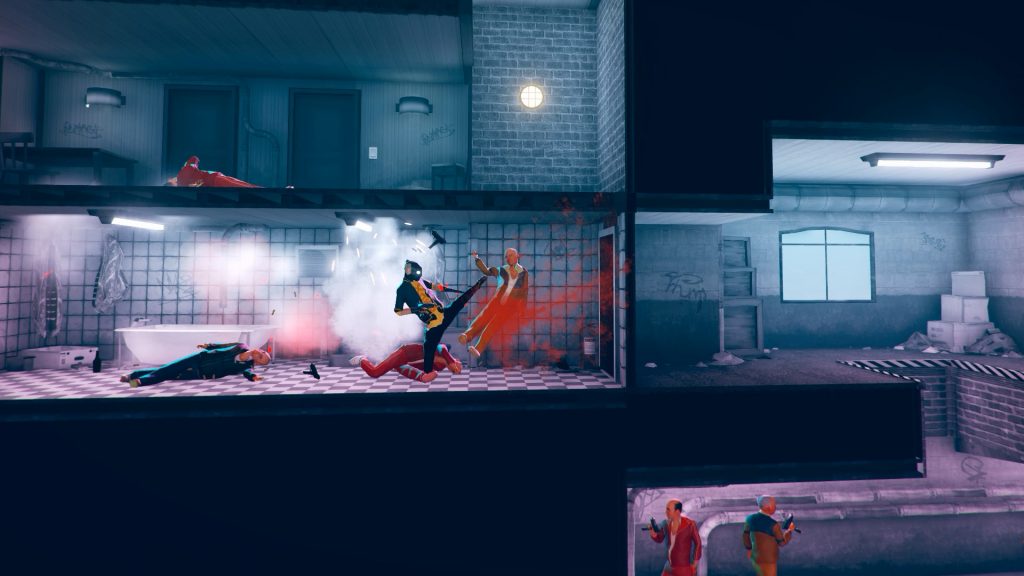 My Friend Pedro is an action platformer that tests your creativity with the resources given to you in each stage. You have a selection of guns, a jump button, a kick button, a dodge button to twirl in place, a focus button that slows the world down, and an aim split button when you need to shoot in two directions. You will need to use all of them consistently throughout the whole game.

In the game, your talking banana friend, Pedro, wakes you up in a butcher-shop storeroom. You have no recollection of who you are or how you got there, but Pedro reassures you that he will do everything he can to help you figure that out. Obviously, this is easier said than done since gangsters, underground nerd warriors, and elite soldiers want your character dead. Nothing a little hot lead and some finesse can’t fix. 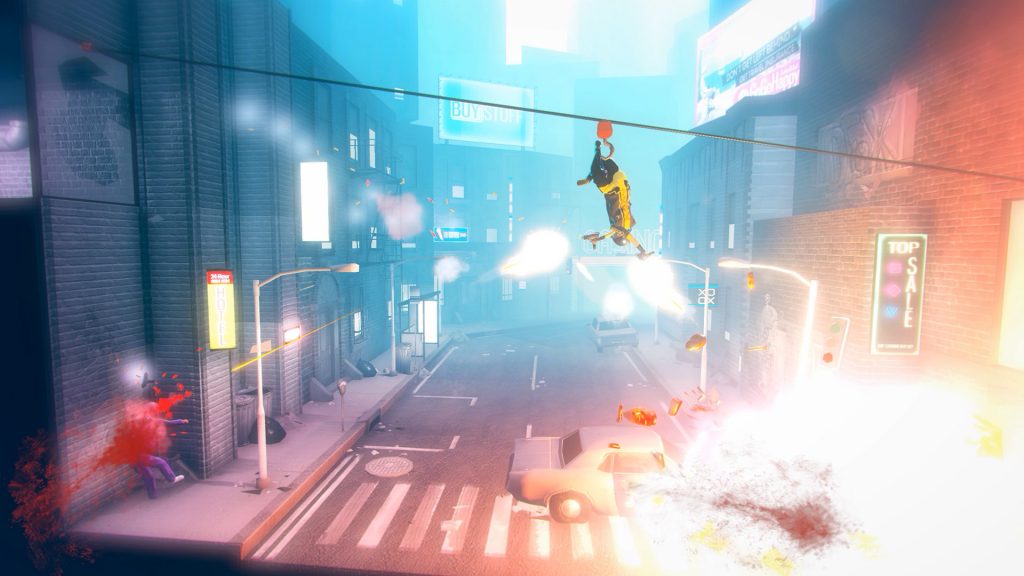 My Friend Pedro strikes this good balance between spectacle and skill where you can’t cruise control your way through levels. You have to take your time and understand what elements are available for each section and how many enemies you’ll need to eliminate before moving on. Of course, making it look as cool as possible is the entire point of completing each level. 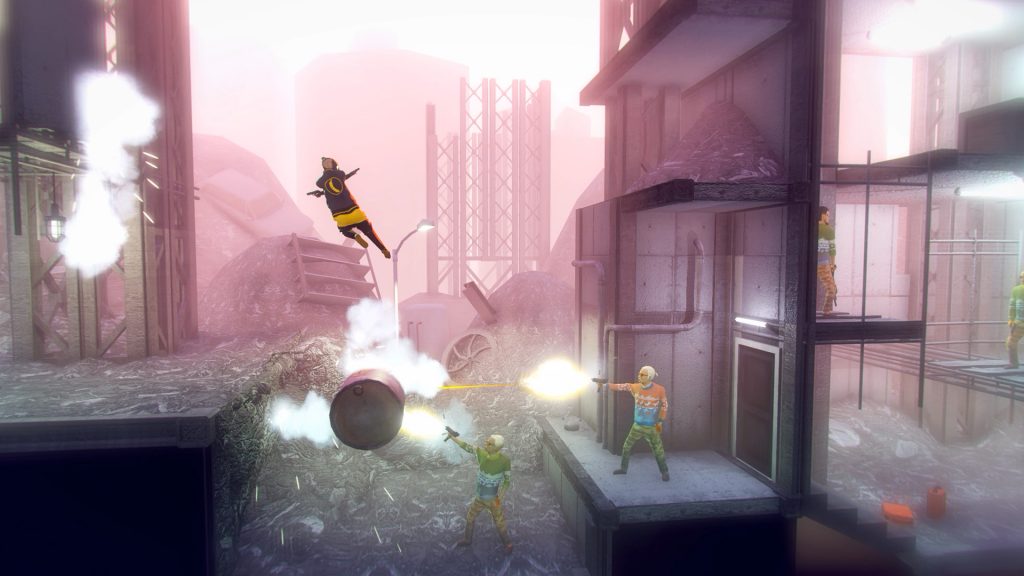 Planning will be needed to ace every level, but that doesn’t mean improvising isn’t fun to do either.

On completion of a level, you’re graded from C to S rank based on time, kills, and bonuses like finishing the level without dying. The ranking screen also shows an online leaderboard to see how you fared against your registered friends or the rest of the world. It also snips a short animated clip of your most stylish kill that you can share on social media, which is nice since I’ve forgotten to press the snapshot button on my Switch when playing. 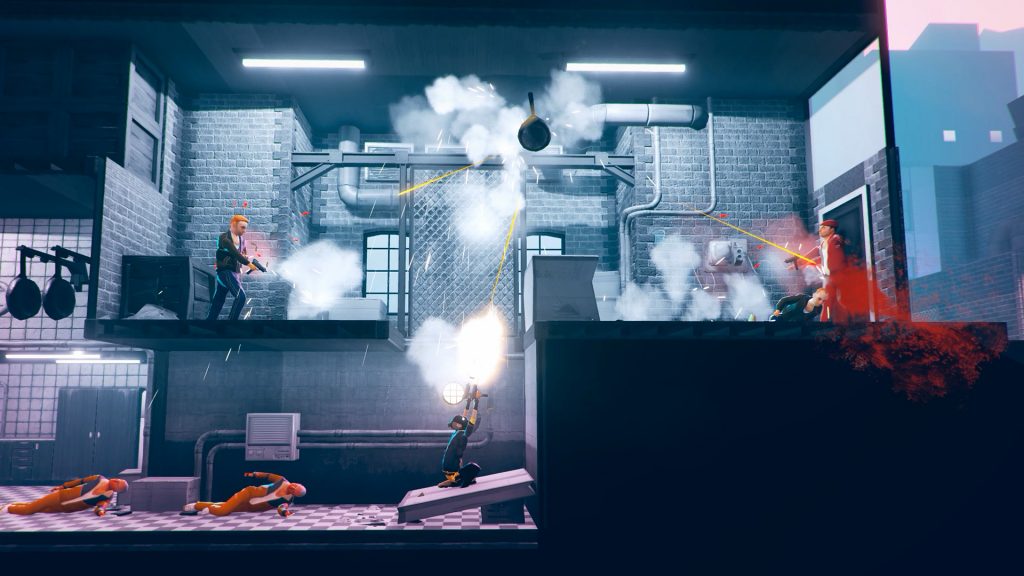 The quintessential pan shot. Feels better doing it yourself than watching it.

The game as a whole holds a good pace, introducing mechanics and tricks you will need to learn as the levels become more complex. There are four worlds in total, each having a boss at the end that’s an appropriate adrenaline-pumping set-piece. For example, the first world boss stage is a motorcycle fight against other motorcycle riders and a butcher in his storage truck as you speed along a highway, listening to this track. 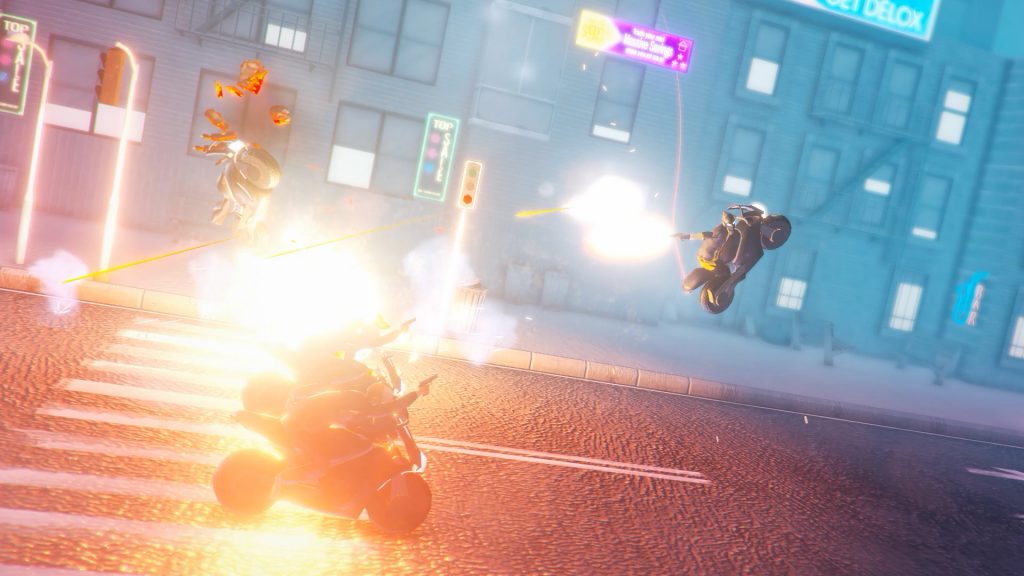 If you thought your commute was murder…

The game feels really good to play. When the music’s going and you’re frantically pressing all the buttons to do a twirling flip-jump after kicking a barrel to kill one guy on one side while you shoot at the guy on the other side in slow motion, (deep breath) it feels like being in The Matrix as John Woo minus the doves. The aim assist also helps with pulling off tricks as you normally aim with the right analog stick and I was having trouble with manual precision. 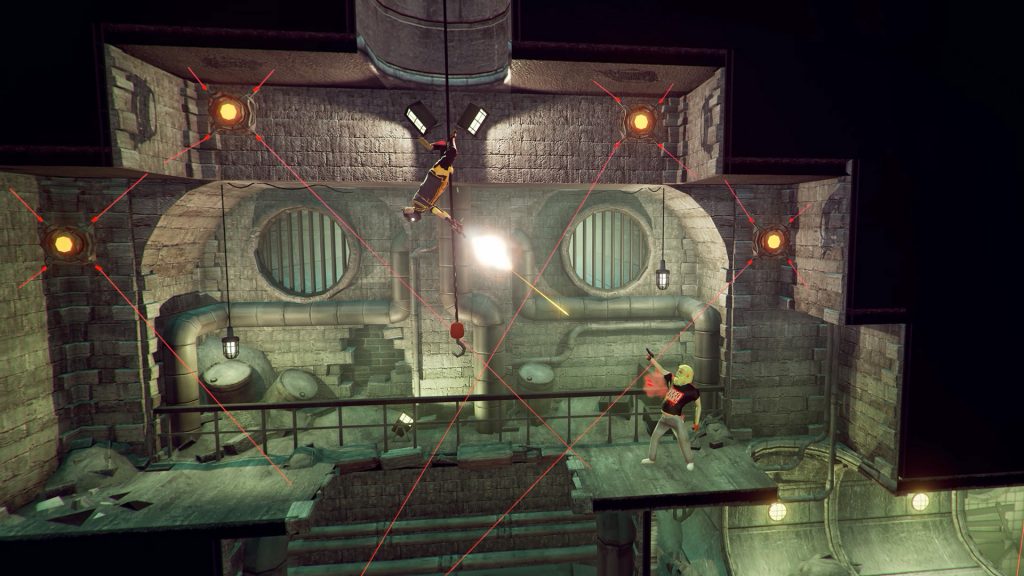 There’s always an air of brevity when someone (or some-banana) talks. This helps break up the action so you can remember to breathe. Pedro, among others, casually address the dire situation as you progress, mocking the idea of taking the game seriously. Honestly, this actually helped me get through the game because I would be plagued with the desire to immediately replay the level whenever I would get a low rank…and it was happening a lot. 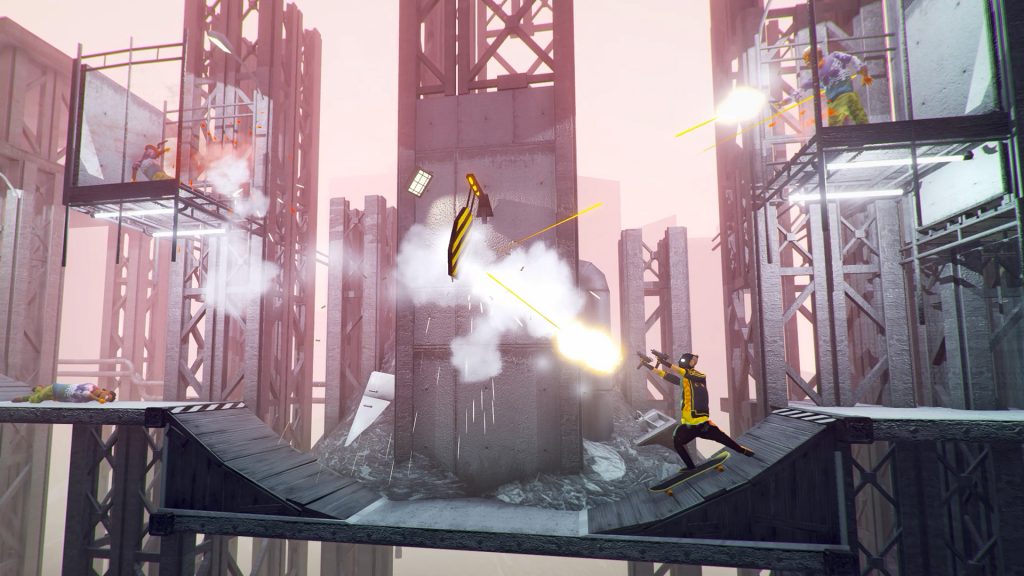 Imagine my surprise upon finishing the first level and getting slapped with a “B”. I tried again, thinking that I’d do a lot better after playing through it once. I only did marginally better and went, “OK. This is serious now.” If you want to get to S rank, you’ll need to use everything you have to rack up points. Is there some object nearby you can kick or ride on to incorporate in your kill? Use it. Do you have focus left over? Use it. Are you playing on normal? Better raise the difficulty.

I feel conflicted about the scoring system. It’s great that the game aggressively encourages creativity to maximize your score. However, the difficulty modifier on your score doesn’t feel significant aside from “Bananas” difficulty which includes high enemy damage and accuracy, no regenerative health, and your dodge button no longer has dodging properties. I was expecting enemy placement to change or different items to be placed in earlier stages where they previously weren’t available. It doesn’t help that there isn’t a lot of incentive to continue playing the game after completing the story aside, from bragging rights. 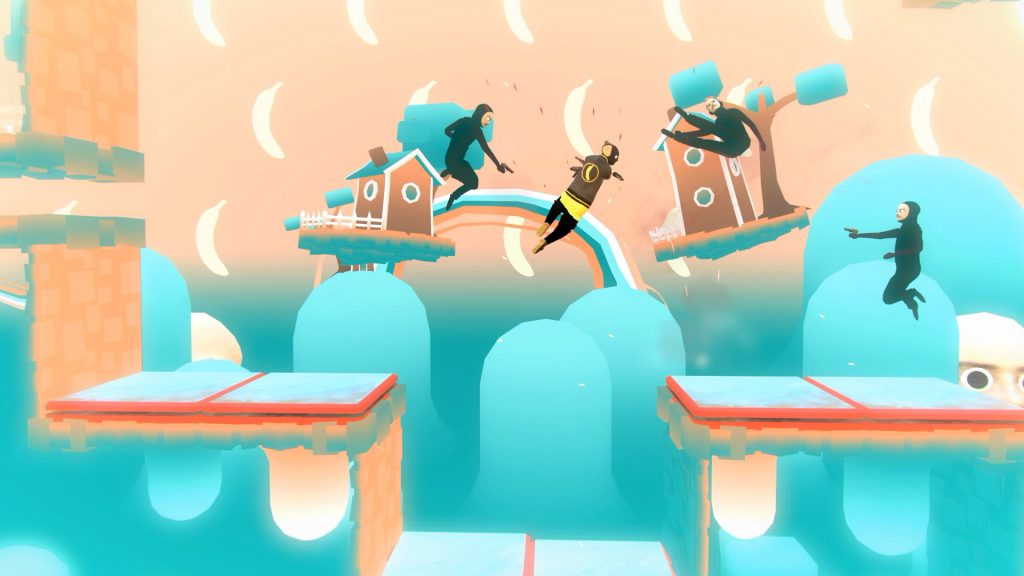 In conclusion, My Friend Pedro is still a great game and doesn’t skimp on the entertainment you can get while going through it the first time. If you’re fueled by the desire to do better, you’ll definitely be playing this longer than most. With Super Mario Maker 2 on the Switch, it sparks my interest in seeing a level maker come out for My Friend Pedro to potentially increase its longevity. I think it would work well with the online functions available. Deadtoast Entertainment delivered a solid product for which I would love to see a sequel, but regardless, I’m excited for what the team will be releasing next.