“Trust no one, report everything, but most importantly, remain happy. Happiness is mandatory.” –Friend Computer 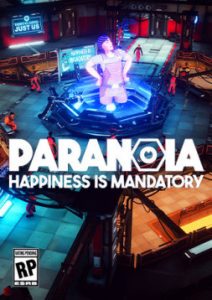 Paranoia: Happiness Is Mandatory is an inspired CRPG based off of an 80’s table-top RPG named Paranoia. You play as a leader of a team of troubleshooting clones in a dystopian world ruled by a paranoid AI named “Friend Computer.” Your task is to protect Friend Computer against hostiles who range from robots, defective clones, your team, or even yourself.

Violence: There are enemies in the game to be killed including human clones and robots. It is also possible to commit suicide.

Drugs/Alcohol: There are substance addicted robots and clones.

Language/Crude Humor: There is a plethora of crude humor used throughout the story.

In Paranoia: Happiness is Mandatory, you play as a clone who has just been assigned to lead a group of a team of troubleshooters to carry out missions for Friend Computer, our all-knowing ruler. These missions can range from investigating murders to helping bring back a substance-abusing robot. Head to the debriefing room and receive your quest from our almighty AI through an abundance of sometimes demeaning dialogue choices. Once that is finished, gather up your crew! Each crew member has a special ability, so be sure to select carefully, though in the beginning, you don’t have much of a choice.

Once your mission is assigned, take your crew and get to work. There is just one problem however, and that is that there are traitors about! The treacherous fiends are trying to overthrow our beloved ruler and take the world into their own filthy palms! You can root out these traitors along the way during missions assigned with your crew, but be careful because they could be traitors too! Keep an eye out for any suspicious activity from your crew, but don’t think you’re Mr. Clean either because you could very well be compromised, too.

Throughout the missions, you will be asked to perform certain tasks such as seeking out traitors or having unsuspecting citizens try an experimental batch of a bubbly beverage. You get to and from locations by clicking where you want to go and having your character automatically move there.  Not everywhere you want to go is visible though;some rooms do not light up until you’re inside them, so be careful.

Here’s the confession booth, a glitch in the game got me to a 90% treason level, so I figured I should get here immediately!

If you do end up running into trouble, you can combat your enemies by clicking on them which automatically attacks them with your equipped weapons. There are other abilities you can have to aid you, such as getting a charged headshot on your enemies along with the mutations you get when becoming a new clone. These mutations can be anything from telekinesis to lightning.

One of the game’s overlying mechanics is the treason bar. You can gain treason points by performing suspicious tasks such as entering an area you don’t have clearance in, hacking machines, poor dialogue choices or your own team throwing you under the bus. You can lower your treason levels by confessing your sins at a confession booth, but be careful because you can fill the bar even more if your wits aren’t about you!

If the treason bar ever fills up, you have two choices:

Being killed in the game isn’t a bad thing. Once killed, you become a different clone, meaning you can re-balance your skill points and get a different mutation to help you throughout your missions. This also means that your treason bar is reset back to zero percent. You don’t even have to wait to die to do thisyou can use the self-terminating booth I mentioned earlier instead of at any time.

However it is you want to play, whatever the choice you decide to make, just remember one thing:

Overall, there are definitely some things to like about this game. I had never played the original tabletop RPG, and being introduced to it through this game definitely made me interested in giving it a try. I enjoyed and appreciated the wit used and the first few hours of the game were new and fresh. I absolutely love the concepts and would definitely welcome a sequel if the game can learn from its shortcomings. The repetitive nature of the combat, the fetch quests, and the long periods of walking (which in a point-and-click walk style video game, you’re doing nothing during that time) gave me a feeling of grinding and boredom at points in an otherwise intriguing setting. 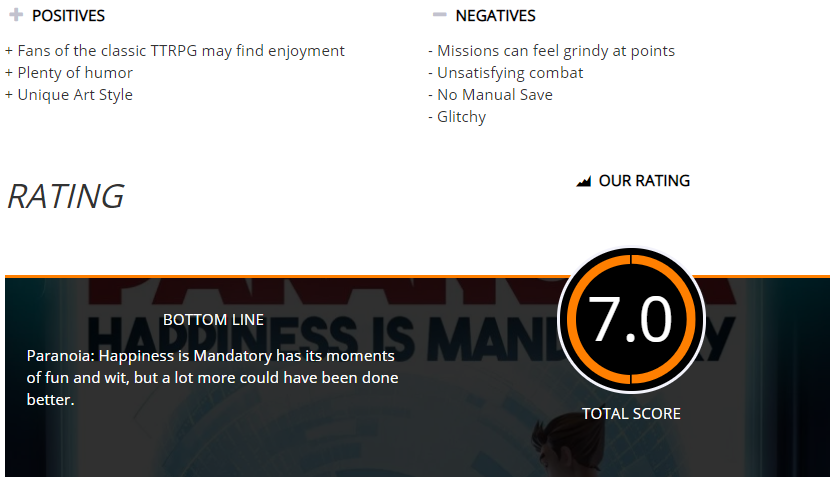 Paranoia: Happiness is Mandatory has its moments of fun and wit, but a lot more could have been done better.