While at PAX over the weekend I had the opportunity to play Dead Island 2 and speak to one of the developers.

Let me first start by saying that Dead Island 2 looks great! The graphics have been given the “next gen” treatment.  I played the PS4 version. The overlay looks more like Borderlands than the first Dead Island, except the cell shading isn’t very overt.  It almost reminds me of the way that Black Ops 2 online multiplayer looked.

We only were able to play one mission–a co-op multiplayer. In this specific gameplay, we were right outside of the Hollywood sign in L.A. We had to find parts to make a gun. Once you found enough parts, a gun–equipped with shock bullets–was auto-crafted. 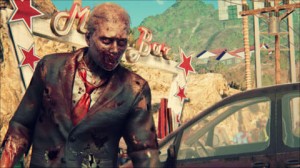 Dead Island 2 definitely takes an over-the-top approach to the series.  When I asked Daniel (from Yager Studios) about the difference, he explained that the first game tried to take itself seriously, while, at the same time, having crazy weapons and upgrades. After feedback from fans, they decided to go in a different direction. Hence, the launch trailer being much more tongue-in-cheek.

Personally, I am very excited for this game’s release. I think playing it with three other players will make for a very fun experience. If you didn’t like Dead Island, I would still say to give this game a chance because you may like the changes the developing team made.

P.S. I think Ernie Hudson makes an appearance in the game.