News flash: the Wii U was a financial failure. And if that hyperlink isn’t enough to convince you, Nintendo is all but screaming it to the heavens by rereleasing every major Wii U game on the Switch in a series of “Deluxe” editions. It’s a pretty blatant attempt to make up some of the money they lost on the original releases. For the longest time, it seemed as if they’d forgotten the little giant that is the Pikmin franchise. But then, finally, it happened: Pikmin 3 Deluxe was announced, and, along with Super Mario 3D World + Bowser’s Fury, the Wii U was nearly officially declared obsolete (while Star Fox Zero silently weeps in the corner).

Violent Content: The Pikmin are in constant physical peril, and you can’t save them all. They’ll be eaten, electrocuted, drowned, crushed, and perish in otherwise gruesome ways. Pikmin deaths amount to little more than a little Pikmin spirit rising up, so it’s never anything terribly graphic. 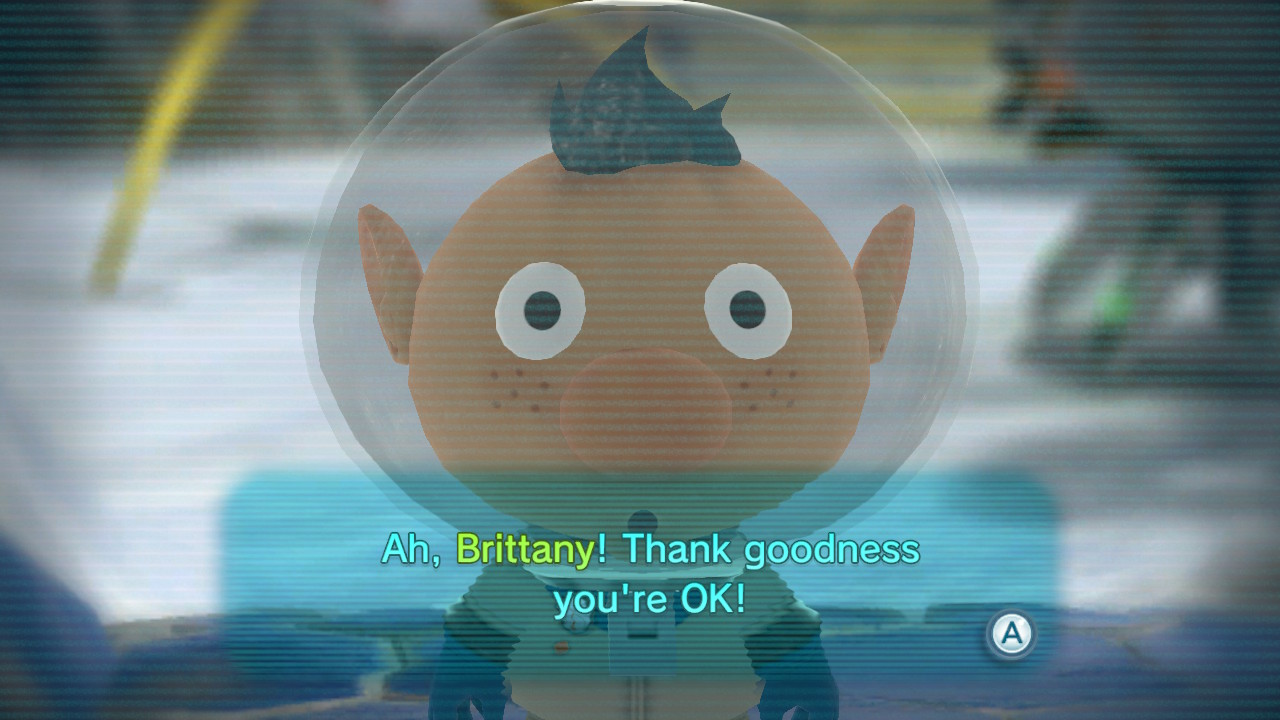 I feel like I say this every time I cover a Nintendo franchise, but I’ve been a fan of the Pikmin series for as long as I can remember. Growing up with a GameCube as my first major system, I latched onto the franchise at a young age and never let go, even though Nintendo seems committed to stringing us along for as long as possible between installments. And I’m not joking about that; it’s been 7 years since the last mainline release (Hey, Pikmin! doesn’t count. I will fight you), and while it may not quite be Pikmin 4, Nintendo certainly seems to hope that Pikmin 3 Deluxe will be enough to tide fans of the series over until an official sequel.

I’ll start with this: Pikmin 3 is an incredible game. GUG already has a full review of the game, so I won’t go too far into the mechanics and gameplay of the original here. If you’ve played a Pikmin game, you know the drill. Command an army of little Pikmin creatures around a gorgeous post-apocalyptic Earth to collect whatever the end-game item is this time around; in the case of this third game, it’s fruit for the starving planet of Koppai, who have all but exhausted their food supply through, in the game’s own words, a “lack of basic planning.” (Real subtle, Nintendo.) 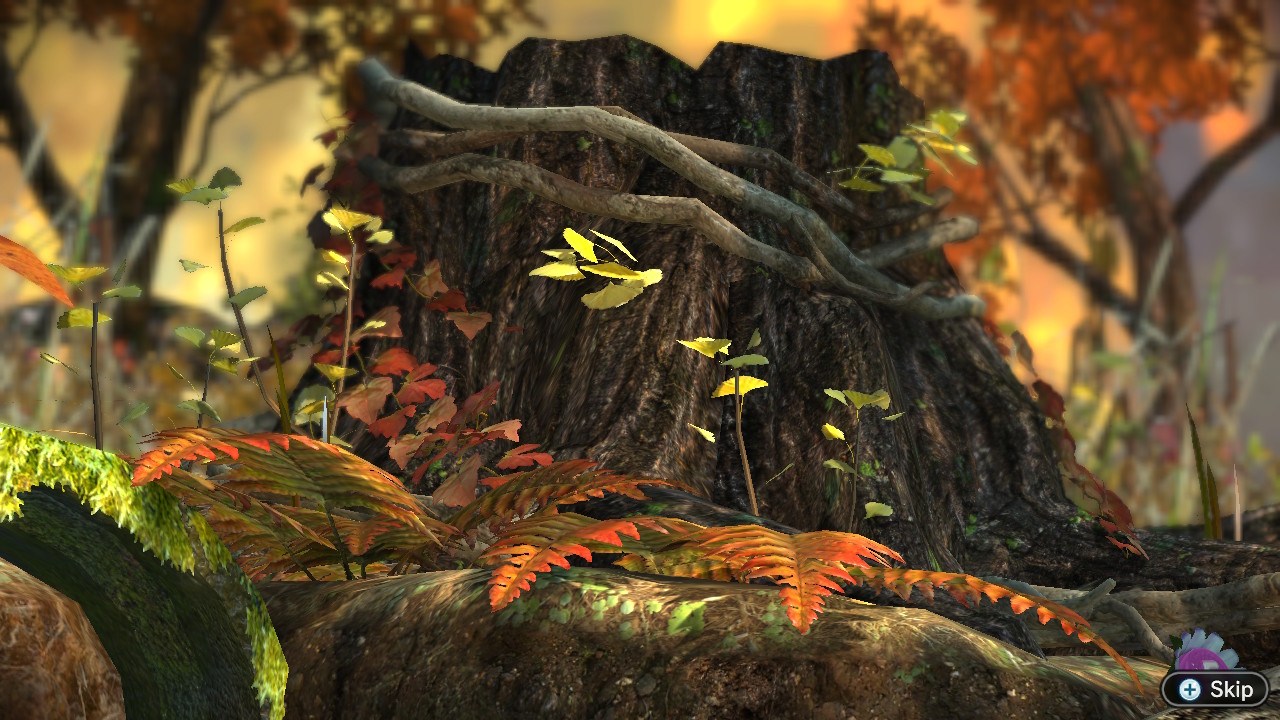 The difficult thing about reviewing a release like this is differentiating between the strengths of the rerelease on its own and the strengths it draws from the original game. The original Pikmin 3 had the snappiest gameplay of the series, a perfect blend of the open exploration of the first game and the claustrophobic caverns of the second, and some absolutely killer visuals. And all of these things are present and accounted for in this rerelease.

So what makes Pikmin 3 Deluxe…well, deluxe? The main addition to the package is the addition of two-player co-op during the main campaign, as well as a new mode detailing the exploits of Olimar and Louie, the two captains from Pikmin 2, all the DLC missions that have been released for the original game, a few extra difficulty settings, and the Piklopedia, a bestiary of all the in-game enemies with notes from all the captains. In addition, the game benefits from the Switch’s enhanced graphical fidelity, making the original HD graphics sparkle even more. 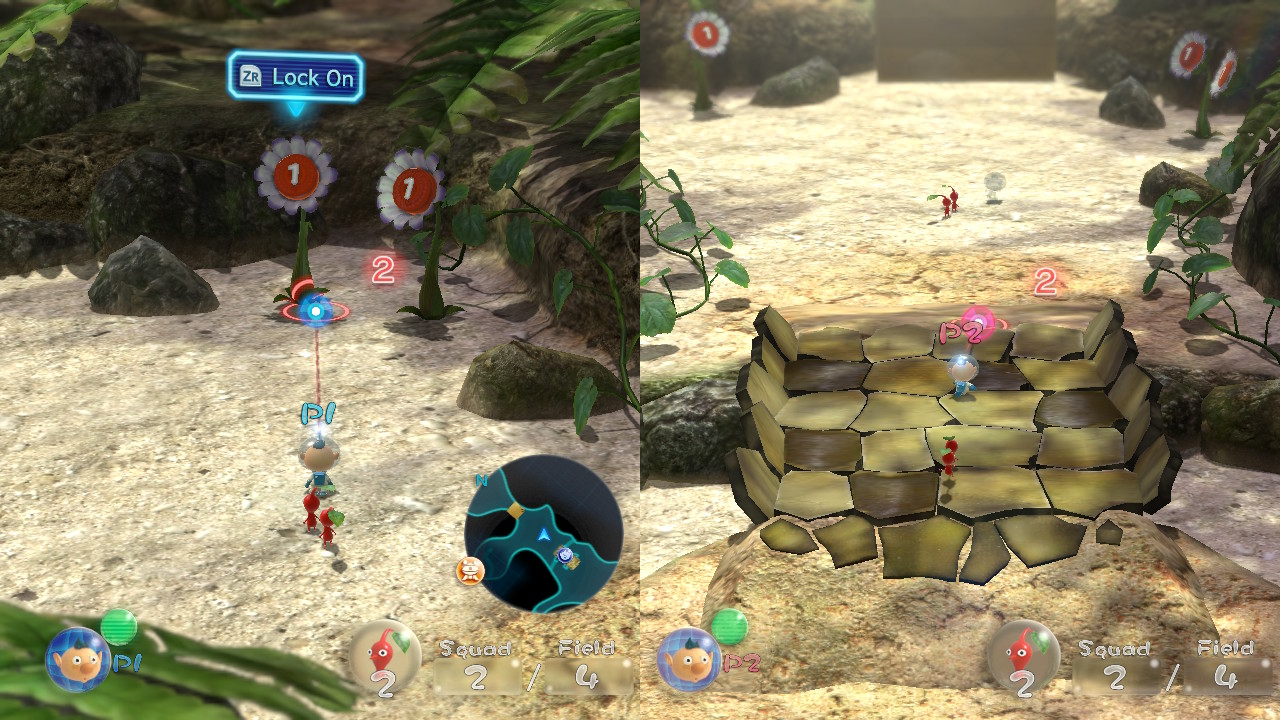 That may sound like a lot, but in practice, I couldn’t help but leave feeling like I wanted something…bigger. After Mario Kart 8 Deluxe gave us a ton of new characters and courses that were previously locked behind DLC, I suppose I was expecting a bit more. Perhaps an extra area to explore, or even a second sub-campaign. And yes, the mission mode has been expanded, but the missions amount to exploring the same areas you do in the main campaign with a stricter time limit. You could make the argument that the Olimar and Louie stages are that second campaign, but they, once again, are essentially another expansion of the mission mode, with the same limited areas and time limits, rather than the expansive areas of the main campaign.

Still, I found myself surprised by just how much fun the co-op in the story mode is. I played through nearly the entire campaign with my younger brother, and we had fun pretty much the whole time. Coordinating your efforts to make the most of the time you’ve been given has always been a key aspect of the Pikmin franchise, and working with another person to make sure you’re getting as much done as you can every in-game day is a blast. The game also allows you to group up into one big squad and split into two smaller ones effortlessly, making on-the-fly strategies and asset management a breeze. 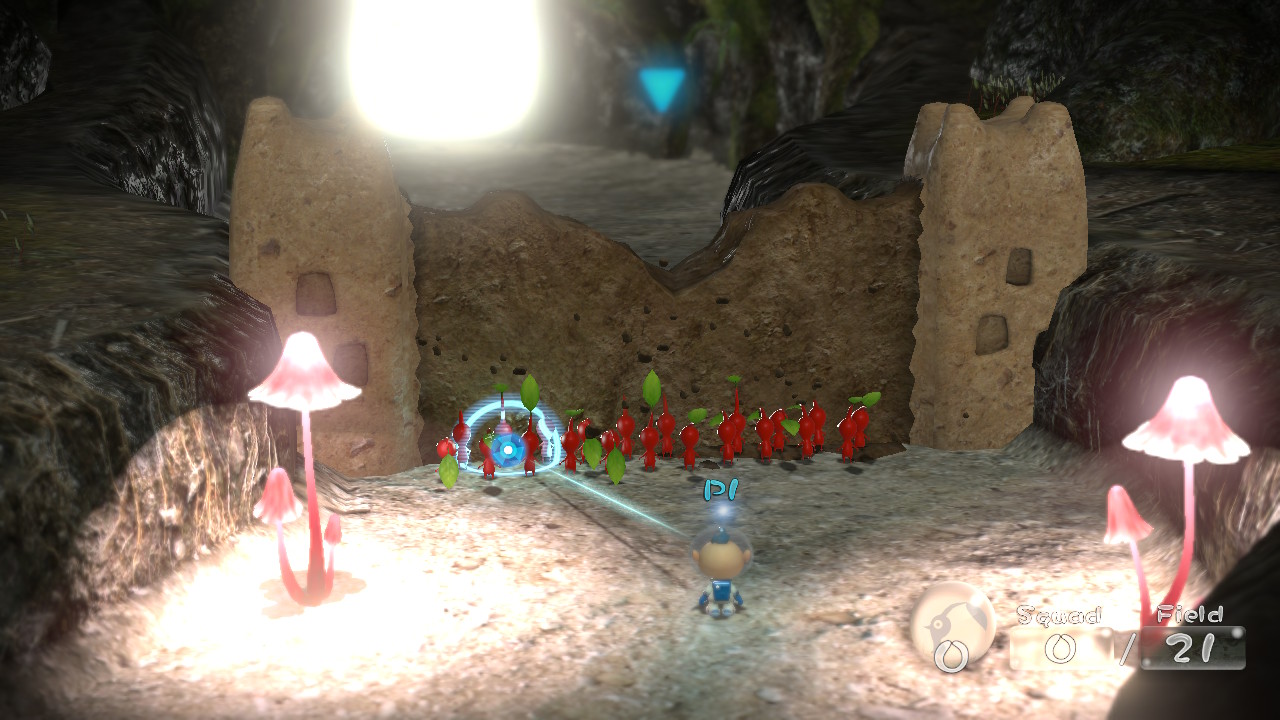 This is also admittedly a very small thing, but I love that the Piklopedia makes a comeback from Pikmin 2. I remember spending an unholy amount of time in the second game just reading through all the notes Olimar and Louie had on the enemies in the game, and the flavor text in this game is just as funny and interesting as ever. Olimar and Louie’s notes on returning enemies are copied verbatim from the original game, but I suppose I can’t blame the developers for using what they had already, and they’ve written all-new notes for the new enemies.

But beyond mere content, Pikmin 3 Deluxe does seek to add a level of overall polish to its predecessor, and it succeeds in that respect. I’ve already mentioned the (admittedly slight) graphics update that the new hardware brings, but I was surprised by how well the control scheme works on a Switch Pro Controller. One of my worries when I initially heard the announcement was how the switch from the Wii U GamePad would go. The game was initially built around that controller, going so far as to design the KopPad, your in-game all-purpose tool, around the actual design of the GamePad. In the original game, your map was always on the screen of the GamePad, and all you had to do was give the screen a tap and you could direct any of your three captains anywhere you’ve previously explored on the map, making splitting tasks between the three of them a breeze. The map in Deluxe isn’t quite as easy to access, but it’s still just a push of the minus button away. This does make co-op rather interesting, as checking the map pauses the game for both of you, so you’ll have to clear it with your partner before doing so (or not, if you want to be a terrible gaming partner). One thing I did miss was the ability to shake the GamePad to send your Pikmin charging after an enemy. I know it’s a small complaint, but there was something so satisfying about being able to send my little army of destruction chugging along with a simple flick of my hands, and a button press doesn’t give that same haptic feedback. Still, the button layout in Deluxe makes a whole lot more sense than the original GamePad layout, as I discovered when replaying the original. Going back took a whole lot of adjustment and a lot of wayward Pikmin tosses. 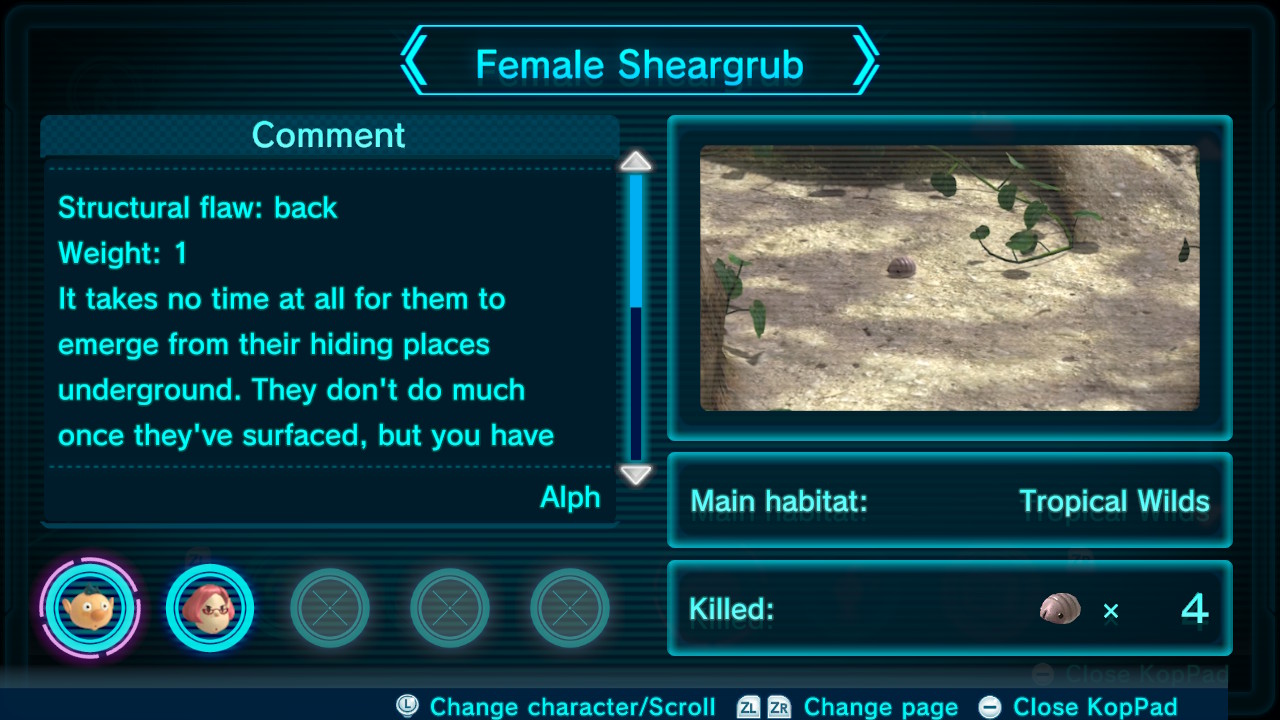 Still, it’s not all improvements. Pikmin 3 Deluxe comes with a couple technical oddities. Several times while playing, my Pikmin all grouped up and just…stopped moving. This is annoying in regular gameplay, and really frustrating when fighting enemies that can take out a lot of Pikmin if you don’t get them out of the way. This isn’t a gameplay feature, at least as far as I can tell, and it definitely wasn’t in the first game. Overall, it’s a really odd oversight given how often it happens.

In Deluxe’s favor, though, I have to say, the original does not run as well as I remembered. Frame drops appeared on multiple occasions even in the short time I played, while Deluxe ran at a crisp rate that would make the Link’s Awakening remake blush. 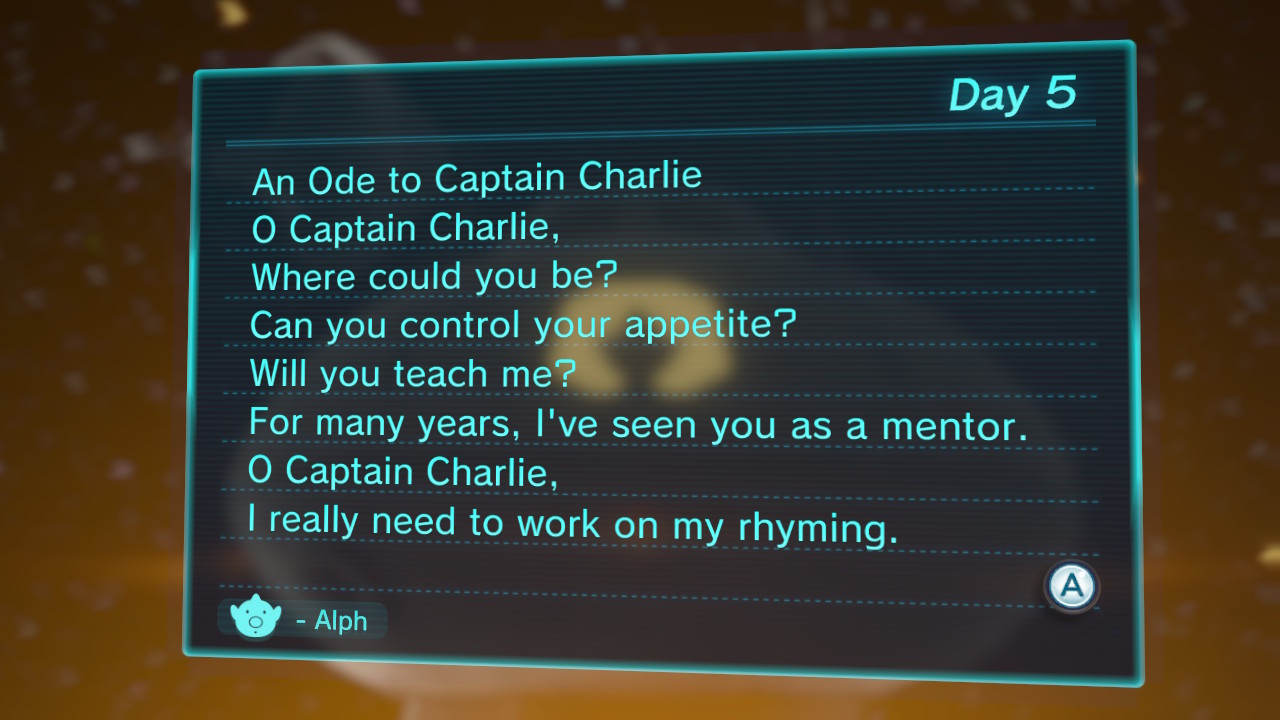 So, is Pikmin 3 Deluxe worth the price? If you haven’t played the original game, absolutely. Pikmin 3 is a must-play, and just about anyone can find something to enjoy in its simple but addicting gameplay. But as a deluxe edition, I can’t help but chafe a little at Nintendo charging full-price for a game that really doesn’t feel all too different from its original release. With Mario Kart 8 Deluxe, we got the base game, plus at least a good $20 worth of DLC, so it felt like paying for a $40 base game. With Pikmin 3 Deluxe, I’m not sure the DLC content that was added makes up for that gap in cost.

The co-op is really the selling point here, at least for me. Sharing this series with my younger brother has been a great joy, since it’s a pretty big part of my own childhood. But whether or not that makes it worth a full $60 price tag, especially if you already own the Wii U version, depends on how you intend to play it. If you’re looking for the best way to play Pikmin 3, this is it, without a doubt. I wouldn’t, by any means, say it’s a waste to pick it up, especially with the handheld capabilities of the Switch. But know that, at least compared to some other “deluxe” editions, Pikmin 3 Deluxe zeroes in on what it did well, which is its base game. And that’s not a bad thing in the slightest.

Pikmin 3 Deluxe's main strength is the incredible quality of the original game, though the lack of many additional features makes the "deluxe" ring a little hollow.