On a reference desk shift at my library job I shared a gander with a coworker at a new book all about the fiercest, creepiest, and most dangerous “monster” animals on the planet. We flipped through pages detailing insects that use dead bodies of ants for armor, and deep sea creatures built to be nightmare fuel. A page turn before the final spread, we were promised a glimpse at the most horrifying monster known to walk the earth. After all these photos of creatures with rows of teeth and disturbing methods to kill prey, we braced ourselves for a picture…

…of a human baby.

The writers of this book make no mention of humanity’s sin condition, yet even the most secular seem to know we as a race muck it up constantly. The book’s particular point was mankind’s careless destruction of nature, but we can look even beyond that toward ro 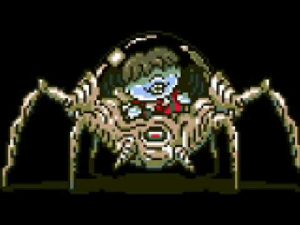 ot issues which compromise our morals. What makes our mortal, monster hearts so corrupt?

For those who don’t know, I’m an Earthbound/Mother nut, and some of the reason for that, I think, is because those games gave us one of the most complex, tragic villains in the video game industry (or at least in JRPGS). Porky Minch is a messed up human being, but his wickedness isn’t like that of villains who create havoc simply for the “evulz.” He is the product of the very real sin nature inherent in us all, and in many ways his fall is even a mirror of Biblical cautions.

1) He is the product of openly sinful parents.

“…for I the Lord your God am a jealous God, visiting the iniquity of the fathers on the children to the third and the fourth generation…” (Exodus 20:5) 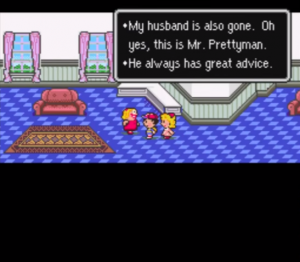 Porky’s home life comes across as clearly dysfunctional. Despite his parents’ wealth and apparent high status, there is so much flagrant greed and cruelty in the home, it’s hard to imagine how Porky could escape taking on monstrous traits of his own. In Scripture we see that the sins of the parents are visited upon the children, and in Porky’s story we see the cycle of familial sin unbroken from one generation to the next. The human condition is in our very genetic makeup.

Porky’s father is straight up abusive (thank you, localized censorship) but even beyond that he influences his family with merciless values and power-mongering. Meanwhile, Mrs. Minch practices infidelity while her husband is away. How would a child raised in a home of such avarice and dishonesty respond to the world around him? Read on…

The pursuit of self at the cost of all else is a primary driving force for sin. For Porky, we see a selfishness already inherited from his parents’ pursuits. This is how he’s been taught to behave. 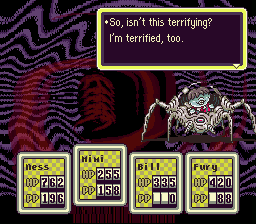 At first, his selfish nature shows in small things—empty threats, cowardice in a fight, and blaming others for his responsibilities. As Ness leaves to adventure into the wider world, the player may forget this punk neighbor kid and his penchant for wasting battle turns. At this point, he’s no more than a bully—broken, but not corrupt.

Until you come across him again…and again…and each time he’s seeking just a little more approval, a little more power, a little more recognition. At the end of Earthbound, he’s in the service of complete corruption itself in the form of Giygas. This amount of unadulterated evil terrifies even him, but by now he’s too entangled in his desires to break free. And in bondage to that evil…

3) Selfishness leads to his ultimate depravity.

“For where you have envy and selfish ambition, there you find disorder and every evil practice.” (James 3:16)

By the end of Earthbound, Porky is still at large, and over countless years he becomes warped by his own maniacal egotism (and abuse of time travel because, hey, this is a work of fiction). In Mother 3 we confront him and discover the result of an eternity of unchecked human depravity. 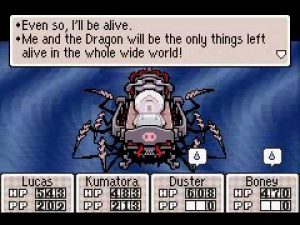 Porky has no heart for others. Everything is abused for his personal amusement. In the end, his egotism leads him to boredom and eventual emptiness, and in an extreme that’s proper for any JRPG, he decides to create a void where all others people are destroyed. He seeks only after himself, and is met with meaninglessness. Haven’t we also seen this in the reality of humankind?

For most JRPG villains—the ones who are evil for evil’s sake—I don’t even pause to obliterate their hit points. With Porky, I hesitate. The difference? I feel every extreme for Porky: hatred, pity, guilt, empathy, disgust… His depravity is a window into the sins I despise in my own heart. He is a villain of the closest variety: fallen, like me.

In the Halloween season, we dress up, we put on masks; but there’s no hiding the monster in us all. Thankfully, we have a Savior who sees it all and loves us the same. He is the Way to a life of meaning and value. Even if Porky didn’t have that recourse, we always will.