Preview – A Long Way Down

A Long Way Down is a deck-building, RPG, roguelite game that was recently released on Steam Early Access. The game comes from Seenapsis Studio, based in Angers, France, who wanted to create an experience that meshes together the likes of Hand of Fate, Darkest Dungeon, and Slay the Spire. I have spent a good amount of time with it, having played through the tutorial and the first world. So far, it’s an amusing challenge, but has a few kinks it needs to work out before it can accomplish a successful release. 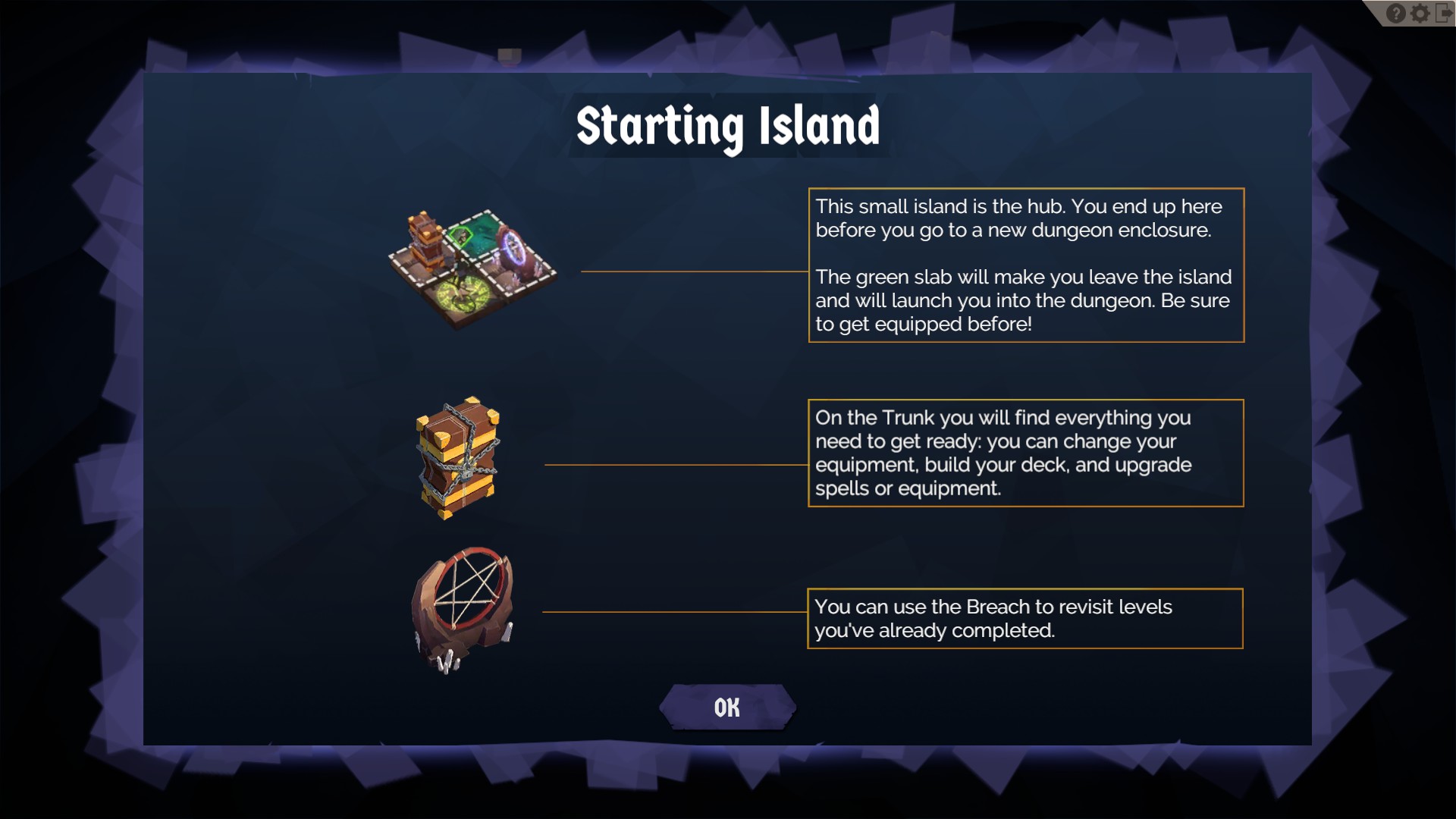 The tutorial is helpful and not so annoying that it slowly guides you through gameplay.

The game begins with Sam, the main character, falling into Limbo. It seems that he has become trapped there and now must use cards to fight his way through this puzzling purgatory and free himself from the grasp of the mysterious Dungeon Master, all while solving the mystery of his death. Along the way, he will encounter two friends, an Egyptian woman and a Roman warrior, both who, like Sam, have come to an unfortunate and untimely demise. 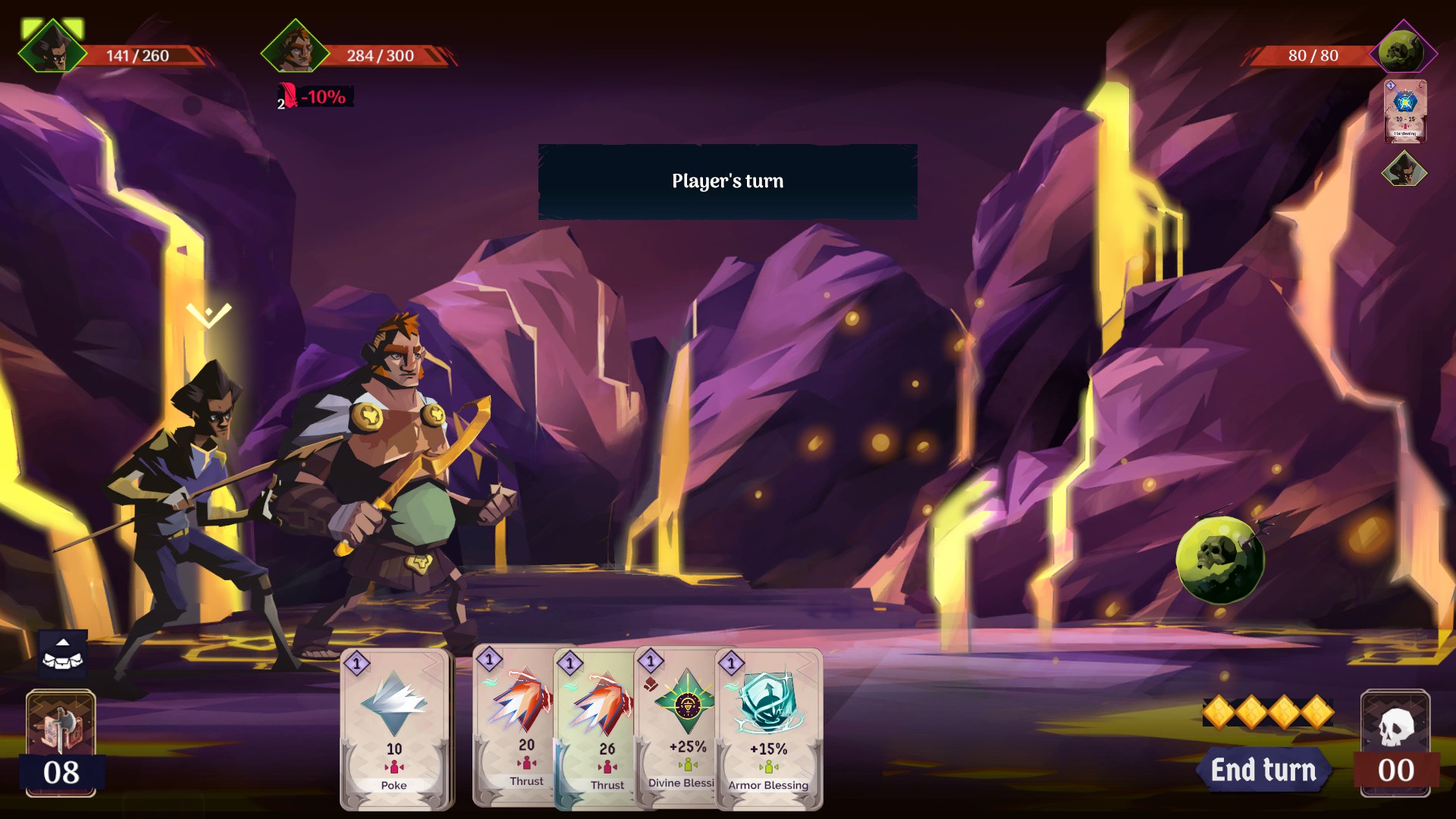 Friends have different stats and different attack cards for added strategy and variety.

Gameplay is easy to understand and involves building your way through the map. Each level has a specific mission, which is typically associated with defeating enemies or bosses. Adversaries are stationed all along the map, but are all separated by tiles. Sam draws tile cards at the beginning of each turn and has three actions to either place a tile down onto the board or move around the map. In this way, the player can dictate where to go and how to strategically avoid enemies to reach chests and heal points. Certain tile cards allow the player to set up a campfire (used for healing), increase rewards from enemies, or destroy a tile all together. There are plenty of other special tiles that pop up in Sam’s deck, making for some good variety, but still maintaining that degree of chance that comes with deck-building card games. 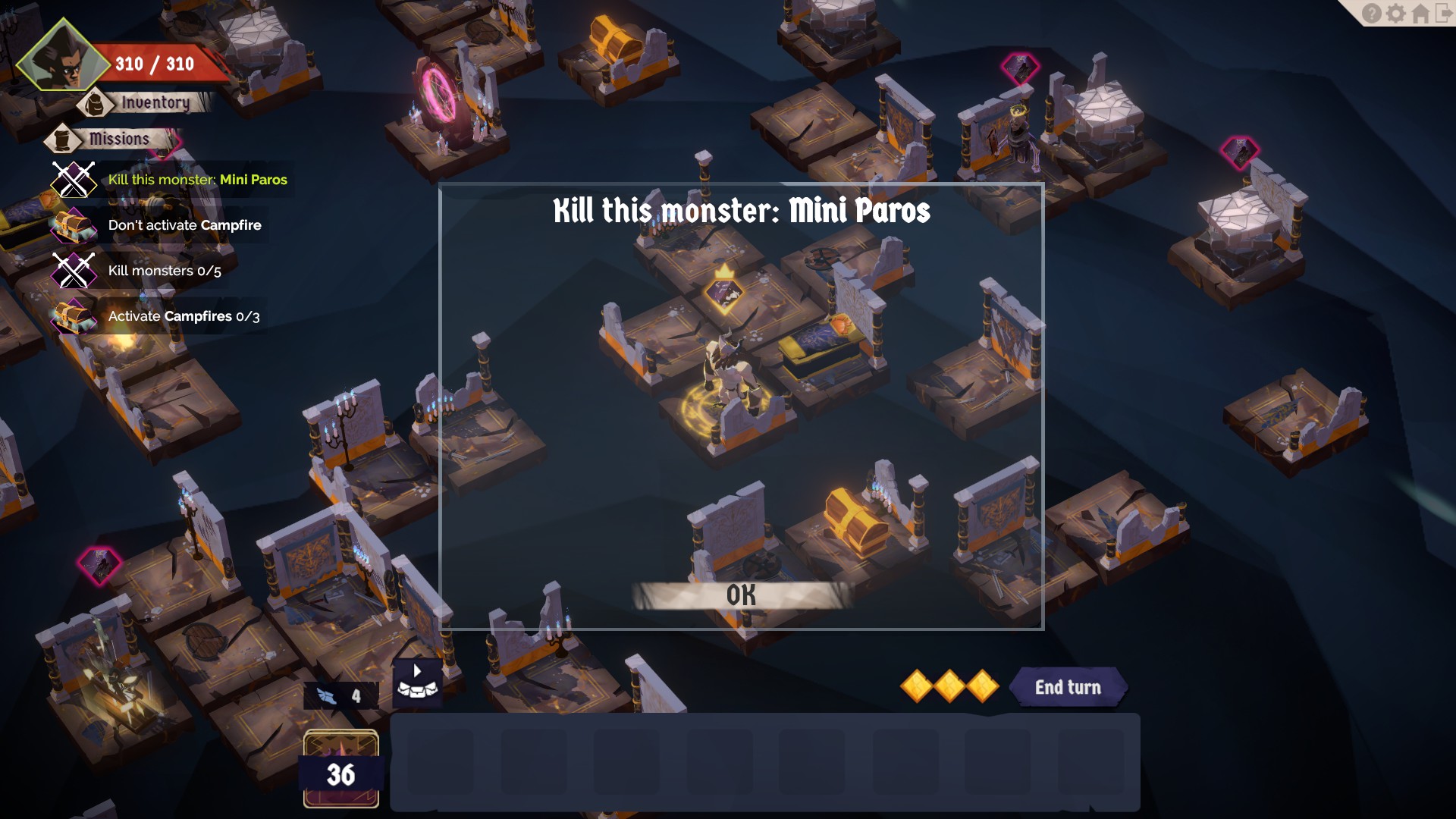 An example of tile gameplay

Movement and tile placement are turn-based, allowing Sam three actions before the enemy takes their turn. The Dungeon Master can use any one of Sam’s current hand of tiles, thwarting the player’s current plan. I do not recommend leaving any valuable tiles available in your hand, as the DM will use it to the enemy’s advantage. I enjoyed this, as it kept me on my toes and did not give me a chance to get bored or let my mind wander too much. It’s a clever way to keep the player engaged.

The true RPG mechanics show up in combat, run solely using cards. At the beginning of each dungeon level, players can choose the contents of their combat decks. Each world contains different monsters with different strengths and weaknesses, so it may take a few deaths to figure out the proper deck to deploy with. The variety of combat cards is vast and typically revolves around three attributes: buffs, debuffs, and attacks. Enemies have different abilities and the game shows the player what attack card the enemy has in their possession. Players should plan accordingly. 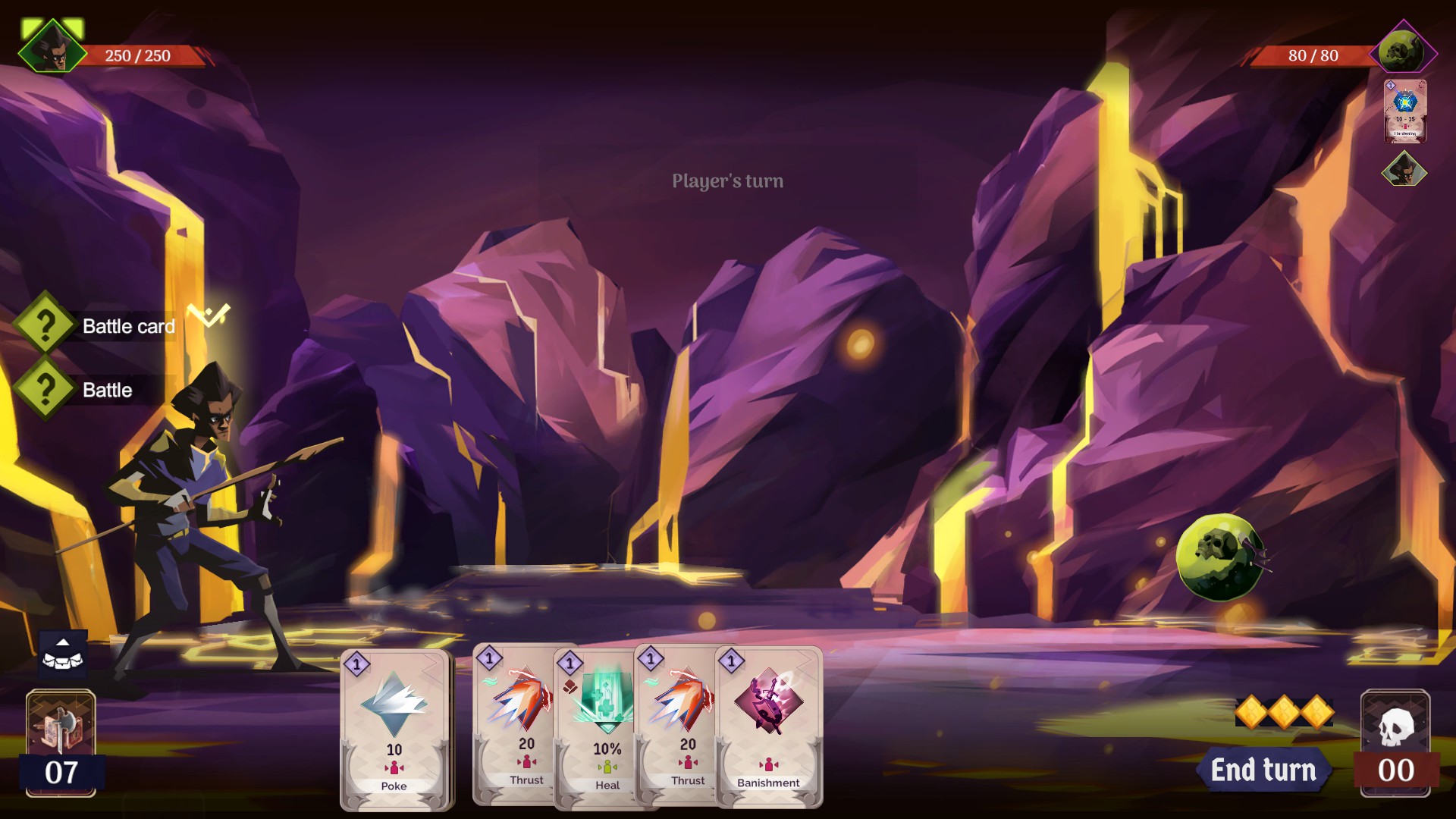 You can view the enemy’s attack card in the top right.

Combat is animated and each card has a different action. The art style and sequence reminds me of the setup of Darkest Dungeon, with the player’s team on the left side-by-side and the enemy team on the right also side-by-side. When a card is played, an animation will take place and the action will take effect. Some of these clips are buggy and skip frames, making it look choppy and messy; a factor that should not be in the final product.

As of now, there are two main music tracks: one that plays while traversing the map and one that’s for combat. They’re great tracks, but they’re overplayed. I was not happy when I moved on to the second world just to encounter the same exact music. I’m hoping in the final version of the game, there will be more variety as far as the OST.

As is common with Early Access games or games that are in beta, I encountered a few bugs while I was playing. Thankfully, nothing game-breaking happened, but I did come upon a blank screen, which led me to almost reboot the game. Luckily, I found that clicking around the screen a bit cleared it and allowed me to continue. 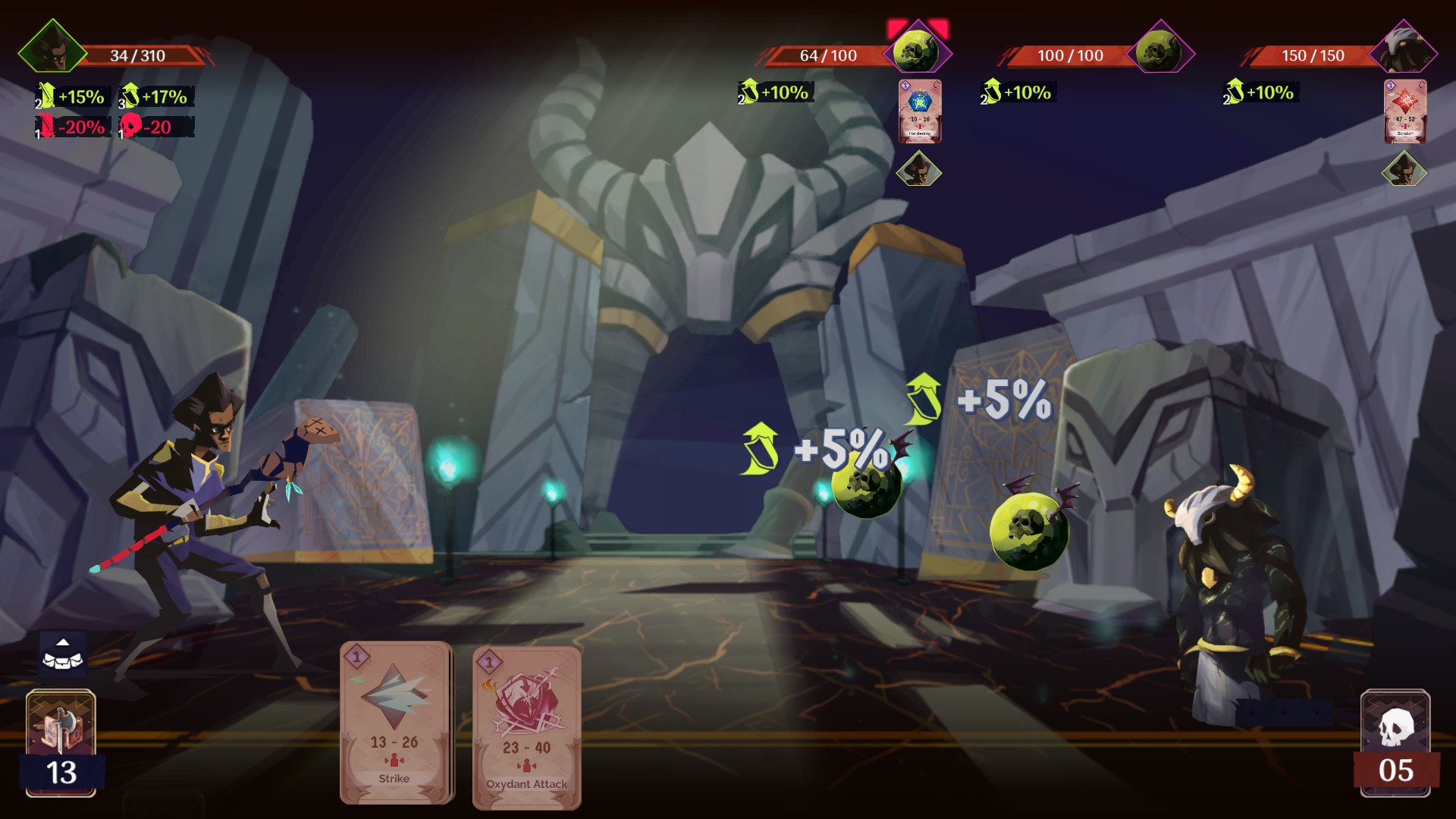 It is important to take out enemies that can curse (debuff) you first so as not to be weighed down by debuffs and be killed more easily.

Aside from all of the improvements that need to be made, A Long Way Down has been a fun distraction so far. I’ve mostly enjoyed figuring out how to survive and keep my health up long enough to reach the boss and defeat it. Deck-builders are one of my favorite genres of gaming and A Long Way Down is new enough to where it does not disappoint. It is intuitive, fast, and fresh enough to provide a new take on deck-builders and maze traversal. It definitely does copy a few things from Darkest Dungeon and Hand of Fate in terms of map layout and combat, but it does it surprisingly well. 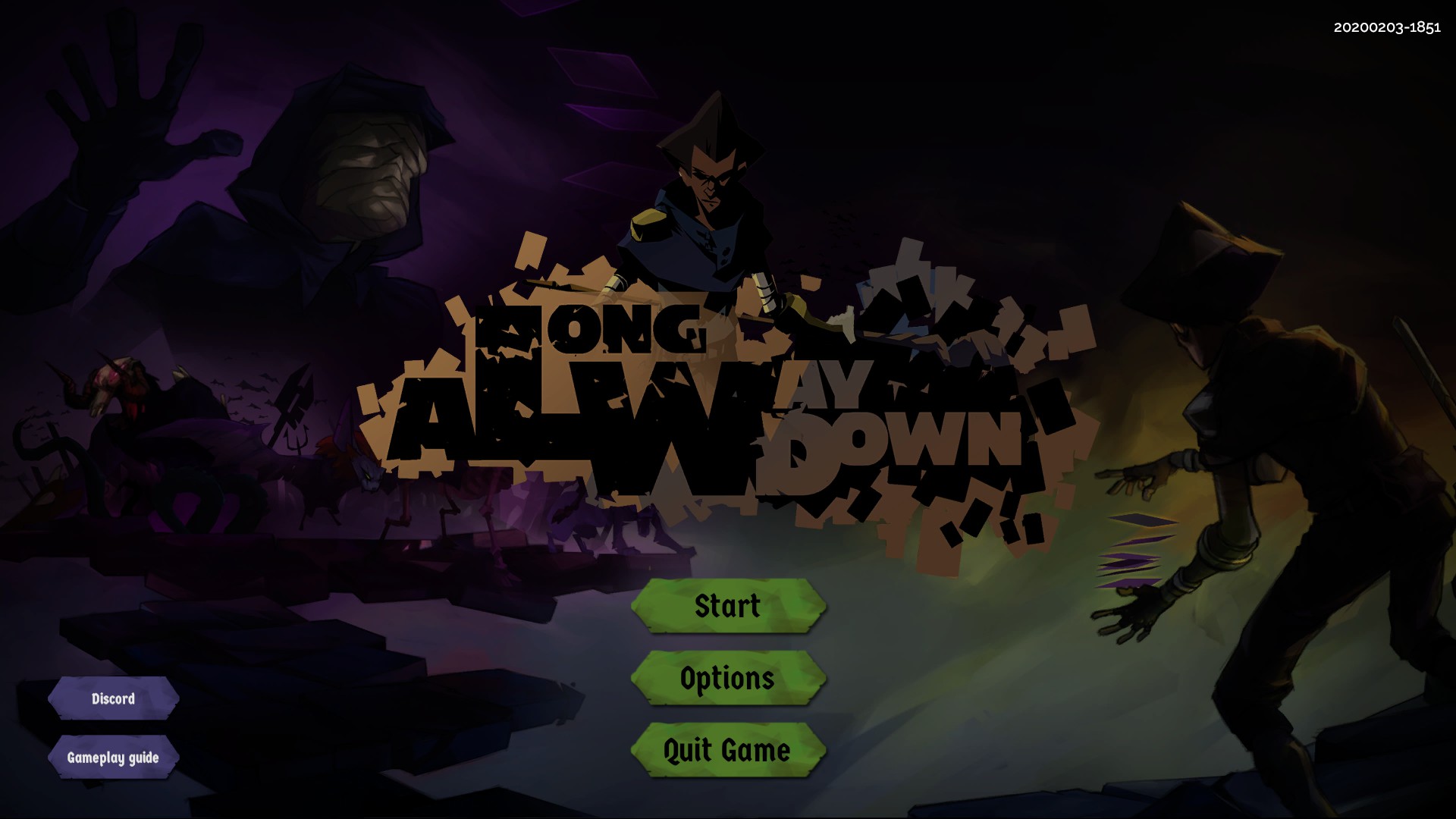 Priced at $17.99, A Long Way Down is more worth around $10 or $12 maximum. If they want to boast that price, they need to make sure the game has enough content and options, such as the ability to choose the protagonist or adding more music variety. But despite the lack of these things, I’m looking forward to playing the final product.