I am a hopeless sucker for games with an interesting gimmick or twist. Certainly there’s something to be said for simplicity and pulling off a classic formula well; all the same, I love to see a game that tries something unique, something to mix up that formula. Backworlds scratches this particular itch in a variety of ways. 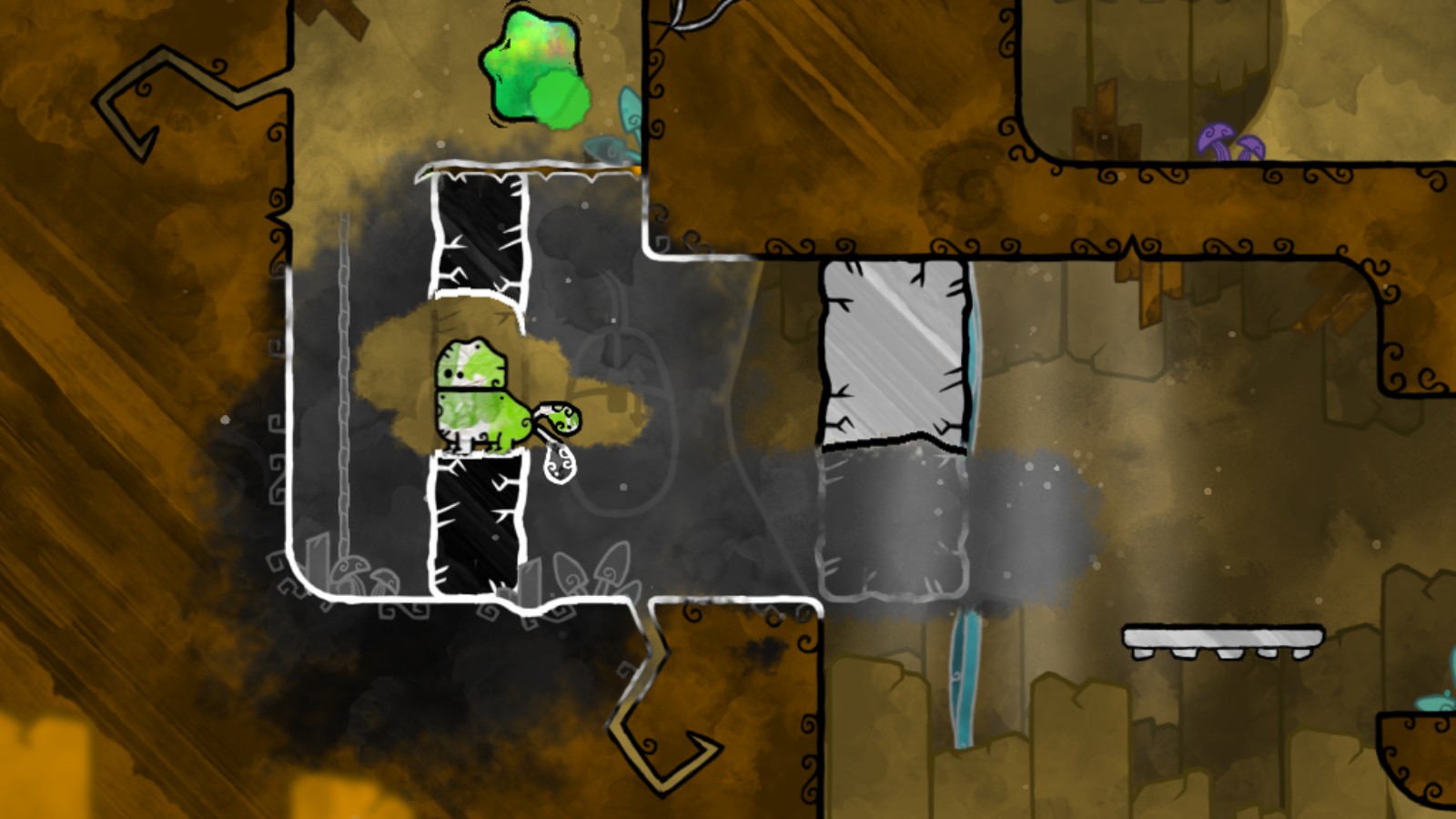 Art and character design is something that jumped out at me immediately. To say the character you control is unique is an understatement. I controlled a four-legged green…thing. It is certainly cute, whatever it is. I particularly like the creature’s two tails; they bounce around while moving in a way that is visually pleasing without being distracting. Perhaps the most interesting aspect of the character is the primary way it interacts with the environment. Not many games can boast a character that can push blocks with its disembodied head. Well, not while being this cute at least. The general style of presentation I find quite pleasing as well. The slightly papery texture to everything gives it a feel somewhere between Paper Mario and Scribblenauts, two games whose art direction I absolutely loved. 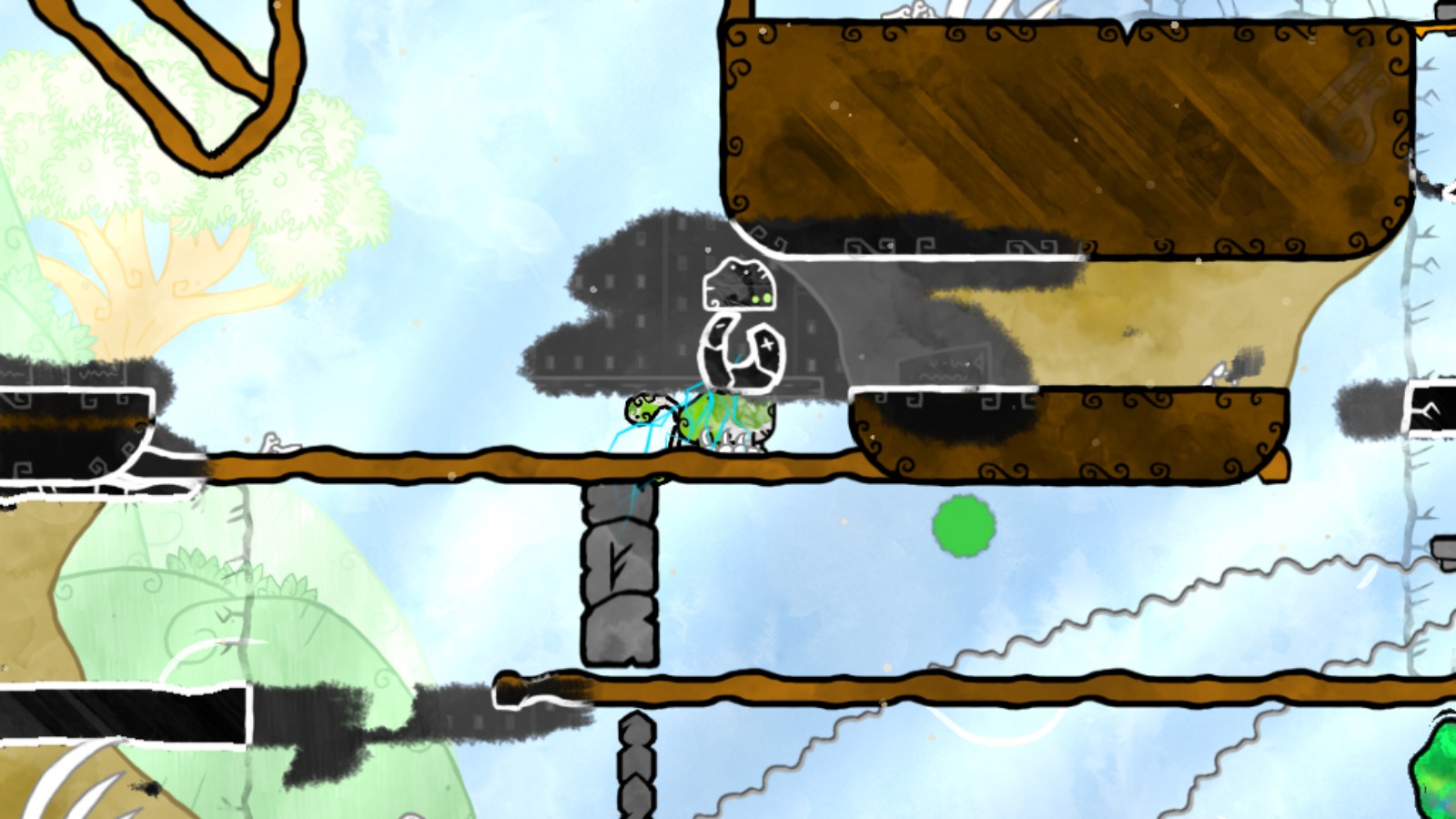 That’s an… interesting way to carry something.

But of course the main draw of Backworlds is its unique mechanic. The game takes place across two visually distinct worlds. The first is a vibrant natural landscape: primarily green, it feels bright and alive. The other is a more artificial world, with buildings and other man made structures, colored predominantly in blacks and grays. It definitely feels like there is a story there, and the fact that the story isn’t clear drew me in.

I transitioned between worlds through a tool much like one I’d have used in MS Paint. By holding down the left mouse button, I could paint over the green landscape with the black one; the right mouse button accomplished the same in reverse. In the demo the main use of this mechanic is to utilize things that only exist in one world or the other. By painting in the right areas, I could create platforms to jump on or obstacles to keep enemies away. Most of the puzzles in the game make excellent use of this mechanic, prompting me to think outside the box more often than not. 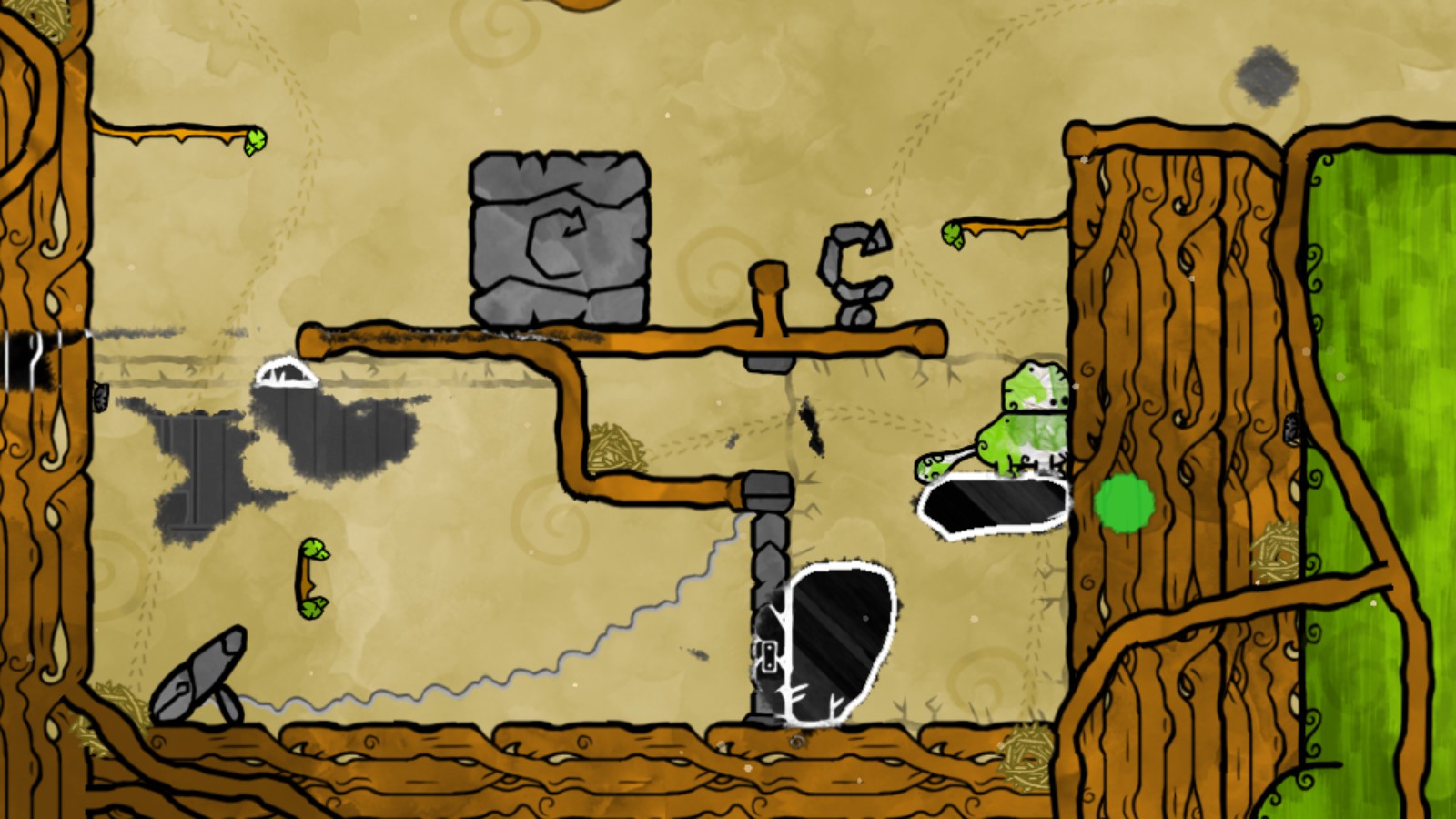 In particular I like the role enemies play in this game. With no health gauge or lives, enemies cause you problems primarily by knocking you or parts of the puzzle you’re solving away. I could use this to my advantage though. One area featured a platform that I simply couldn’t jump to, no matter what I tried; I was amazed to discover the only way to get there was to allow an enemy I’d been avoiding to hit me onto the platform. Making enemies part of the puzzle instead of just an obstacle was an inspired design choice.

It’s also easy to notice the very Metroidvania-inspired map, and I find myself wondering if there might be more to it than simply offering a choice of which direction to go. I love the sense of progression those style of games allow. Being able to come back to previously explored areas with new abilities that open them up further is empowering. I’m not altogether certain how Backworlds would accomplish this without losing the elegant simplicity of its main mechanic, though. 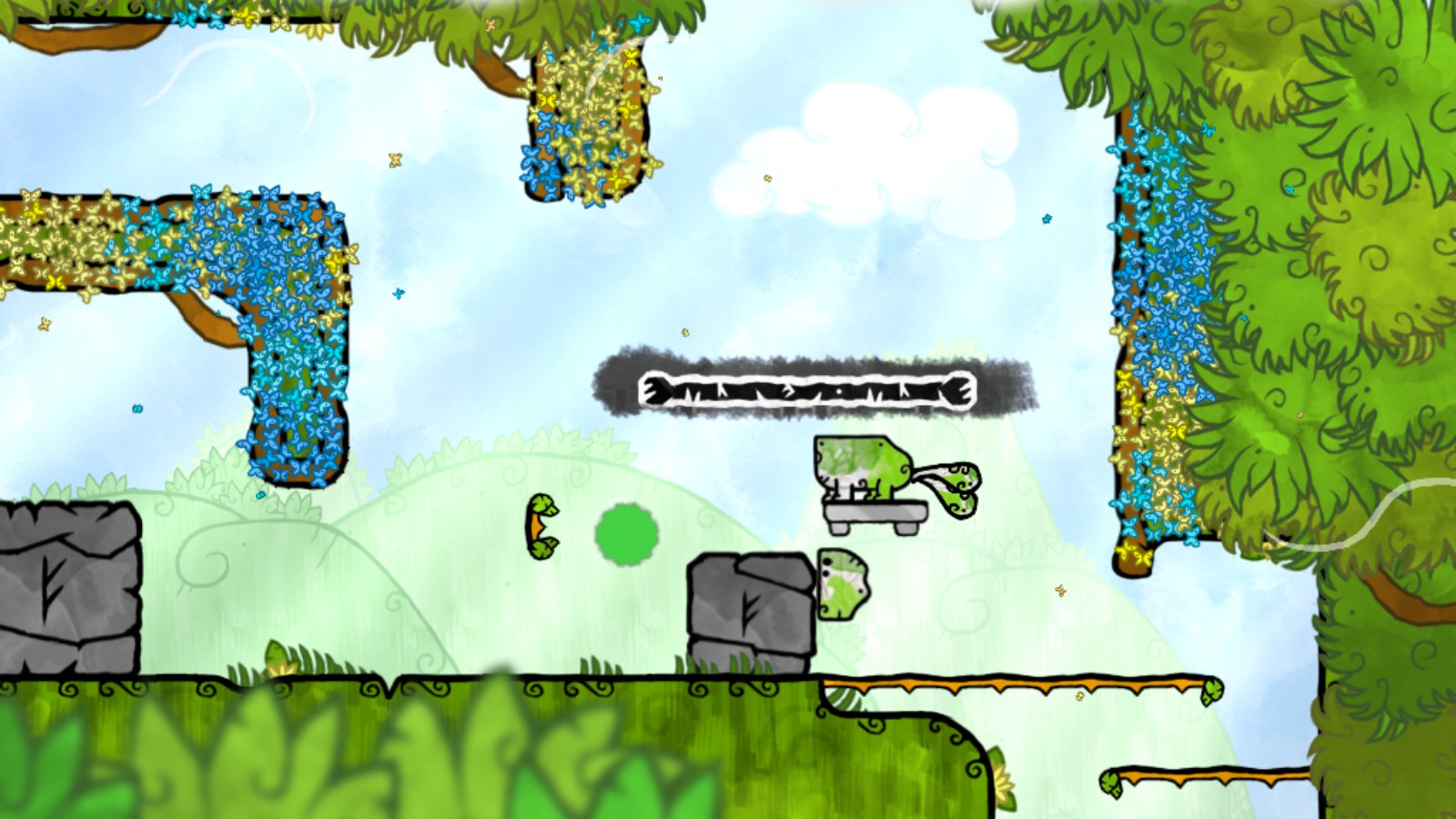 You can’t solve these puzzles if you let yourself lose your head.

The game takes a minimalist approach to explaining itself. This works as both a benefit and potential detriment. On the one hand, as noted before not explaining the world outright makes everything much more interesting. I had many questions that kept me engaged: what was this little creature I was controlling? How was it connected to both these different worlds? And not explaining every little detail of how to play made solving puzzles that much more satisfying.

However since not every detail of gameplay is laid out obviously, some puzzles took a great deal of trial and error to solve. One required me to use a magnet to draw an enemy away from a switch, something the game never even hinted before was even a possibility. This being said, I wasn’t as annoyed with this as I could have been, since I didn’t need to solve every single puzzle to progress. If this is reflective of the final product, this could work to Backworld‘s advantage: making the more obscure puzzles a sort of bonus rather than required for progression could satisfy many 100% completionists who want to feel smart. 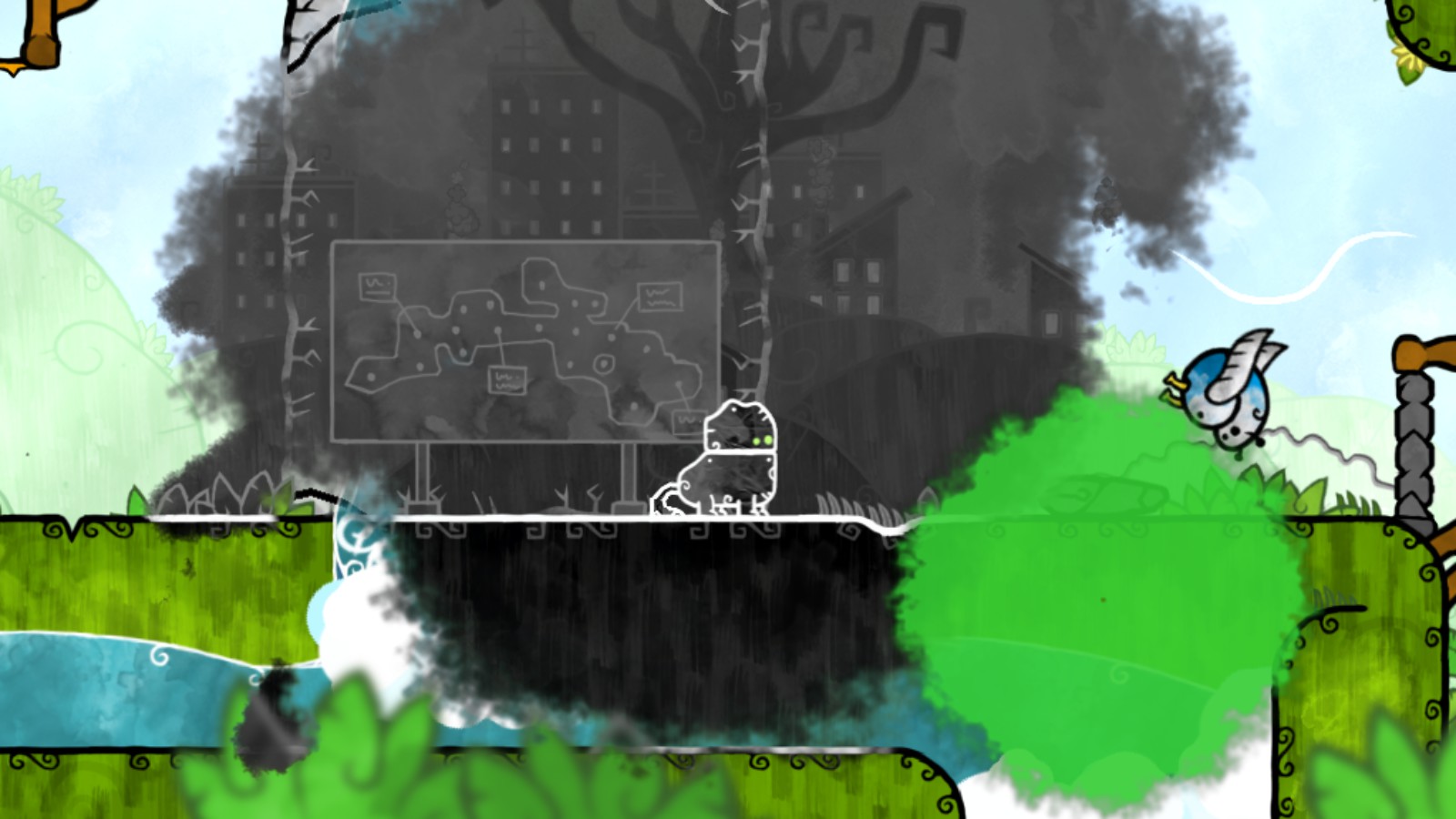 My short time with Backworld‘s demo left me wanting more. The preview video showed many more possible applications to the two worlds mechanic. In one area, water floods one of the worlds, allowing the player to swim to areas otherwise inaccessible. In another, the world’s have opposite gravity to one another, creating new platforming opportunities. For their first game, Logic Embers Limited seem poised to make the most of the idea they’ve come up with. I look forward to seeing what they produce as development of this game progresses.

Preview code generously provided by Game If You Are.