For only the second time in the six years that I have been writing for GUG, I have embarrassingly requested a review copy for a game that had already been on the market for months. The first time was for Door Kickers, which thankfully turned out to be a good, successful game. Recently, I had our PR team reach out and contact the developers at Mirari&Co. to make inquiries about their ongoing project, Dark Light, as it showed up in my Steam Discovery Queue. However, it is not a recent release, but has been in Early Access on Steam since May!

I usually consider that much elapsed time a closed window, but I am glad Mirari&Co. honored my request. For I am fond of their choice of pre-rendered graphics; not only does this decision in art direction provide a nostalgic feel in the vein of games like Flashback and Donkey Kong Country, but methinks they also provide an easier gateway into games development for indie developers. After all, pre-rendered graphics worked for Next Game Level’s Remote Life, and they are now working on a sequel. 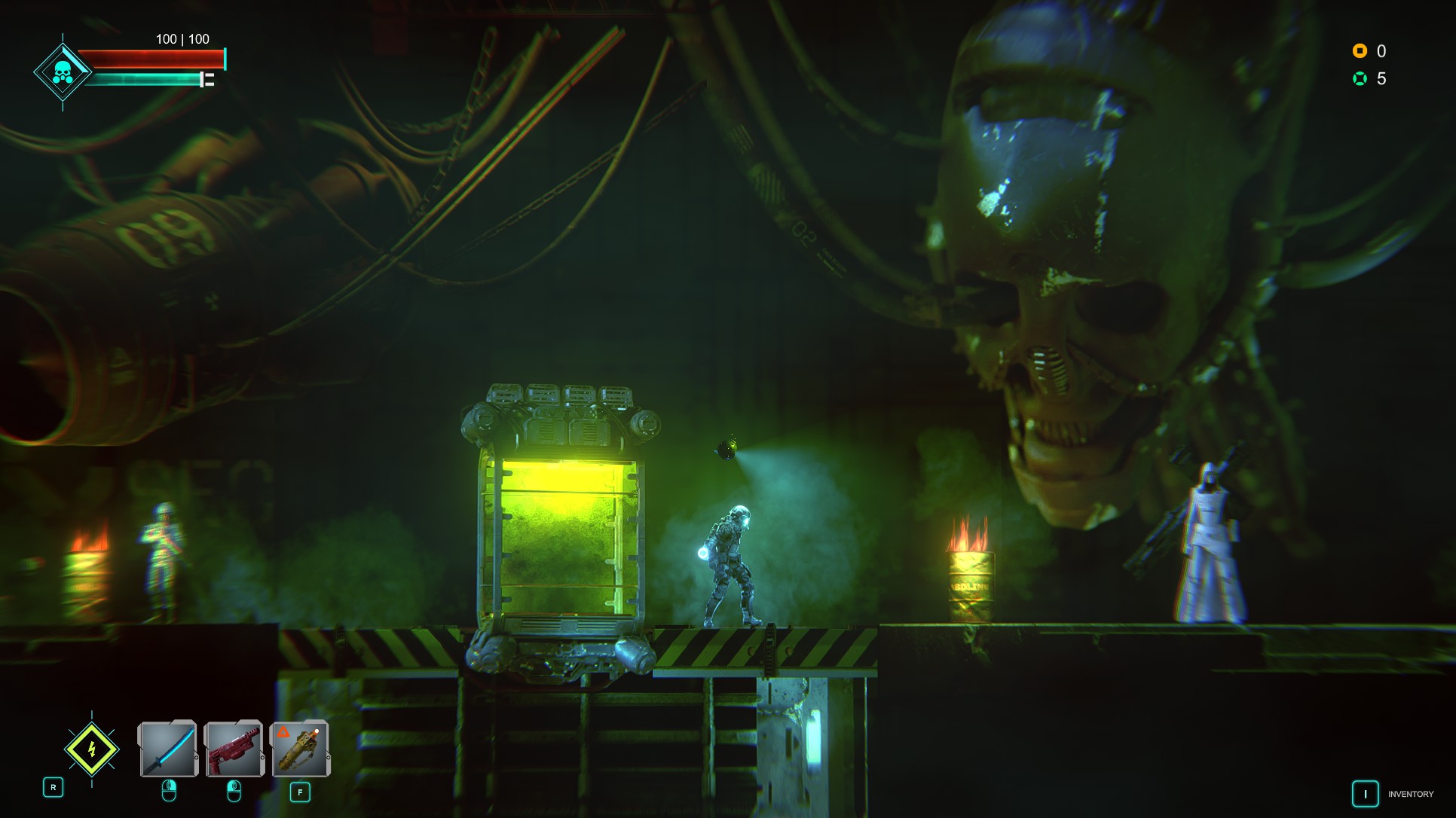 Love the aesthetic, but the edge blur makes for poor screenshots. Luckily, Mirari&Co. have added an option to turn off this feature.

Dark Light specifically caught my attention because of its penchant for sci-fi iconography in cinema. While the cyber-skeletons remind me of the T-800 because of their seemingly stop-motion animations, this jankiness strikes me as disparate considering my commentary concerning how a pre-rendered art direction is supposed to simulate smoothness. Contrastly, I grew both fond and frustrated at the skeleton’s stalking companion enemy.  Invisible, it crawls on four legs and does not reveal its presence until right before it pounces, its camouflage malfunctioning with an animation similar to that of a de-cloaking Yautja. Not to be left behind, an enemy that reminds me of a Xenomorph with a shorter head lurks in the sewers, hunts in packs, and strike with terrifying aggression. 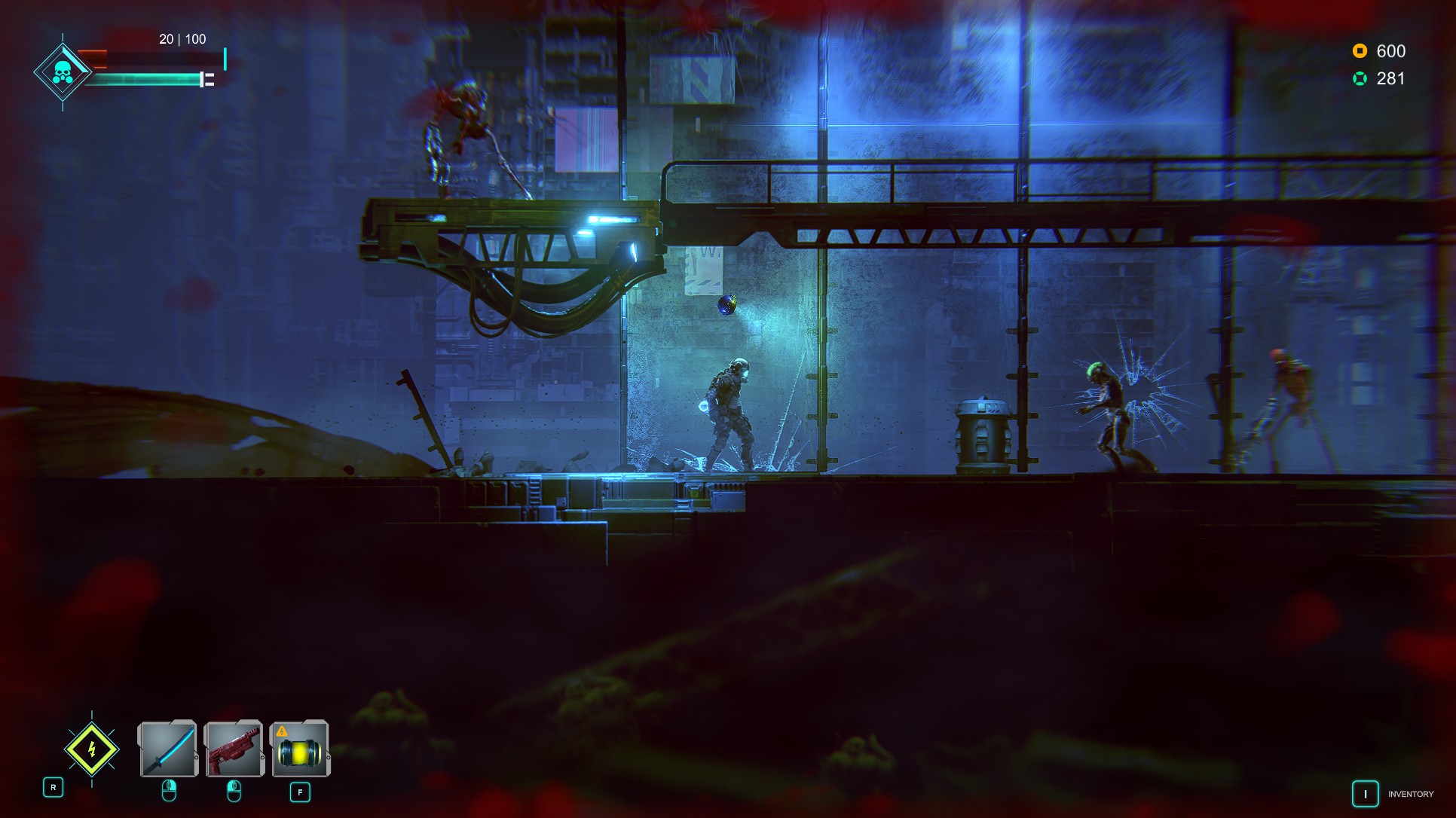 The enemy standing erect is about to pounce, but I can parry the attack. Does such a gameplay mechanic sound familiar?

Actually, all but the first few infested human enemies in Dark Light hit with authority. Mirari&Co. market their game as a metroidvania, and it does at first appear as such in the official trailer; some abilities are acquired over time, allowing players to access areas that would otherwise remain inaccessible. However, I have found that Dark Light more closely resembles Salt & Sanctuary or Death’s Gambit—games that simulate the difficulty of a Demon’s Souls experience, but in two dimensions. Dark Light‘s cyberpunk setting distinguishes it thematically from those 2D Souls-likes, though the playable character, the Dark Hunter, still uses a sword as a melee weapon. 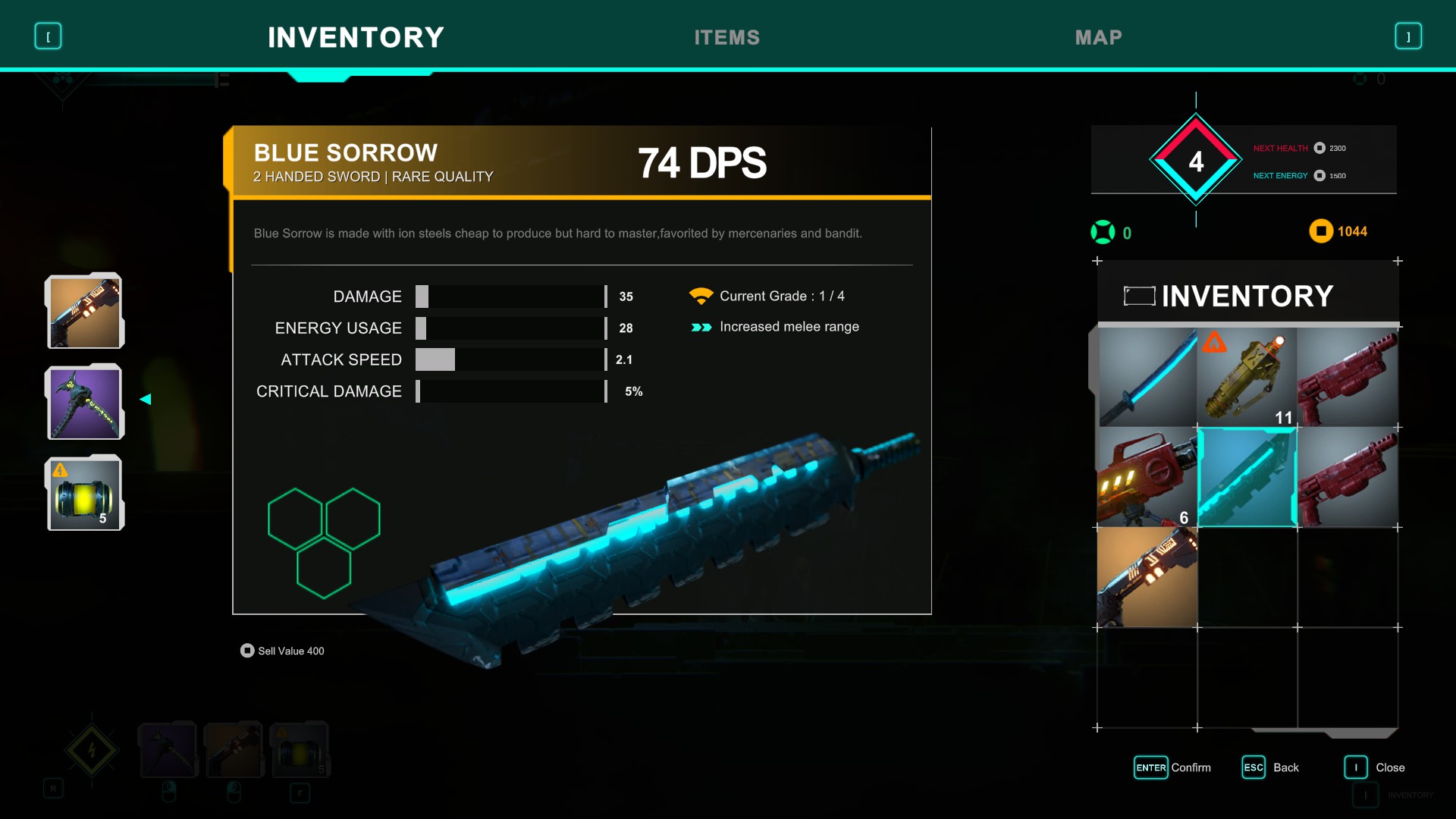 I generally do not care for two-handed weapons because I like the variety that an off-hand weapon brings to the table. But this might be the answer to my boss problem.

To confirm Dark Light’s toughness, at the time of this writing, I have yet to defeat either of the two bosses to which I have gained access. One boss possesses a vomit attack that does enough damage to delete most of my health, ruining my IRL morale, as I look at its health bar extending the length of the bottom of the screen, and I know I do not have the skill to survive. The other boss is a literal tank called the Butcher, against whom I only seem to be doing chip damage. While I understand its attack pattern, I am not consistent in dodging them, and eventually, I lose from attrition. 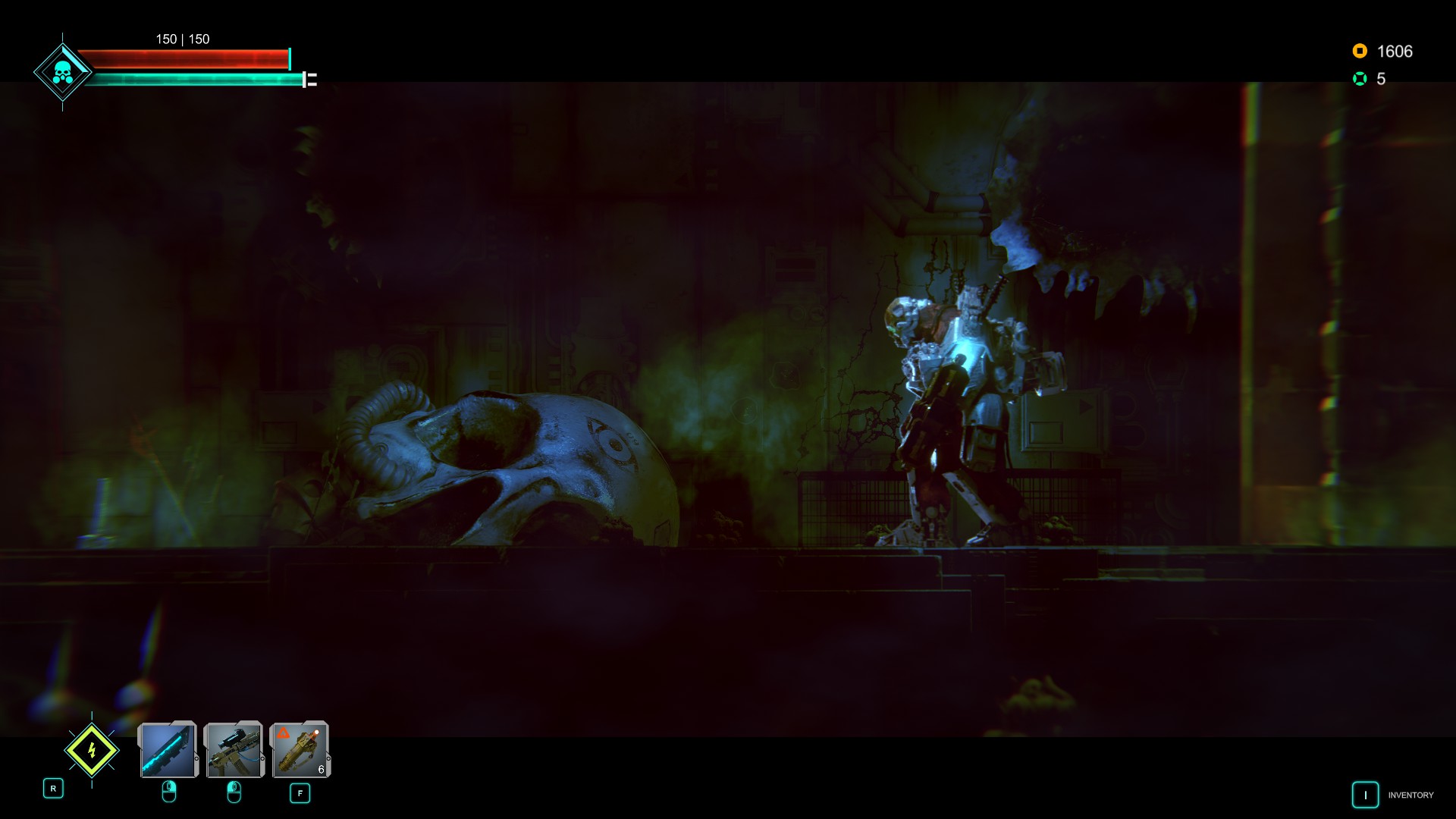 The Butcher is a big boi.

I could consider grinding regular enemies who regenerate after every game save for more experience points and redeeming them at home base to expand my health or stamina bar; the latter controls how often I can dodge or attack before I am forced into a cooldown that prevents me from doing either. Indeed, all of this is very Souls-like—there are even large “red-eyed” typed enemies walking around with swords and boards. However, I am of the mindset that a well-balanced game should not require grinding. I did manage to procure a cool-looking scythe and rifle, both improvements to my base weapons; I then managed to upgrade these new acquisitions, augmenting them so that they might overcome regular enemies with the ease that I would expect with progression. Those bosses, though, are something else! 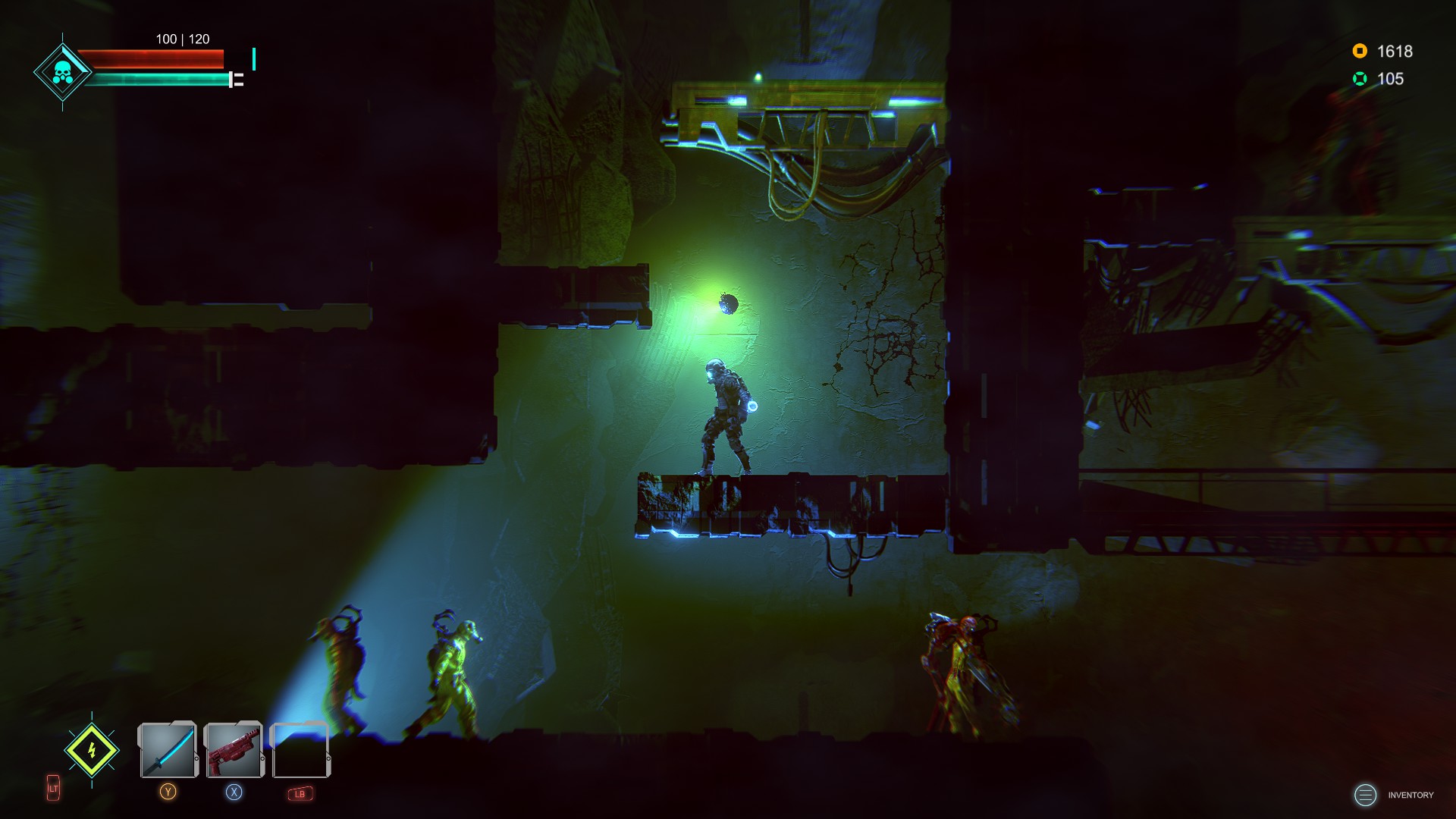 Choose encounters wisely. Here, I do a downward smash attack, roll, cap another in the head, duck the enemy on the far right’s ranged attack, roll again, then slice him in two. Oh, and I have to curb-stomp the parasite infecting him afterward.

I did look to YouTube for hints concerning how to beat either of the bosses, something I rarely do, as I normally just tough things out, but as Dark Light is still in Early Access, I wondered if the problem was the game or if I just needed to GIT GUD. I found one video from six months ago that reveals how someone manages to defeat the Butcher after several tries. Perhaps I, too, need to switch back to the default sword rather than the scythe, and rather than shoot the Butcher, I should save my bullets for the enemies he summons. I just wish that bullets traveled further than twice the length of the Dark Hunter. 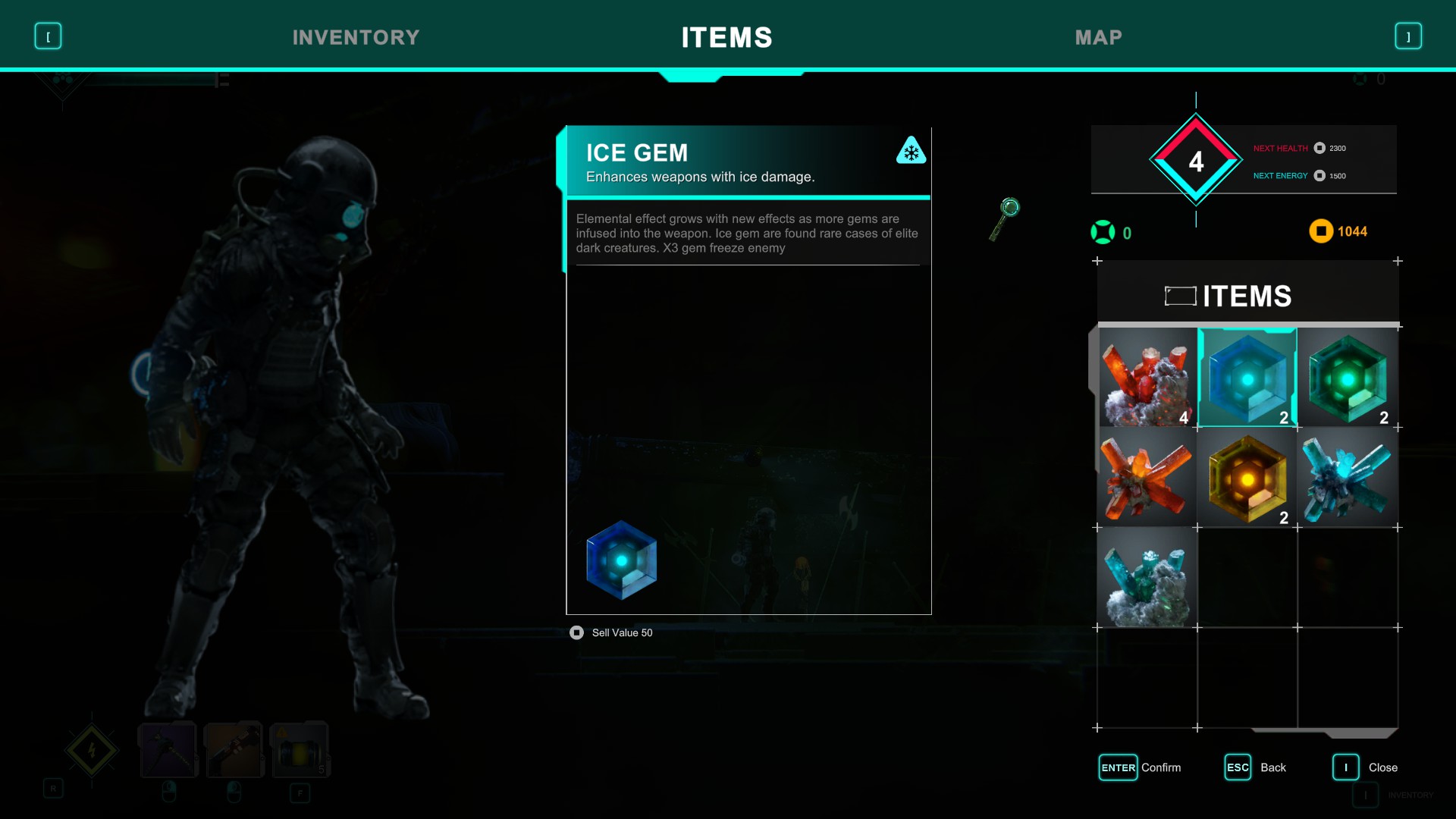 Of course I only have two of each elemental power-up instead of three of any of them, which is what I actually need.

The fact that I am even willing to consider a new strategy to return to Dark Light speaks to its appeal and potential. It would appear that the game, in Souls-like fashion, allows for some non-linear progression, because the second, big-damage vomit boss is in an entirely different location. I reckon I can concede that Dark Light satisfies its metroidvania aspirations in this way, and I look forward to making more progress.