I missed out on the Rock Band movement that took over the previous decade. Newlywed, I was somewhere between too broke and funneling money into extra Wiimotes and nunchuks to heavily invest into periphals for the PS2, especially when the PS3 was already a thing. I did manage to catch Guitar Hero III on the PC port thanks to eBay. I also purchased Guitar Praise, but never got around to playing it.

Guitar Hero III reminded me of rhythm games from days of yore, such as Parappa the Rapper, or especially Bust a Groove. Developer Headbang Club, likely inspired by such games, including the popular Bit. Trip series, is offering something significantly more hardcore than all of these games that I have mentioned thus far. Double Kick Heroes, its name derived from the usage of either two bass drums in a set or a double pedals on a single bass, is a game designed to rock the socks right off anyone who dares to play it, even with shoes still intact! 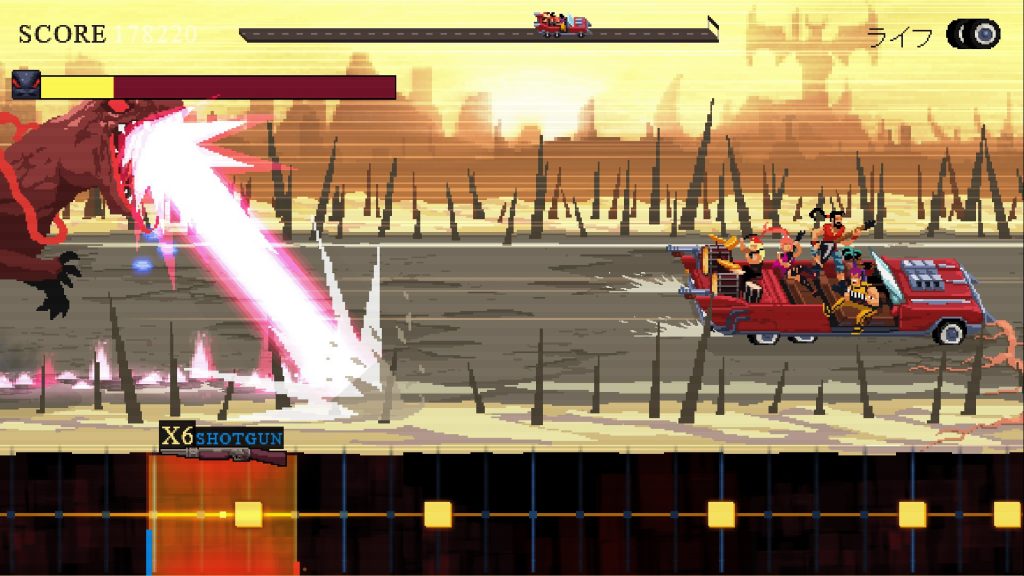 Despite Double Kick Heroes being an Early Access game on Steam, if we were still in the 16-bit days, this game would be considered complete. It currently features twelve stages and songs spread between three chapters in the story mode, in addition to several bonus chapters worth of stages and music. Headbang Club vows to double the content by the time the game “goes gold” for full release in six months by adding at least a dozen more songs. Though the music in this game is comprised primarily of music that lacks lyrics, or the lyrics are nigh indecipherable, by comparison, there are more songs in this game than either Parappa the Rapper (6) or Bust a Groove (10-14).

Anyone capable of hitting the arrow, left shift, and left control keys to a beat is capable of playing this game. Even the musically challenged need not fret (SEE WHAT I DID THERE?), for there are enough difficulty levels here so as to not scare anyone away. I selected the middle difficulty, Metal, because while I have never played in a band, I am a musician who understands topics of tempo and beat. The idea is to alternate the base weapon, the bass, as the beat indicators scroll through, to shoot the infected as they pursue the band’s gunalliac. Should they reach the car, the band sustains damage. Miss too many beats, and the bass overheats, allowing the horde to catch up. After too many hits, it is game over. 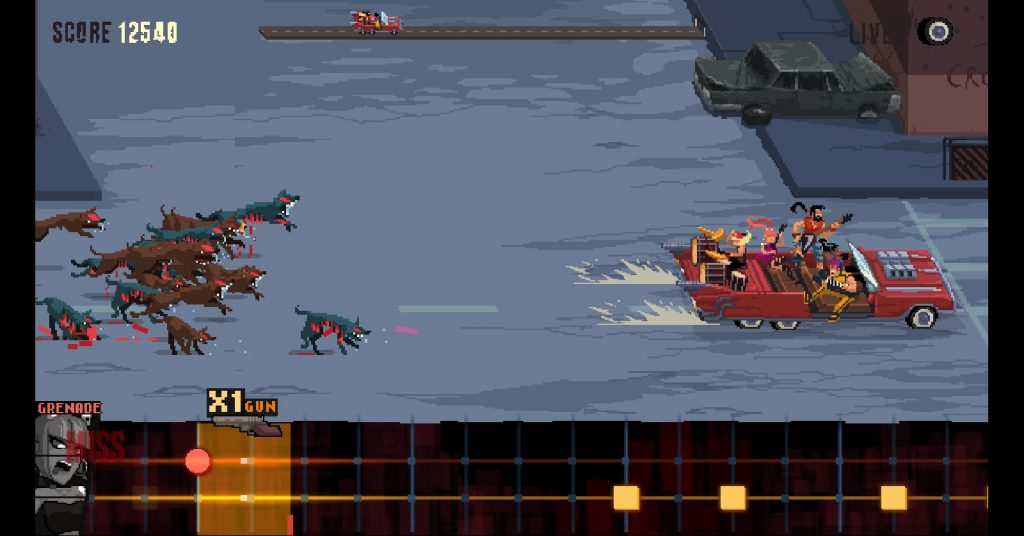 Animals WERE harmed in the production of this preview.

There is a story, but there is little to be found here beyond what one would watch on an episode of TMNT…from the 90’s. Derek his high is energy when on drums, but lethargic and aloof when not playing. Snake, I think, is the tech tinkerer. Randie is a homophone for “randy.” Lincoln the no-nonsense leader, and driver of the gunalliac used to shoot down the ravenous infected. James is the lead guitarist, but I do not have a good grasp of his role on Double Kick band beyond that. 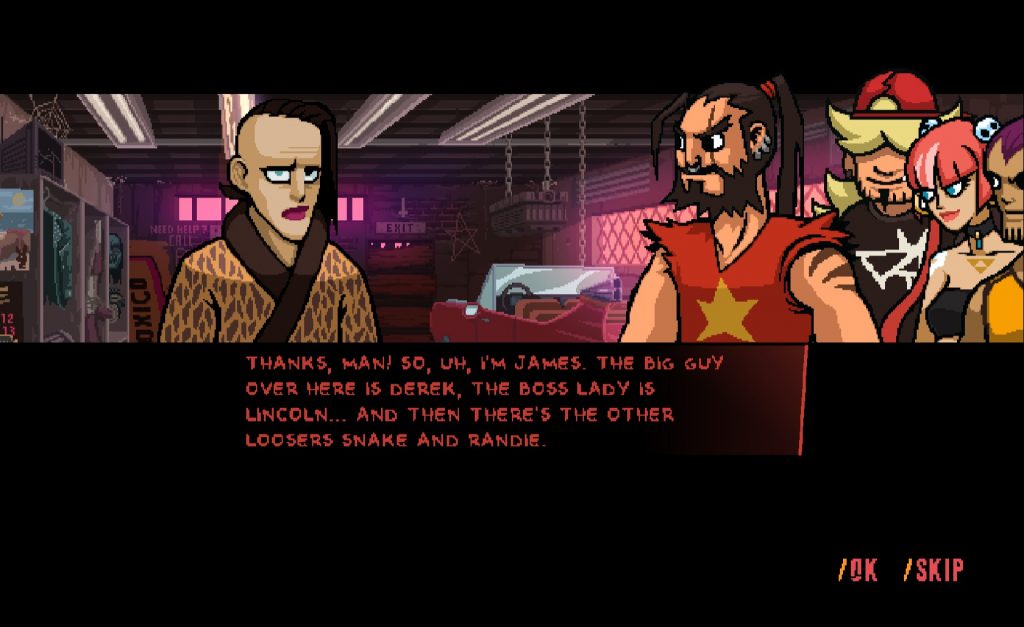 Cameos by some rock stars that one may, or may not, recognize.

So far, there is not a single song that I loathe, but I believe that some are more challenging than they should be. On two occasions, I lowered the difficulty on a song that had stomped me, and I could hardly tell the difference After barely winning on the lowest difficulty, I would turn it up back to where the difficulty was previously, and could hardly tell the difference. In other words, the balancing on a few songs could use some tweaks. 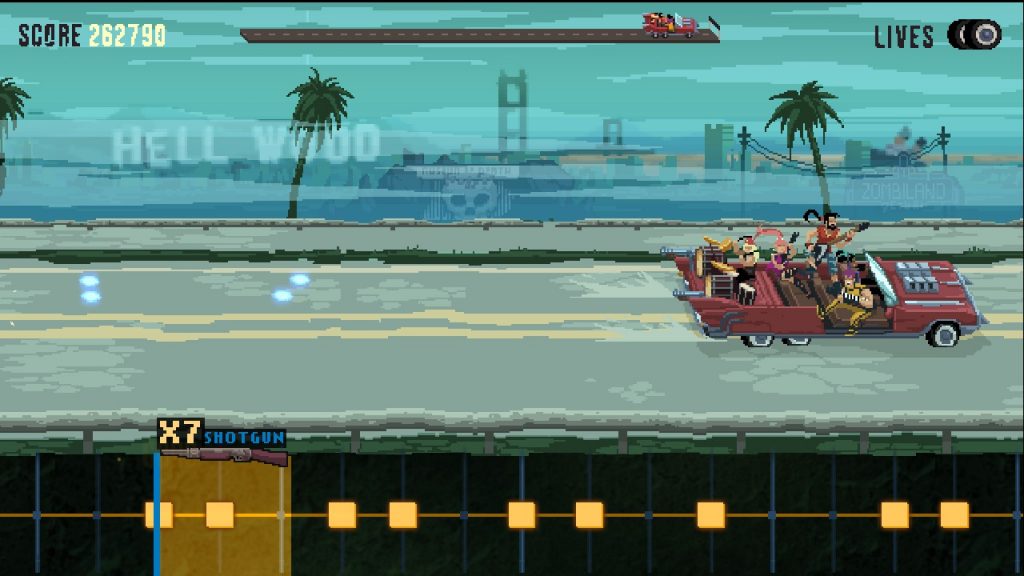 Stay on beat to maintain a stronger weapon to delay the horde.

Double Kick Heroes is a game that fully embraces the stereotypical aspects of rock culture, or merely displays them in grandiose satire. Either way, players should prepare themselves for plenty of crass language, flipped birds, and pentagrams as they travel from coast to coast to investigate what caused the infection. Thankfully, the dialogue is skippable, and it is entirely possible to focus exclusively on good music that Double Kick Heroes has to offer. In between all the AAA releases thus far in 2018, the simplicity this game has to offer can serve as an engaging reprive.