Preview: Down to Hell 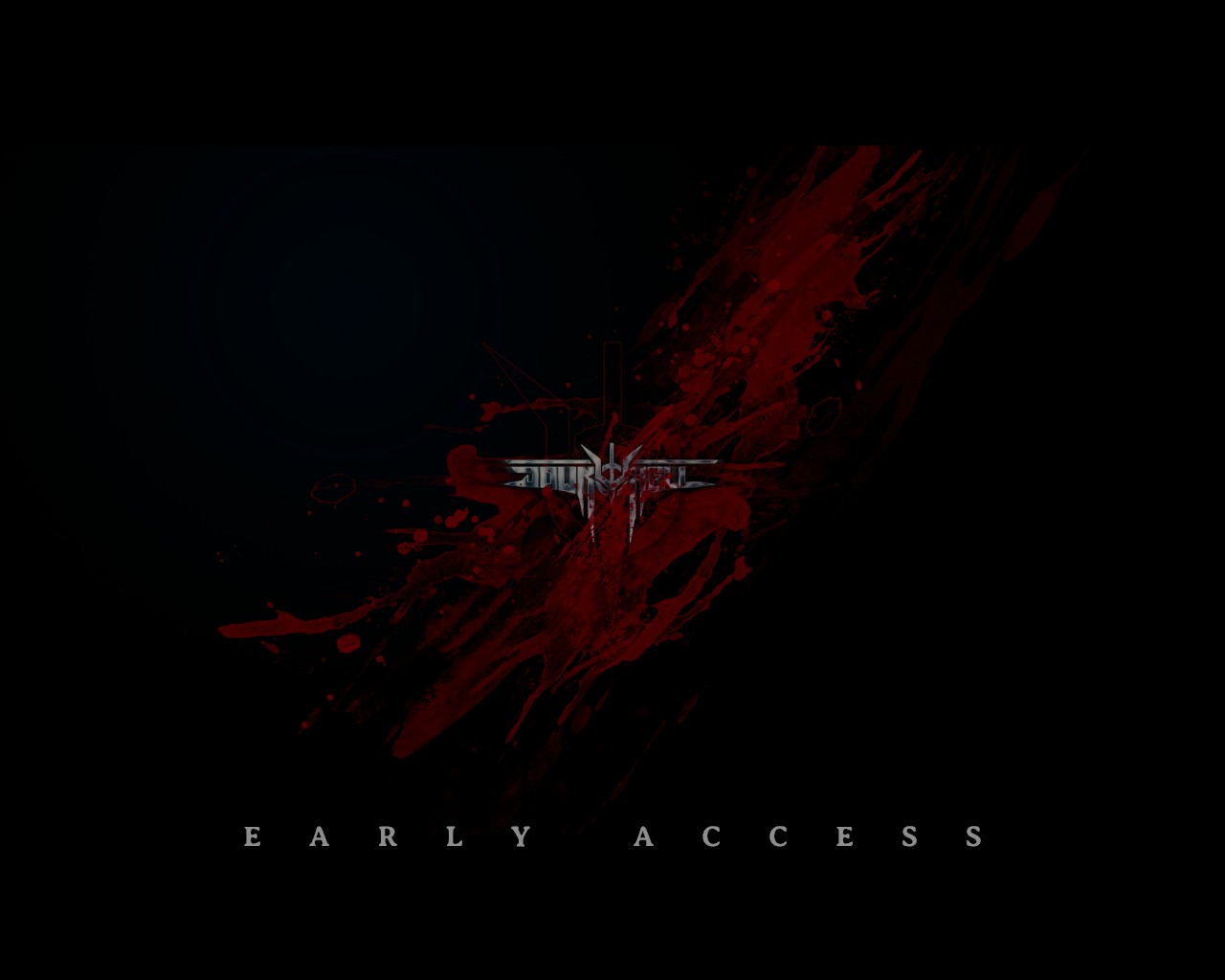 Editor’s Note: This game is still in Early Access and thus the thoughts and experiences mentioned here may be different at the official launch of the game. Down To Hell was graciously provided for review by Red Dev Studio S.A.

Who doesn’t love a good, challenging hack’n’slash these days? I know I do. Games like Dishwasher: Vampire Smile from the Xbox Live Arcade days were violent, frantic, and fun metroidvania romps with a rockin’ soundtrack to boot. When I first saw footage of Down To Hell I was instantly intrigued and started to get nostalgic for the action games of old. Sadly, DTH is just not great right now, but luckily has time to grow and develop over time as an Early Access title. 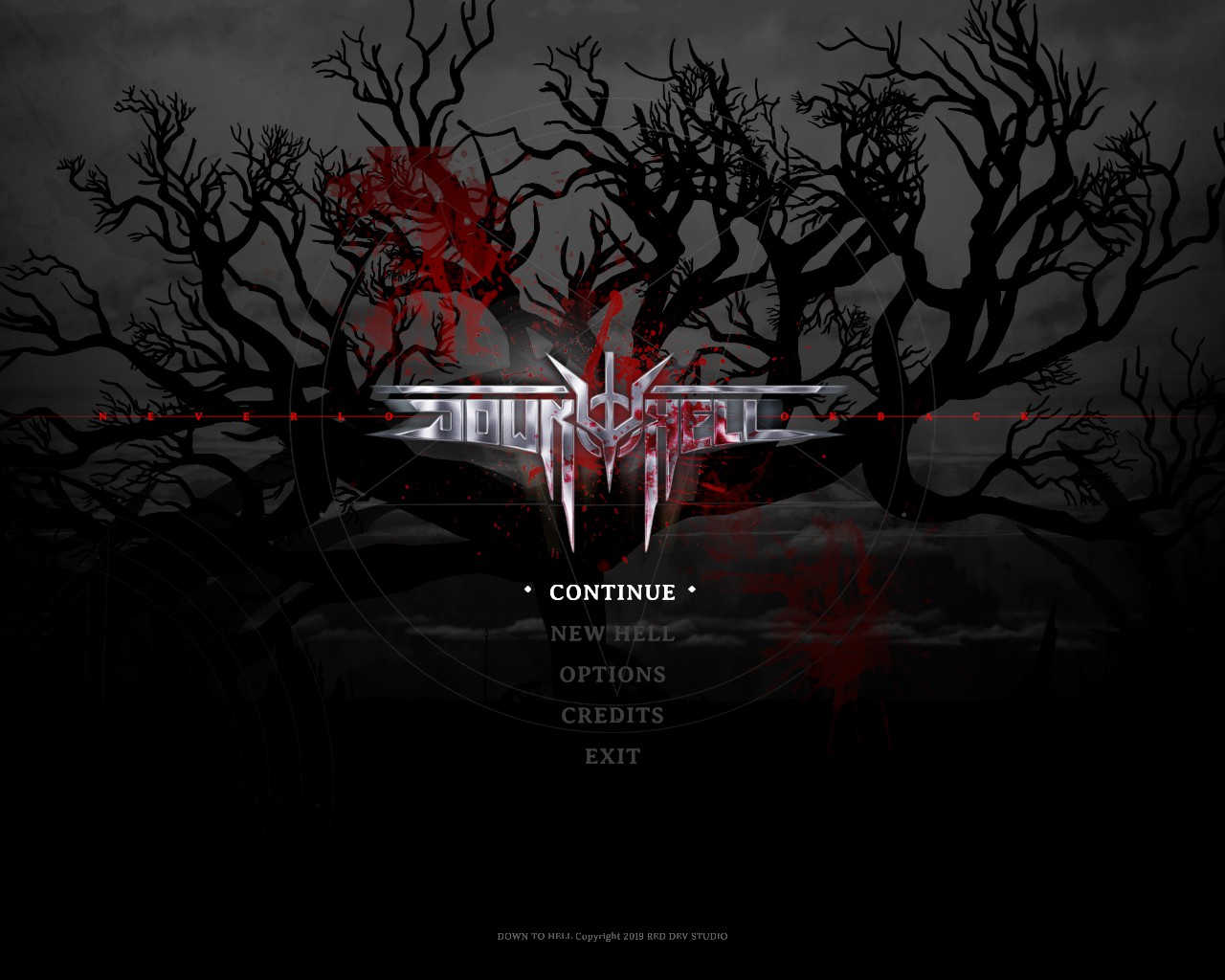 The title says it all really. Down To Hell sees players filling the bloodstained greaves of a knight with a dark past as he cuts bloody swathes through hordes of demons in an attempt to rescue a young girl kidnapped by the very demons he was sworn to destroy. That being said there is obviously a very dark, demonic tone to the music, art, and setting of the game and bloody corpses, viscera, and body parts spew from geysers that litter the environment. There is no nudity and the soundtrack is very loud, crunchy, and heavy. Fans of DOOM will feel right at home, but some players may not find this theme all that appealing.

Down To Hell is an Early Access title most similar to something like Salt and Sanctuary or Hollow Knight: tough as nails and literally feels like Hell to play. However, while the aforementioned titles succeed most in their difficulty and gradual encouragement towards players as they overcome those gameplay challenges, Down To Hell seems to want to kick players while they’re down with its mundane and boring combat, lackluster enemy variety, and bland copy & paste environments. 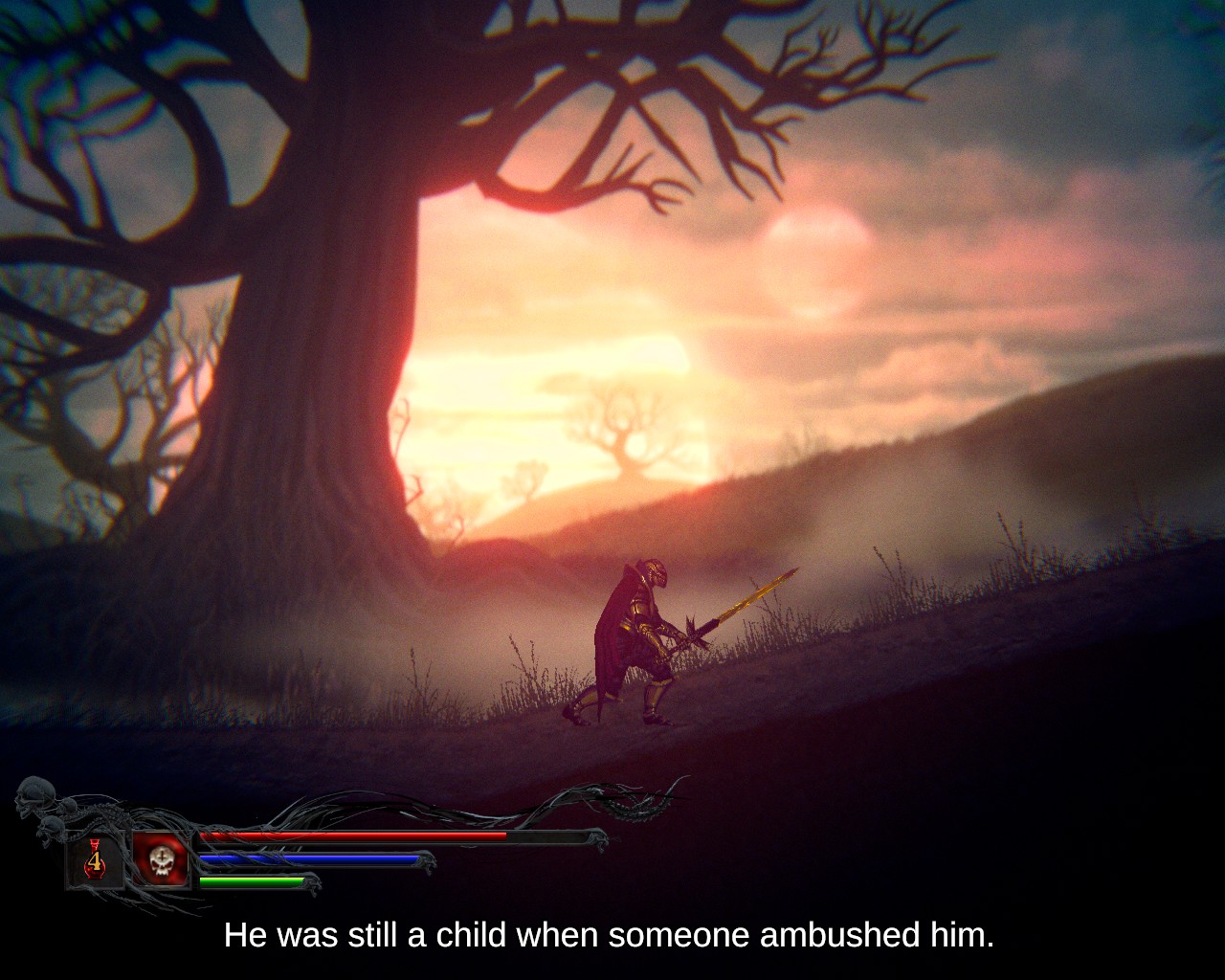 Get used to this drab, orange background. You’ll be seeing it constantly in Down To Hell.

Being an Early Access title no one expects a masterpiece going in, but Down To Hell feels like a punishment equal in tone to that of its dreary hellscape. Gameplay feels clunky (and the animations leave a lot to be desired) and the difficulty seems to spike up inconsistently due to unnecessary platforming sections and the sheer boredom that comes from fighting the same three waves of the same three enemies in every room. The first time I was introduced to the third enemy type players can encounter in the game, I didn’t even realize that he was any different than the hundreds of cut-and-paste monsters I had slaughtered prior to our encounter. Sure, he had attacks that took literal chunks off my health bar but due to the awkward and clunky animations, a quick dash behind him and a few heavy attacks made quick work of him. 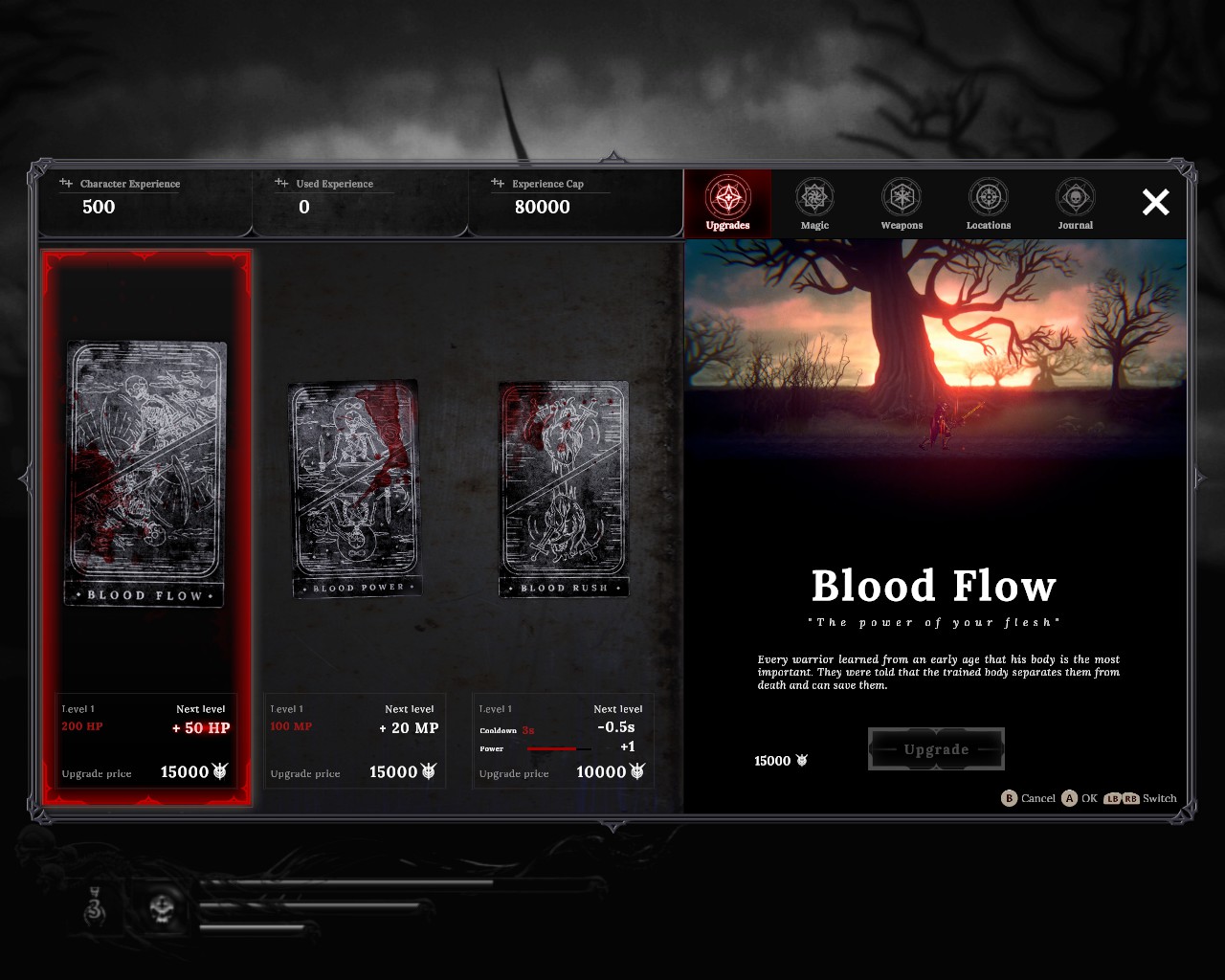 The cheapest character upgrade is 10,000 points! I had about 500 the first time I made it to the save point before the boss.

This is the strategy for most combat encounters in this game. Part of DTH’s tag line is Combo, Kill, Die, Repeat and it gets three out of four of those right. If by combo they mean a slow downward slash or a slightly faster, heavier downward slash then yes, there are combos. Also, maybe I haven’t earned enough experience in my brief time with the game, as it takes an astounding 10,000 experience just to get your first character upgrade, but the RPG and upgrade mechanics feel useless to all but the staunchest gluttons for punishment. I can’t even imagine the grinding that would go into earning enough exp towards that first upgrade. Also, from what I could see, there is no way to track how many “souls” you have collected from downed enemies until you get to a “shrine” that works much like bonfires in Soulsborne games to check how much experience you have towards your next upgrade. 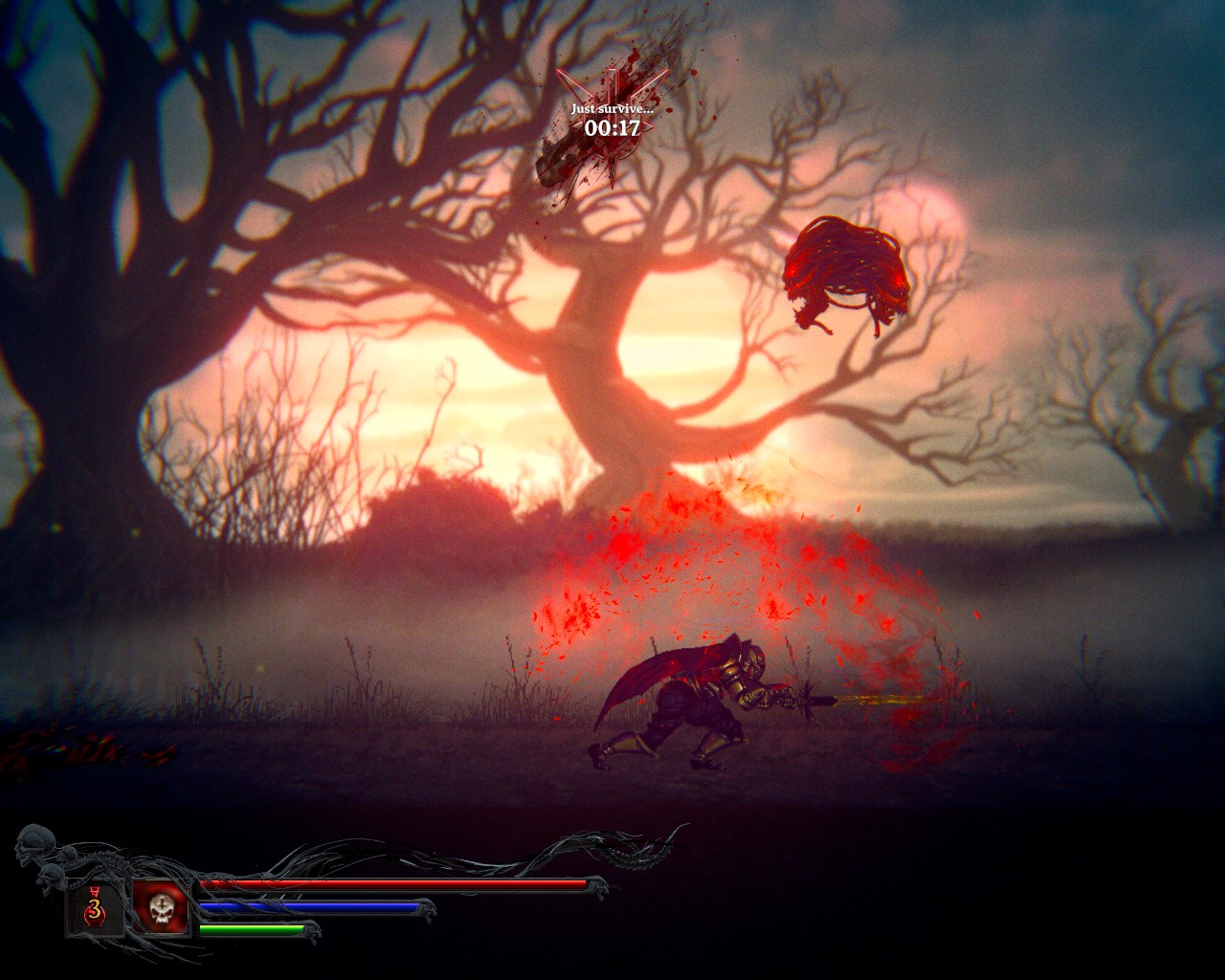 Combos in DTH consist of one of two attacks that look exactly the same, save for this sparkly blood trail when using a heavy attack.

Players are shown the silhouette of a potential second weapon but reading the development timeline on the game’s Official Steam page reveals that the second weapon is not yet available. And even if it was, I don’t think DTH would be able to hold many player’s attention long enough for them to grind to earn that weapon or any of the many spells that are also available. 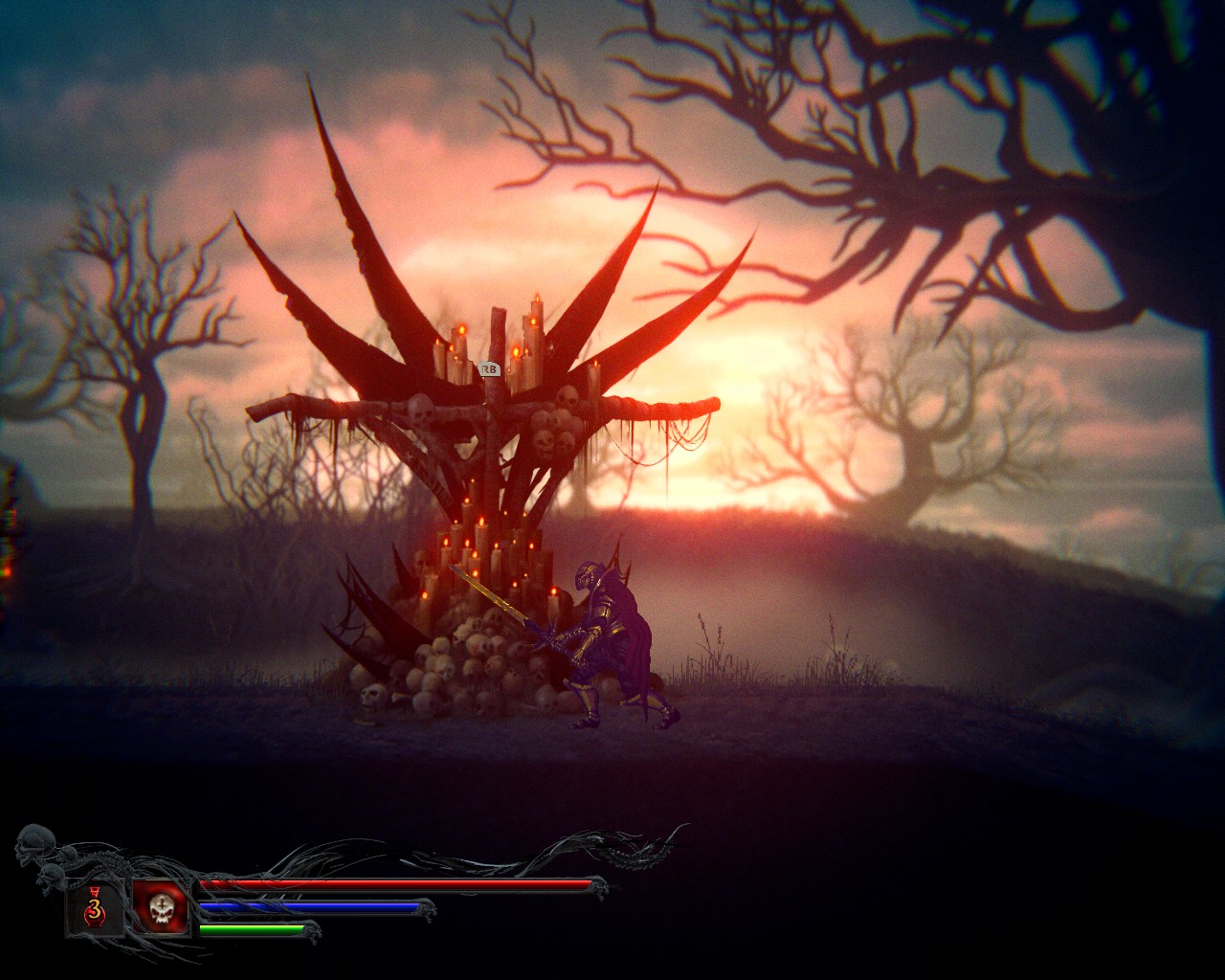 Shrines act as save points mid-level and offer the opportunity to upgrade the Knight and his skills.

Players also have magic at their disposal but the almost non-existent damage it deals makes it feel useless. Its not like it can be used for crowd control as enemies tend to gather in the middle of every arena (which all look the same by the way) and any semblance of strategy is thrown out the window as the most viable option is to dash behind the group and slash away until everything is dead. There are airborne enemies which require players to jump and fight in mid-air. Even so, all attack animations look the same in mid-air as they do on the ground.

Perhaps the most disappointing thing about DTH is the combat itself. While I have already mentioned that there aren’t really any combos other than a basic slashing attack and some weak magic attacks, there is also no variation or required strategy to combat. Enemy encounters typically occur in waves of three at a time before the next “screen” is finally unlocked and players can go about their merry way dying to the many puzzling and unnecessary platforming sections. In my time with the game, I happened upon one slight change to this formula: a timed gauntlet where players fight wave after wave of the same boring enemies until the timer expires. Yay, variety! 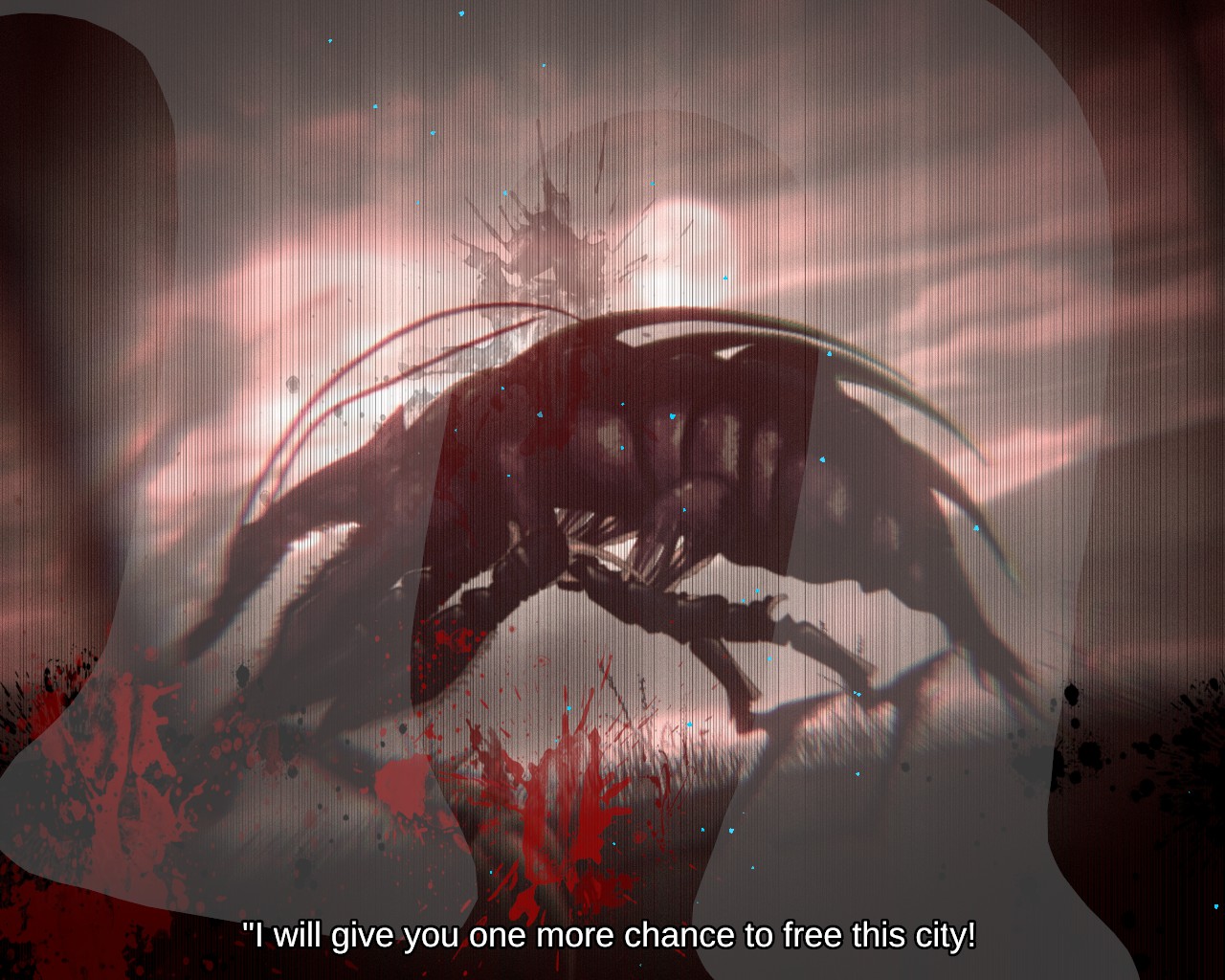 This giant lobster/bug looking guy was VERY angry with me for some unknown reason.

Even boss encounters feel lacking as the only real challenge comes from the itty bitty, cramped arenas you are forced to fight them in. Most games of this nature would have platforms to jump on to avoid the boss’ dash attacks or projectiles before jumping back to ground level to dish out some punishment. Not here, the only option is to run left and/or right or use the jump and dash method and hope that the hitbox god blesses you with luck and you avoid losing half your health from one attack. The only boss I was able to make it to in my playthrough was a giant demon/lobster who I think was just really upset with me for eating the last cheddar biscuit at Red Lobster. He proceeded to spit acid at me and throw up at least ten demon lobster babies to come and murder me as soon as my feet dared touch the ground. I understand challenge and that boss are supposed to be hard, but I have never experienced a game so actively designed to work against the player. There is barely room to dash under or over the boss as the arena is walled off with maybe an inch to move between me and the barrier that has consigned me to this dull and lifeless fate. Eventually, I just started to assume my character would die of claustrophobia before the boss ever got to him.

What little story DTH has is nigh incomprehensible and the narration feels forced while the voice acting is just so-so. I ran into who I assume to be a wizard NPC a few times who said some things that I can’t remember because I just wanted to see some new scenery or do anything else than slay the same monster for the 100th time. The main character, who may as well be nameless, has the worst personality of any protagonist I can recall in recent memory. He sees a girl get abducted and carried off by the very demons he was viciously slaying moments before yet never thinks to go and rescue her himself, he simply shows no empathy or emotion whatsoever when this happens. When confronted by the wizard and tasked with retrieving the girl, the knight scoffs and threatens the man. Why? We never get any motivations behind the main character’s actions or even why he is in what I perceive to be hell in the first place. Is he going Down To Hell to rescue the girl? Or did he already go Down To Hell before we saw her get abducted? I get that Soulsborne games usually thrive on vague and mysterious stories but we typically at least know some kind of motivation for our character’s actions and their place in the world around them. Here we get none of that. He is just a guy who loves killing and got bored with killing people so he turned his violent intentions towards demons, I guess. Who really knows? 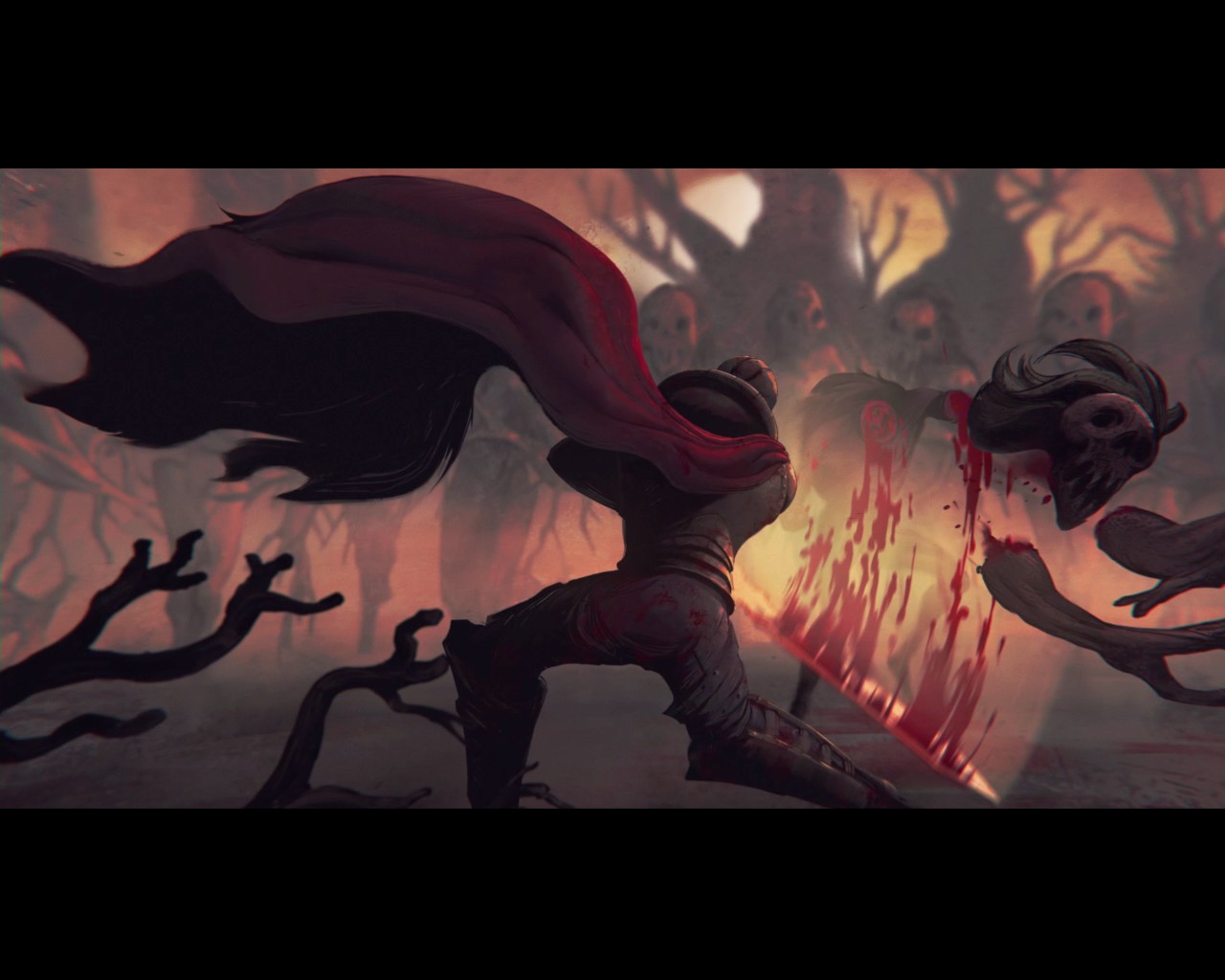 One of the best parts of DTH is this comic book style cutscene.

Despite its myriad flaws, DTH does have a few high points. The soundtrack is excellent and calls back to games like DOOM, Killing Floor 2, and other games all about killing demons and other horrors in brutally glorious ways. The art style is also interesting though there is almost no variety in the environments. The seemingly hand-drawn illustrated cutscenes are considerably well done for a game that is otherwise depressingly mediocre. Though, being an Early Access title, DTH does have a lot of time to grow and develop into a good game and I sincerely hope that it does because games like this are typically right up my ally. Though in the case of DTH,  I can think of much better games to spend $10 on.