Preview: Empires of the Undergrowth (PC)

I enjoyed the opportunity to play Sim Ant because I neither owned a PC nor an SNES at the time it was in circulation. Yet, I have always remained intrigued by not only that specific game, but simulations in general, as I find them analogous to real-time strategy games, albeit free of competition. Thus, when I became aware of Empires of the Undergrowth, I felt as if I had gained a second chance at a childhood desire in both virtual and real worlds. After all, there was a time in my youth when sending ant beds into distress by mixing ant beds with a shovel was a favorite pastime. surely, experimenting with a video game is more humane. 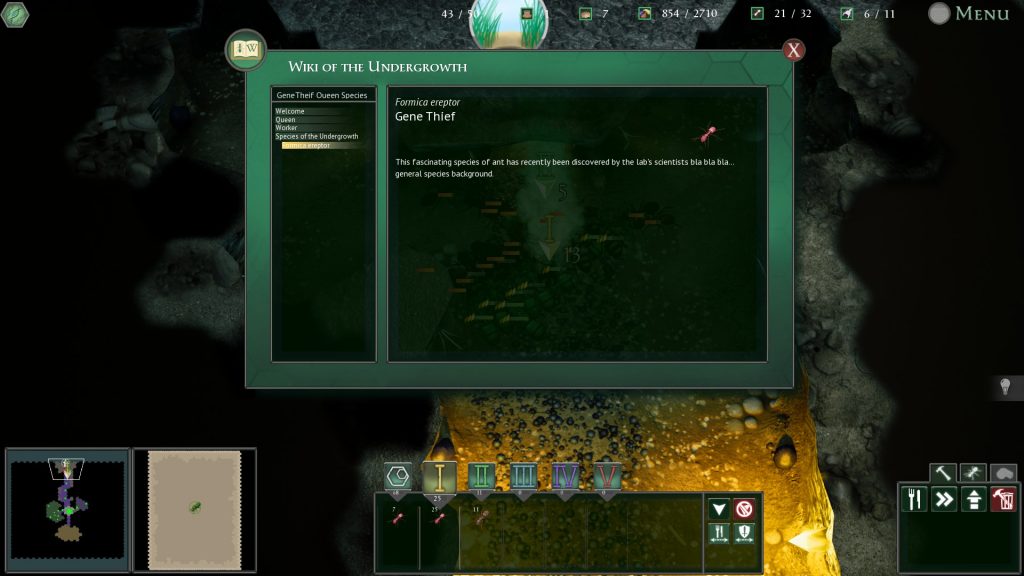 One can tell that the developers are having fun with with their project. Looking forward to a finished in-game wiki.

Empires of the Undergrowth thus far lacks the large red mounds that I used to see down home in Alabama. Instead, gameplay begins in a formicarium, more commonly known as an ant farm. I name mine Zerus II, a fond homage to gaming’s most infamous arthropods. I am charged with the care of an ant species called formica ereptor. Now, am no entomologist, but my Google-fu reveals that this is a fictional species—for those like me who remember “kingdom, phylum, order, class genius, and species” from 6th grade science class. I never really cared that there are so many kinds of ants before playing this game, so the developers at Slug Disco Studios should consider it a victory in and of itself by encouraging someone such as myself to research this stuff just so I can feign to be knowledgeable. For example, formica is the actual genius from which the in-game ereptor is based; for the curious, the fire ants that I used to terrorize (rest assured, the lifetime scoreboard is definitely in their favor) called solenopsis invicta, and they are considered one of the worst invasive species in the world. It all makes sense that a creature so hellish originated in South America! *shakes at no one in particular* 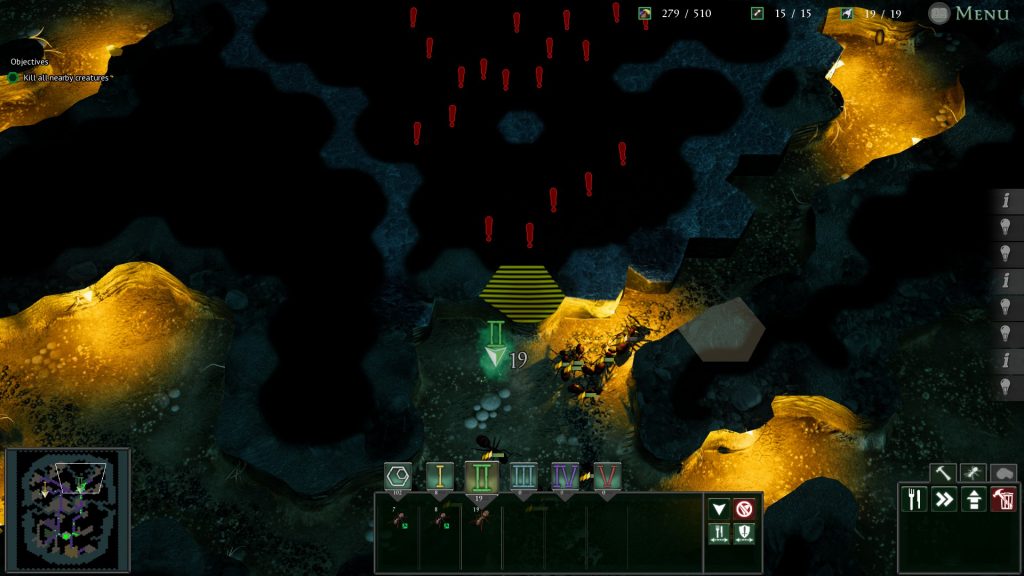 I instruct my workers to dig for food, and I unknowingly exhaust my digging points. I am then prompted to select a mission from a menu located at the top left portion of my screen, where upon completion, I will be granted more food, digging points, and royal jelly. I oblige. The ensuing mission informs me that my ant colony has taken residence inside of a log or tree, but my ants are not alone. I am told that my queen is fat (rude!) and vulnerable (useful info), and that she will need to breed an army to defend herself. My mission is to clear this territory of all threats—a significantly aggressive shift from the peaceful food sourcing in the formicarium introduction. Thus, one thing I have learned from playing Empires of the Undergrowth is that while God’s creation might be perfect, Mother Nature on the other hand can be a harsh misstress. Thinking I was ready with my two formica fusca soldiers,, I instruct my worker ants to dig near the red exclamation marks. There awaited an enemy called the devil’s coach horse beetle, and they proceeded to devour my pathetic colony. Game Over. 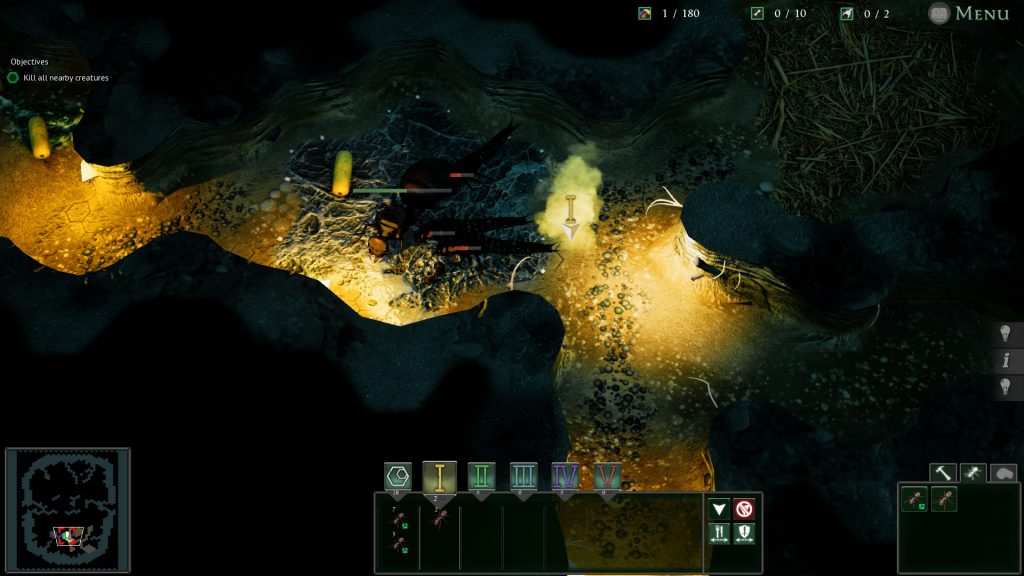 I was more successful on the second attempt, maintaining close to a 3-to-1 soldier-to-worker ratio. This rule of thumb is taxing on my food supply, but this strategy became useful when I faced wolf spiders in the second mission. A human may think that spiders are frighteningly fast—granted, they do have eight legs instead of six—but they strike like lightening-fast against ants by not fighting, but abducting them whole. Only with attrition and overwhelming numbers was I able to vanquish this foe. But that was not all! Polyergus lucidus, or slave-making ants, begin raiding my nest for pupae as my fomica fusca black ant soldiers defend. I endure the threats and victoriously return to the formicarium. 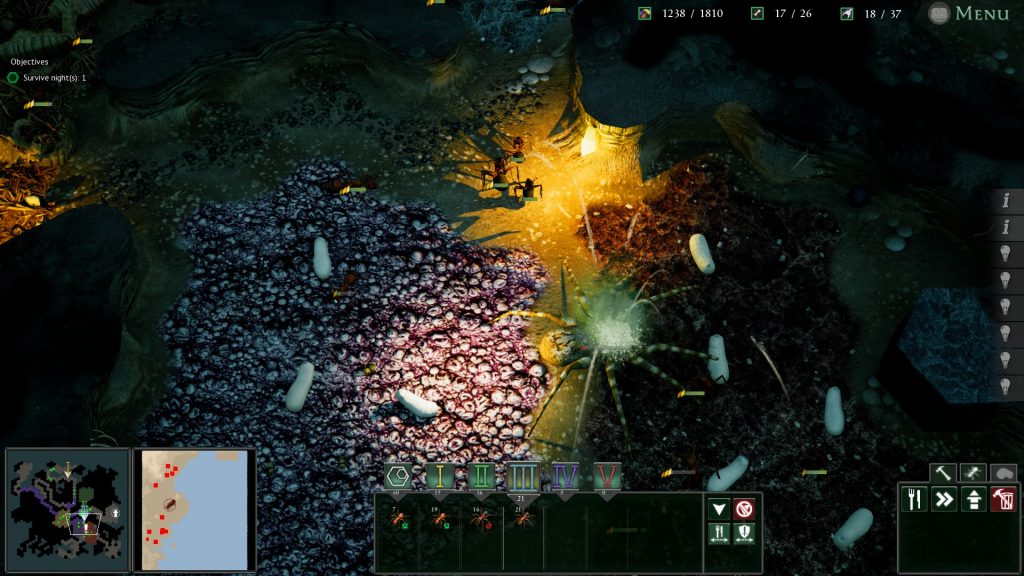 The developers have consciously included an “arachnophobia” toggle option for those who would rather not see this mother spider who, unlike her young, does not take prisoners but simply kills them.

It is then that I realize that my formicarium is a hub world, queen and her workers, formica erector, borrow from other other species. For example, my soldiers are formica fusca, spliced to fight for me. I noticed that I was able to use my newly-earned royal jelly to research a new ant, formica rufa, a ranged unit that squirts acid from its abdomen in rapid fire or in a slower, arcing style. As Empires of the Undergrowth moves toward going gold, I hope—expect—that there will be more units as well as proper introduction to them in a more traditional RTS style. 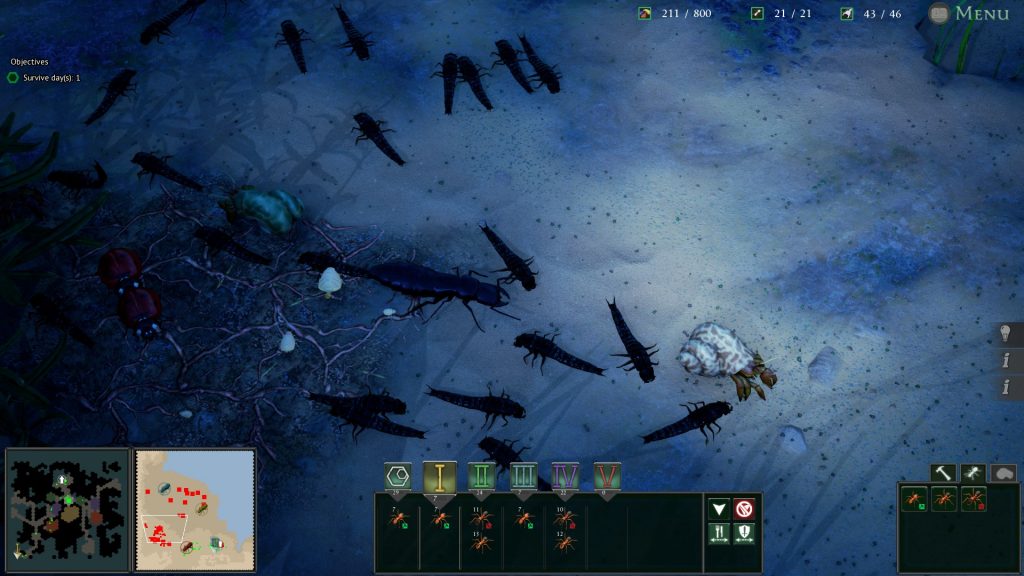 Thus far, there are only ten maps–four alpha demo maps found under “extra modes,” four campaign scenarios, and two formicarium challenges that serve as humble skill checks. The developers at Slug Disco have promised to deliver more content in six-week cycles,. In the meantime, interested parties will have to settle for difficulty and challenge mode toggles such as enabling grasshoppers in mission 1.1 to randomly borrow into the hive, inconveniently tag-teaming with those devilish beetles. 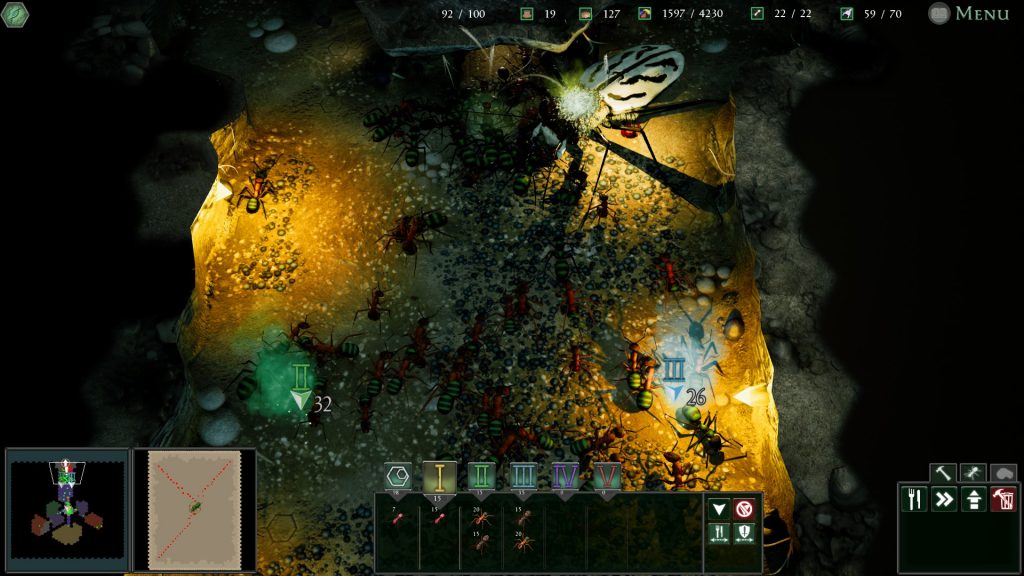 Me staving off a seemingly never-ending (see the overworld minimap) onslaught.

As can be seen in these screenshots, the lighting could use some adjustment beyond gamma elevation. For all intents and purposes, that is my only complaint! Therefore, I strongly recommend Empires of the Undergrowth even in its Early Access state. It is already an enthralling experience such that unlike most other Early Access games that I treat as a demo and do not return to them until the game is finished, I will be all over Empires of the Undergrowth every step of the way. 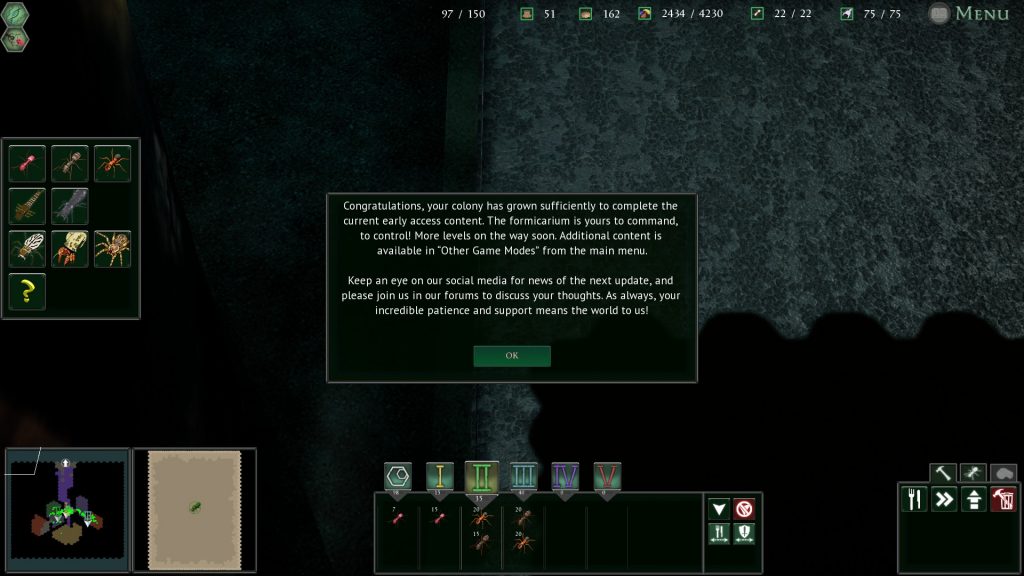 There is a much to-do on the forums concerning how to conquer the last challenge. I was able to best it, and look forward to further developments.