From the creators of the Crysis games and Ryse: Son of Rome comes a another battle royale and FPS hybrid that meshes horror with competition. Hunt: Showdown is the newest game developed with the Cryengine by Crytek. It’s a world set in the swamps and bayous of Louisiana. Hunt down monsters and banish them back to hell as you compete with other players to see who can find them first. Just merely surviving won’t win you the game, but it’s a good start. 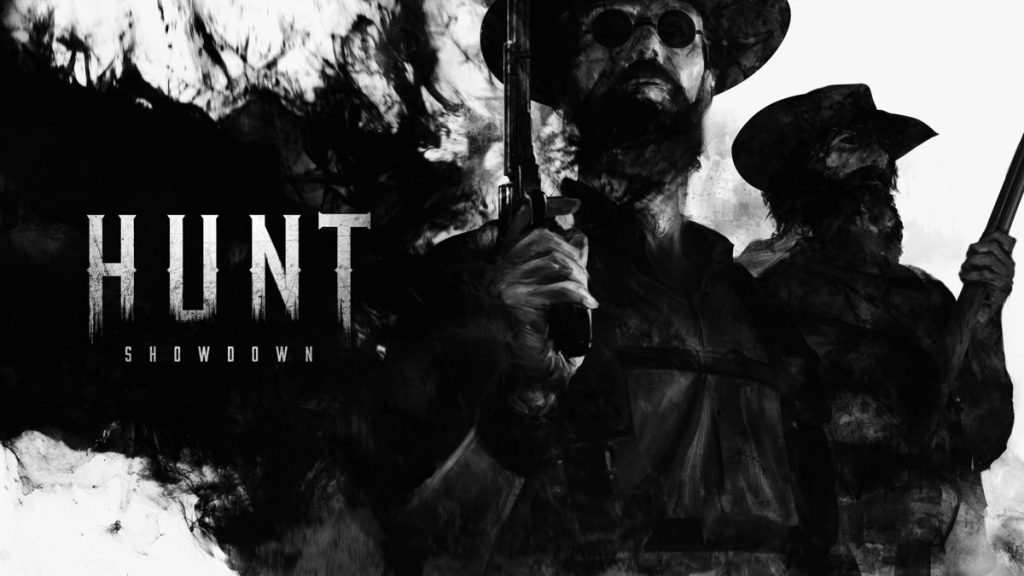 Begin the game by selecting a hunter and a loadout. Choose from a variety of guns to buy and equip. But be aware that you lose all gear you have equipped when you die; choose wisely! Once you have your guns, items, and consumables equipped, choose a target to track down. At the moment, there are only the Butcher and the Spider available. Both are strong enemies and will require major firepower and a clever wit to beat them into submission. 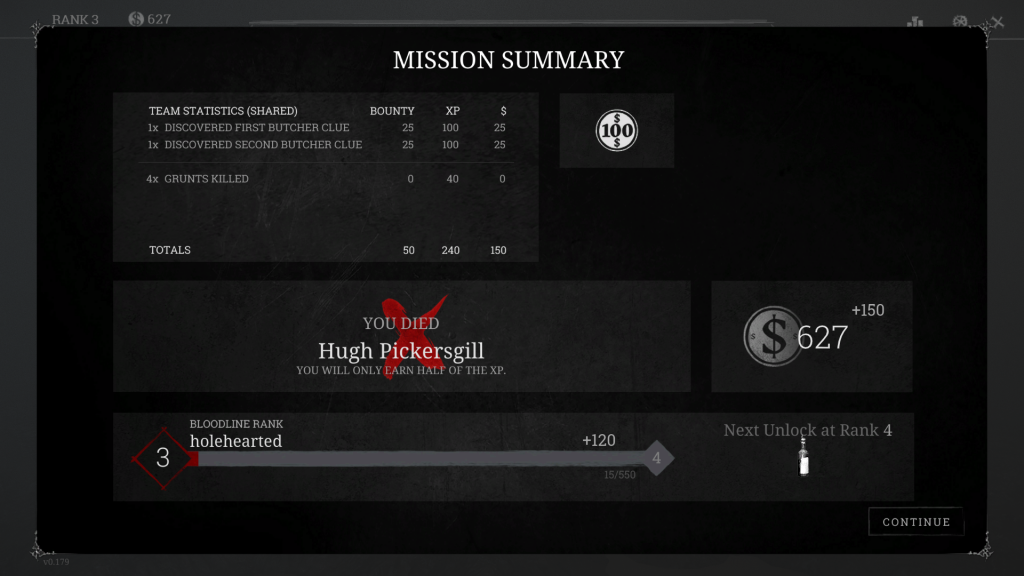 I died. But I still made money. #youcanttakeitwithyou

Before heading out into the field, you can choose to play solo or with a partner. I will say that it is much better choosing to play with a partner so that one can aid the other should they be met with unpleasant surprises that are inevitable. I ended up playing with a friend, and it was helpful to have that extra man there keeping an eye out. The only thing I would change is a more obvious way to track your partner. If you’re walking away and your partner is attacked, sometimes it is not obvious by any sounds or markers. Luckily, we had headsets so we could talk to one another.

One thing I strongly disapprove of is the waiting time to load the playing field. The longest time we ended up waiting in one of our games was nearly ten minutes. This is simply too long and my friend commented that the wait time feels longer than the actual play time, which is never a good feeling in any game. If Crytek wants Hunt to be successful, they need to fix the connection speed or create some sort of practice field to pass the long waits. 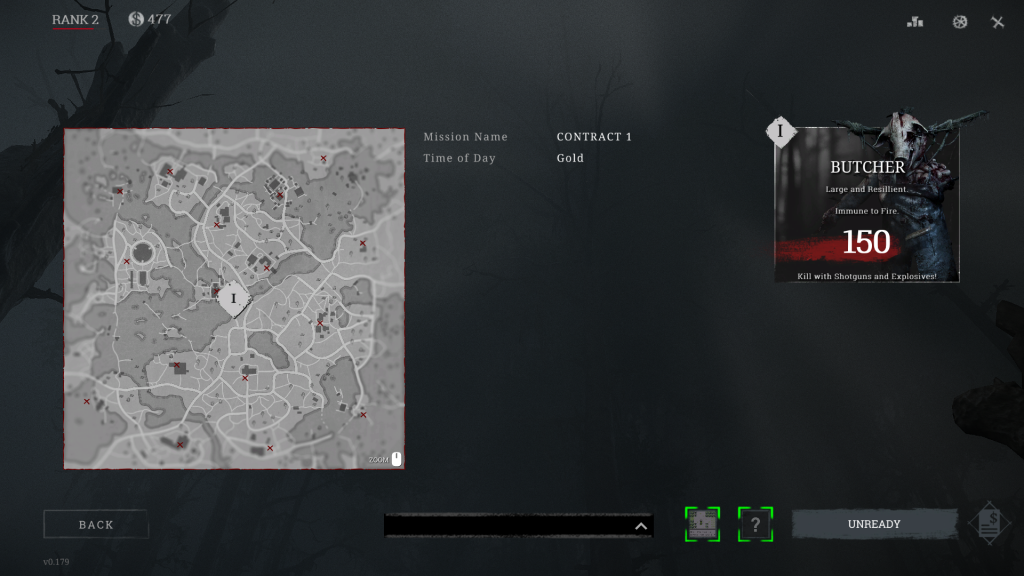 We only found the butcher two times…got owned both times.

As we traversed the map, we continually ran into several enemies, most of which were zombies. There are others as well, including a bee-controlling deformed human called a hive and a creature covered in wood used as shields. It’s tougher to kill the latter, requiring several point-blank shots from a shotgun. It’s easy for enemies to get the jump on you which is why it is so important to be aware and to make sure you reload often. There is nothing worse than an enemy popping up in front of you and your magazine is empty. Try to back up and reload when a wood-covered man is about to ram you.

The one thing I really enjoy in a horror game is the amount of spooky content it has that really is eerie and suspenseful. Hunt: Showdown I feel performs the horror aspect well. There were more than a few times we found ourselves suddenly yelling and running away from enemies that had us surrounded or that would pop up out of nowhere. Once we found all the clues necessary to locate our monster, their lairs turned out to be mysterious and sinister. We made our way cautiously throughout the warehouse, searching for our target. But our target found us instead. 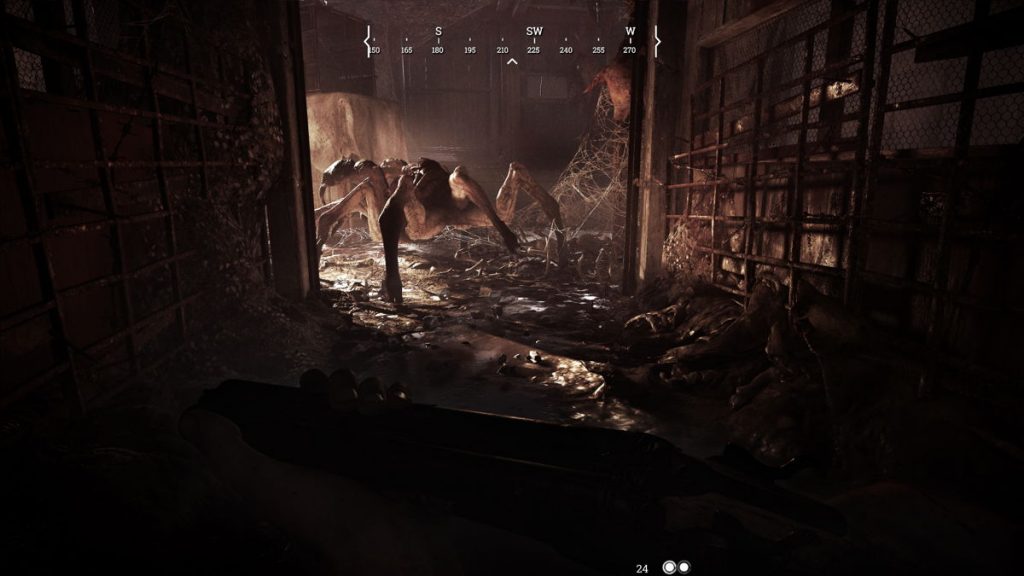 Our most memorable encounter was when we had located the spider. We entered its lair as slowly as possible and walked around looking for the gigantic arachnid. The floors and walls were covered in strange goo and webbing. There were bones and debris all over to add to the unearthly atmosphere. Nothing could have prepared us for its speed and random attacks as it zoomed around the room, biting and poisoning us in the process. Needless to say, we failed, barely taking a fraction of its life bar away. But although we failed, I had a lot of fun getting spooked and frantically shooting at an eight-legged blur.

The graphics are phenomenal and the environments are as realistic as you would imagine a swamp to be. Even wading through the swamp is simulated, slowing down your speed, making yourself vulnerable to monsters. The bayous are detailed and the map is humongous, taking a while to get from one area to another. 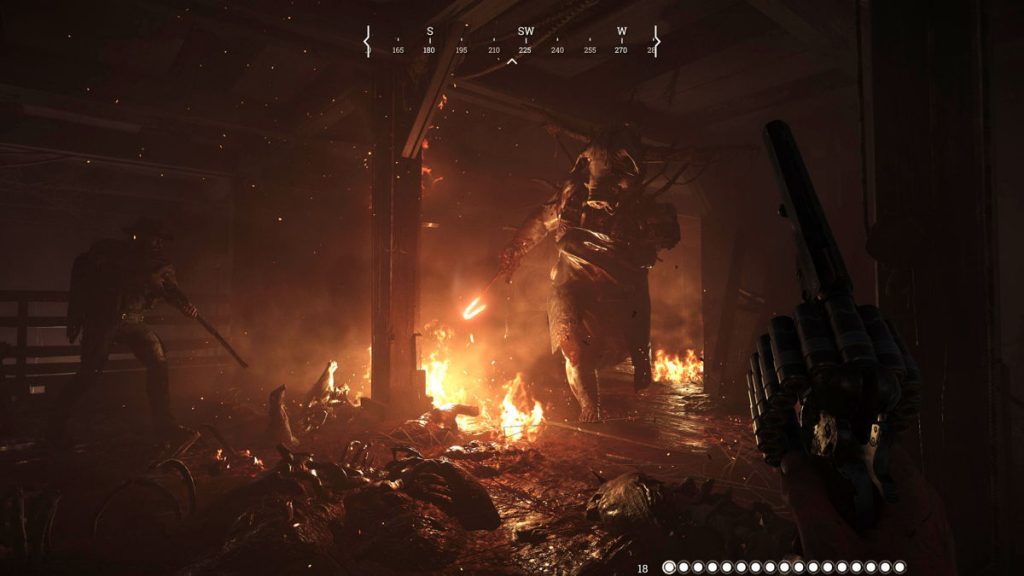 One thing I noticed during my play time is the amount of things one must do to win the game. Other battle royale games like Fortnite and PUBG can be simply won by merely surviving. In Hunt, you must look for clues of your targets whereabouts, find the monster, kill it, banish it, and then escape the map. Did I mention that every time you complete any one of these steps, all other players are alerted to your position, therefore increasing the competition as you progress? I personally think that it is simply too much to do in a game. I have a feeling most players die fighting the smaller enemies on the map and never even make it to a target monster.

Being one of the first horror battle royale games—if not the first—Hunt: Showdown has great potential. It does horror and survival well and could very possibly succeed in building a large player base. It suffers greatly under the burden of wait times and that simply must be corrected before it can truly shine.