As I awaken from a tomb-like structure, I proceed through the green-tinted hallway over a bridge separating me from the nothingness. Upon reaching the other side, I arrive into a room of death. A fight went down here, and it looks like one side lost convincingly. After rolling through some sort of force field screen, an obelisk stands before me. Here, I am able to equip the knives that are really swords as well as a rifle. Now that I have weapons, I know it will not be long until my first enemy encounter. 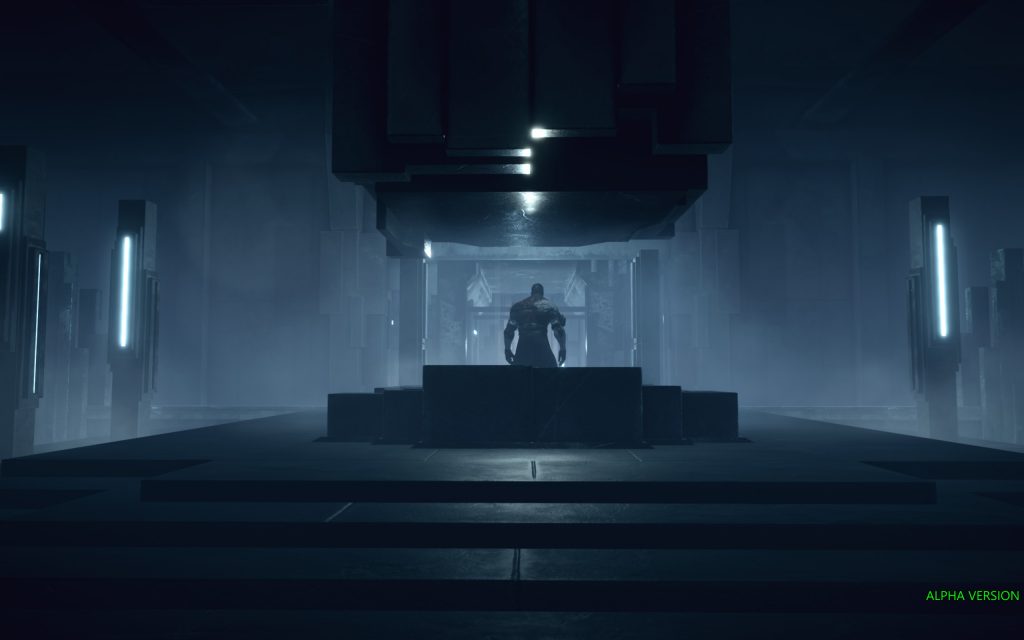 Sure enough, I encounter a zombie-like being in an adjacent room. Ugh, why always zombies? Well if not a zombie, some sort of soldier, right? Instead of shooting it as the game prompts me to, I cut it down, as I enjoy being stealthy. Based upon the following animations, Immortal: Unchained does not strike me as a game that will reward me with double damage for a sneak attack, but there are  there are times when it will be wise to avoid combat. After dispatching two more zombies who are more aggressive than the first, an unavoidable duel with a large, armed soldier ensues. I use my guns this time for certain, because this guy hits with authority. 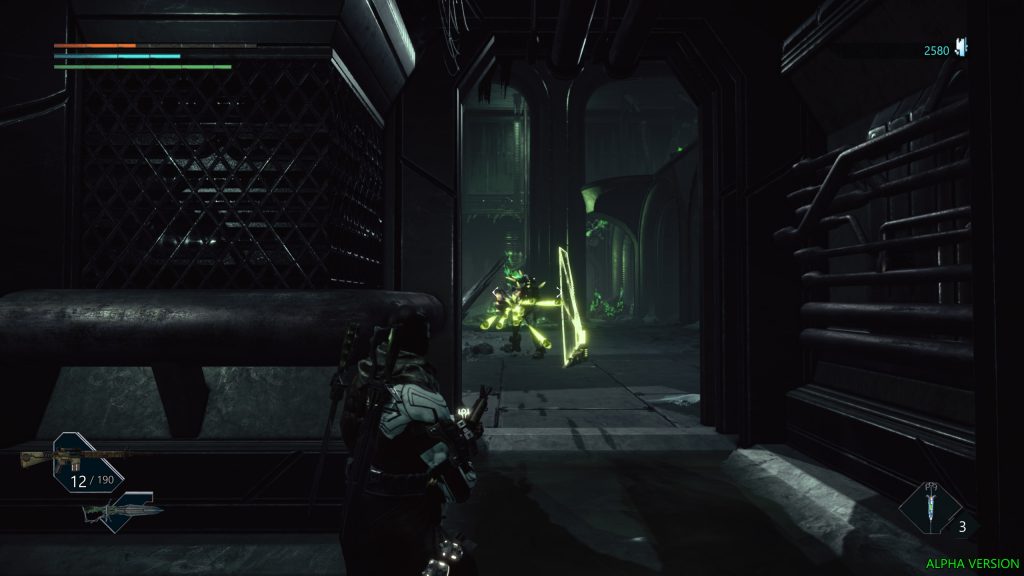 Immortal: Unchained has a limb-targeting system, but not a cover system. Still, it is wise to duck behind walls to avoid incoming fire.

It does not matter, because I perish anyway. I respawn from the obelisk—the “immortal” aspect of the game—and return to my foe. Where I was previously slain, a graphic resembling an inverted tornado awaits; I collect my “lost bits,” and barely survive my second attempt at this enemy. I succeed, and move on to find that there are additional zombies who are now armed with rifles and daggers of their own. They are no match for me, nor is this level’s boss, who is double the size of the sentry who had defeated me. I step through portal shaped like a window to escape this labyrinth only to enter another with snow. Another obelisk awaits in the distance. 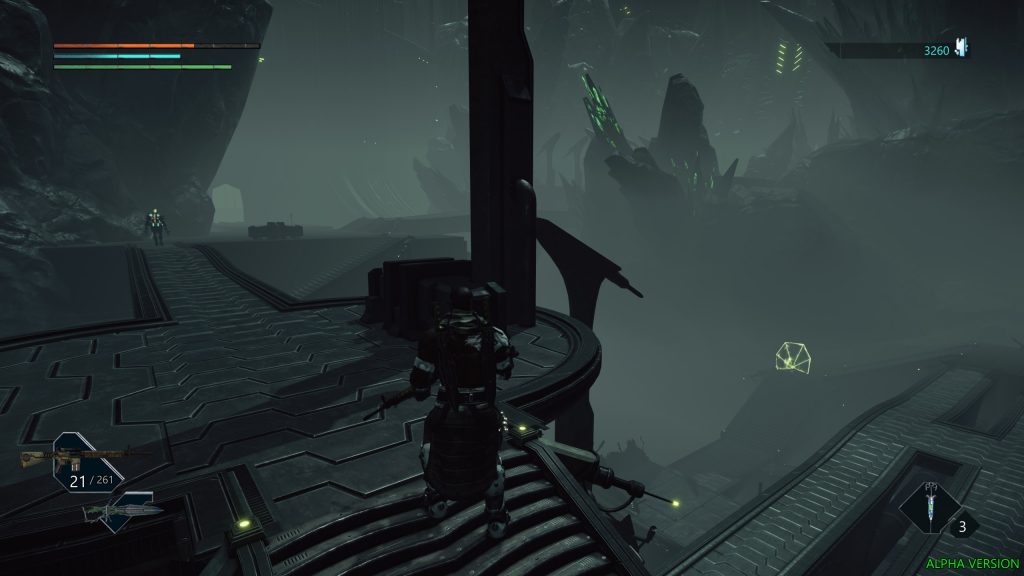 That dude over to the left? I did not mess with him. His poison rounds tear through me faster than any blow from the first boss. Also, notice the scaling in this game from down below.

It is here where I am reminded most that Immortal: Unchained strives to be a Souls-like, but with guns! Only at obelisks am I allowed to spend my “bits” to upgrade my stats, one interval at a time, and there are eight in total. From what I have experienced, I do not know if this means the game will be a grind, or one must exercise the uttermost discipline when “leveling up.” Some of the new guns that I collect along the way require stats beyond my immediate access, so I keep the basic set of pistols as a side-arm, and triple-shot rifle. Death always brings me back to the last obelisk I approach, but all enemies respawn, too. Fans of the Souls games enjoy this difficulty curve. I find them tedious.

On that, I did not get very far in the game. I attempted the second boss at least a dozen times and hardly did damage to 1/10 of its health before dying. This is because like in a Souls game, both dodging and attacking drain stamina. So, not being very good at dodging, I would spam that button, and not have much stamina left to shoot. Of course, the boss would strike true and I would eventually succumb to my wounds. 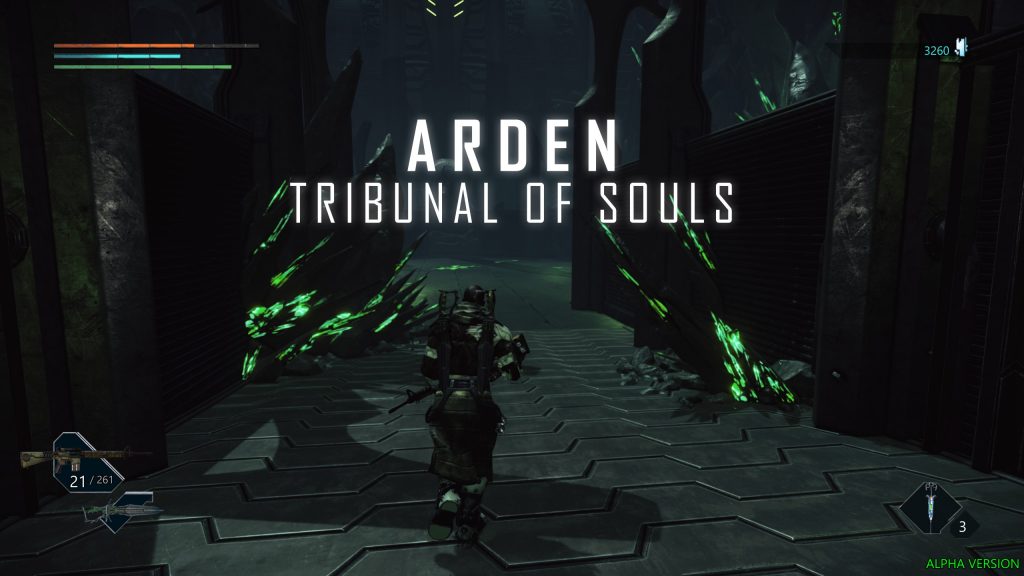 The last thing I saw in the game before I died.

I would have actually included a supplementary video in addition to my QuickScope above, however, while recording that session, Immortal: Unchained crashed. This was to be expected in the alpha phase; I had been impressed that the game thus far ran smoothly. What I struggle to forgive, however, is that the game deleted my save. Fortunately, I know it will only take me forty-five minutes to an hour to reach back to where I left off, but I do not know if it is worth the effort to do so since the 2nd boss is a skill check that I had been failing spectacularly.

Souls fans who would roll casters should feel right at home given what I have seen thus far in Immortal: Unchained. If there are any readers out there interested in getting their hands on an alpha copy of their own, stay tuned to our Facebook page, Twitter, and Twitch channel in the next few days. You may be able to score a key!