The original draft of this preview for Industries of Titan was a mock advertisement. Its objective was to comically promote migration to my colony, named Weylund-Yutani (yes, named after that franchise), urging candidates to ferry a Musk/Bezos-funded rocket to there. The problem is, developer Brace Yourself Games has yet to implement a host of features that would sound attractive to prospective colonists. Perhaps I am just not talented enough of a writer to land a joke about the unavailability of leisurely options on Titan because the game is in Early Access without confusing players as I shift between creative (non)(fiction).

Every tile invites its own adventure as one cultivates Titan.

The reality is, before I was able to try Industries of Titan on Steam, the game had already spent a year in an Early Access state on Epic Games Store. Yet Brace Yourself Games’ roadmap still lists two dozen items that I would have expected to already be in a simulation like this, if not at least patched in over the course of its first 365 days. I cannot help but to wonder if the ends of EGS, which is developers supposedly earning a larger revenue cut for games sales, justify the means, which is to get gamers to buy indie games on EGS, especially Early Access games where player feedback is imperative. As of this writing, to the detriment of Brace Yourself Games,  EGS (still) does not have user reviews or forums where this input can be archived and actioned. 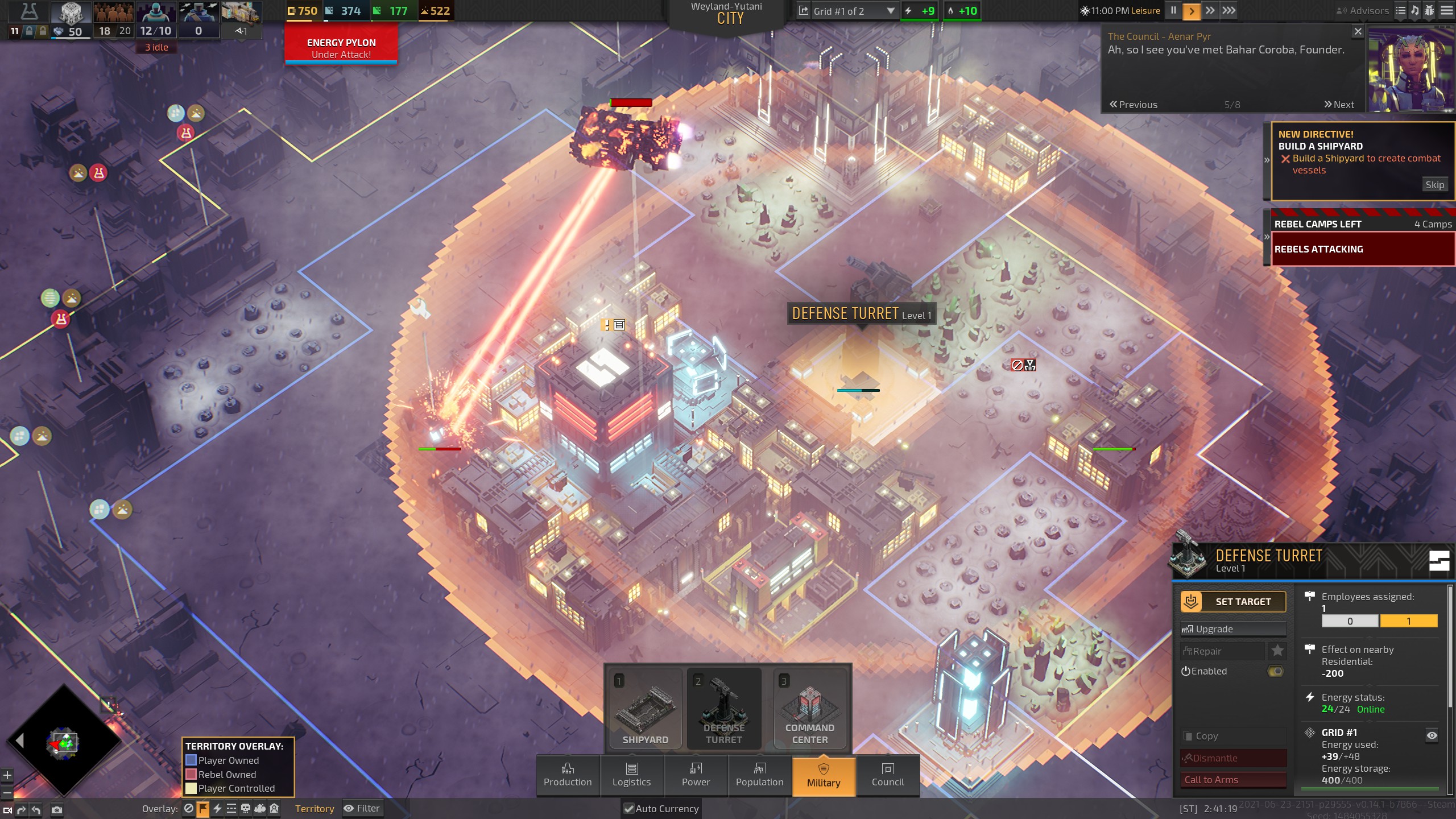 Though Industries of Titan offers a 4K mode (which I did not figure out until ten hours in), it is voxel-based. The best looking voxels I have ever seen, to be honest.

To give simulation fans an idea of its current state, Industries of Titan is more advanced in what it seeks to accomplish than Space Haven, but not as robust as Oxygen Not Included in their first years. The game is fun, but there is plenty of room for improvement. I levy this critique only after finishing a single scenario and then jumping on Discord to learn that there is supposed to be more to Industries of Titan than what it currently offers.

Folks on Discord not pulling punches. Neither am I.

For example, the objective of this game is to make money; currently, there two ways to accomplish this: have citizens click ads all day at monetization stations or work in a soul-crushing office. But citizens only work from 8AM-4PM; leisure time lasts from 4PM-2AM, with sleep from 2AM-8AM. Before seeing the roadmap or visiting the official discord, I imagined employees eating, drinking, and clubbing “off screen.” I just assumed those things were beyond Industries of Titan’s scope. In actuality, besides producing waste, which my employees (workers) pick up lest living conditions decline and my colony’s mortality rate escalates, my citizens remain idle during downtime, content to be bored. The revelation that leisure activities and citizen happiness are developer roadmap objectives dispels my suspended disbelief that people would want to live on Titan, especially if all there is to do is work. 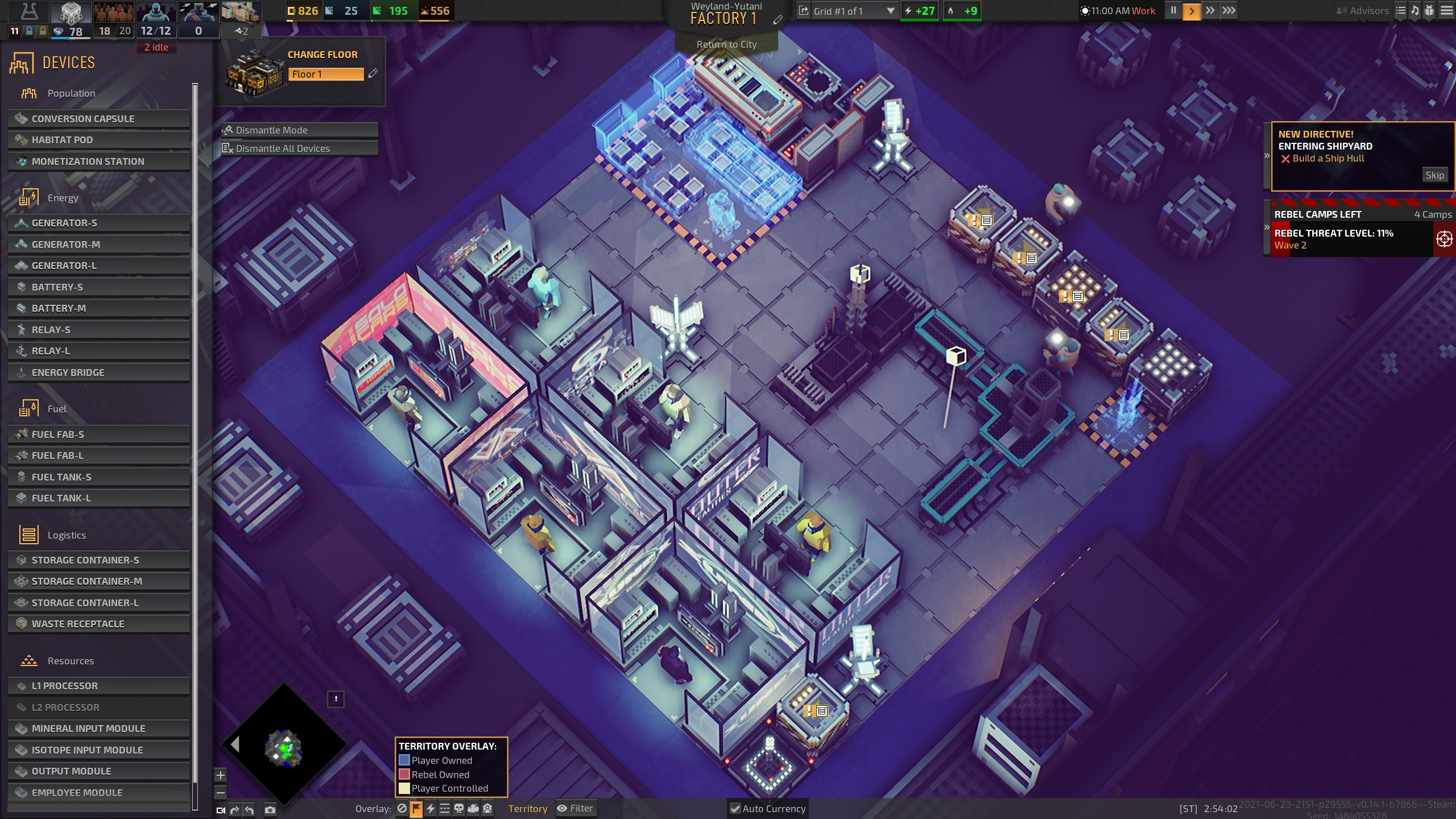 Monetization booths are cool looking, while the employee vats in the northern corner is like a coffin to bore the undead.

So much for my mock advertisement idea.

Incongruently, Brace Yourself Games inadvertently places the cart before the horse, for the meta-narrative of Industries of Titan concerns players taking the role of an unscrupulous capitalist who lures people to Titan to convert them into mindless drones (employees) to perform the RTS-like tasks of mining minerals and isotopes, refining them, and converting these resources into buildings that house more citizens, resources, or energy sources, in a gaming loop where the objective is to develop the biggest, baddest city-industry. But how does one lure people to Titan if there is nothing interesting or fun to do there? 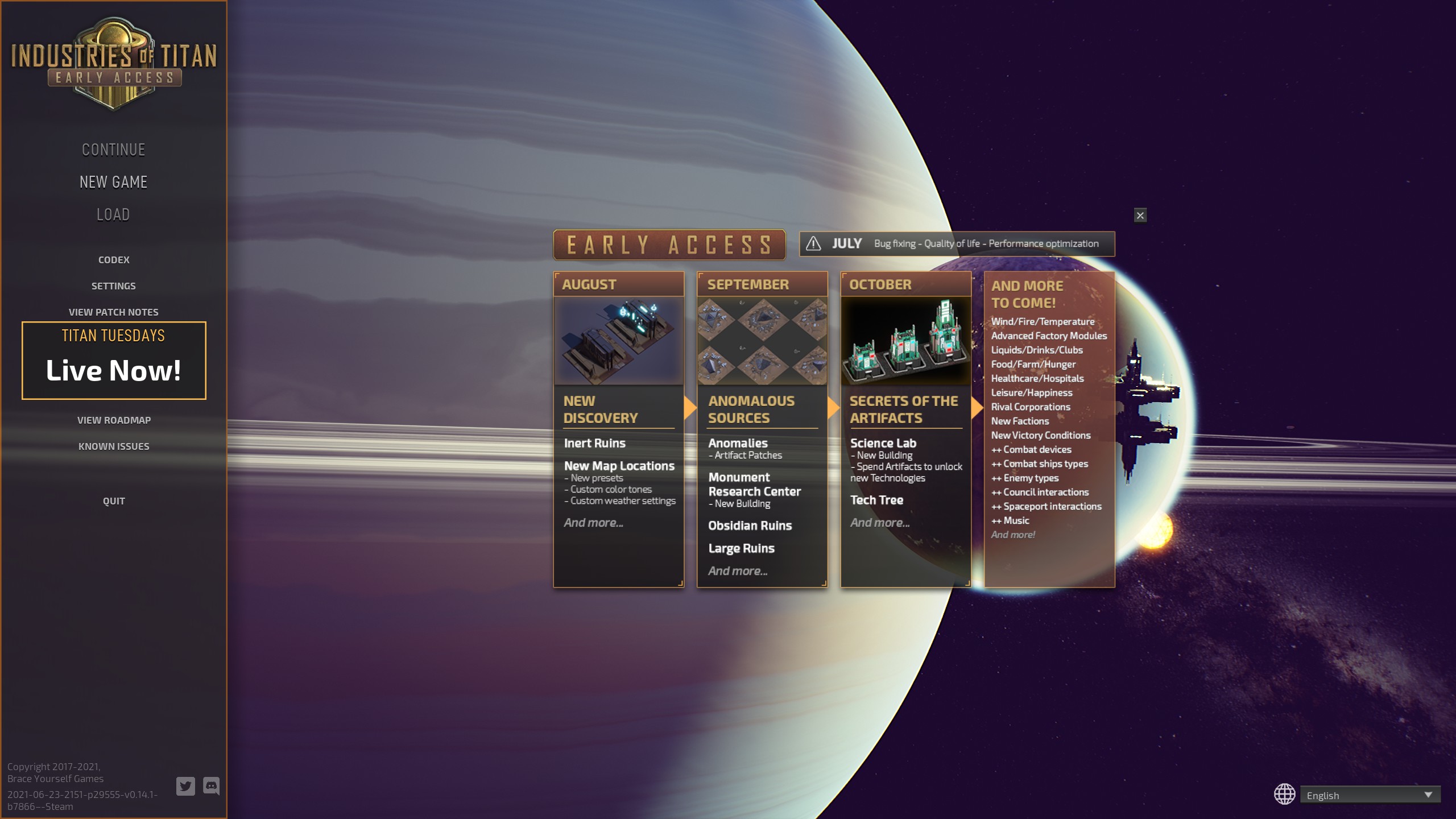 That is a lot of fundamental features. In fact, the last column seems to me more critical, while the columns to the left strike me as post-launch fine tuning.

So we will have to wait for Brace Yourself Games to add citizen management. In the meantime, local rebels who want to liberate the fools who sold all their belongings to move to a moon to start a new life on a wish and a prayer provide an incentive for the most pleasant surprise feature in Industries of Titan: FTL-like ship battles! First, one must construct a shipyard, then unlock chassis. Ships require their own onboard fuel and energy generation separate from the city grid, so squeezing engines, generators, life support, and weapons onboard is its own Tetris-like game; for someone like me who appreciates symmetry, it is an additional challenge of placing engines and weapons in appropriate locations based upon where the ship faces. 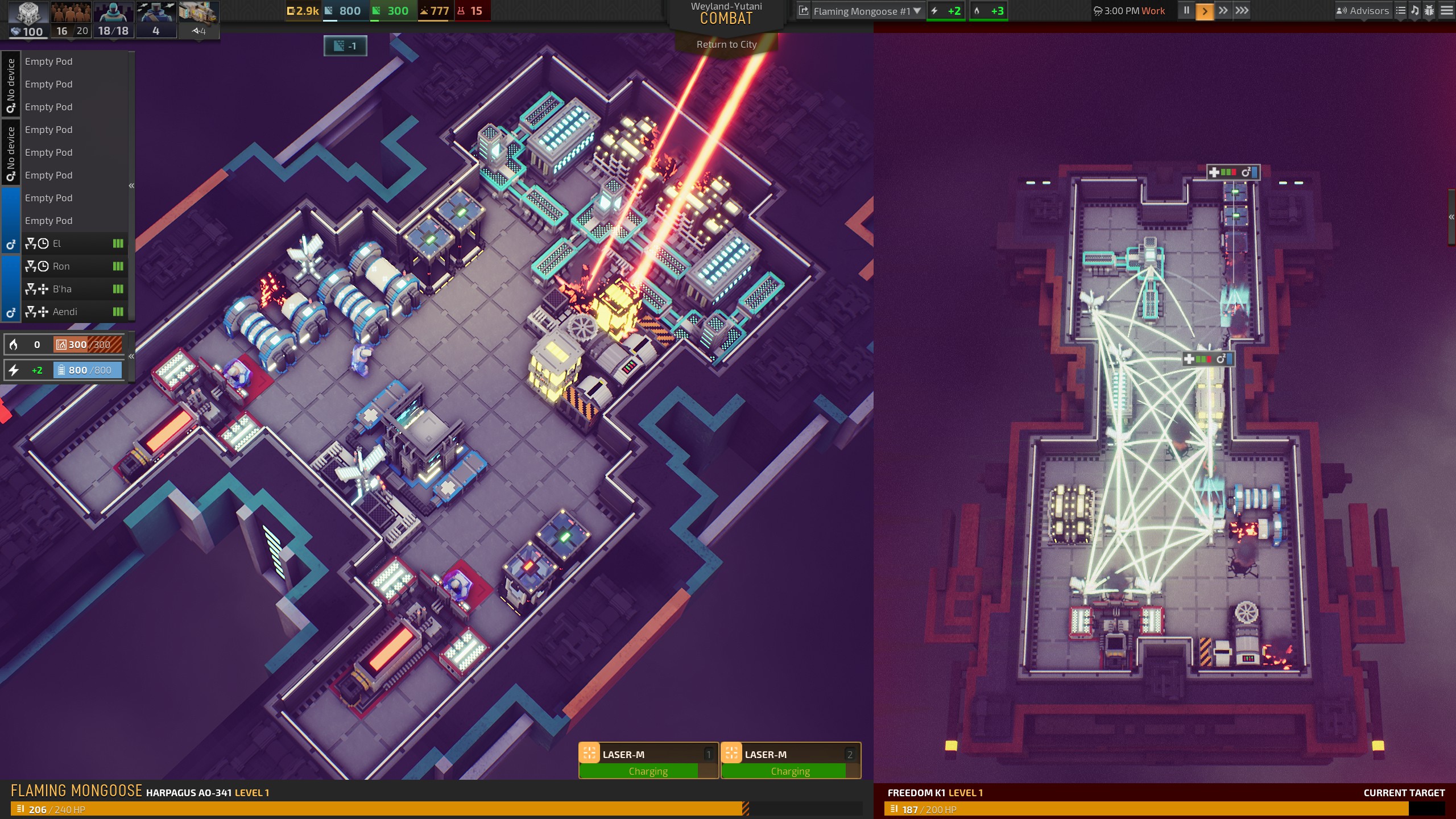 It is hard to fit so many things on a small space. Even with a bigger ship, guns get bigger, taking up space, too!

Now in no way do I expect the complexity of FTL: Faster Than Light for ship battles, but fans are already asking about ships fighting 2v1 or being able to manually focus on ground-based targets. Outside of ship fights, I have to move to an adjacent hex to my target while risking getting shredded by a gun turret. Brace Yourself Games promises to work on this more. 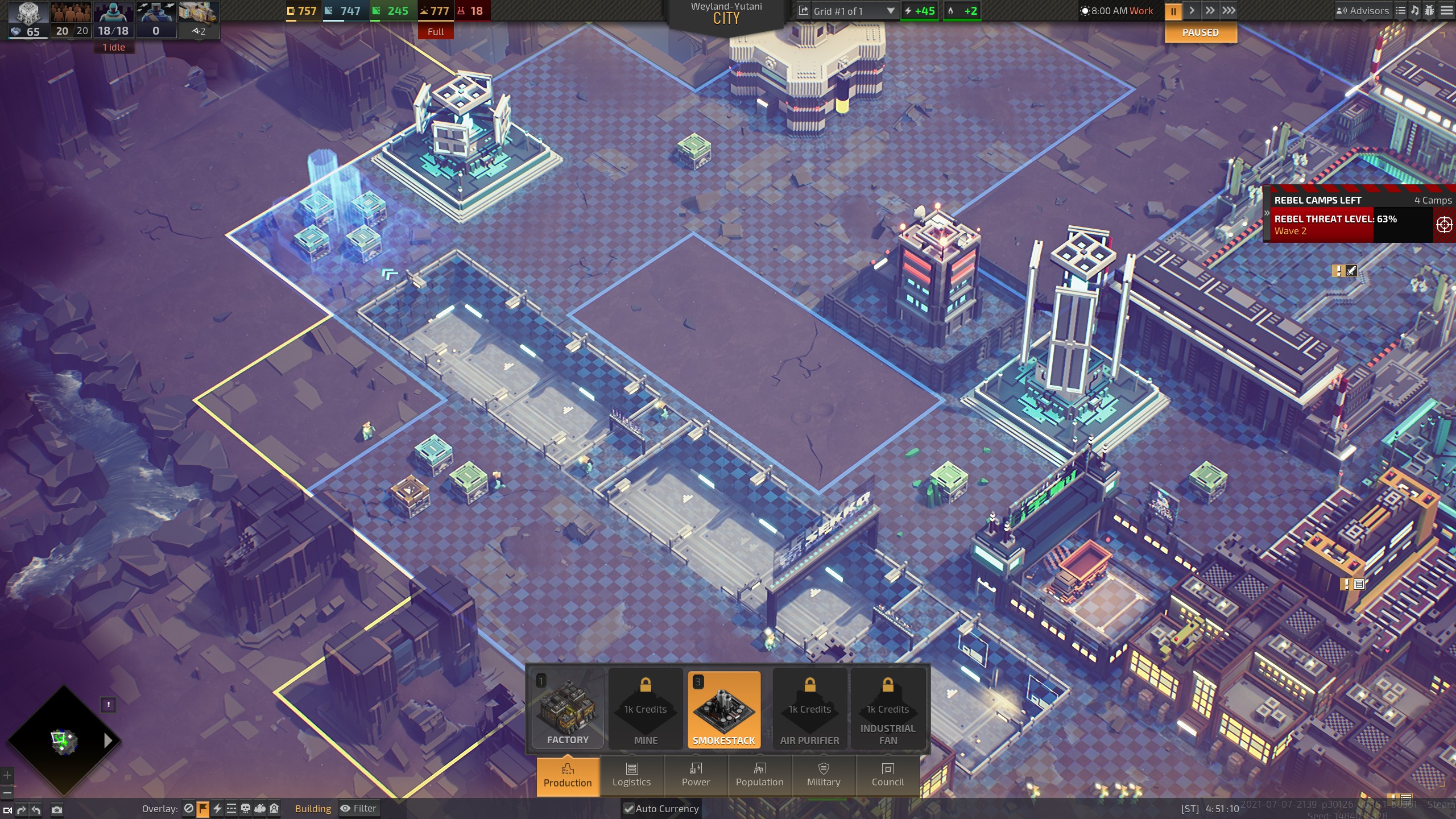 For the longest time I could not get my truck depot to deliver to the trash burning facility. This is because the road needed to connect to a warehouse with materials to burn. I will know next time!

Though I spent several paragraphs rubbing my chin, wondering out loud what exactly the devs accomplished in a year, Industries of Titan is fun. There are enough features here to warrant a purchase, but I would say this for people who have already played through Rimworld and are looking for something different, because $30 is something of a standard price for simulation games when they are finished. After all, if one reads the game’s blurb on Steam, it reads, “Compete with the other rival corporations of Titan for resources, territory, and power.” Rival corporations are not in the game yet! At least they did not show up in my game. 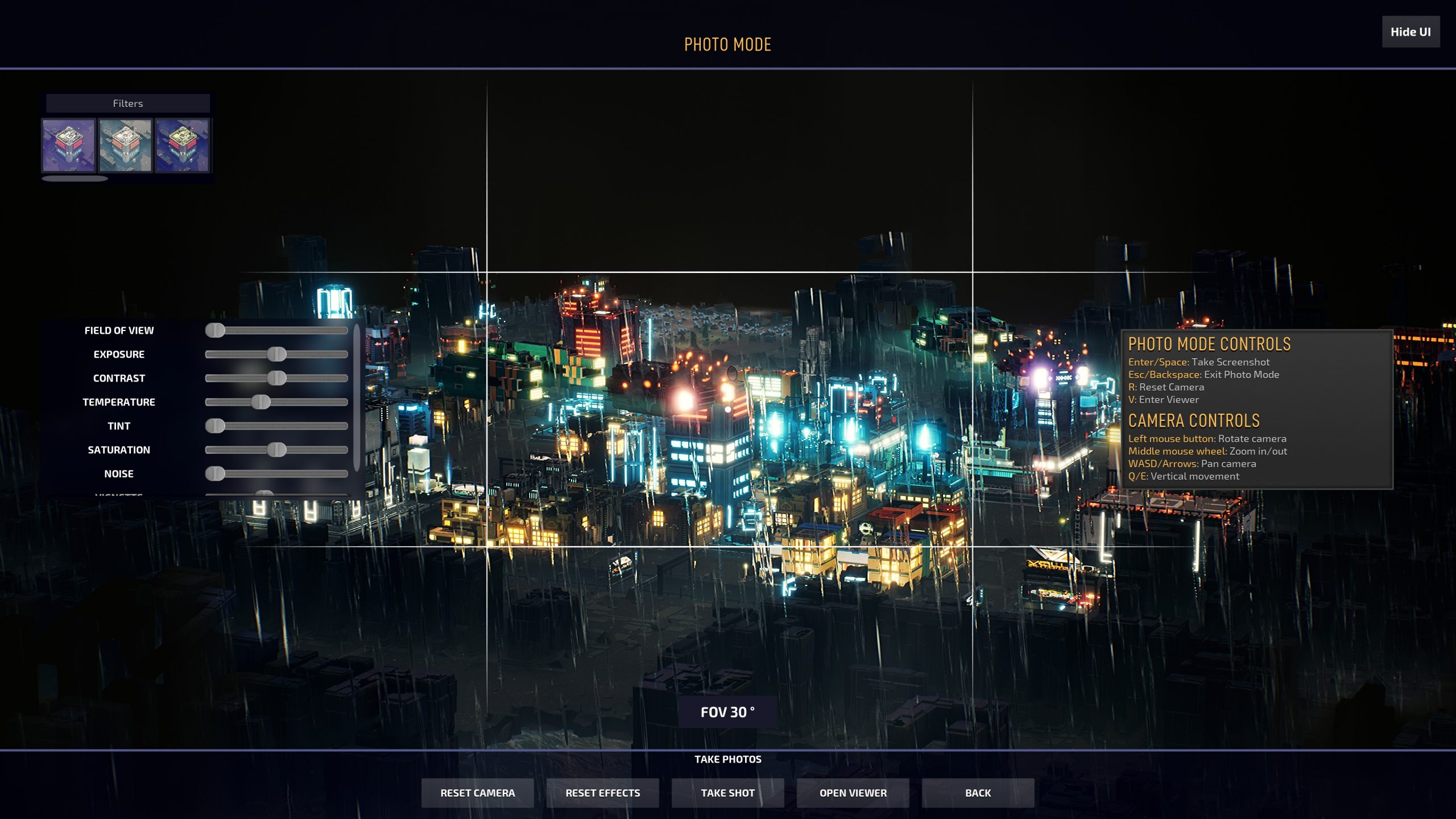 Some people have created some great screenshots in photo mode. I am not one of those people.

If Industries of Titan offered more robust features to keep players busy besides timed rebel invasions that spawn from the edges of the map, I would encourage prospective players to dive in, but its current price is steep compared to its competitors, even though its voice acting for NPCs is stellar, and a feature I have never seen before in my sims. Whatever our readers’ decisions might be, I look forward to returning to my Weylant-Yutani colony when Brace Yourself Games finishes their roadmap. 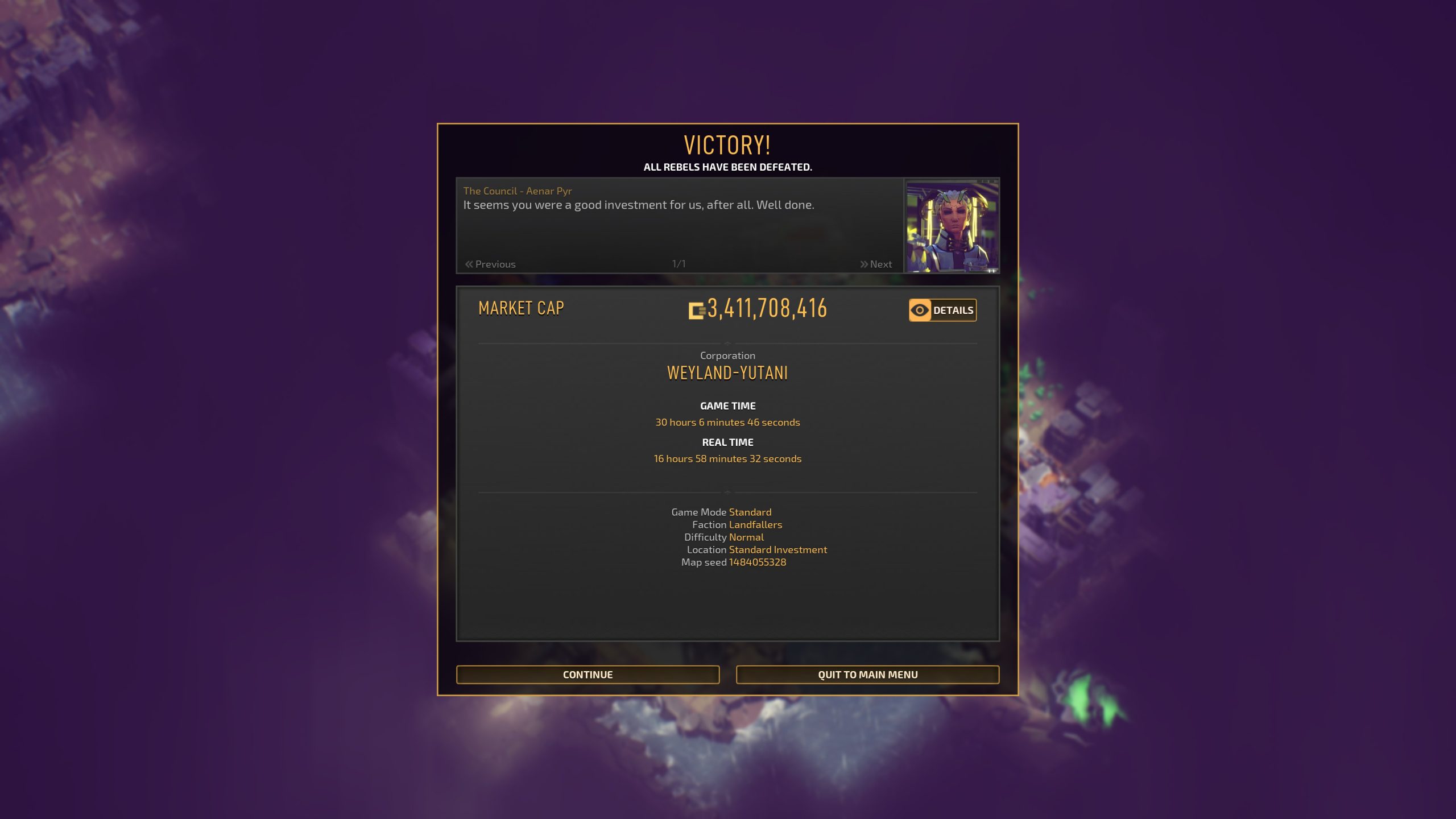 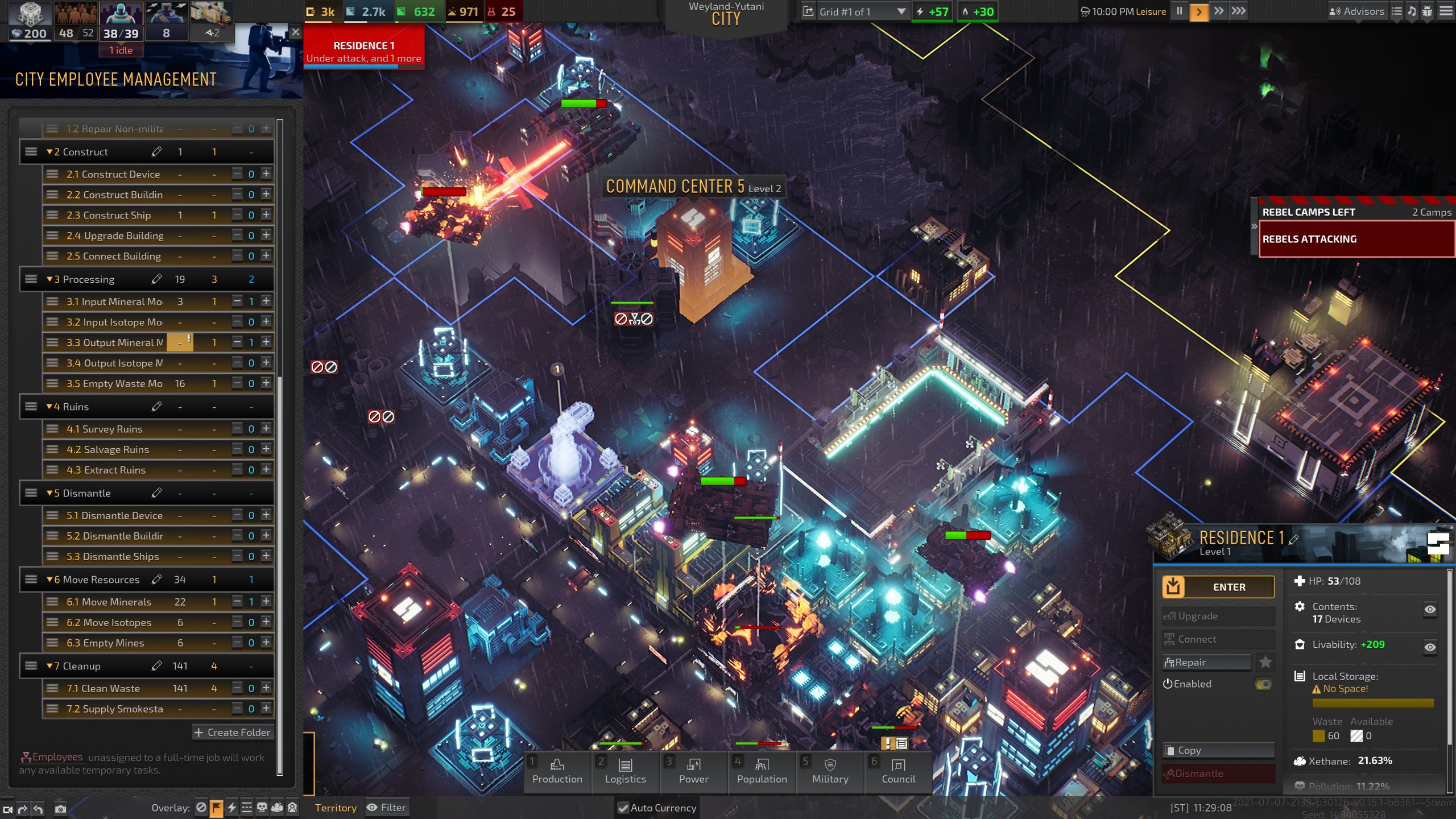 …because this post-game rebel invasion made me quit. Spawning ships off-screen is unfair, but hopefully, it is a placeholder for future endgame challenges.